Climbing Skywalker (5.8) in Memory of Will Ungar

Posted on November 2, 2022 by Sonia Landwehr 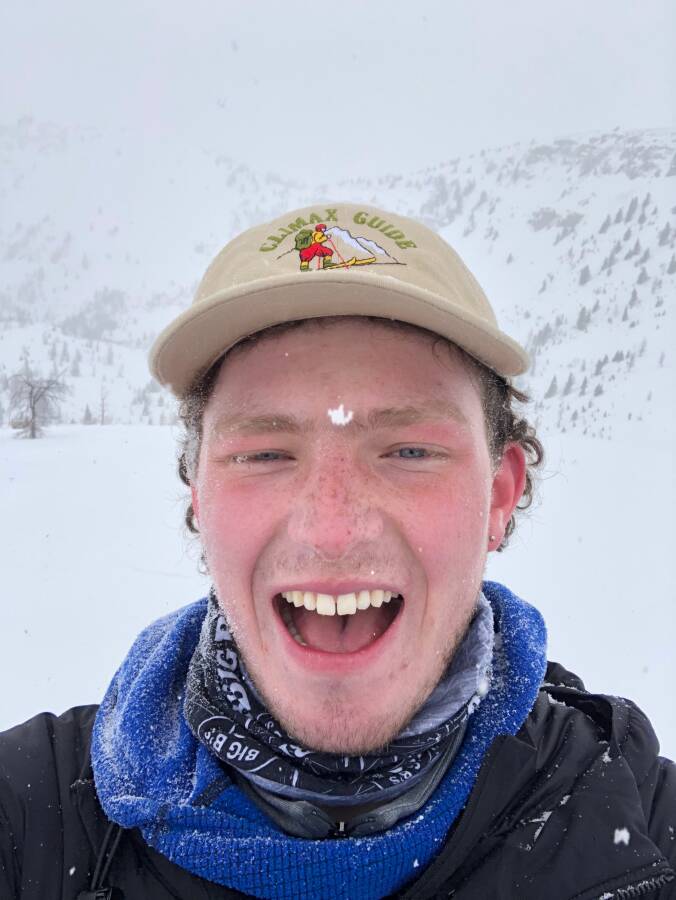 Will in his element, he was an avid skier in addition to truly any outdoor pursuit

On September 2, 2022, our friend Will Ungar passed away in a climbing accident. There is so so much that could be said about Will, and much has been said on this site: https://www.kudoboard.com/boards/KWyOuHxk which is where his family has asked people to share stories and memories of Will. We’ll include some details about what a beast/legend Will was in this report, but the website above really takes the cake.

Henry Stensland and I wanted to climb a route in Will’s memory, and enlisted Evan Wong and Avery Soule in our plans. We decided on Skywalker (5.8), a Shannon Falls classic in Squamish, as Will and his friends from home made it iconic this summer with their nude ascent. Though we were not bold enough to repeat that particular aspect, we felt that it was a fitting route. After renting the VOC’s rentable trad rack upon Avery’s inquiry of how we were going to climb with 2 parties and only a triple rack (thank you for being smart Avery), we split our group up, having Avery and Evan climb in a group, and Henry and myself go up after. Evan had volunteered to take pictures, both because he’s great at climbing film (!) photography, and to send to Will’s family. 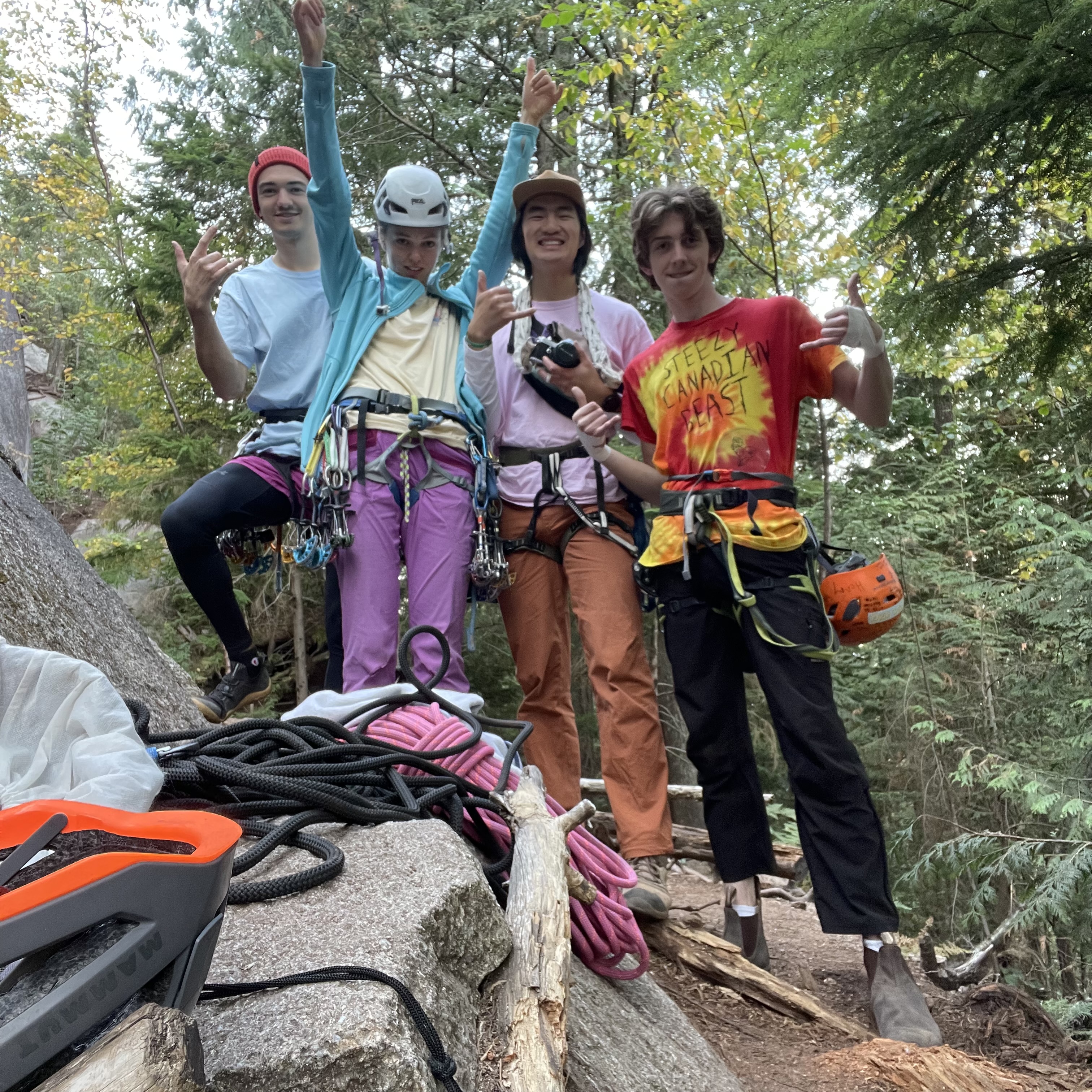 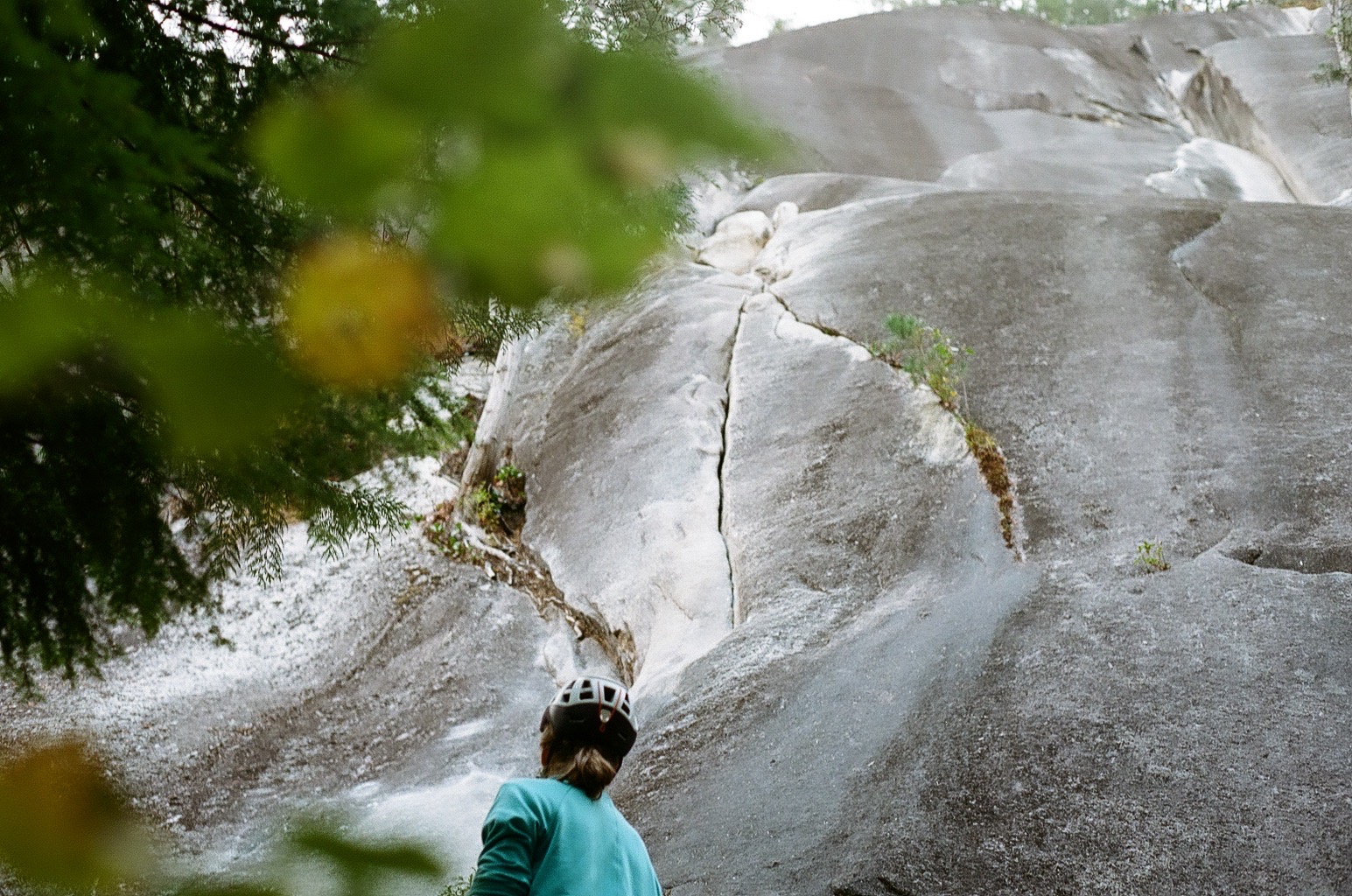 We had donned our most colorful clothes (I had stolen my sister Fiona’s shirt, attempting to have something of hers along as she couldn’t make it this weekend sadly), trying to measure up to Will’s epic style, but likely falling miserably short of that task. Henry had written “Steezy Canadian Beast” on his shirt, a reference to one of Will’s legendary and maybe somewhat ironic nicknames given that he was from Colorado, along with a sticker made by Will’s sister Caroline, that had his multitudes of other nicknames printed on it. Pausing after the approach for a group picture, up we went with 2 lines plus Evan’s static line he could ascend and descend as necessary. This created zero faff at all as I’m sure you can imagine. Luckily we were the first groups to get on the route, especially as we took our sweet time on pitch 2, with Avery opting for the notoriously sandbagged 5.8 crack, and me opting for the mildly runout 5.10a variation (including stepping on a bolt) because I didn’t feel like jamming. I appreciated Henry saying “that’s so beast” and variations of this sentiment while I climbed, which definitely helped me refocus, and think about how Will would have been so stoked at being there. Evan, a seasoned indoor crack climber and seasoned outdoor not-crack climber, discovered the wonderful pain of foot jamming while scuffing a backpack along a wall beside him. Henry, a fresh Rock 4 and taught-trad-by-Sonia graduate, got to assess my questionable placements as he cruised up, avoiding getting clobbered by his Blundstones that he had attached to the outside of our small pack. – Blundstones are great but getting hit in the head with them over and over while climbing a constricted crack sucks. Was kind of hilarious though. – Henry 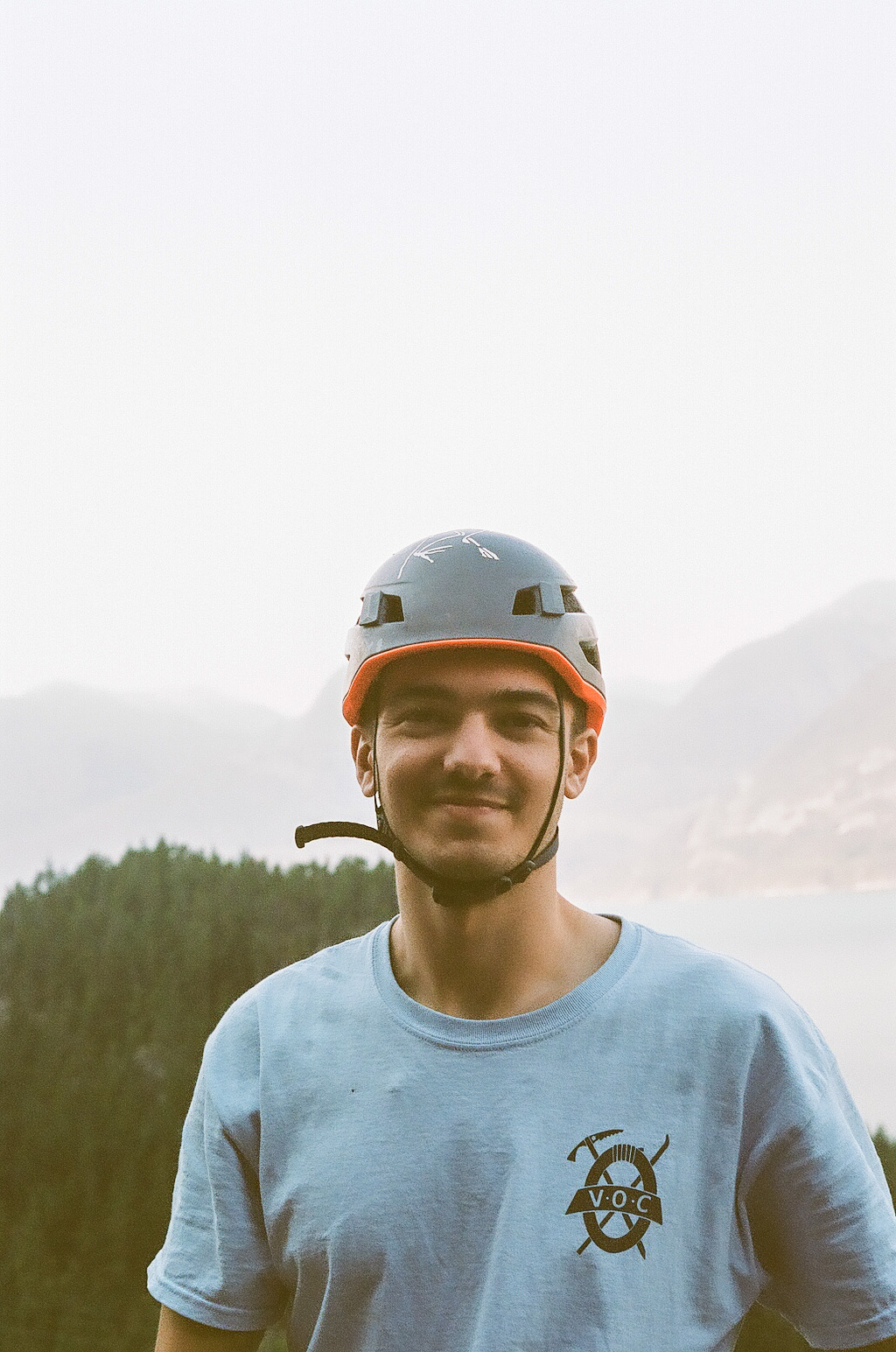 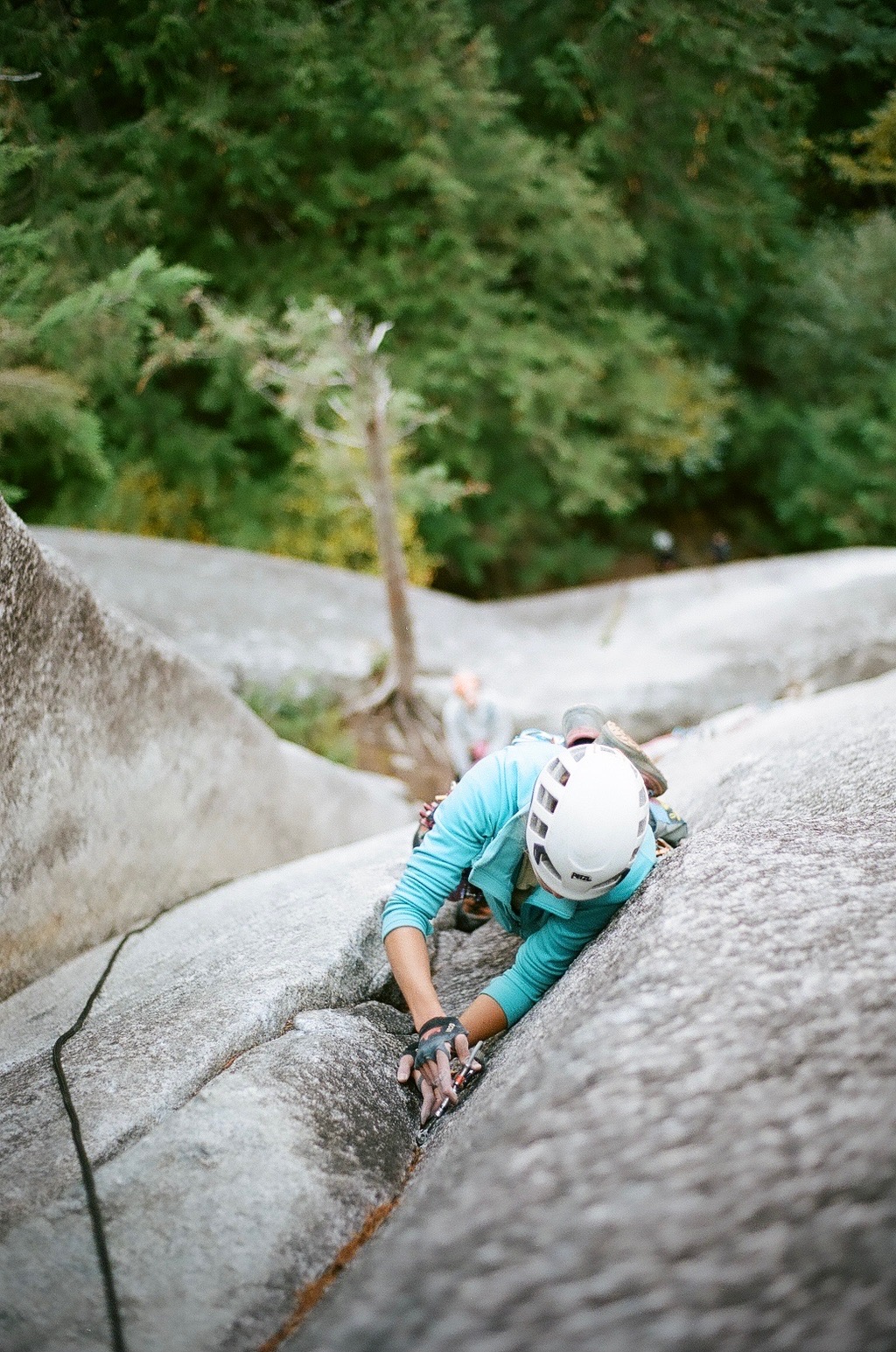 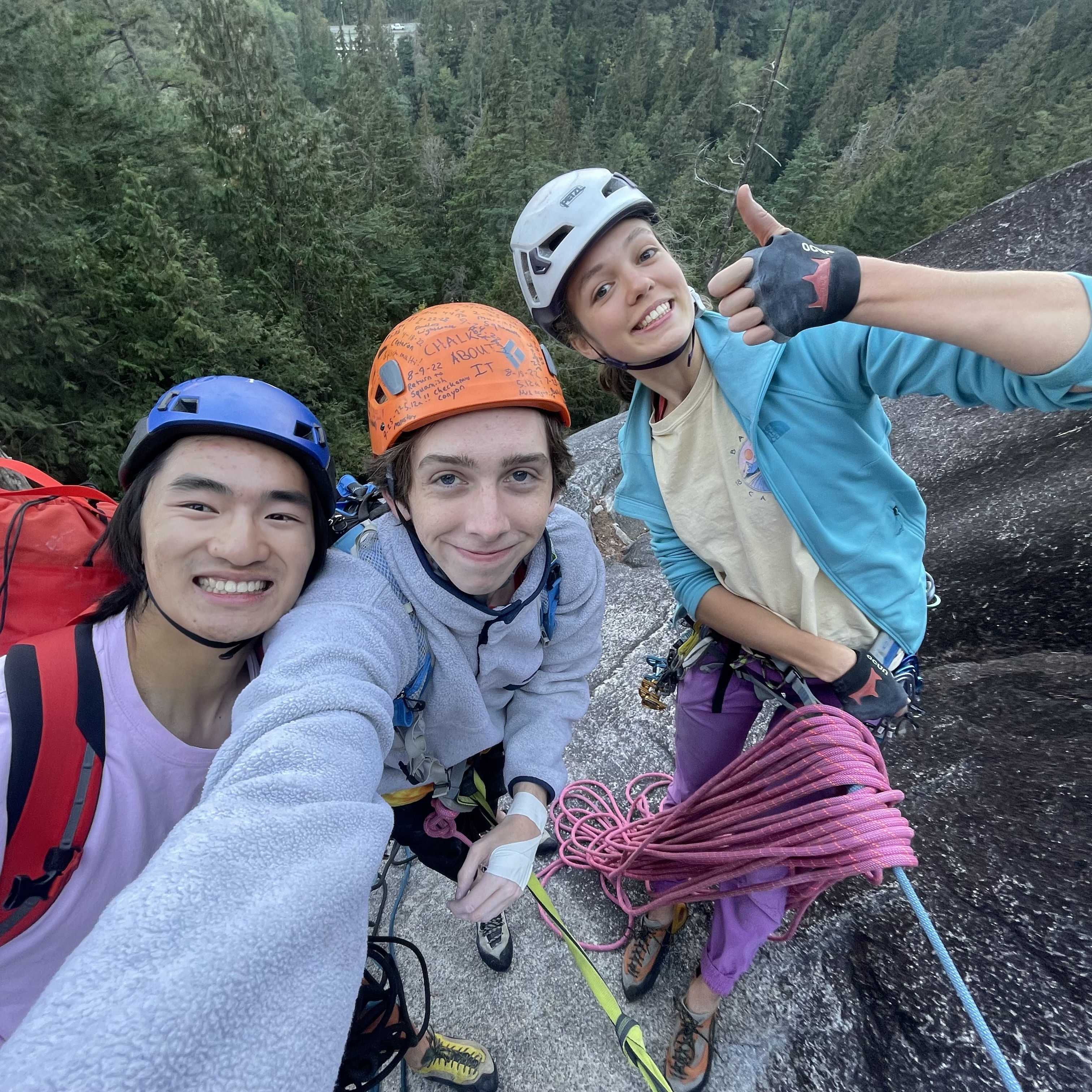 It was nice to hang out at the belays for a bit and chat, as we wanted this climb to be for reflection and memories. We spent a lot of time joking about the simple joys of [insert literally anything here] and also talked about deeper topics, which felt fitting to Will, who balanced wit and humour with profound thinking and debate. 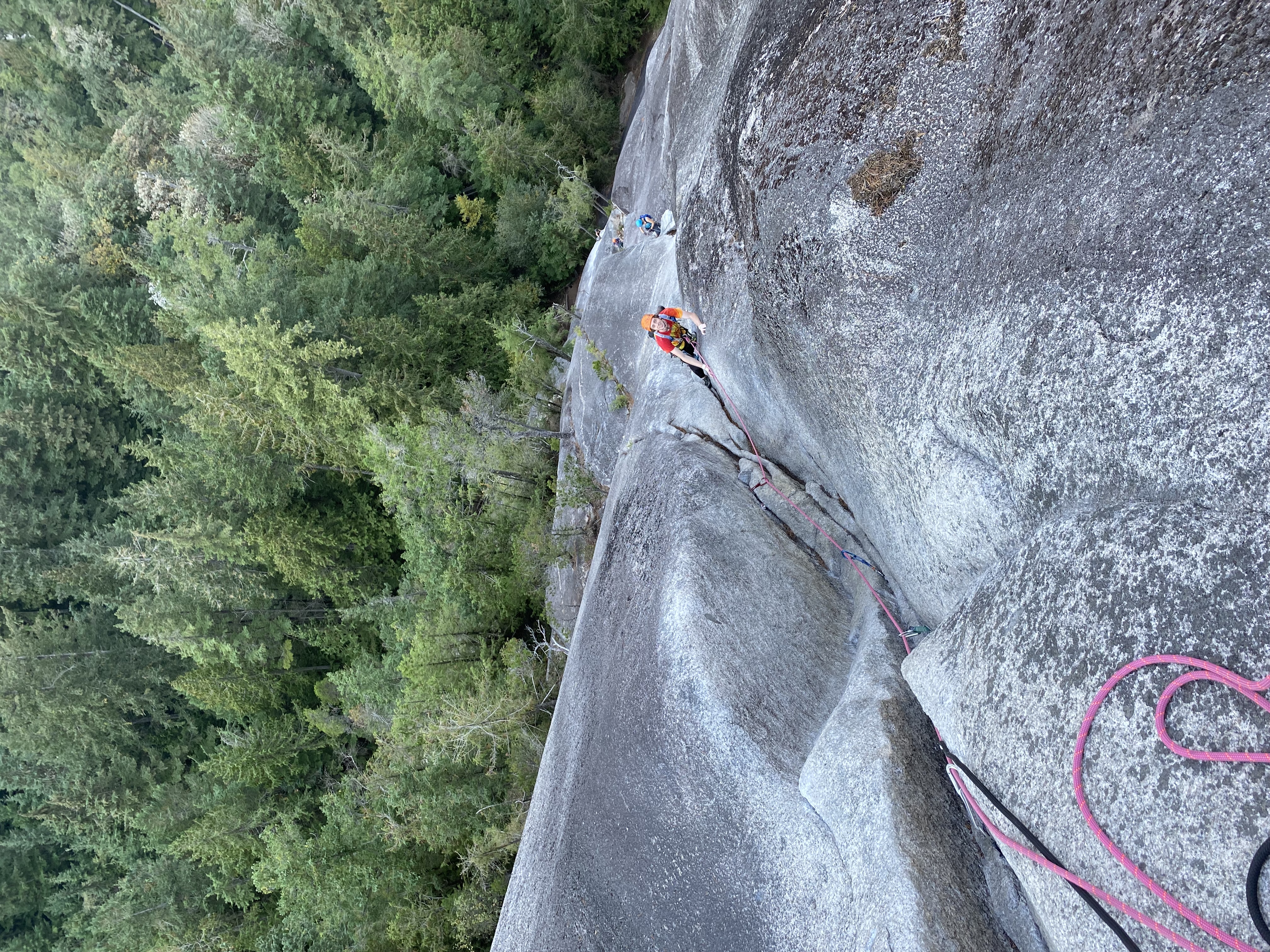 Pitch 4 was the money pitch, as I’m sure anyone who has climbed Skywalker can confirm, with an epic and exposed traverse. For me personally, this pitch was the one I thought about Will the most on while climbing because of the iconic pics of him on it this summer that just stuck out in our memories as well as it just being a great bit of climbing that you could really enjoy the process of. Henry had a nice moment with someone who was in a group behind us:

[I met this lady from England and she asked me what my shirt meant and I told her about the purpose of the trip. She instantly was so comforting and said she really admired the trip and what we were doing to honour our friend. One thing she said really stuck to me in particular. She said in response to my confession of being unsure about climbing after I heard the news of Will's passing “if you were to stop climbing, who wins? Nobody. Keep climbing and keep his memory alive.” I knew I was bound to cry at some point and this quote made me really tear up.] Simple joy of a through the legs peek-a-boo 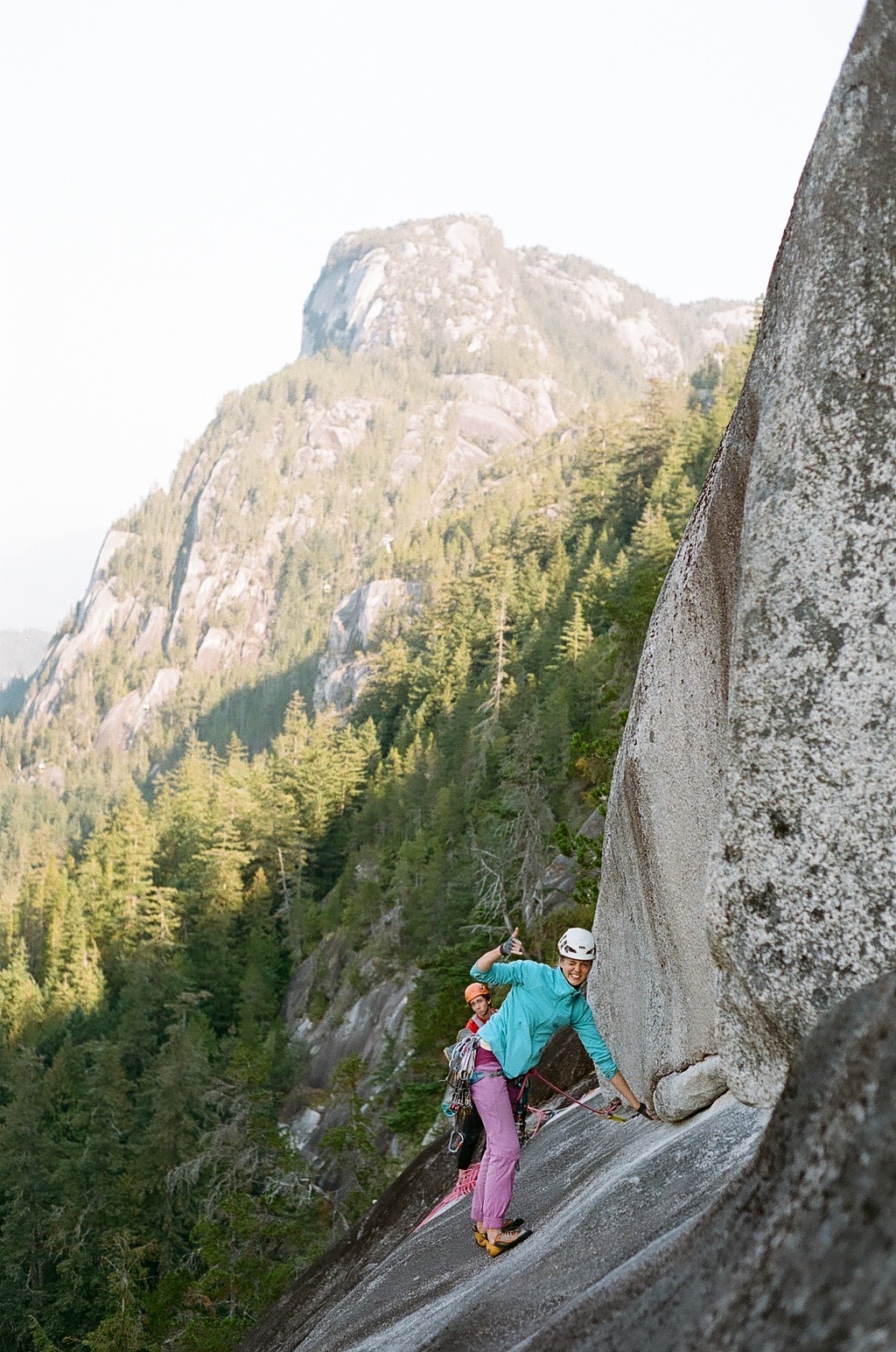 Simple joy of the first light on the Chief (pic: Evan Wong) Evan quickly snapped some pics of me and Henry on the traverse and fired up his static line before he and Avery got out of that belay station so that we wouldn’t hold up the groups behind us, and Henry heroically led the final pitch, with a bomber #2 and some spider man theatrics as he ascended the slab. Simple joy of a summit picture Before going back to the car, we walked up to the pools at the top of Shannon Falls, and following Avery’s bravery, Evan and I also went for a dip in the extremely cold water. Henry was a dutiful photographer and also rescued my phone when I dropped it down the rock towards the falls. This was a really good place for us to stay for a bit and reflect. As nice as it was climbing, we were mostly focussed on the climbing and systems, and it was hard to dedicate thorough thought to Will. It was gorgeous up there, as the water had smoothed out the granite into curved, beautiful formations, and you could see the Howe Sound and Squamish. We thought about how much Will would have loved it up there, and hoped he had in fact been up there at some point. Although it’s hard to find peace or comfort in the midst of something this devastating, I think we did find some closure here, and I suppose that was the importance of doing a trip like this. I could go on and on about the could haves, should haves, and “I wish”es that surely many of those who met Will are experiencing, but I’ll leave it at this: I wish you could have been there with us, Will. I’ll do my best to channel your never ending stoke into my future adventures, and to always be a beast. One Response to Climbing Skywalker (5.8) in Memory of Will Ungar