It was another weekend full of fun adventure for the Mt. Baker crew. We had great snow, great weather, and great times in the hut. Here’s the story from my perspective:

Saturday most of us arrived at the parking lot sometime between 9 and 10 and started skinning up to Herman Saddle. At the saddle we took in the views and split into several groups based on experience and desired output level. Kimble, Greg, Sabrina, Artem and I wanted to make a loop of Table Mountain, get some runs in, and do some recon for Sunday. We stopped to watch and talk with some people who were digging a test pit and discussed the snow profile. The snowpack was approximately 120cm deep and sliding was observed 8cm down (new storm snow) and 20cm down (also new snow) and then was fairly unreactive down to 80cm where prying with a shovel resulted in a massive failure on a rain crust layer.  We traversed west above the north side of Iceberg lake and then dropped in. Skiing down to the lake we found it slushy about 30cm down but supportive so we avoided the center of the lake and took the long way around. 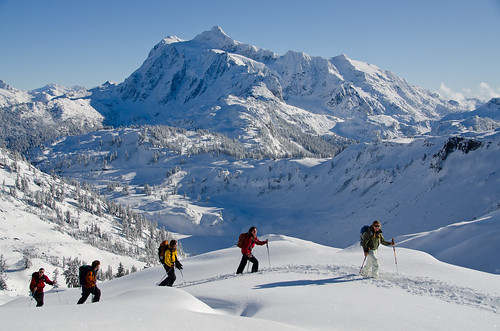 On the other side we were greeted with an inspiring view of Baker and Ptarmigan Ridge and were giddy with all the options for great runs.  We got some excellent runs in on the west flank of Table Mountain and the nearest portion of Ptarmigan ridge before heading back to complete the loop as the sun began to set.

We ran into a group of four, two couples, with a dog and discussed how beautiful alpine glow on Shuksan was. We all crossed the south side of Table quickly and got our skins on. The plan was to drop into the chutes near the east arm of Table, ski down to Bagley Creek and skin out. At some point we become widely spaced out as fatigue hit us at different times. Artem and Sabrina were having some equipment problems and were a little behind. We were getting very cold on the top as well as hungry and thirsty. We didn’t stop to eat lunch so all I had eaten all day was a cliff bar and some cliff power chews (courtesy of the clubroom). Artem arrived and after waiting wondering where Sabrina was we saw her over a rise southeast of us and called to her. We thought she said “I’m coming down to you” to which we replied “Ok, come to us.” Sabrina then disappeared and we waited. And waited. And then started calling her name. No answer. It was almost fully dark now and we were shivering in the wind as a cloud started rolling in. Finally we saw a headlamp and called “Sabrina!” A reply came and the figure started making her way over. Not Sabrina.
“Have you seen our friend Sabrina? She was wearing white ski pants.”
“No, I’m Sahara, I thought you were calling to me. Have you seen the couple with the dog or my friend Nelson? I’ve lost my group and this is my first day in the backcountry, can you help me get down?”
“Sure.”
At this point we figured Sabrina had followed the ridge down and taken the cat track out. Greg had no headlamp so he and Kimble when down to scout the run. We knew there was a cliff/steep section but did not know where we were in relation to it. Artem and I patiently and painfully waited for Sahara to make her way down. She was very frightened and tired and not an experienced skier. She told me she learned how to ski last year so I didn’t expect it to be that bad, but learning and knowing are two very different things. We found the cliffs and traversed away from them and after a very long time we made it to the bottom and got ready to skin back to the parking lot. It was probably about 6pm at that point and pitch black out. We were supposed to have met at the cars at 430 so we were anxious to get back to our group and make sure Sabrina there.  We very badly wanted to be warm and full of food. I had brought my radios and distributed them among the groups but when the batteries get cold and the voltage drops the radio doesn’t have enough power to transmit so we could not communicate with the others. Sahara hadn’t figured out skinning yet and was walking pigeon toed with her skis on despite our repeated efforts to convince her that gliding would be faster and less exhausting.
It was a beautiful night despite the cold and Artem was inspired to serenade us with some Russian folk singing, perhaps to encourage Sahara to go faster. We could hear the others on the radio and it sounded like some cars were going to leave so I sent Artem speeding ahead to make sure that everyone from our group was accounted for and would have a ride. Sahara and I were just about at the parking lot when Artem came back and said “We have to go back and find the other guy in their group”
“Ok.” I said, “but I was so close to the cars!!”
We went back out calling the guy’s name and blowing a whistle. Artem’s skins eventually failed completely and we were not willing to split up and expose ourselves to more danger so we discussed what to do. Luckily Craig got us on the radio to tell us the other group’s last member had just arrived and I was able to transmit a response. We went back and talked to the other group. They thanked us, gave us some delicious cookies and offered us a pitcher of beer at Graham’s in Glacier if we were headed that way. We were happy we could help; last time I came down to the states we also tried to help someone, but he was not as fortunate. 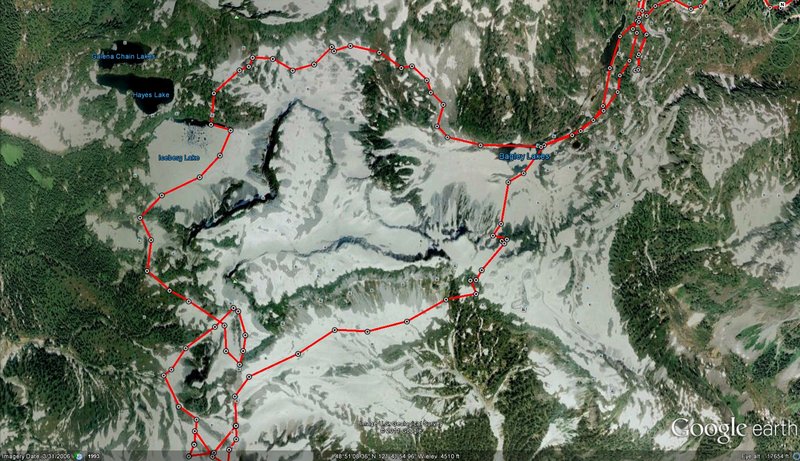 We hopped in the cars and headed for Glacier, stopping for beer on the way. The hut Ran rented was really great and everyone was happy. We had a delicious dinner (complements to the chefs!) and then broke out the guitars and the songbook and increased the rate of alcohol consumption. We had ambitious plans to get up early for skiing but did not go to sleep until very late.
After another delicious meal we cleaned up the hut and headed for the hill. Taking the cat track to traverse behind Table we headed for Ptarmigan Ridge. Some of us planned to head toward Coleman Pinnacle to ski the fresh snow on the north side of the ridge so we formed a faster party and made our way out there. We stayed high and found a great run to drop in on. It was about noon by then and I dropped in first and after charging through the first pitch of the run I ran into some avalanche debris on the second pitch. It wasn’t that solid yet my left ski immediately popped off which spun me around just in time to be struck in the head by the ski. It hit me very hard but didn’t knock me out. I was conscious but was knocked down for a bit but forced myself up so I could at least get photos of the other guys coming down: 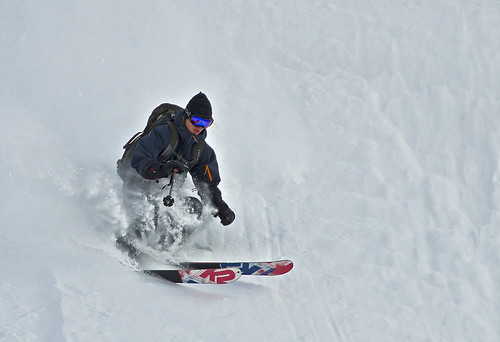 Soon after that I realised I was bleeding rather profusely from the head. I skied down. Sam sterilized and bandaged the wound for me but with all the hair and blood it was hard to say how bad it was. 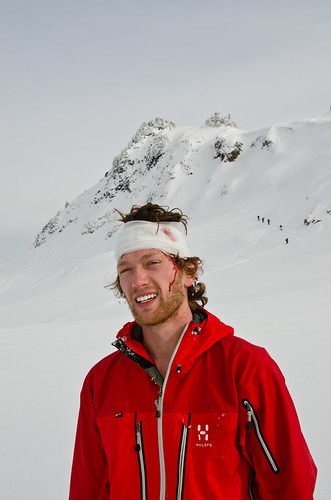 All head wounds bleed a lot so sometimes they look worse than they are, but either way you have to be extremely careful because you really just can’t tell how serious it is until you get to a hospital. Even then, you can appear to be fine and then die 4-6 hours later from rupture or swelling (as happened to Liam Neeson’s wife at Whistler two years ago). I wasn’t dizzy or nauseous, I didn’t get knocked out and I knew where I was but I had a headache, a lot of pain particularly at the point of impact and left jaw, and was feeling a bit shaken. My pupils were even and responsive. We took a break so I could recover and ate lunch and then continued on the ridge another 20minutes to ski the long fresh run we came for and then head out (yes in retrospect this was stupid). I took it easy and tried to keep my heart rate down. We ran into the others near Table Mountain and skied down together. We arrived at the cars just before 4pm. I got out no problem though I wasn’t feeling too good.

We headed back to Canada and after dropping everyone off Craig took me to the UBC Hospital ER. I didn’t have to wait long for a doctor. It was a lot worse than we thought; the doctor described the wound as “gaping” several times. She wanted to use the staple gun to ensure it would stay closed but they couldn’t find it so she settled for stitching me up. Apparently they don’t usually stitch wounds after 4-6hours. It had been 8hours but she still thought it best since it wasn’t likely to heal anytime soon on its own.  The laceration was about 6cm long and required 8 stitches. She said I have a minor concussion but nothing serious so she gave me a bunch of head injury info and lots of pain killers and sent me on my way. I had to have my roommate wake me up every two hours to make sure I was still responsive and coherent. 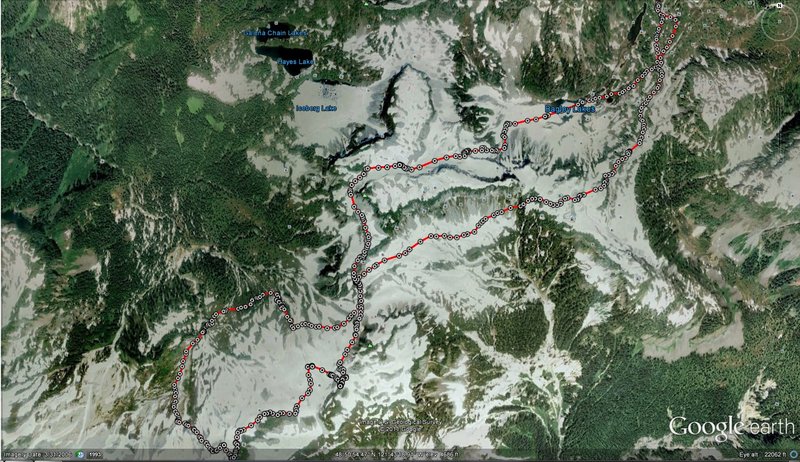 This incident was 100% my fault; I made at least two bad choices while preparing for the trip.
1.)    I knew my DIN was way too low and thus that my skis come off too easily yet I didn’t fix it
2.)     I started wearing a helmet in the backcountry last season yet I left my recently warrantied helmet in the box at home, since I “did not have time” to unbox it and fit it before the trip.

Rescues, stitches and concussions aside we had a great weekend and lots of fun. Thanks to everybody for coming out and especially to Ran for organizing and to Craig for renting the Modo van and driving!

Photos (most are also on VOC Gallery)