Posted on December 6, 2011 by Breanne Johnson

The weekend dawned early, but definitely not bright, as we were yanked from sleep by Adriana’s all too enthusiastic alarm at the painful hour of 4:40am Saturday morning. Marius, Adriana, and I piled into their car and took off at lightning speed for Pemberton as I dozed in the back. Having spent the previous evening watching the mountain episode of “The Human Planet” I dreamt of the tropical bats I would snare, narwhals I would spear, and Greenland sharks I would snag in the mountains that weekend. Although I failed in the tropical bat department, the adventure portion of our trip was not to be lacking.

By 6:50 we were in Pemberton picking up a bum on the side of the street wearing ski boots. Sam hopped in and off we went up the Duffey lake road, just as morning made its first appearance on the surrounding peaks. With minimal faff that would impress most outdoorsy folks, we were parked at the Cerise creek trailhead and on our way to Vantage ridge. Sam slunk nimbly across a river that had barely frozen over as it squeaked and cracked beneath his skis, and it dawned on me that he was perhaps attempting to personify Smudgey von Poufy Pants of the Canadian Avalanche Rescue Cat Association (see http://carca.ca/applications/). I adopted the same technique and soon enough all four of us were across, dry for the time being. 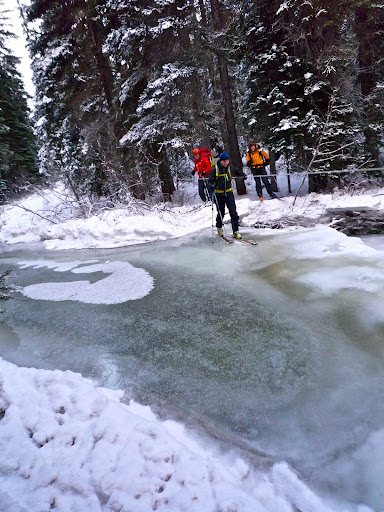 We zigged and zagged our way up Vantage ridge. Gaining elevation at a leisurely pace and making conversation with the wise old trees, as their moustaches of lichen trembled in the almost still air. The clouds sped by overhead southbound as if they were on a cloud freeway but down below we couldn’t understand what all the rush was about. By noon we were on top of Vantage ridge enjoying the view of Duffey lake to the northeast, and the friendly faces ofmountRohr, Cayoosh, and Chief Pascall. We stopped to have a look at the snowpack on top of the wind loaded ridge. Although the wind slabs we were worried about were definitely present, they were fairly unreactive and it took Sam many jumps on his Rutschblock to get it to show any indication of failure. We were happy that where it had failed was fairly deep, where trees were still anchoring it in place. Skinning along Vantage ridge in the sun, we debated whether to descend into Caspar creek and snow cave for the night in order to continue our planned route up the south ridge of Vantage peak the next day, or to ski “cheque’s in the mail” down into Cerise creek to spend the night at Keith’s hut. The lure of the hut won out for the time being and the snow cave round trip route was decidedly saved for a not-far-off future adventure. 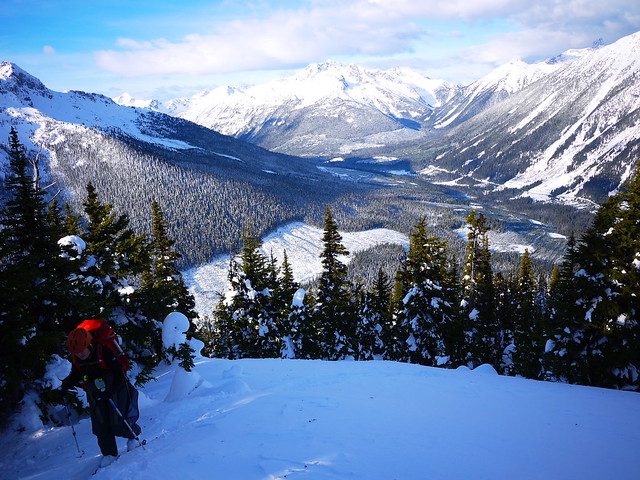 Adriana on her way up Vantage Ridge 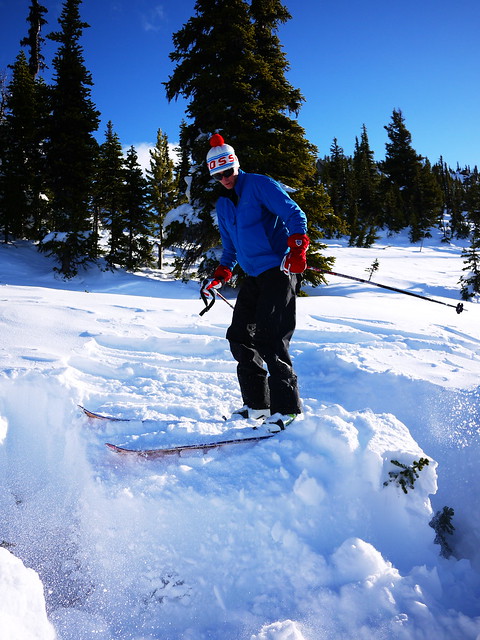 Finding a bit of powder to ski in the trees, we whooo yipped as we descended towards Cerise creek. Sticking too far to the right we soon found ourselves unexpectedly in the lower portion of an avalanche gully, having no choice but to continue descending down the sun baked side. As I side slipped down, sending wet snow tumbling ahead of me, I willed the mountain above to hold onto its snow even though we had deemed it safe enough. After surviving the tropical side of the gully, we found ourselves in the lower portion where a previous avalanche had run out, and concrete balls of snow lay ready to trip us just beneath the surface. Thrilled to have reached the valley bottom, our excitement was short lived. The alder jungle, not yet fully covered in snow, had to be navigated to get clear of the run out zone. We all adopted different techniques. Marius slid on his bum beneath and along the alder, dragging his skis. Sam left his skis on and somehow managed to walk along and through it. Adriana and I tried to crawl and walk, pushing or pulling our skis up, over, or around branches. It proved impossible to make our way across the slope with all the alder pointing down slope, and at some point I gave up and stood in the thicket, branches criss crossing my view, with snow falling down my neck, a pole snagged on a branch, my sunglasses fogged up, and my legs trapped in an alder snare looking longingly at the forest mere meters away. Downhill we went at a snails pace and I found the very best strategy was to think of Smudgey Von Poufy Pants, which pretty much put the ridiculousness of the whole situation into perspective and had me laughing despite the snow down my neck. Smudgey would come to my rescue a few more times before the trip was up. 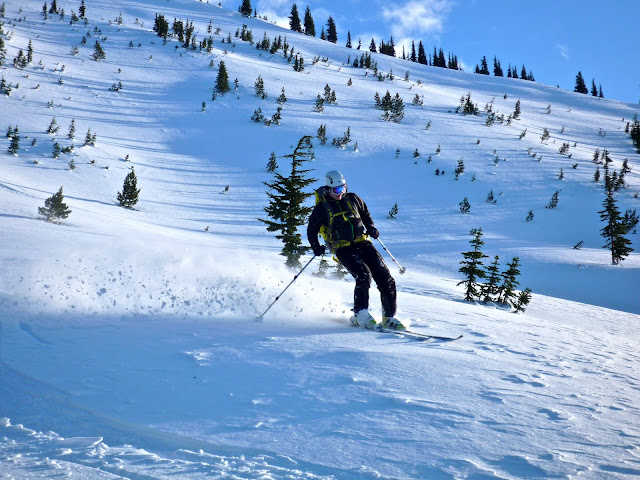 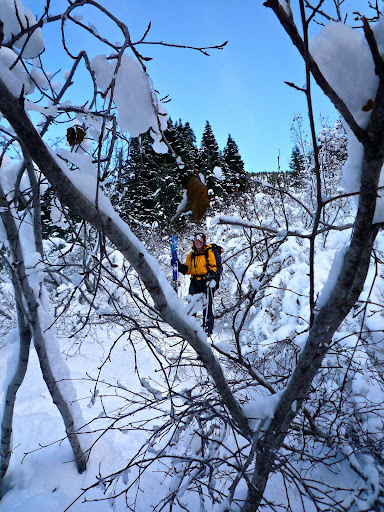 Finally out of the alder, we joined up with the trail up Cerise creek to the hut, and waddled along next to a few Ptarmigan who are definitely the masters at winter waddling technique, leaving snowball like tracks behind them. The hut was teeming with life so soon after cooking dinner Marius, Sam, and I headed out for some moonlit turns on Joffre. Arriving back at the hut we began piling snow into a massive dome to dig a snowcave for the night. I have to say that our snow piling skills are top notch, but we made the mistake of heading back inside to wait for it to settle. A half hour later, our enthusiasm for sleeping outside had rubbed off on a few others and we found the loft to have just enough space left for us. Perfect. We were pretty happy with our snow mountain in the state that it was in. No need to hollow it out. We enjoyed a rare snore-free quiet hut night. It was exceptionally quiet for a hut of 20+ people. To the extent that my polar bear watch self would wake up periodically to wonder if everyone had spontaneously disappeared in the night. I kept glancing over at the window to make sure we weren’t all suffocating or something.

Sunday morning had us skinning up towards the col between Vantage and Matier. Adriana and Marius opted for a mellower route while Sam and I boot packed up the steeper upper part of a moraine and traversed around the lower slopes of Matier towards Vantage. Seeing Richard So and co. gaining the col behind us, we left our skis in position to ponder the slope they would descend later, and continued scrambling up to the peak. A real gathering took place on the summit and we realized that Vantage was aptly named with Mt Chief Pascall, Joffree, Matier, and Howard lined up in front of us. 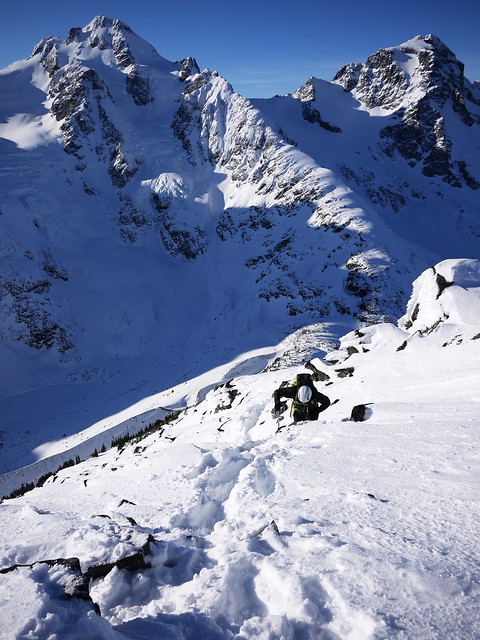 Marius on his way up Vantage peak

The way down was fairly uneventful except for a moment when I found myself perched on a rock next to a steep couloir asking Marius how he had gotten across and down into it. “Jump” he said. Ah right, of course. After a few minutes of pep talking myself and eventually realizing that Smudgey Von Pouffy Pants would do it, I made the leap. The ski down was marked by not a single tele turn and one particularly good bail on my part as I skied from wind slab to wind crust. Skiing down the trail from the hut, after retrieving our gear, proved to be a ridiculously good time. Dodging trees and narrowly avoiding creek plunges as we turned corners on the luge like trail. I felt like I was a kid in the Whistler kids park again, left to go plummeting downhill along forest trails for the day. 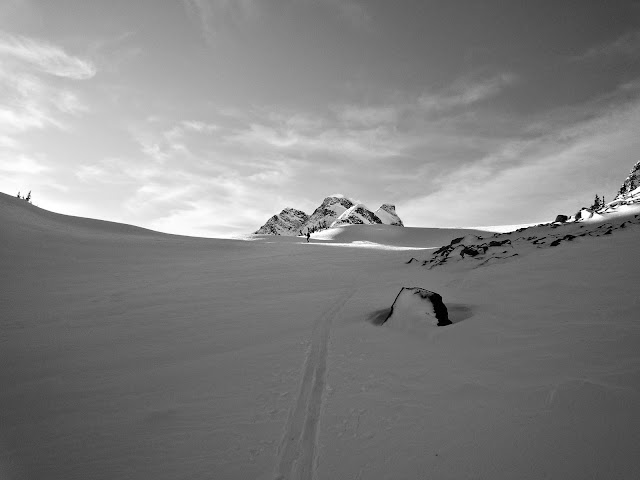 A stop in Pemberton to drop Sam off (still clad in the ski boots I don’t think he ever takes of) and beers and pizza at the Brew pub brought us back to Van, where my adventure was not yet over. A skytrain and bus ride back to Surrey found me among throngs of Canuck game go-ers. No one seemed to mind my soggy pack in their face or my skis dripping onto their lap, and they found it fascinating to find out that I had been skiing instead at Hogwarts Hill or Sasquatch Slopes instead of the Whistler they all presumed. Luckily the cramped Expo line and tousle of half drunk people allowed me to avoid further questioning.