While the Friday potluckers trickled home in the early hours of Saturday morning, I set my alarm for a few hours later. A snippet of sleep, and I was suddenly zooming up the sea to sky. Having given up a nice sleep in, a mellow wander up Seymour, and a longhike party, the four of us (Nat Stafl, Nick M., Sam McKoy, and I) were off in search of the powder beast. Little did we know, he was about to eat us.

The trailhead was ominous, indicative of what was to come. Other early morning risers were cheerily chatting about the white blanket that covered the Duffey road summit. Natalie told terrible jokes. People laughed.

White fluff began to fall from the sky. It was cold and wet. What was this stuff anyways? We skied into the storm. Up ahead Natalie’s exuberantly bright toque bobbed, Nick’s pack emanated spot signals to cyber space, and Sam strode swiftly through the forest which was slowly suffocating in the white blanket. 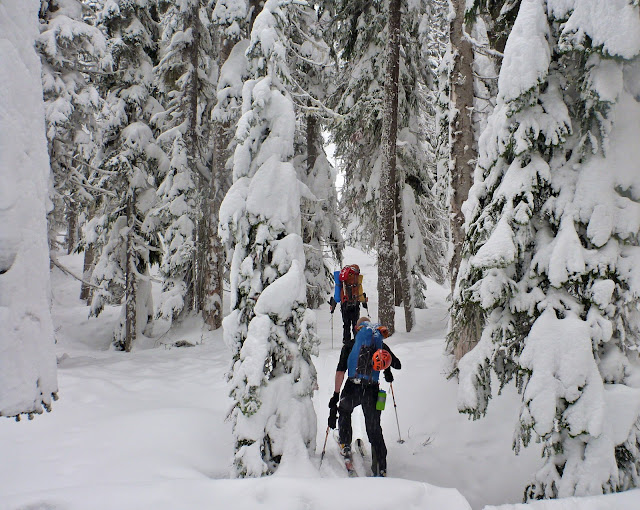 Branching east off the trail to Marriot basin, we began climbing up towardsRohrLake. The atmosphere of gloom intensified as Nat hogged all of the trail breaking to herself. The rest of us were left behind to enjoy the terrible view of mountain peaks occasionally peeking out in blue patches through the clouds thick with falling flakes. The slopes in Marriot basin and above us on Mount Rohr were that terrible shade of pure white, smooth and speckled with gnarly trees like gnomes sitting around with nothing better to do than hoard their own little piles of powder. 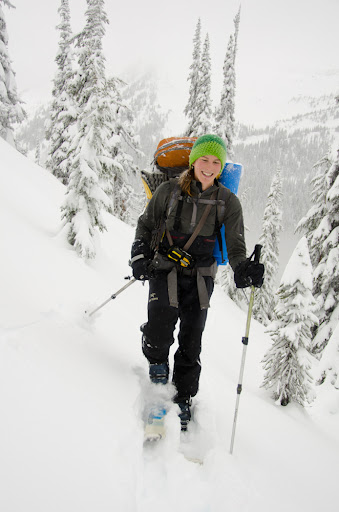 Nat enjoying life. The grin is false. Of course we weren't having that much fun. Photo: Nick Matwyuk

A snow pit revealed excellent stability in the trees. We all secretly cursed for having to ski this white stuff after all. Personally I just wanted to sit down and sulk in the face of all of these snow gnomes and their intimidating mountain lair.

Run after run, we got eaten one by one by that powder beast. 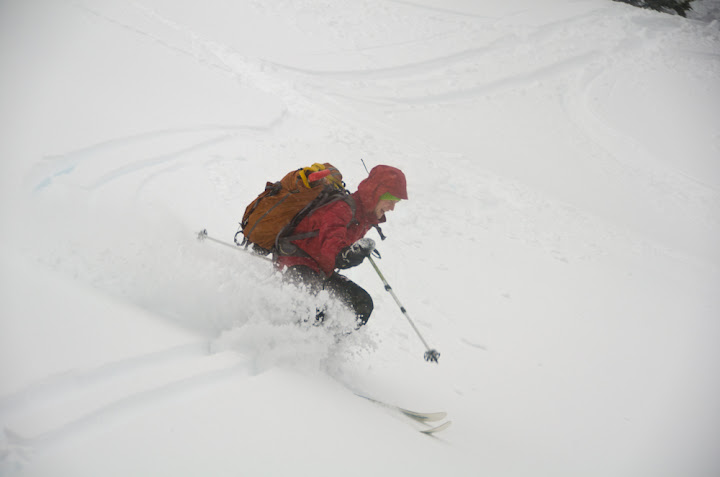 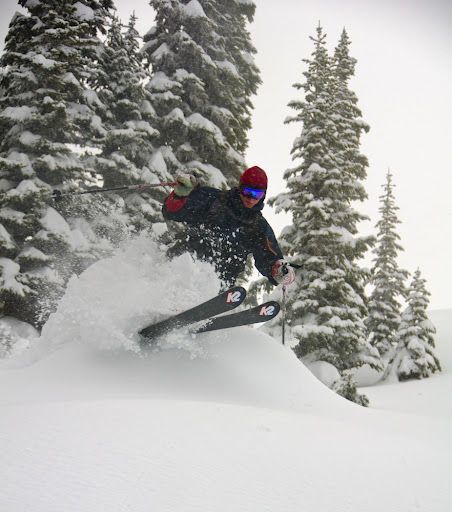 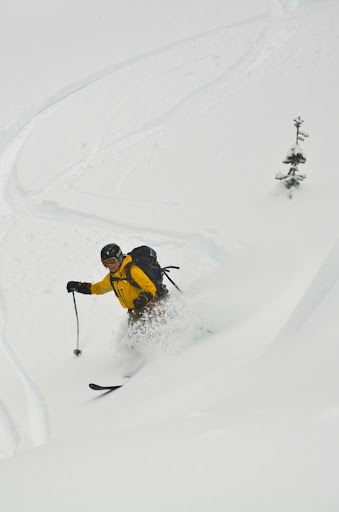 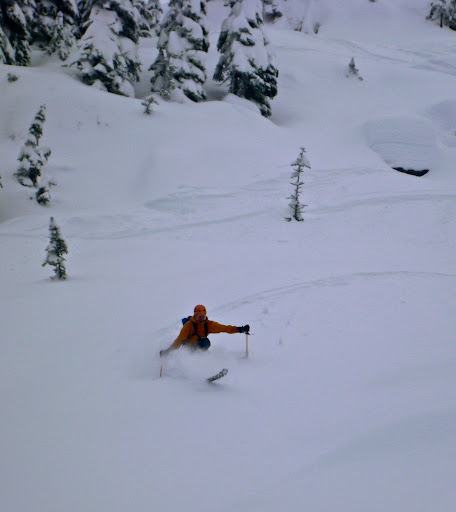 Nat and I almost drowned from face planting a few times. 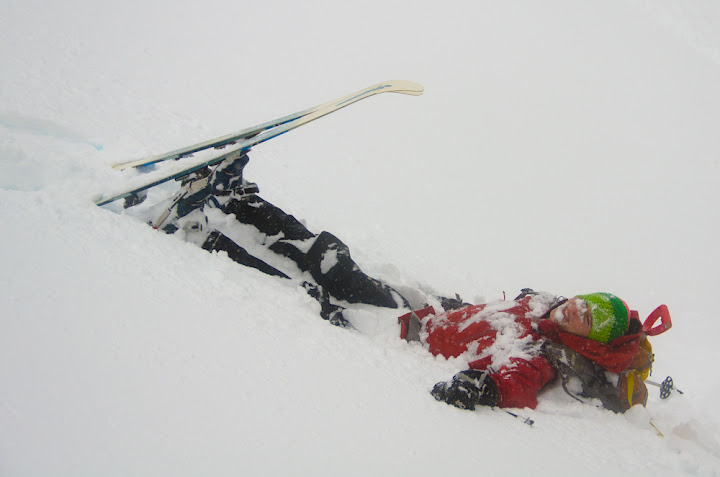 Nick certainly should have brought a snorkel, as I’m pretty sure he had to hold his breath for entire runs at a time. 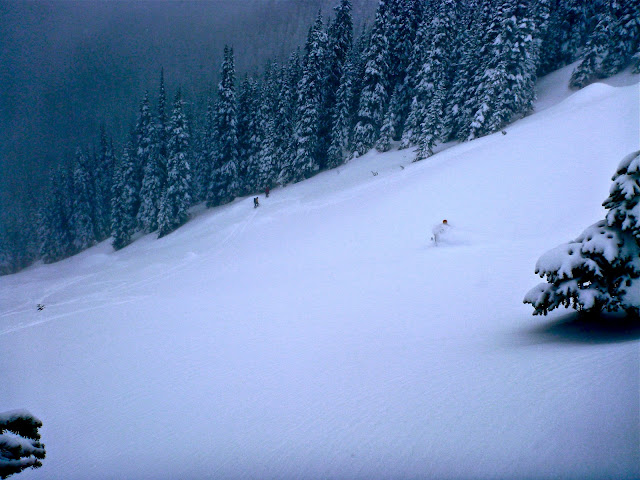 Nick is somewhere in that powder cloud. Photo: Sam McKoy

Sam tried to knock the snow beast out from above, but even his pillow fighting techniques failed. 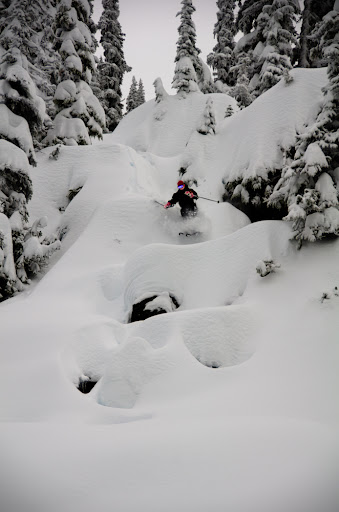 Sam knocking the pillows out from above. Photo: Nick Matwyuk

The powder grins, contagious, swept through our little group as we trotted up the slopes below Rohr Lake time after time. 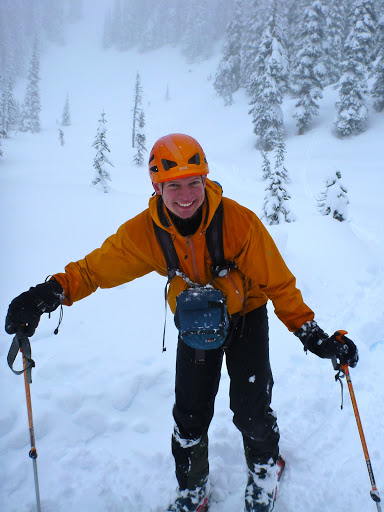 There is only one cure for this alpine affliction; food. Lots of good food. Cheese and jam baguette, sundried tomato pasta, cranberry pumpkin seed couscous, soup….at some point I lost count as we sat around our snow kitchen in the falling, blowing snow. Cozy in our down jackets we devoured course after course, the camp stove willingly roaring away for hours. 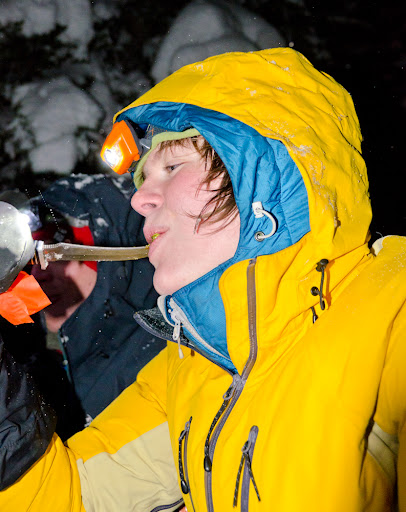 Devouring dinner on my knife-turned-spoon over the course of many hours. Photo: Nick Matwyuk

Then Nick brought out the worst. Idea. Ever. 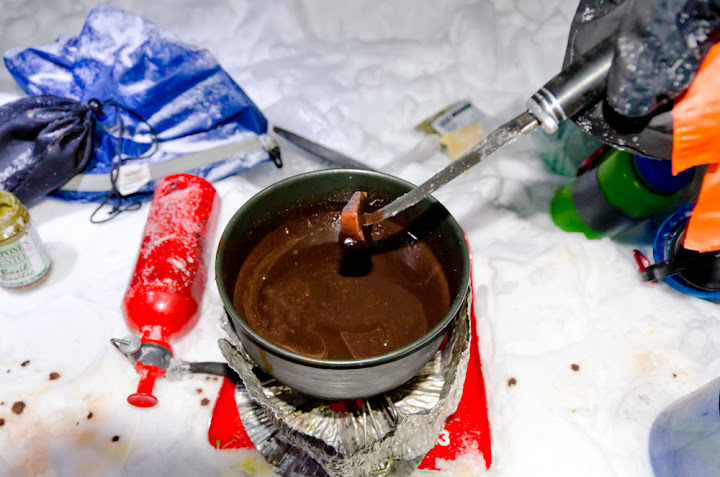 And the moon peeked out to join us, fat like he was busily feasting on his own chocolate stash. I worried that he might explode and douse our powdery mountains with a chocolate crust. What a terrible thought.

We crept into our sleeping bags in a snow hole beneath Nick’s Tarp tent. Waking up occasionally as the wind buffeted the tent to send our own breath tumbling back down on us in ice crystal form, I noticed I was actually warm; another rare and terrible discovery.

A solid effort was made to conquer that snow beast on Sunday. But once again, he was too big and fluffy. 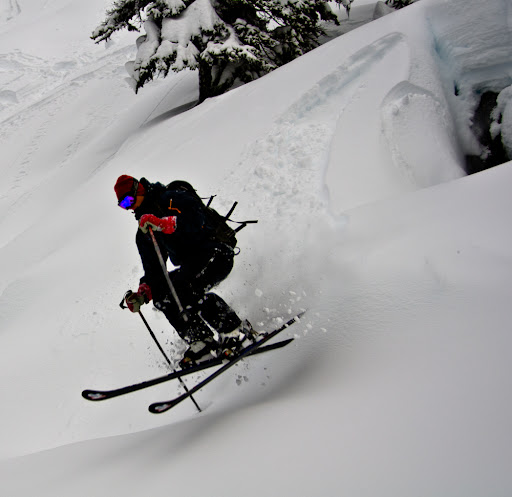 We trod back to camp and ascended Rohr ridge from the North, with the intent of skiing its SW runs back down to the highway. Continuing up into a white-out, Natalie continued to greedily hog all of the trailbreaking, until we eventually turned around for lack of visibility.

Down through the trees we skied, dodging our coniferous friends and their attempts to steal our toques with their branching arms. Popping out at the road just as the light began to fade, we noticed that the freezing level was just below us. What a terrible, dismal, gloomy way to spend a weekend!