I think this picture set the mood for the entire trip 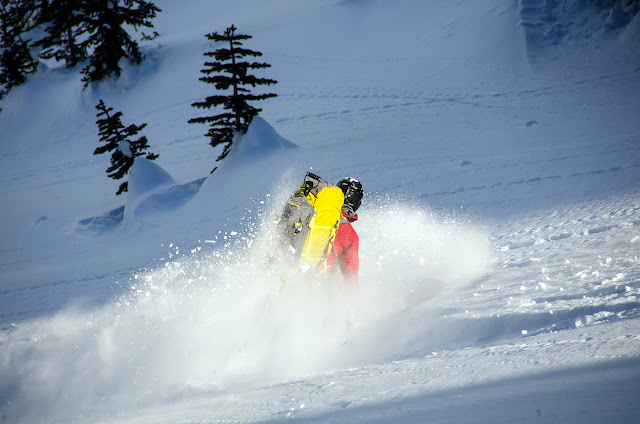 Things started out with dozens and dozens (and probably a few more dozens) of e-mails. Ideas laid out in text like maps over tables. Atwell, Spearhead, Garibaldi, the list goes on. Why all the excitement? Sun!

It had been a solid 3-4 weeks of stormy weather, high to extreme avalanche danger and I think all of us were starting to feel a little conscious of the claustrophobia trees and thick clouds impose on the conscience.

A little nervousness ran down my spine. A special avalanche bulletin had been released offering a warning of high consequence avalanches. Would this be that kind of trip where the conditions are dangerous but tempting? Where the beautiful weather tempted even the most conservative out onto the slopes of demise? Thankfully no. This was undeniably some of the best conditions all year!

I’m getting ahead of myself. After a night out celebrating in Vancouver, Nick picked me up bright and early at 5 20 sharp. ‘It’s so weird no seeing you in your ski boots’ commented Nick

We made our way across the city to pick up Ben and Frances who, to my dismay had pillows ready to crawl into the back and sleep. I gave way and remained awake as Nick and I chatted the ride away with words of mountains and the upcoming summer.

After picking up my gear at home in Pemberton, we met everyone at the Mt Currie Coffee Co.

Like the good looking bunch we were, we crowded a few tables amongst some pro skiers and snowmobilers heading out to shred some gnar themselves. We then headed off to some of the furthest skiing on the Duffey. Channel Creek. Parking at the start of the Blowdown pass logging road we got ourselves ready in the cold shade.

Being the second attempt at this area, Nick had the route all planned out and we quickly made our way up the logging road into the warmth of the sun. Pictures were already ensuing as Blowdown Peak came into view and we joked about crazy lines we were heading up to ski on it’s NW face. 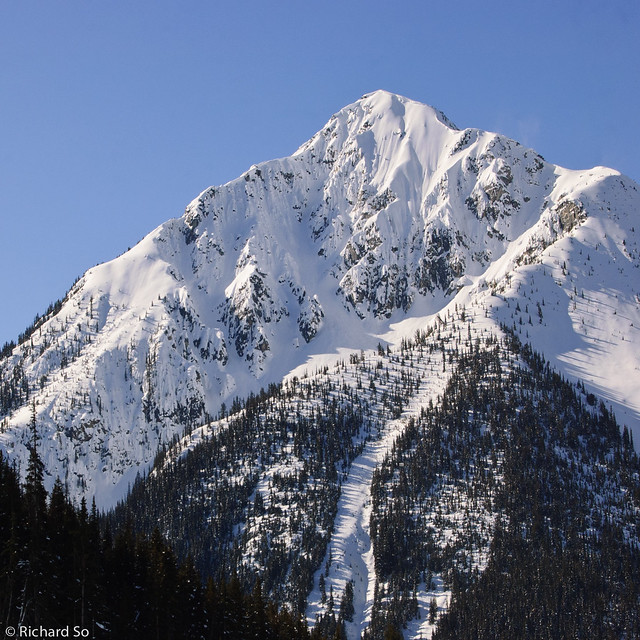 At the end of the logging road we followed a skin track from 2 ski tourers who had driven ahead on a snowmobile together. We move quickly but casually, dodging sharp stiff branches that aimed to grab at every piece of our clothes. When we came upon an avalanche gully we diverted from the tracks leading straight up the gully. Later, we would learn upon looking up that the pair had skinned straight up the entire avalanche gully and made tiny, tight switchbacks up the entire start zone only to ski a relatively safer line to the side.

As we worked our way up through a burnt forest and then ridge we noticed the snows beautiful qualities. The powder was well preserved. Skiing down off the ridge was glorious. 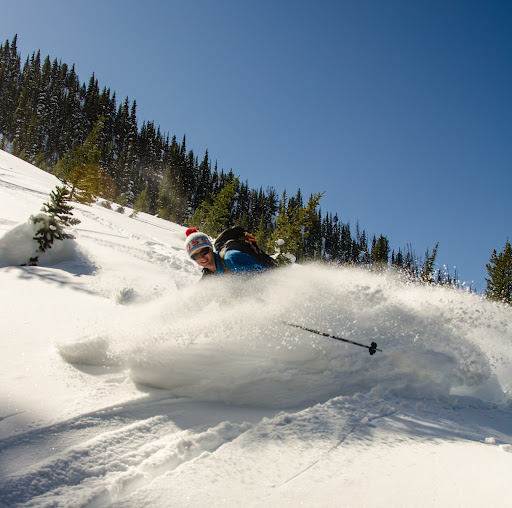 We continued up to the west lake below the Snowzone and set up camp. It wasn’t long before we were skinning up to this famous Snowzone to find out why it was named as such. 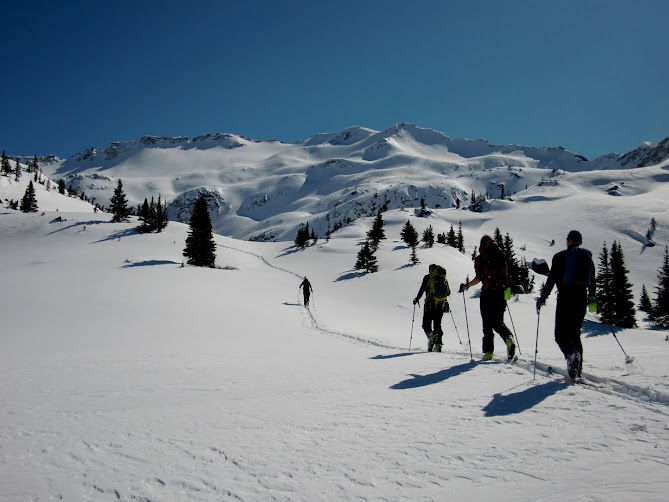 We split off into two groups. The first up the north face/ridge of Eyeore and the other on it’s extended west ridge to ski it’s east facing slopes. We both enjoyed blower powder. 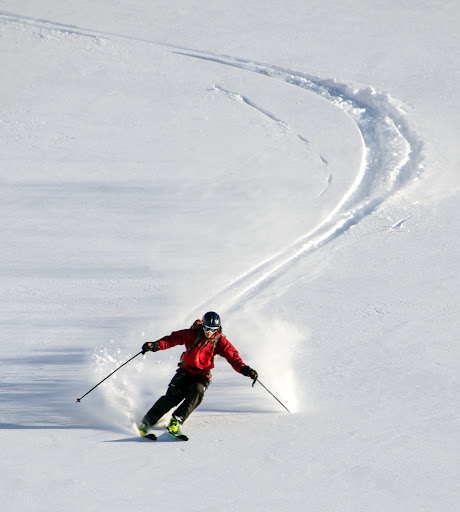 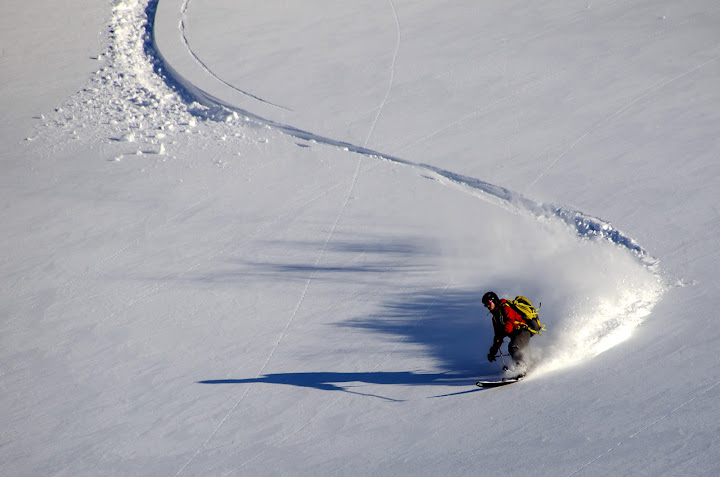 The whole time we couldn’t help but gawk at the views. Such unbelievable landscapes and panoramas. It inspired us to go higher and see what lay beyond the other side. 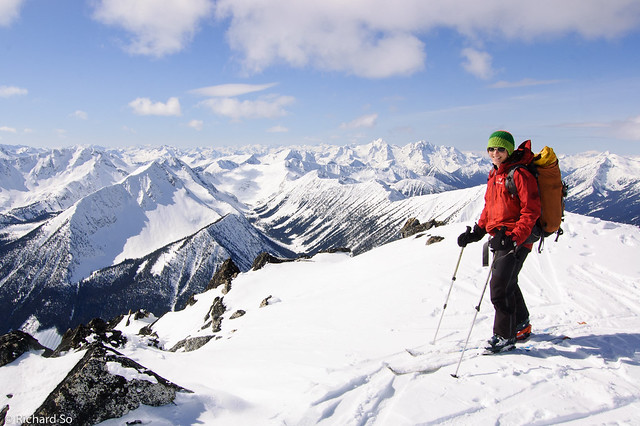 We continued to ski the north face of the snow zone and then worked our way to climb Tigger SW1. It was a beautiful scramble and summit with fantastic views of the Stein, North Cayoosh, Blowdown, Misty Icefields and beyond. 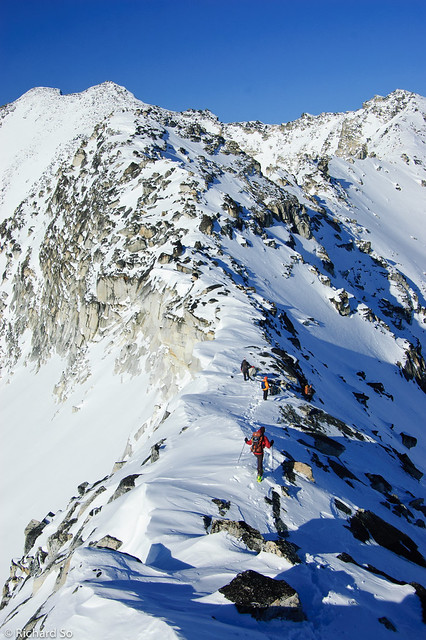 Scrambling along the ridge. Photo Rich So 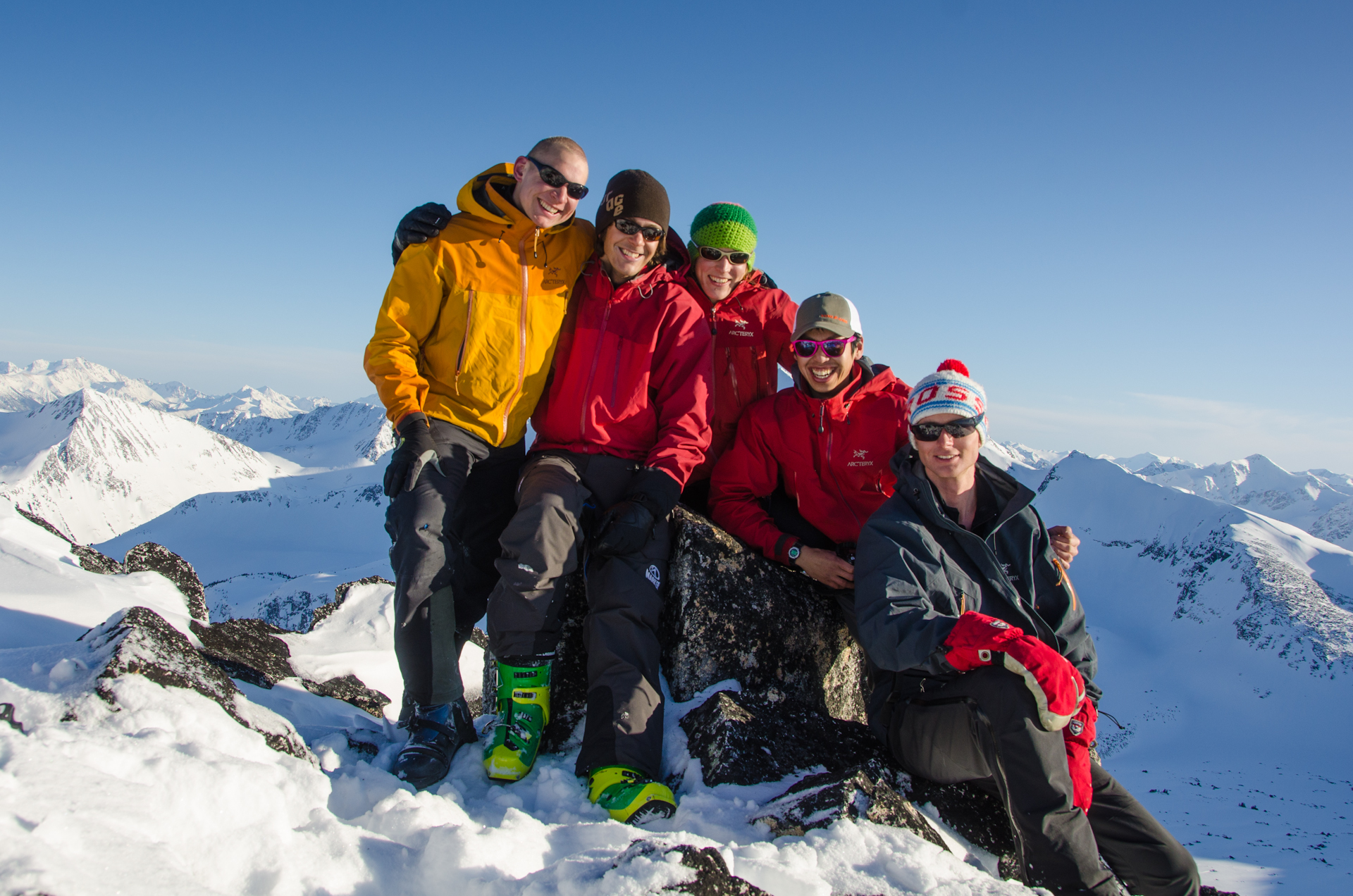 Left to Right: Nick, Christian, Natalie, Rich and Myself on the summit of Tigger SW1. Photo Nick Matwyuk

After our summit we proceeded to ski down from the Snowzone back to camp. Being the first days of spring, it shows in the long lasting daylight. We were feeling especially lucky to get great views with the coloured light hitting the mountains around. 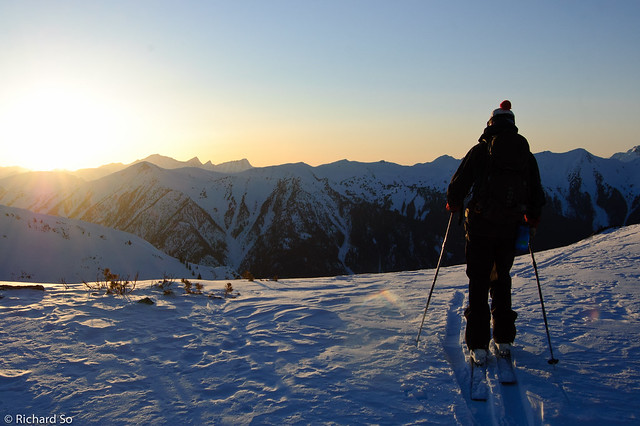 I'm enjoying the last of saturday's sun. Photo Rich So 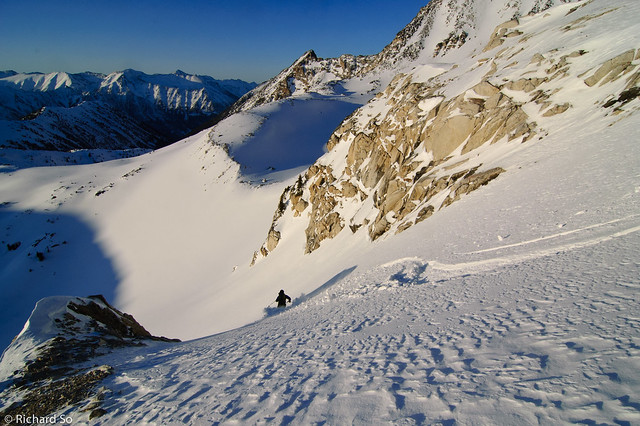 On the last run of the day, Natalie snapped her tele binding and bravely bootpacked and survival skied her way down. The next day the voile strap binding was rigged and worked great for skinning and para-marking. She skied laps with us all day!

Back at camp we went where we met up with the other party already getting dinner and tea ready.

We cooked well into the night sharing food. Nick with meat chilli, Frances with veggie chilli, Natalie with baggets and brie, Christian with a makeshift apple-almost-pie desert and much more. Rich and Fiona had brought up a nice little tea pot and comfortably showed off their British heritage. The temperature dropped but never below anything uncomfortable. 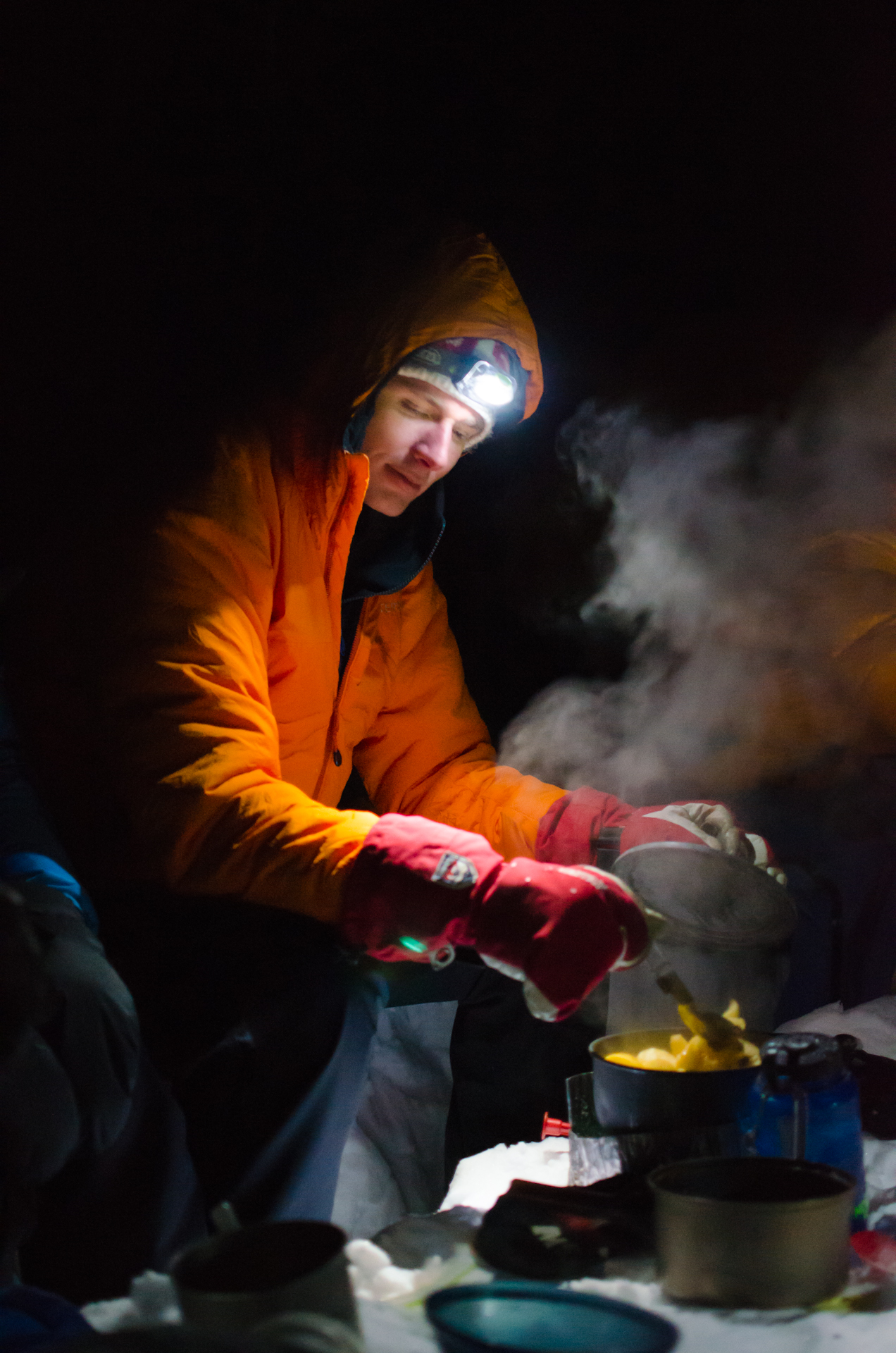 When it was time for bed I crawled in to Nick’s circus tent. We were squeezing 5 under it’s floor-less shelter. In the tight space I accidentally stepped on my thermarest popping it instantly. Those in the tent were kind enough to lend me their shells to sleep on and Marius moved to have me in between two others. In the end it was a warm night. Thank you.

The next day proceeded similarly to the first. We started by skiing the first run to get sun in the snowzone, the Sun Run, which the other group had skied the day before. 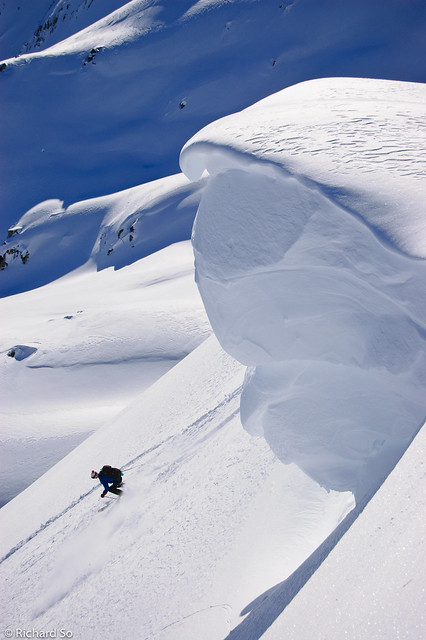 We proceeded to summit Eyeore (which Frances and Ben scrambled up later) but first had a nice long snack break as Rich S. brewed water for all of us with insufficient amounts. 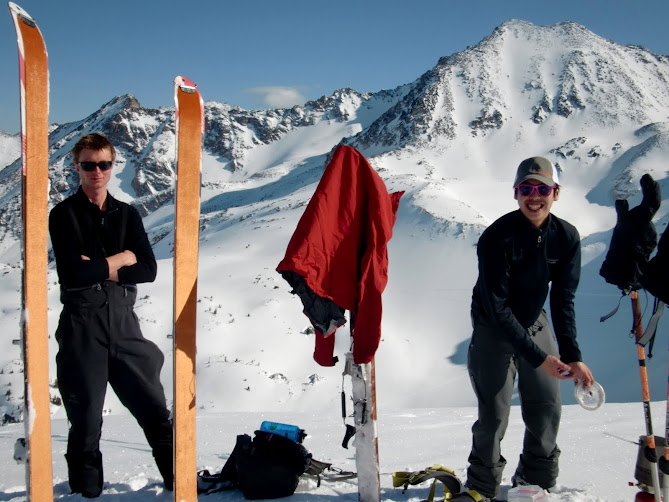 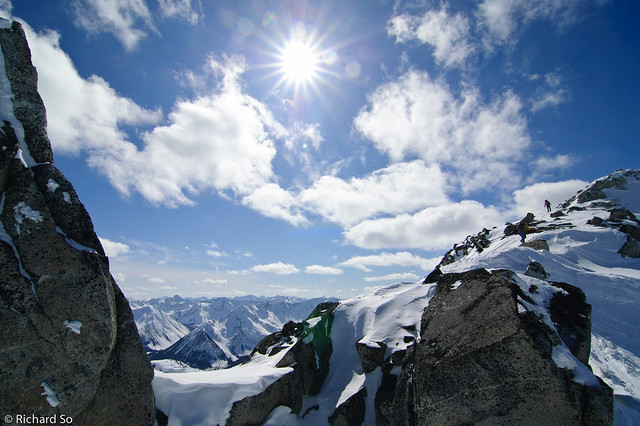 Ben and Frances near the summit of Eyeore. Photo Rich So

After that we continued to ski laps all over the north aspects of Snowzone. The stability proved bomber and the snow, blower. 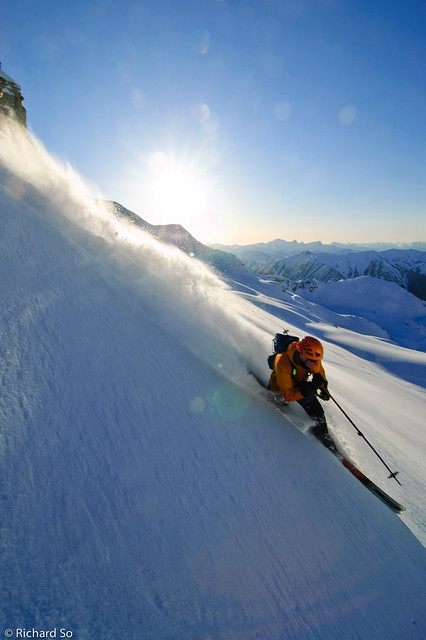 Nick showing us up. Photo Rich So 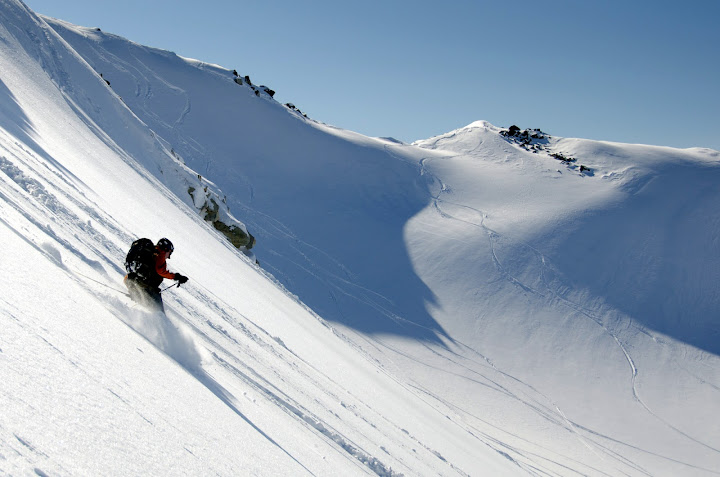 Ben doing his best to track out the slope. Photo Nick Matwyuk 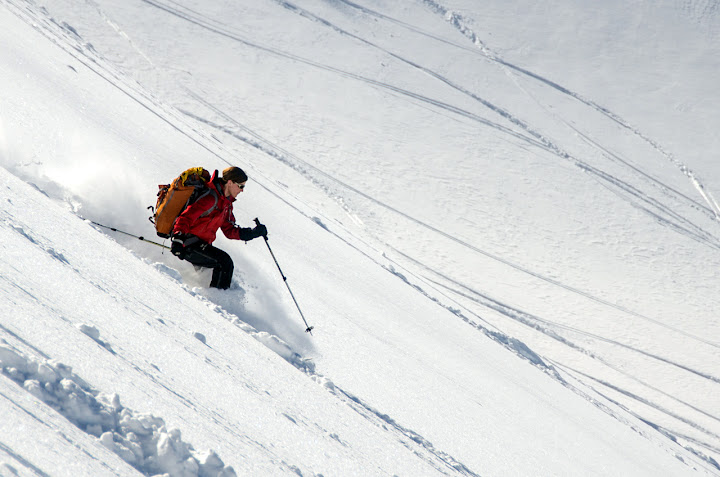 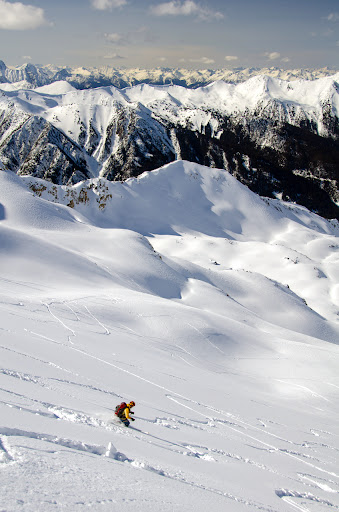 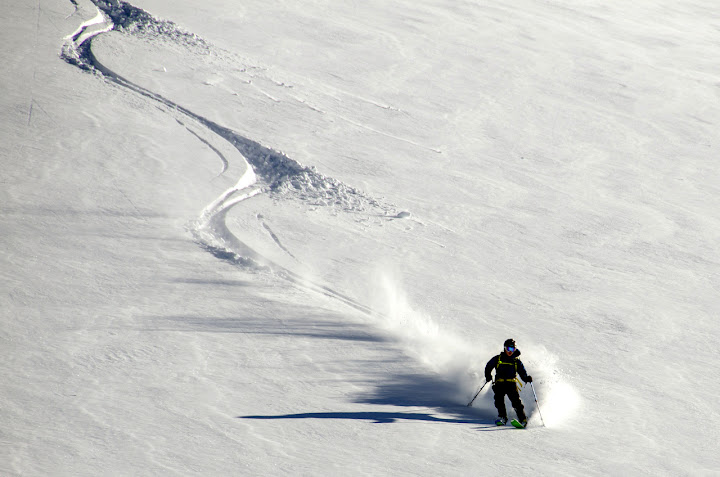 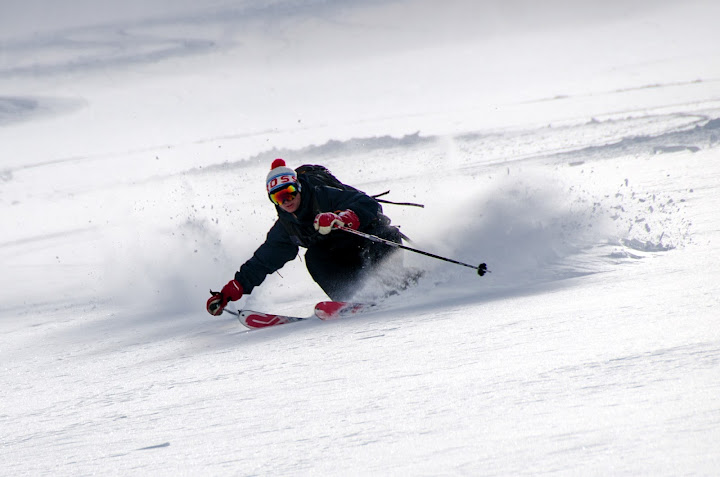 We even skied a few interesting lines. 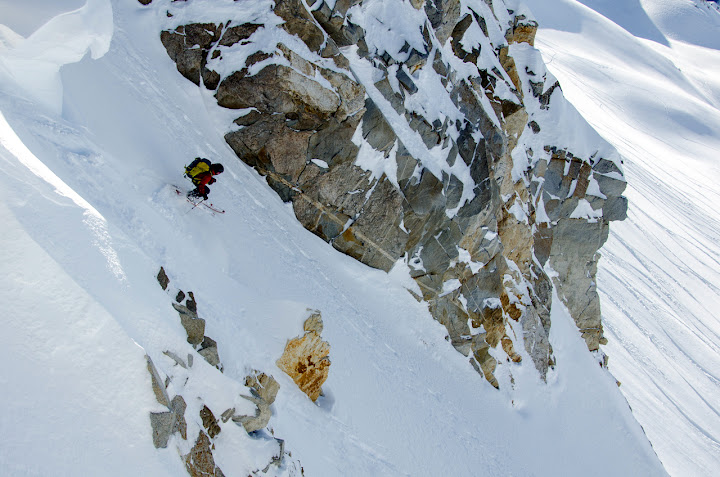 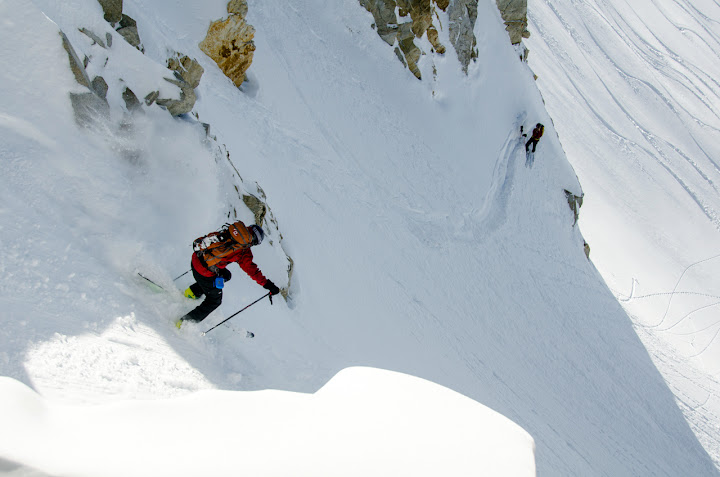 Christian putting in a line over some rocky stuff. Photo Nick Matwyuk

In the end I think our group of 10 did a great job of tracking things out. (Note, many more slopes skied) 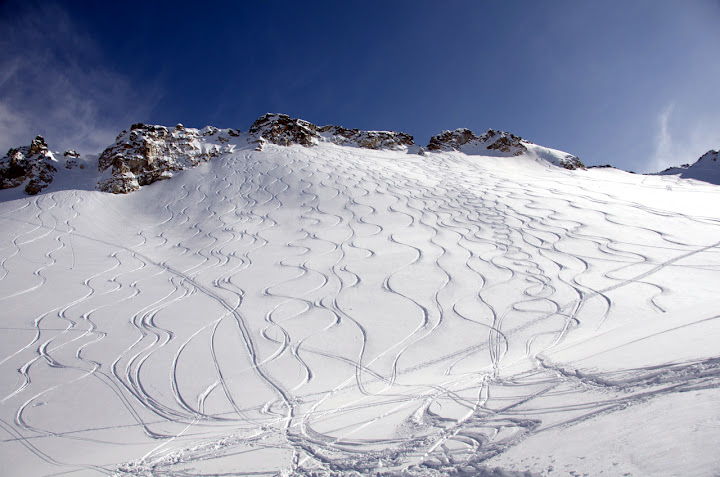 The end result to all our skiing. Photo Nick Matwyuk

Marius, Fiona and Rich L. had to leave early and we soon took leave as well. We made our way down the creek following a different route and we were out in 1 and a half hours. Quite the contrast to a few weekends ago when it took an extra night, search and rescue, etc. (But that’s another story).

We drove back to Pemberton for an awesome meal at the Mile One cafe/restaurant where our table faced a map covering the entire wall of all the mountains left for us to explore. The world is big but it means there will always be more to explore.

Thanks everyone for such great company in the mountains.