The drive to Yosemite took a full 24 hours with Jacob Cramm driving most of the way, a stop for groceries, and a stop to replace a radiator hose and coolant.  It was my third day in a row of surviving on short naps and I decided it was quite dangerous for myself to drive.  Thanks Jacob…  Fortunately for us, we had just arrived at the start of an epic high pressure system and we were greeted with nothing bun sunshine for the next 8 days.

Day 1:  We climbed the Caverns:  A 5 pitch 5.8 close to camp 4.  There was some wet climbing done that day, but it was mostly reasonable.  The highlight of my day came when climbing an unprotected 5.7 chimney after it spooked the party ahead of us and Jacob out of leading it.  It really wasn’t too scary.

Next up, we tried to climb Nutcracker, another 5 pitch 5.8.  Unfortunately, the route is very popular and we were stuck behind a line-up that included some very slow climbers.  Climbing on the first pitch, I ended up far above my last piece of good gear with a bad fall onto a ledge with some very slick polished rock in all directions.  I fortunately did not break any ankles and pulled through. We bailed after the second pitch and later discovered that I had scared myself on an alternate 5.9 start and not a 5.8 as I had thought.

Day2:  We climbed the Central Pillar of Frenzy on the Middle Cathedral Spire: a 5 pitch 5.9.  This was an epic climb of beautiful splitters from thin fingers to fists and even a nice roof.  Jacob led the first pitch, which was a sopping wet 5.9 corner with polished feet; A truly brave feat that allowed us to access the next four pitches of awesome climbing. 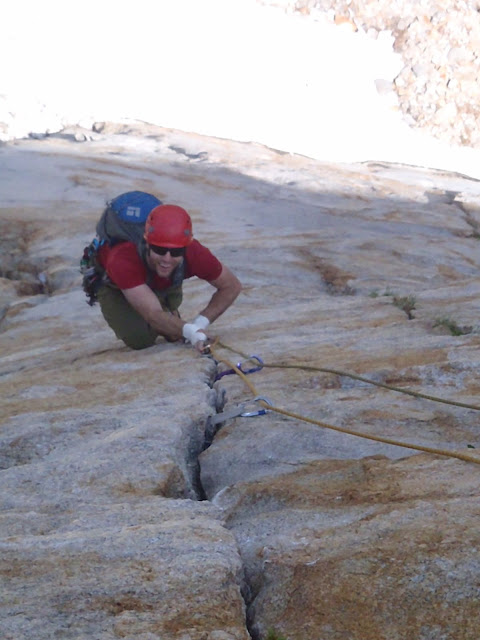 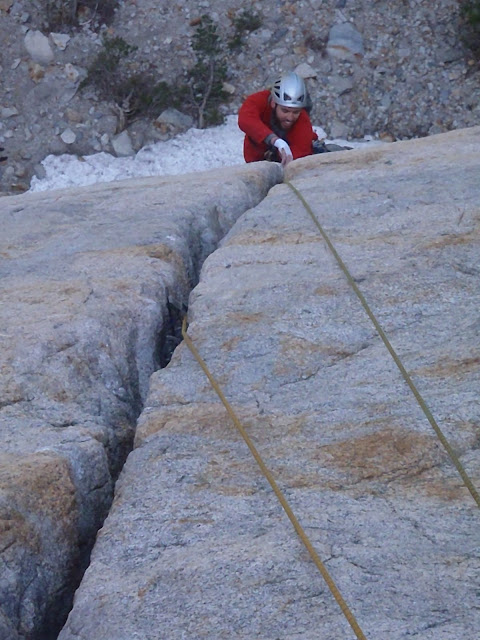 Day 3:  We wanted a big day, so we climbed the East Buttress of Middle Cathedral Spire: An 11 pitch 5.10a.  We got an early start on this one and we were able to move quite quickly due to lots of relatively easy climbing.  Jacob lead the crux pitch beautifully, but only after I offered to carry his backpack (there was an option to climb a bolt ladder instead); carrying both backpacks gave new meaning to off balance manteling…. 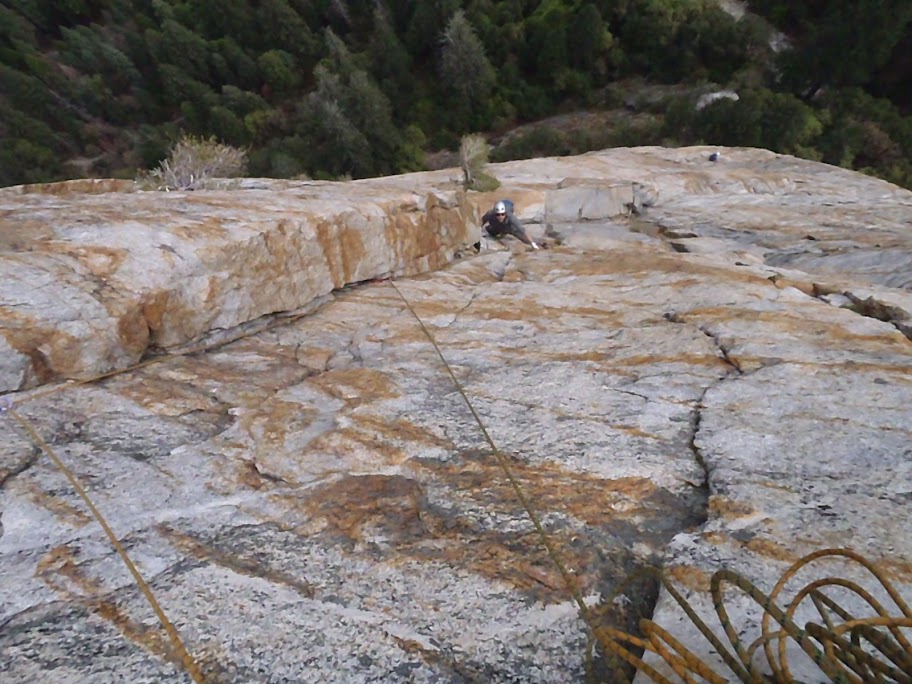 I found this particular belay ledge quite beautiful: 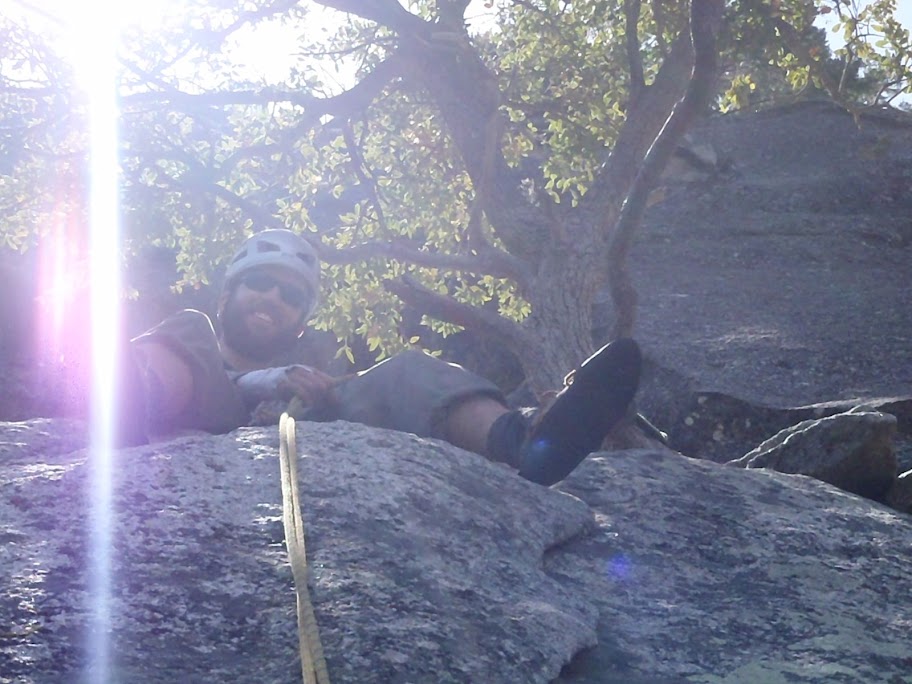 Day 4:  After the long day before, we decided to have a rest day.  We climbed Higher Cathedral Spire: A 5 pitch 5.9 with a 1.5 hour approach.  What kind of rest day is that?  I don’t know, but we at least we spent an hour relaxing on the summit of one of the coolest spires I’ve ever seen or climbed. 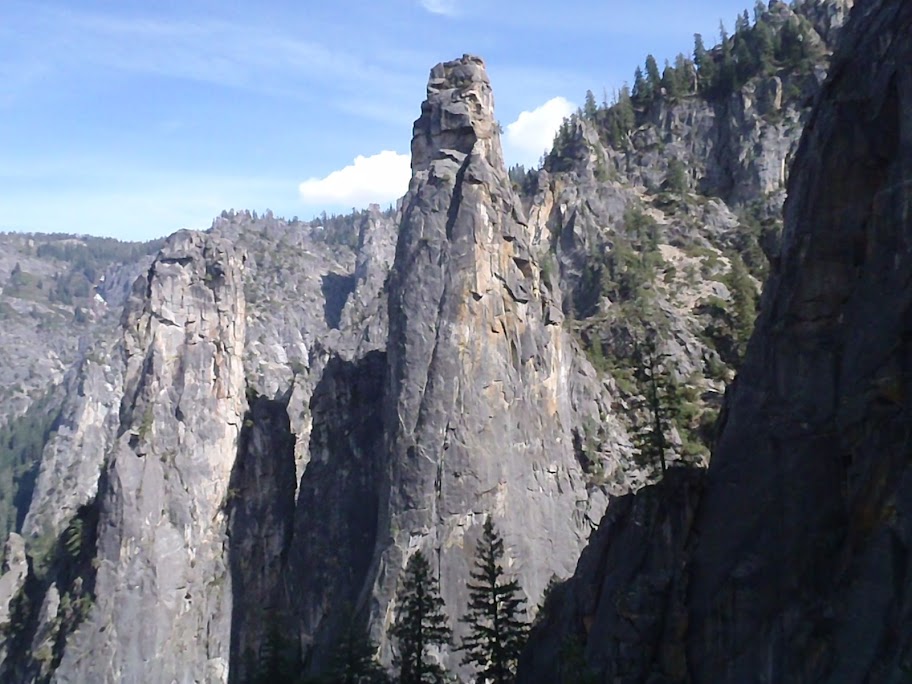 We made the poses necessary when you climb such things: 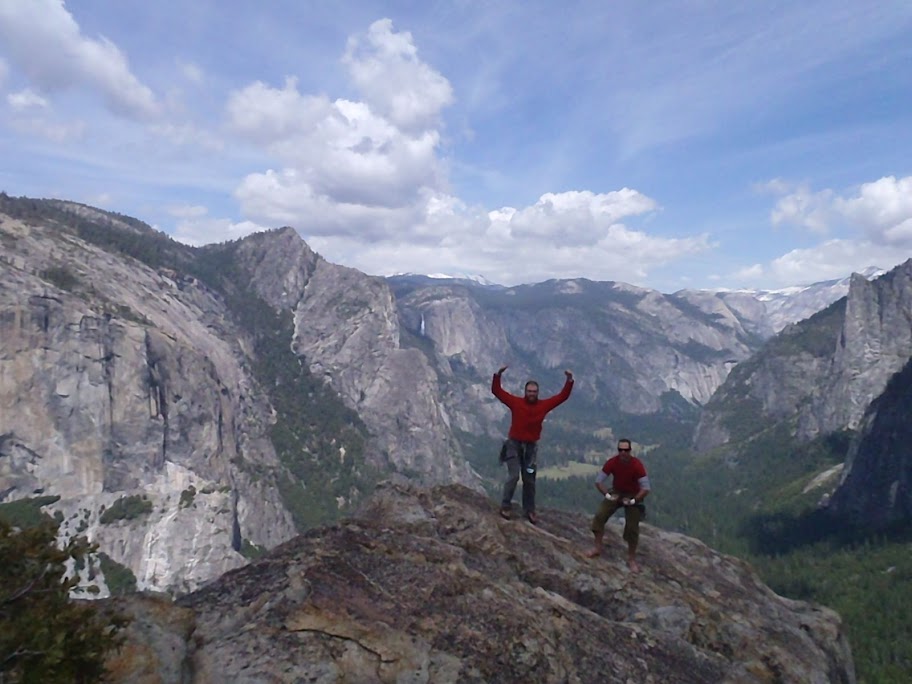 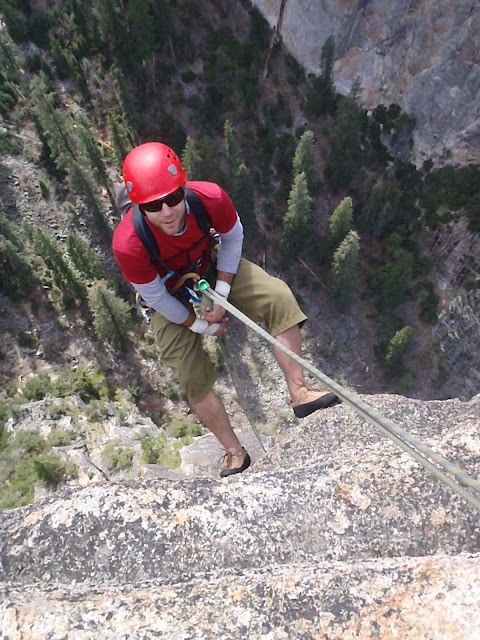 Day 5:  We decided to have another big day and climb the East Buttress of El Cap: a 13 pitch 5.10b.  The climbing was great and we even climbed the crux pitch, but after reaching the top of pitch 5, the wind picked up and blew the nearby waterfall mist across our route and soaked our rock.  We then bailed and headed down the way we came up.  On the hike back to the truck, we took a swing on a long fixed line they have setup in the ‘El Cap alcove.’ 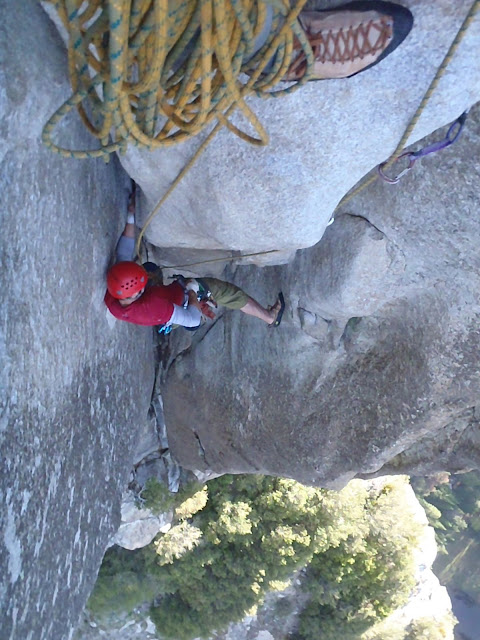 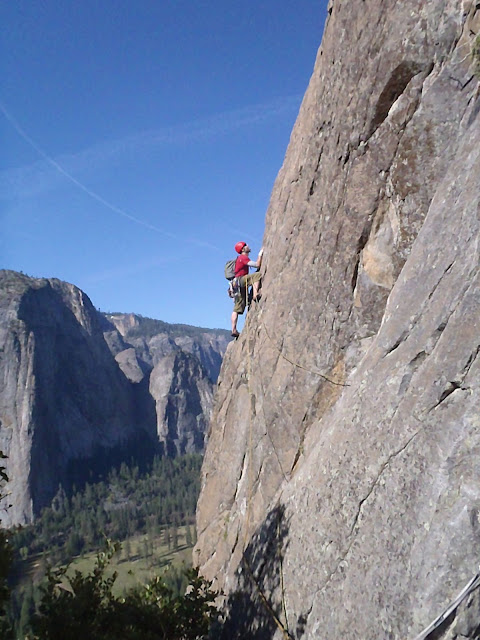 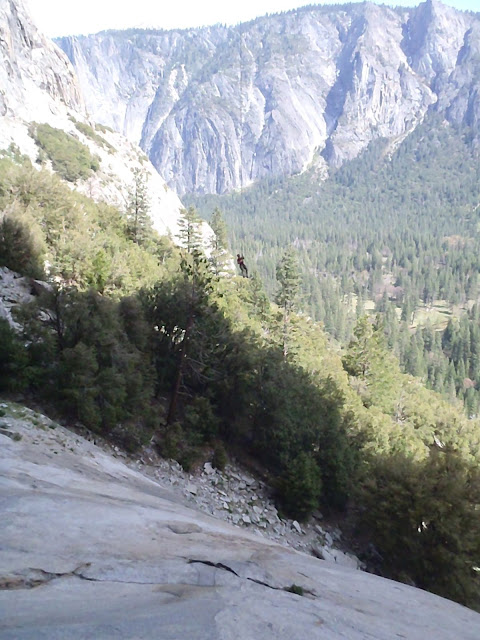 Day 6:  This was another rest day and we went cragging.  We only climbed 3 routes with a pin scarred 5.10a being the highlight of the day.  This is probably the day we also poached showers from a nearby camp.

Day 7:  Another big day.  We climbed the NE Buttress of Higher Cathedral Rock: a 12 pitch 5.9.  We both agreed that this was one of the best long routes we had ever climbed and was also a bit of a sandbag at 5.9.  Of the 12 pitches, 9 were sustained and included everything from thin hands, to fits, to offwidths, to squeeze chimneys, to stemming chimneys and all of it very steep.  One prominent memory was the 11th pitch;  It started with climbing 5.9 offwidth, in which I placed my #4 and #5 camalot, then pulled a 5.9 roof, only to discover that I was now at the bottom of a 10 meter long 5 inch corner crack. Cursing myself for having already used my large gear, I called down to Jacob, “Hey Jacob, I’m very runout and climbing another offwidth without any gear.  Watch me!”

The traverse of pitch 5: 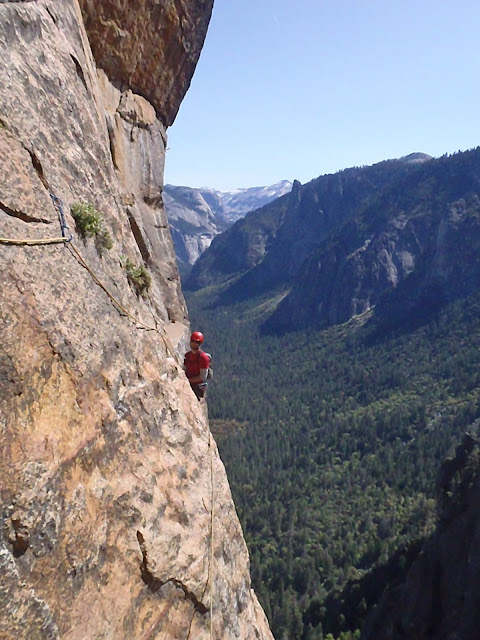 Climbing a flaring chimney on pitch 7: 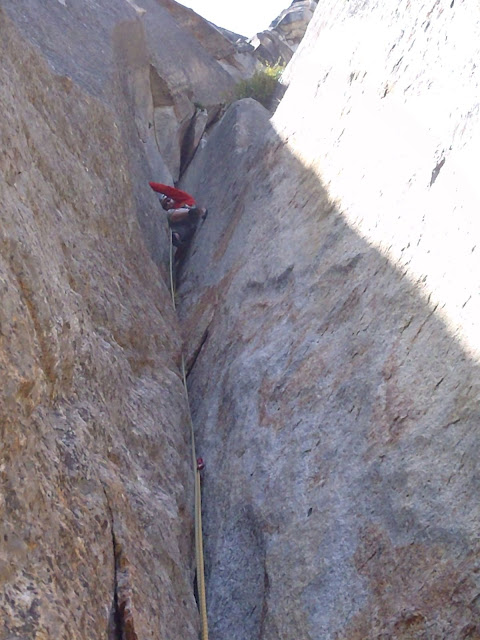 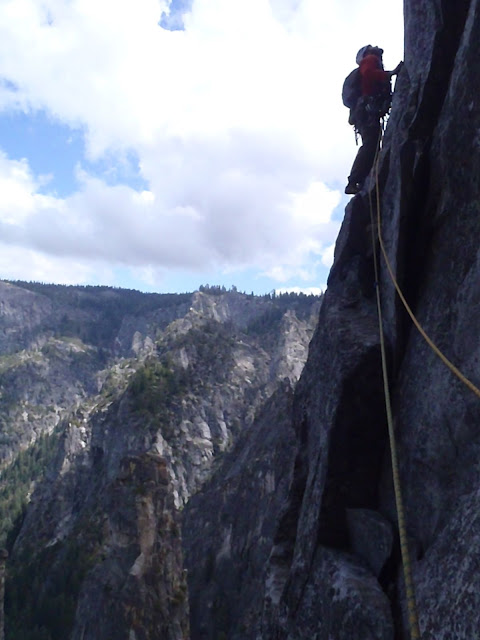 Jacob on top of Higher Cathedral Rock with El Cap in the background: 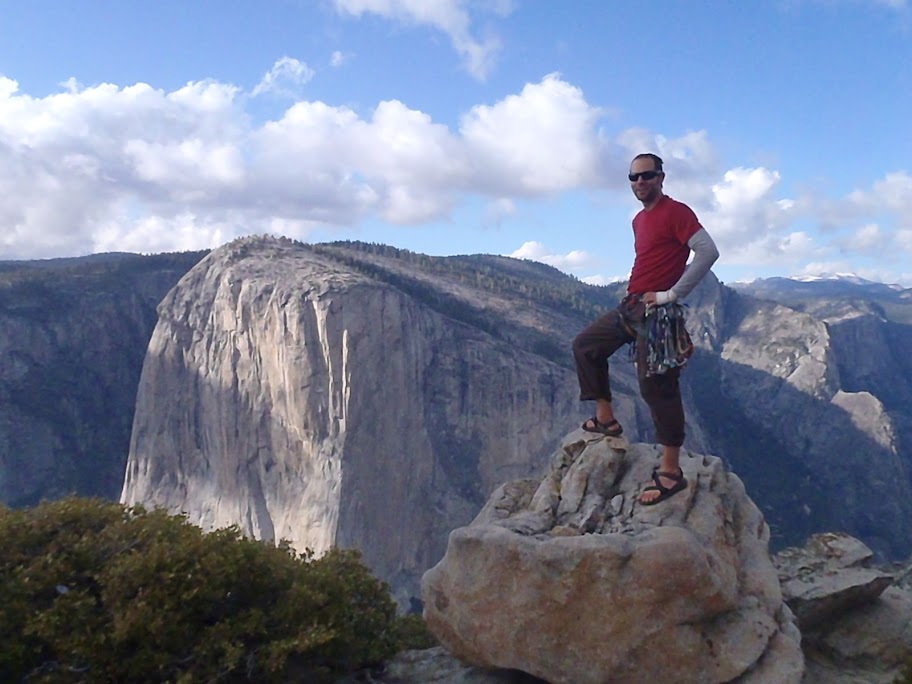 Day 8:  Our bodies were very much destroyed after a full week of climbing.  Jacob spent the day lounging around in his hammock with a good book while I wandered around the forest looking for bouldering buddies.  It didn’t take too long before the skin on my fingertips was finally toast and I too pulled out a book and began to relax. 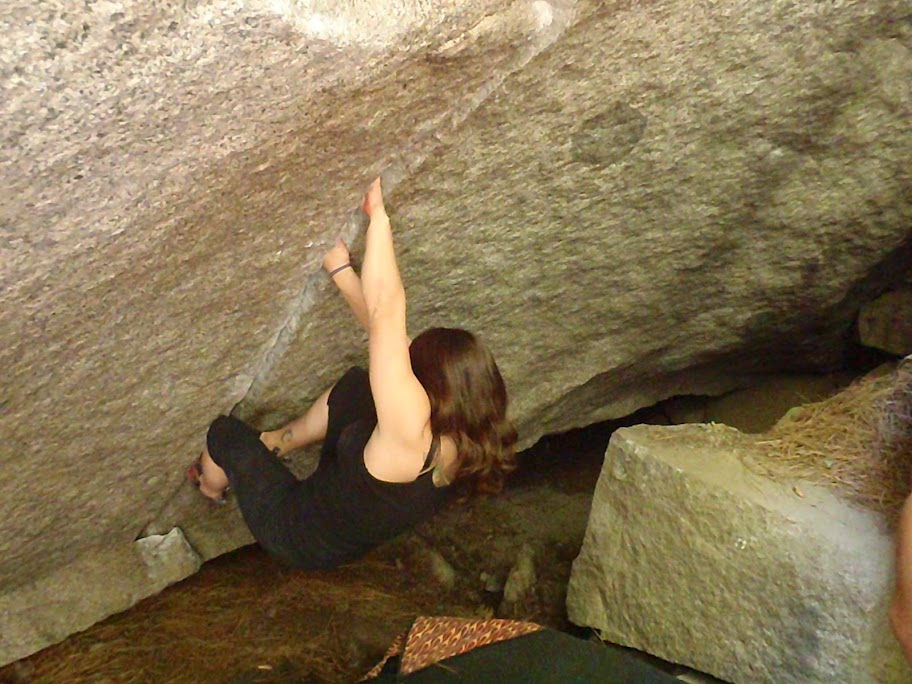 We packed up our stuff the next morning and were back in Vancouver 19 hours later.  Besides the climbing, we met many interesting and friendly people who came and went at Camp 4 and others who we met climbing.  One awesome pair of climbers included a Mother and her Son who we met climbing the East Buttress of Middle Cathedral Spire and who later treated us to some pizza in the Valley.  Yosemite is absolutely breathtaking and full of excellent hiking and climbing.  After staring at El Cap all week, I now want to return and climb the Nose…

Thanks Jacob for the awesome week of climbing and sorry for repeatedly forgetting to lock the door on your truck!

One Response to 8 days of Yosemite climbing