Some time ago Sam McKoy emailed me basically saying “let’s do something hard involving skis”. A little hunting around at photos suggested that we might be able to keep the grade on Joffre NW ridge down by bypassing difficulties out on the N face (Alpine Select says Joffre NW ridge involves some 5.8 moves), and so we figured that doing the Joffre Enchainment over a weekend (with skis) could probably classify as hard and maybe even fun. But as the weekend drew near the weather report started looking grim for Sunday, so dividing it out and doing daytrips (rather than carrying camp up there) began to look more promising. No need to carry heavy overnight gear just to camp in a whiteout – might as well enjoy a nice ski back to the car in the sun and a possible skin up the next morning.

Friday everything came together – I finally submitted a paper I’d been working on for a long time, and even had an epiphany regarding another problem I’d been working on for the past 3 months (maybe I’ll finally graduate!) before clearing out of the lab at around 6:30. Back at home I mounted bindings to my skis (epoxy on the inserts had been setting after I broke the previous bindings and found that the screws had also loosened – this makes the 3rd set of bindings mounted to these skis), and also repaired my backpack, climbing skins, and home-made camera case before packing my gear and scraping into to MEC 2 minutes before 9:00 close to buy Sam a new pack (didn’t even have to pay for parking, as somebody pulled out just as I was pulling in). Soon (although I had to make a quick U turn as I almost forgot my crampons) I was heading up the Sea-to-Sky, picking up Sam in Squamish at eating the oatmeal he’d made me for dinner as we cruised the empty night streets to his parents abode in Pemberton.

Saturday we left the overnight gear at home, got an early start, and were bootpacking (snow gone on S aspects) up the bottom of the NW ridge through open un-coastal style bush by 6am: 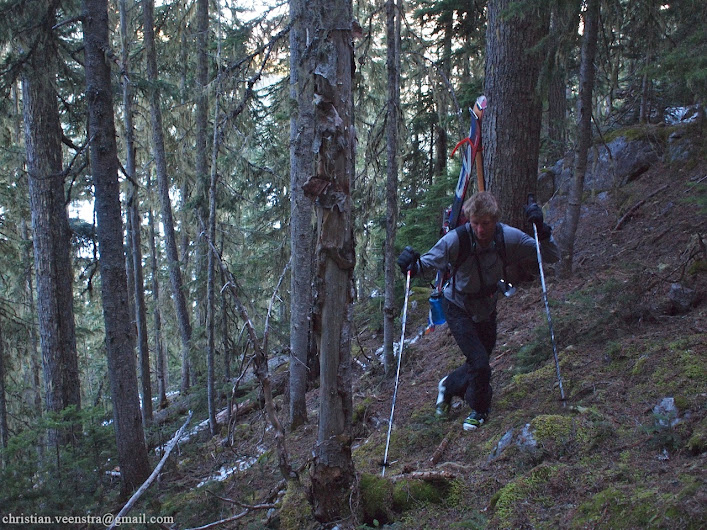 Soon enough we had the skis on and found ourselves in the alpine, cruising with ski crampons on Joffre Shoulder with fast, crusty snow and enjoying the amazing scenery: 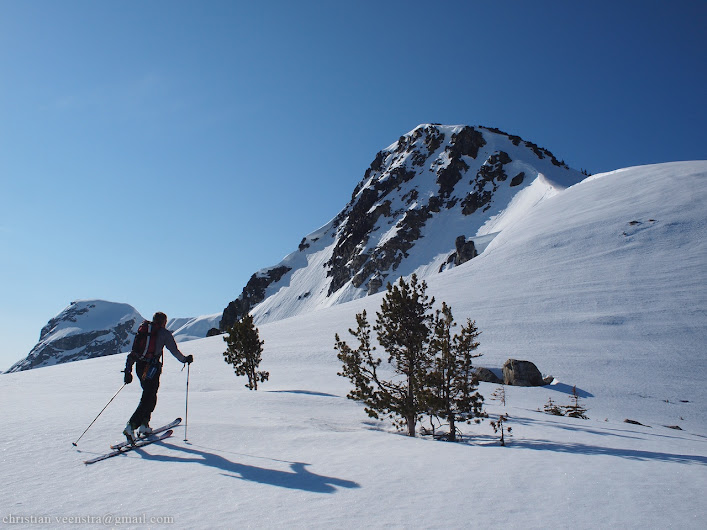 Eventually we started to get a look at the “real” objective, and (for a while) it looked like it might be true that we could avoid the difficulties by traveling on snow:

We were even able to avoid the rappels by either going around on the face or just downclimbing: 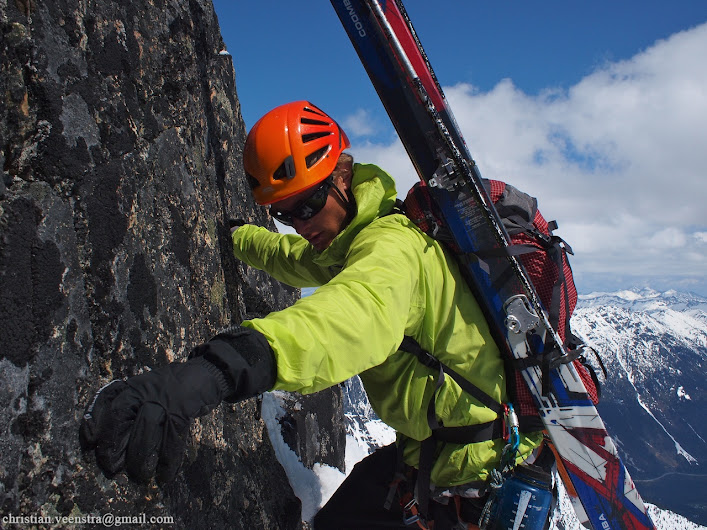 And enjoyed some great snow climbing: 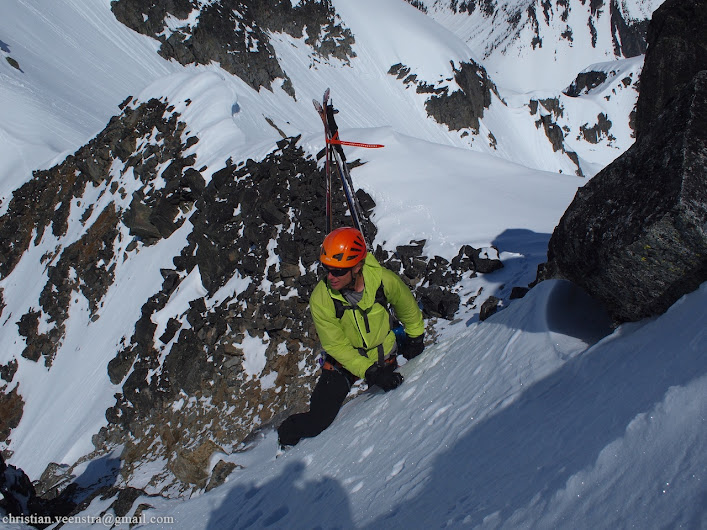 But, eventually, it became evident that we were either going to have to rap out over the cornice and commit to uncertainty on the N face, or bust out the small rack and 30m rope we’d brought and climb some rock (or, I suppose, bail). We chose the rock. 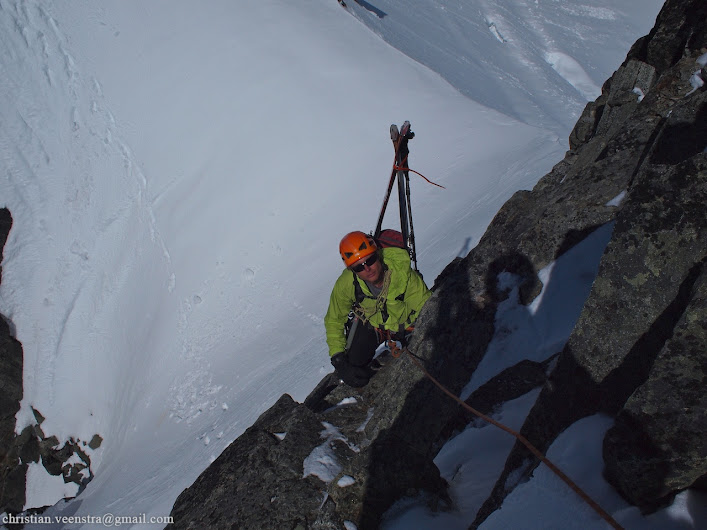 After a bit of a faff whereby I led off almost a full rope length in a direction which didn’t pan out (at least not in ski boots) two pitches (one short, one a full 30m rope stretcher) of blocky, secure (at least when the skis weren’t hitting the wall, impeding progress), climbing and some snow brought us to a small pocket belay above which (I thought) a mantle would lead to simple snow travel the rest of the way to the summit:

I kept Sam on belay as he went to check out if he’d feel comfortable continuing un-roped on the snow after the top of the second pitch… which turned into his first (somewhat unintentional) trad lead, as it was fairly shallow with downward sloping slab underneath but he went for it anyway. Sorry about that, Sam – I found the climbing after that point awkward too. After that we were able to avoid what could have been a final rock pitch by heading out onto an exposed-feeling snow fin which took us onto the N face, which we climbed to the summit: 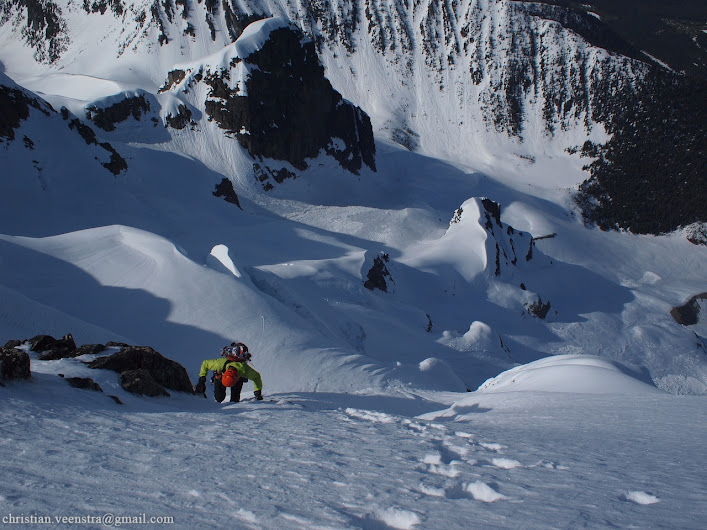 Soon enough we’d taken our summit photos, strapped on the skis, and were heading off toward the top of the Aussie Couloir: 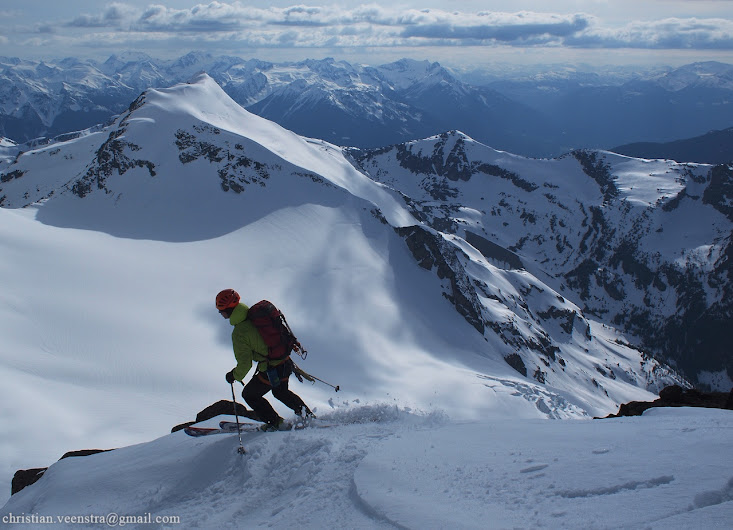 Which was in perfect condition: mushy, but not too mushy:

From there we skied out down past the Matier Icefall, which makes a great backdrop for skiing photos: 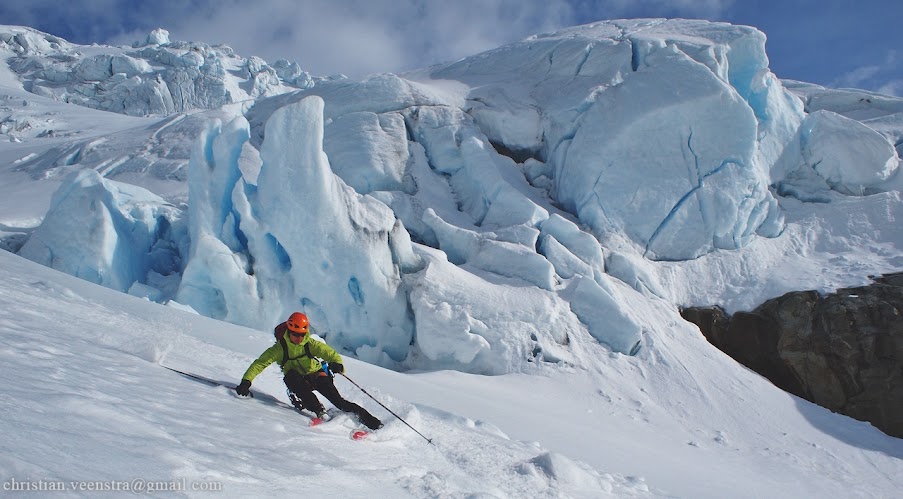 Skiing down through the forest got a bit thin, but we were able to keep skis on all the way to the carpark. This included skiing across a few wooden bridges and ramps with some snow spread out on top by hand (which was declared possibly the worst idea of the trip beforehand, but actually worked surprisingly well). We even got back to the car at a reasonable time, and got to eat a fine home-cooked meal with Sam’s family. The next day dawned grim and whiteout, with a bit of drizzle, so I think the daytrip idea was the right choice.

More photos here from me and from Sam.

Epilogue: The next day Sam and I did a loop around Marriott to Cayoosh in the drizzle and whiteout. It was a good day out, but unfortunately some thief made off with our (stashed) skis during the 30 minute walk between where we came out and where the car was parked. Must have seen us walking ski-less, figured it out, and went looking. Sam’s skis were only two seasons old and still in the honeymoon-stage; while mine had seen probably 400-500 days of adventure, were on their 3rd pair of bindings and (as my only skis) had taken me through everything from powder to corn to rocks to being strapped to a kayak on month-long expeditions (twice). While I’ll have real trouble replacing them (especially at this point in the season), and while I always assumed I would be the one to finally break them – jumping off one pillow too many or trying to side-slip a rock – I can’t really think of a better “last hurrah” than this Joffre trip. And at least they didn’t leave me stranded a week’s travel from nowhere. I’ll miss you, old skis.

On Monday we picked up my wife and her party as they exited their Blackcomb-Currie turned Blackcomb-Wedge traverse, making for a full vehicle back to Vancouver.

On Tuesday two papers on the same topic I’d been working on, written by a competing group, appeared on the preprint server – they had submitted them only 16 hours after my submission became visible. Doesn’t get much closer than that…