This year Jon introduced the “lead ladder”,
a 4-evening plus one weekend trad climbing course
for VOCers willing to pass on their skills afterwards.

The lead ladder started with the UBC-Wednesday sessions which were:

1) Equipment theory sessions: Here we learned about fall factors and
impact forces, the strength rating of gear and what these numbers actually mean. We played with Jon’s cams, various nuts and tricams and learned that ropes generally do not fail when used properly. He also provided us with ample reading material (including a complete manual of what gear needs what type of care and maintenance. Awesome!) 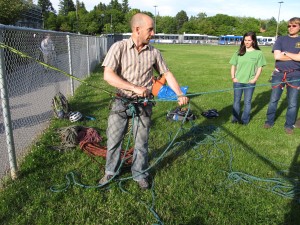 Jon demonstrating a belay from top

2) In the second evening session we met outside at the busloop in the evening sun and practiced belay systems. We made equalized anchors at the fence and learned how to belay from the top. It seems we can abandon our personal anchor systems, anchor slings and our need for at least 10 locking carabiners now.

3) Access, the Environment and Ethics: This session covered topics like route cleaning and being nice to crack-residents, other climbers, birds and nature in general. 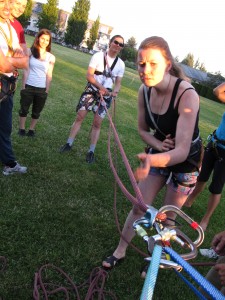 4) Hoists, Rescues & Emergencies: The last Wednesday session was again a practical one at the UBC bus loop. We learned for example how to escape the belay and how to set up assisted hoists. Another great aspect about these Wednesday sessions was, that they ended with
socializing, beer and sometimes food in the Pit.

Saturday-only session
Since the weekend of the course had to be shifted by one week and since
Phil T. and Steph could not make that new weekend, Jon in his generous awesomeness suggested to teach us himself on another Saturday.
Our destination on this Saturday with amazing weather was Murrin Park.
Here we started with placing lots of gear and got great feedback (rotating nuts by 90 deg works wonders) and Jon magically removed a tricam and later an alien cam from where I thought they would stay for eternity. Next we led some easy routes with Jon giving feedback all the time and practiced the assisted hoist. (Nobody told me before, so I was a bit startled when Phil told me with a straight face that he couldn’t continue climbing on the pleasant 5.4 I was belaying him up on). 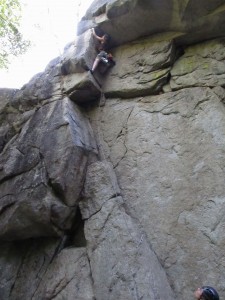 Finally, Phil and me showed our climbing prowess on badass 5.7/5.8 routes,
which Jon smiling and easily solo-climbed (in his approach shoes of course) to inspect or retrieve our gear.
The evening ended with a great BBQ at Phil T.’s place. 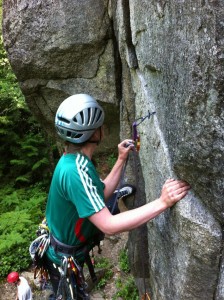 With a less than stellar weather forecast, we rode up to Murrin Park on Saturday with the 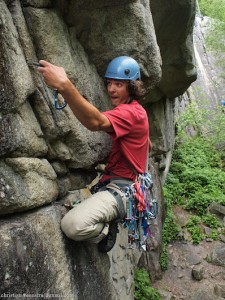 Christian clinging on as he places a cam

intent of repeating what Steph and Phil did last weekend:
Placing gear on the ground and doing some easy single pitches on Sugarloaf. A short but rich rain shower made for an interesting first climb, but at least this would be all the rain we’d see on that day. The rock was quick to dry, so we just kept on climbing the entire day. 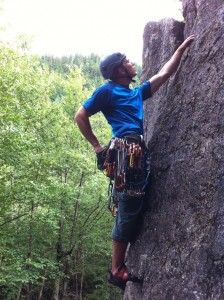 Derry sporting an impressive rack as he cruises up the rock

Rumors about the liquor store closing early had us worried at first, but ultimately proved widely exaggerated, so all was well when we head to Squamish to fill up on beer and dinner. I brought a BBQ, so we had corn, steak and grilled potatoes. Sabrina made awesome chocolate banana brownies and Julien even had popcorn to offer.
The Chief campground was hopelessly crowded, so the majority of our party went to a secret spot Phil knows about to wild-camp there. Julien and Clemens stayed behind in solidarity with Sabrina, who twisted her ankle.
For Sunday, the various parties went to different venues with the goal of multi-pitch climbs. Christian and Phil took their people to Shannon falls, Jon and Sabrina went to the Bullet Heads. Since now we were all separated, I can only give a full account of what Sabrina’s and Jon’s group did: After scrambling up through the forest, Jon’s group attempted “Cream of White Mice” and I led Slot Machine. Just as I was past the cruxy start, the gates of heaven opened and I was soaked within seconds. Luckily, Slot Machine is an enjoyable crack that can be led even in the rain, although it’s definitely more type-II than type-I fun. Since the rain sketched my out initially, I also placed a bit too much gear in the middle section, leaving me “slightly” run out at the end, which made for an exhilarating finish over slab and dead trees. Not too keen on going on, we abandoned our plan of multi-pitching and opted or a lower-off instead, for which the 60 meter rope was juuuust long enough. Jon’s team made quicker progress in that all three of them made it up two (I believe) pitches, but they too opted to not go any further. 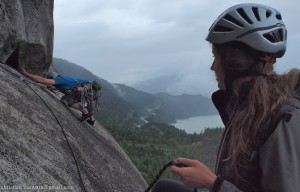 Christina belaying Derry on a slabby part of Skywalker

Down at the Chief camp ground we had lunch, but since the rain had stopped we squeezed the 6 of us into Jon’s car and headed over to Shannon Falls. There it was Julien’s turn for type-II fun, so he also led a hand-crack in the pouring rain (the brief stop in the deluge was just a clever ruse by the weather god to get us on the rock again…), while Artem and Christian and their fun with a Top-100 crack that would have been a 5.7 had it been dry, but now with water streaming down its sides it definitely appeared quite scary.
The other parties indeed made it up all the pitches of the famous Skywalker. We could see them from our crag, and Jon even managed to shout to them, informing them that we’d had enough of it and would go to the Brew Pub. After some burgers and beers, we headed home for Vancouver, all having learned incredibly much in those two days.

First of all: Many thanks to Jon for making all this happen, for doing all the organizational
faff, for spending so much time with us and for letting us benefit from your amazing
skills. Thanks to you we had a wonderfull and valuable time and hopefully all become
great trad climbers.

We also want to thank the other instructors: Phil Daust, Christian Veenstra and
Sabrina Burkhard, without whom this even also could not have taken place.

Thanks to the other participants for a great time.
Let’s keep this alive and let’s help to organize the lead ladder 2013:)

This entry was posted in Climb, Other, Trip Reports and tagged climbing, instruction, leading, teaching, trad. Bookmark the permalink.