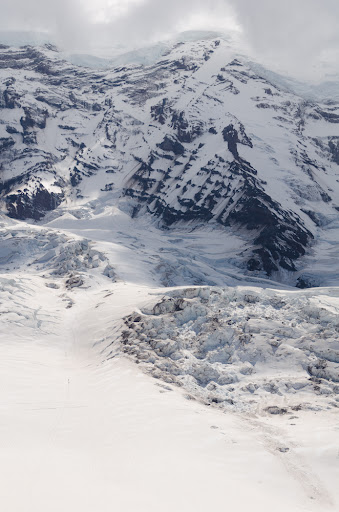 Liberty Ridge as seen from the rap station on Curtis Ridge

After being skunked for weather on the past two consecutive weekends, the forecast was finally looking up. Nick Matwyuk and I had been eyeing Liberty Ridge on Mt. Rainier ever since our abject failure on Mt. Logan in May.

With June’s bad weather we’d begun to wonder if the weather gods were punishing us for sins in a past life, but now we finally had an opening. I rushed to finish work, pack up, and pick up Nick at his place in Richmond – it was on! We cruised through the border with no issues and headed down I-5.

We admired Baker and Glacier peak, and Rainier had just come into view when Matwyuk said “You brought the pot, right?” My brain struggled to comprehend Nick’s sudden liberalization and the seemingly idiotic suggestion to cross the border with narcotics before I realized that I had, indeed, forgotten the cooking pot. We swung into the next Walmart and $15 later were the proud owners of a new steel non-stick pot with a glass lid, the latest in lightweight equipment for serious mountain expeditions. We had a hearty plate of Mexican food in Seattle and pulled into White River after dark to camp for the night. 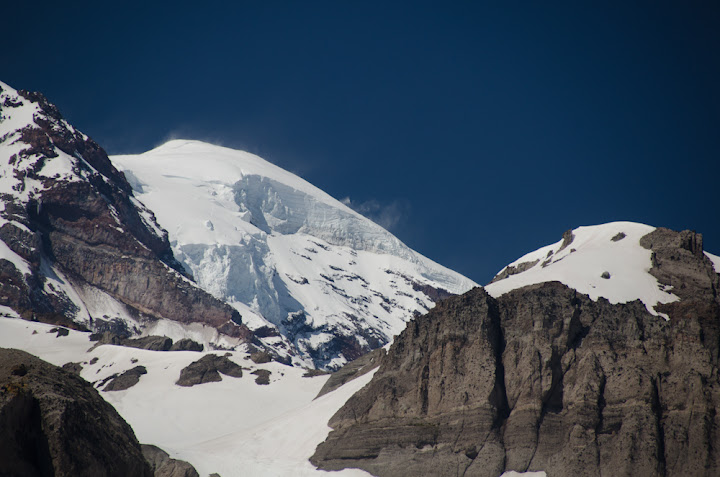 Our first view of Liberty Cap from the lower Inter Glacier - looks awesome!

We were at the Ranger station at 6:50 and were the third climbing party in line. We nervously chatted with the other climbers, several of whom were also planning to attempt Liberty Ridge. We didn’t have permits reserved, but fortunately scored the last guest permits to camp at Thumb Rock that night. We finished the paperwork, packed our bags, and headed up the Glacier basin trail at 8:30am. At the bottom of the Inter Glacier we turned off the beaten track that headed up to Shurman and made for St. Elmo’s pass instead. By the time we’d finished lunch at the top of the pass there was a serious summit cloud building – That’s not in the forecast!! We’d already done a lot of the elevation for the day so we made good time across the Winthrop Glacier and across the lower Curtis Ridge. At 3:30 were at the west edge of Curtis ridge and it was time for a discussion about where to camp – it was cooking hot and sunny down on the lower glaciers, but the summit cloud had nicely shaded the North Face all afternoon. We reasoned that is must be cooler on the North Face and therefore we could safely make it to Thumb Rock and hope to summit on Saturday, so we pushed on. We used some pre-existing rap tat for the 20m rappel off Curtis Ridge to reach the Carbon Glacier where we followed a meandering trail between huge crevasses. There was some brief excitement when the edge of a crevasse collapsed just as I pushed off to jump across, but I was able to stem my feet across the crevasse and climb back out without Nick having to arrest the fall. The circuitous route did take some time though, and it was 6:30pm before we were within striking distance of the last snow pitch up to Thumb Rock.

The top of the Carbon Glacier was a distinctly uncomfortable place to be. Nick and I looked up at the last snow pitch – it was west facing, and was now baking in direct sunlight that cut underneath Rainier’s summit cloud. There was evidence of rockfall on the slope, but we had seen the climbers in front of us ascend it only 2 hours earlier without problems. It would probably take an hour to get up, but we would be very exposed for the whole climb. On the other hand, we could make camp in our current location – it was protected by the large bergshrunds and crevasses at the top of the Carbon Glacier. But we could also look up the Liberty Wall to see six-story-high seracs teetering 5,000ft above us. Was it possible that one of them could collapse and and make it over the schrund to wipe out our camp? Estimating the scale is hard when it gets this big – the bergshrund is as wide as two city busses end-to-end, and the serac is a football field in height, how do those units convert??!! To top it off the current location provided only a sloping tent site that was narrowly bounded on all sides by crevasses.

After much discussion we opted to make camp in our current location, and as we were setting up our decision was quickly validated. Tent-sized boulders came crashing down from Thumb Rock, making large craters in the snow. Some of them smashed on other rocks and split into torso-sized pieces that scattered over the entire slope. This happened every 10 minutes or so – any attempt to ascend that slope could’ve easily been fatal. We nervously enjoyed the show while we cooked a pasta dinner in our nice new pot, and made for bed with the dimming light at 8pm. Shortly after dusk a vicious wind picked up and mercilessly battered the tent. It was strong enough that we staked down the coiled rope for fear that it might blow away. We hoped the wind would die down before our planned alpine start at 1am, but at least it somewhat hid the sound of ongoing rockfall and seracs collapsing above us. 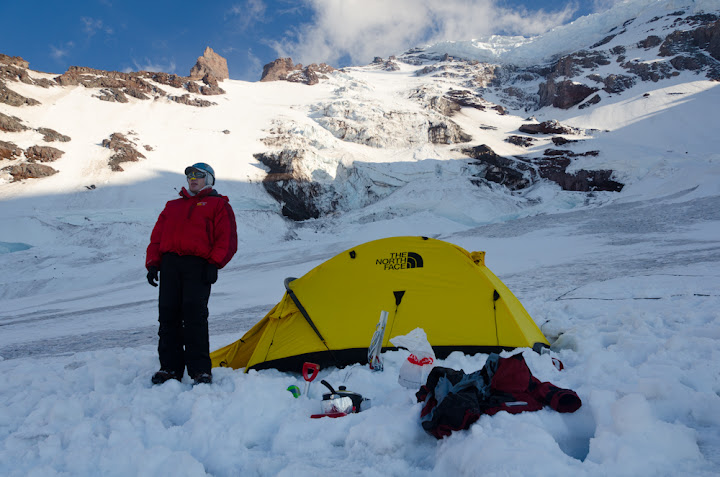 Camp on the upper Carbon Glacier below Thumb Rock and the Liberty Wall.

It isn’t normal for both of us to be wide awake before the alarm goes off for a 1am alpine start, especially with only 4 hours of sleep. Maybe it was the howling wind, rockfall, and collapsing seracs that kept us up. Or maybe we were both psyched for the climb. Or maybe it was both. Whatever the reason was, the adrenalin coursing through my veins made a quadruple-espresso morning pick-me-up seem like weak sauce.

We were marching up the slope towards Thumb Rock before 2:00 AM. The wind had stopped, and so had the rocks. The sky was clear. The snow had even firmed up and our crampons bit in to make solid footholds. We both felt secure enough that we forwent pickets and moved fast instead – hell this was really fun! We blew past Thumb Rock and headed up the left-hand route above. By 5:00am had caught up to the party in front of us at the Black Pyramid. The lights of Seattle glimmered in the west, the sun rose in the east, and the Carbon Glacier sprawled out below. The slope got a little steeper and we didn’t feel like passing the party in front, so we took some time to enjoy our surroundings and began simulclimbing with pickets for protection. What a great place to be! 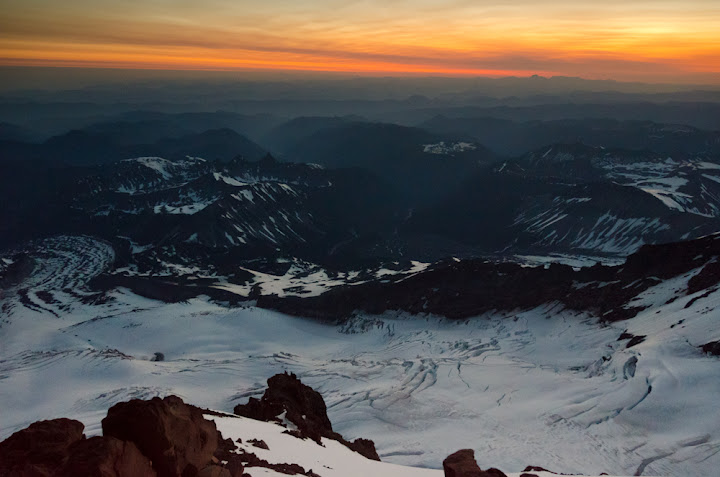 The bergshrund at the amphitheatre was in good shape – there was even a thin snowbridge that would allow you to walk across on the right hand side. The party in front elected to belay across that route. This would obviously take time, and I had dragged tools all the way up there, so Nick and I decided to climb the ice on the left hand side. The ice was in great shape and really positive, one simple pitch followed the other. In some areas snow had covered the ice-cap and then a layer of ice had formed on top – the best pro here was achieved by smashing the surface ice and then driving in a picket. Nick and I swapped leads, me with my tools and him with our two mountaineering axes. The sun was out in full force, so it was nice to come over the top and into the cold wind on the summit of Liberty Cap at around noon. We made it! 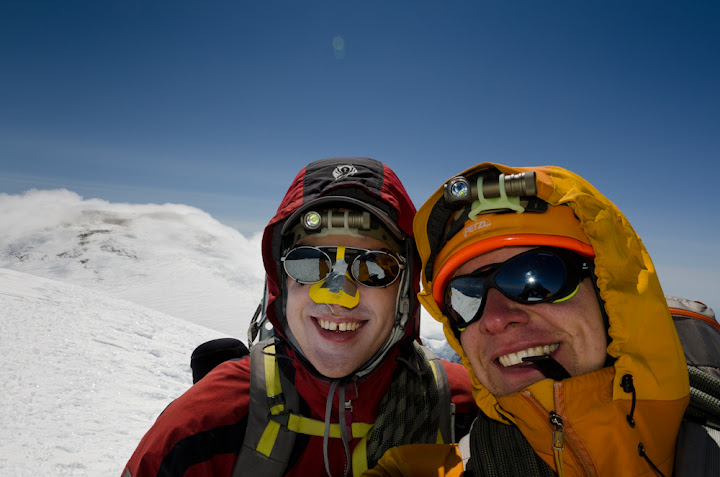 We walked over towards Columbia Crest to bag the true summit as clouds moved in to cover it. Both of us were bagged – 14,000ft of altitude, plus 11 hours on the go, plus only 4.5 hours of bad sleep the night before were adding up. We discussed the option of camping on the summit and dismissed it due to the high winds up there. Instead we slogged on – we were both completely out of water now too. It took 2 hours to reach Columbia Crest at what seemed like a snails pace. We high-fived on the summit in a white-out and began the walk down the Emmons Glacier route right away. The trail was wanded and well beaten from the numerous guided parties that take this route and we made decent time. When we finally reached Emmons flats at 4pm I was done. Nick bravely floated the idea of melting some water and continuing on down to Glacier Basin but I had to veto that. We pitched the tent and started melting and chugging litres of water. Again our state-of-the-art pot came in handy – it is much easier to pour water into a water bottle when your pot has a real rubber-coated steel handle instead of spondonacles or a multitool! After rehydrating a bit I passed right out – Nick stayed up just a little longer to take some pictures.

The wind picked up again in the night and hammered the tent again. I awoke with a start to a loud snap and a partially collapsed tent in the middle of the night. Fortunately it turned out that nothing was broken – I’d just forgotten do do up all of the velcro internal fasteners in my tiredness. We pushed the walls back out, re-did all the fasteners and went back to sleep. Some headlamps passed us on their way to the summit in the early morning but otherwise we both slept soundly for 11-12 hours straight. We woke up to another beautiful and rapidly warming day at 6am and lazily packed up. We enjoyed the facilities at Shurman, and noticed a party scrambling up the rocks of Steamboat Prow. This looked like fun so we took this route out, and it spit us out right at the top of the Inter Glacier. A long enjoyable glissade down the Inter Glacier was followed by a quick walk out to Glacier Basin. We closed our climbing permit and sprawled into the car shortly after 10:00am. The drive back was punctuated only by relaxed conversation, more mexican food, and a stop for cheap gas and beer. What a great trip! 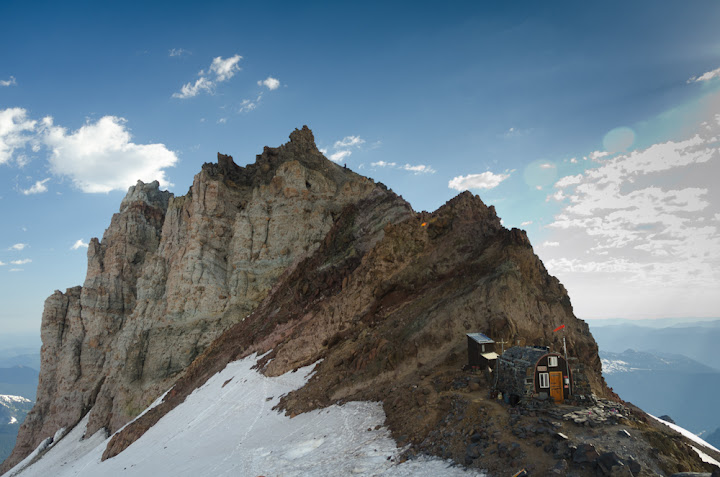 Scrambling up over Steamboat Prow to reach the top of the Inter Glacier is highly recommended!

Gear beta:
We took 4 pickets and 5 screws – this worked well. We took one 70m 9.8mm rope – this worked but a 60m half rope would be preferable. A 30m rope might even work but the rap off Curtis ridge would be very tight. Route was all snow around 50 degrees except for a couple cruxes which steepened a bit and the ice pitch at the top. 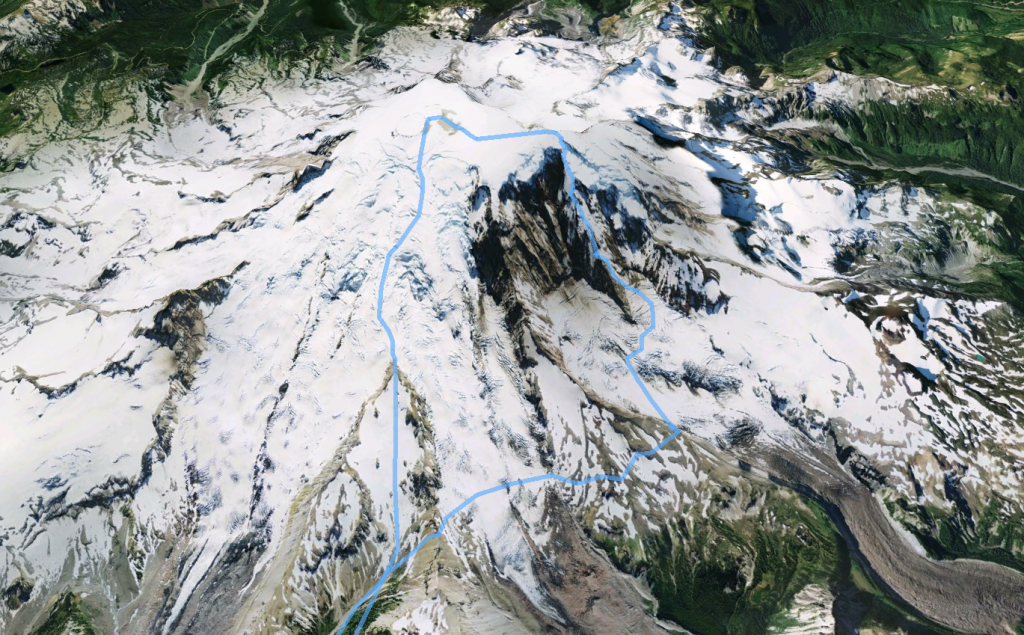