I arrived at the club room on the August 29th to meet with other people interested in heading up to Mountaineering Camp. After some discussion with those in the room, it seemed like the Chehalis Range didn’t suit our skill level or our appetite. After some discussion, we decided that the Joffre Group was exactly what we wanted to do. We dubbed it Pirateering Camp. We would summit Joffre as a group via the Southeast Face, and split up for Matier, summiting via either the Northeast Spur or the Northwest Face. After some discussion, I knew that I wouldn’t be able to leave until later in the day and the only person available to come later in the day wouldn’t be available until 2pm. We’d leave Saturday, get to the trailhead, and power up to the col, including some headlamp wayfinding. No big deal. A couple more people got in contact with me, and in the end we had a car of four people leaving in the early morning, and a car of four leaving at 2pm. Two people from morning car would traverse the col from the Joffre Lakes side, and two would take the Cerise Creek route. We’d meet at the col on Saturday night and plan our ascents from there. What could go wrong?

Around 12:30pm, I left my apartment to go pick up Julien at 1:15. I never leave early for anything, so things were off to a great start. I merely needed to stop at London Drugs to get some poo bags and some snacks for the trip. As I stood in London Drugs, I got an email from Kyle, who I was supposed to pick up at 2. He’d missed his bus, and would be an hour late. Oh well, I figured we’d just faff at MEC until he was ready. We couldn’t leave without him, as he had one of the tents. I didn’t think it was a good idea to be attempting to gain the col that late, so I thought we’d just stay at the hut. I picked up my supplies, and headed off to UBC. As I arrived at UBC, I immediately got stuck in traffic on Marine Drive, heading towards Totem. It suddenly dawned on me. It was September 1st. Move in day for residence. I had not counted on this. I took a u-turn to turn around on Marine at the earliest possible moment. I thought that after five years at UBC, I’d know how to avoid this traffic, only to find every single road blocked off. I got stuck again, this time beside Thunderbird Residence. Marine Drive was tantalizingly close, but the road was again blocked off. I was directed south, and ended up right back where I started, albeit with no traffic this time. I picked up Julien, left UBC, picked up Conrad, got to MEC, and picked up Kyle without incident. Julien decided to pick up a sleeping bag in lieu of his planned down jacket/ski pants/mid layer combination. It was 3:20 at this point. As I left Kitsilano, I immediately hit traffic heading to the Lions Gate. It was almost 3:50 before I got onto the bridge.

After breaking every single speed limit on the way to the trailhead, and finally finding the time to eat something for lunch/dinner, I arrived at the trailhead. There was one thing wrong though: no car from the other group. After some discussion, we decided that the group had likely decided to all do the traverse, and wanted a ride from me back. If they’d cancelled, we would’ve received a text. After some gear/car faff, we were on our way 7:20pm up the trail. We made reasonable time, making it to the hut by 9pm. My short stubby legs can only move me so fast. The hut was already occupied by a couple others, and we discussed our plans for the following days. After some discussion and snacks, we decided that a good night’s sleep was more important than an early start. 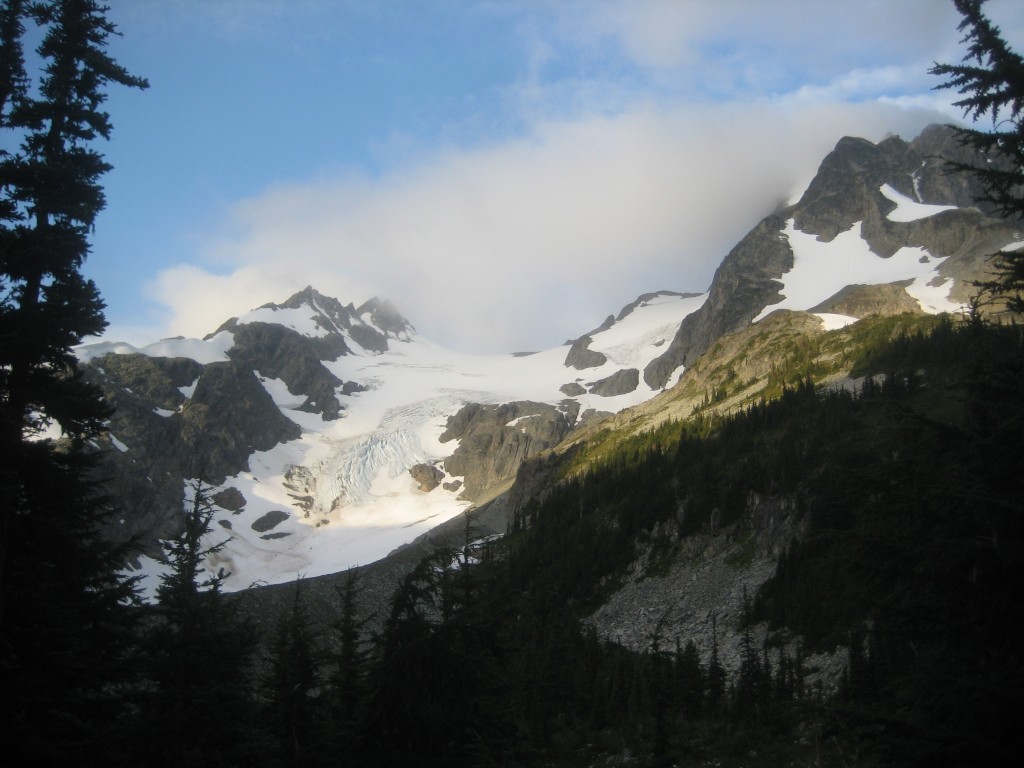 After a surprisingly cold night, and a quick breakfast, we were moving at 8:15. Following Alpine Select’s and our hutmate’s guidance proved to be more difficult than it would have seemed. We followed the trail towards the Anniversary Glacier from the hut about 300m, realizing quickly this might not be the best route. We backtracked, walked into the forest, did some minor bushwhacking, and found nothing resembling a trail. We decided to try heading up the moraine beside the glacier. After seeing a rather sizeable boulder in our way, we decided to try bushwhacking again. Luckily, this time we found a cairn-marked trail. Success! (or something like that). We followed the trail, going between snow patches and moraine without much issue. We began our ascent up the snowfields to bypass some of the scramble sections. Along the way, I crossed the thinnest snow bridge I’ve ever been dumb enough to cross. I would guess no more than 20 cm thick at the thickest, and it was a good five metre drop below, and all the while we weren’t roped up. Luckily, we avoided any real mishaps. At about 1:15, we started up the scramble on chossy rock, dislodging loose rocks every three metres it seemed. I was noticeably lagging behind. I was also getting hungry, and rapidly becoming miserable. Around 2pm, I told my partners that I needed lunch, and either they go on without me or they wait. I was fine either way. With time becoming an issue, and ominous clouds on the horizon, we all decided it was best for them to finish the ascent without me, and I would meet them where we’d dropped off our gear. After about 30 minutes of enjoying the view from my sitting rock, I decided to start my down climb to our gear, since I wanted to protect our gear from what looked like oncoming rain clouds.

I slowly and carefully descended. I eventually passed the snow bridge from earlier, and having caught site of our gear, I decided I’d try the snow for the rest of the descent. Within two steps, I had to self arrest. I stood up. One more step, and another self arrest. After two more self arrests, I looked up at where I had gotten onto the snow. I was perhaps 15m lower. I decided that cold, wet, and hungry was not the best combination, and continuing on snow wasn’t the best idea. After I enjoyed my lunch, I made the descent to our gear without further incident. A bit of time later, I saw my partners descending down the rock face. As I sat there contemplating the philosophies of Kant vs. Nietzsche and the economic theories of Keynes vs. Hayek, I suddenly heard all three voices yell “ROCK!”. Thinking that was a rather inauspicious sign, I stood up, looked over, and found a bit of cover. A rock about 60 cm in diameter flew off a ledge perhaps 100m to my right. It hit another ledge, broke up, and a sizeable stone whizzed by me about 10m away. Luckily, nothing hit me. My companions had summited successfully, and enjoyed the whiteout views from the summit of Joffre. After the group made it down to the gear, we decided to follow the tracks we saw on the glacier. We roped up, and started our ascent up to the col. The ascent was smooth. The col was a bit windy to set up camp, so we decided that we would camp under the Aussie couloir. We assumed this is where we’d meet the group from the other car. Confused, we found a barren glacier, with no one on it. We set up camp, enjoyed our dinner, filled our hot water bottles, and saw a few headlamps at points throughout the evening. We retired to bed with no intention of waking up anytime soon.

The morning view from camp.

I woke the group up at 8am. We faffed for a bit, cooked up breakfast, melted water, and took down our camp. As we were in the middle of taking our camp down, we noticed a group of four roped up, coming in our general direction. In the distance, one of the jackets looked familiar. The group eventually came to our camp, and lo and behold, it was our missing companions. Our suspicions were correct: the group had all decided they’d try the traverse. Their first attempt up Rex’s Pillar resulted in a rather dangerous fall from one of the members. The fall resulted in some rather major bruises and scrapes, but beyond that, everything was ok. They set up camp not long after. The following day, they had set up protection every 30 metres and made the summit of Slalok, then set up camp again. When we met up with them, they had no intention of summiting Matier with us, and left to return to the road via the Cerise Creek trail. I’m not sure how they made up the 7.5km between the trailheads, but they made it back to Vancouer safely.

We began our trip at the alpinest of alpine starts: 11am. We had beautiful weather, with mostly clear skies, and enough clouds to keep the sun from being problematic. We began our approach across the Matier Glacier, leaving our heaviest items on a rock outcropping at the earliest opportunity. We decided against roping up on the steepest section. We preferred one person to hurt themselves rather than all four of us, should something happen. The scramble was pleasant, coming out onto the exposed ridge leading to the summit. We enjoyed our lunches, and then began our descent.

The northwest view from the summit of Matier

The east/southeast view from the summit of Matier

Downclimbing the route only involved a couple tricky moves, and passed rather quickly. We descended the snow slopes back to our gear without incident, enjoying the perfect snow for heel stepping and front pointing, and re-packed our bags. We roped up again, headed to the col, and descended down the Anniversary Glacier. We found the route we’d taken on the moraine/rock leading to the Joffre route, and followed that back to Keith’s hut. We recharged a bit on bars and water, took care of business in the outhouse, and started down the trail. We safely made it back to our cars at 8:20pm, 49 hours from when we started, a tired but happy bunch.