Posted on September 12, 2012 by Laurent Roberge

My first trip with the VOC! I had done a lot of hiking in my pre-VOC life, but never much scrambling. I decided that a beginner friendly trip to Locomotive and Face Mountain would be a great introduction.

On Saturday, August 25th I was picked up by Val Williams and Brent Seal at 6:45 am. I was in a kind of half-asleep state for most of the drive up to Pemberton, where we met up with Shane Duan, Adriana Muja, Annie Maurer, and Marc-Antoni Goulet. After driving up the Pemberton valley for a while, we turned onto the Hurley FSR. We quickly gained elevation up the switchbacks and my smile steadily grew as the air got cooler and fresher (I love that mountain air!). We set off around 11:00 am and the trail soon became very steep.

Shane had told us it would be a short hike up and that we should feel free to pack heavy. It was indeed a short hike; not even an hour and a half. We got to camp in time for lunch and Shane promptly pulled a cantaloupe out of his backpack. Great! Fresh fruit for everyone. Later on we learned that he‘d also brought a very large brownie, bacon, eggs, roast beef, and….. a bottle of wine. Talk about luxury camping! I wouldn’t have been surprised if he had a king sized bed, complete with duvet and pillows in his tent.

Locomotive (left) and Face (right), with Tender Peak in between

After lunch, we set off for Locomotive. We hiked mostly on rocks and snow, ending up in a bowl with a little lake at the bottom. We climbed up the steep snowy sides of the bowl and on to the ridge leading to the peak. From this ridge we could see the Pemberton valley aaaaand….. A huge plume of smoke and dust. 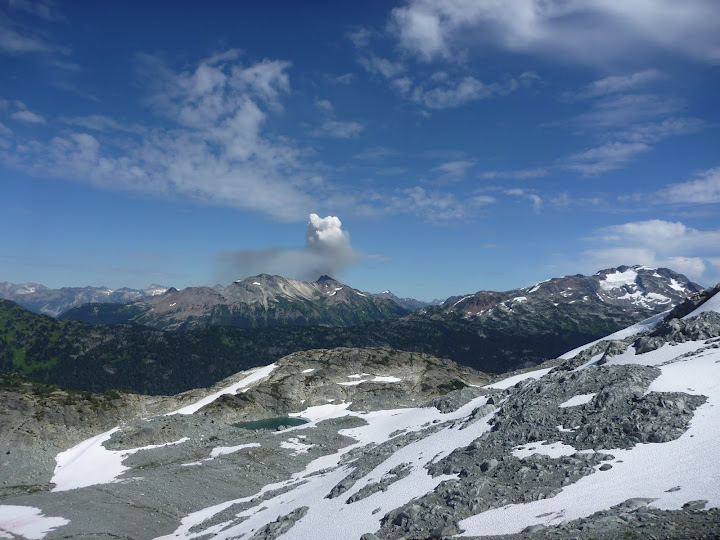 Just kidding. It was a forest fire near Birkenhead. The ‘volcano’ wasn’t the only weird thing we saw. As we approached the peak a large herd of jellyfish-shaped clouds marched northwards above our heads. 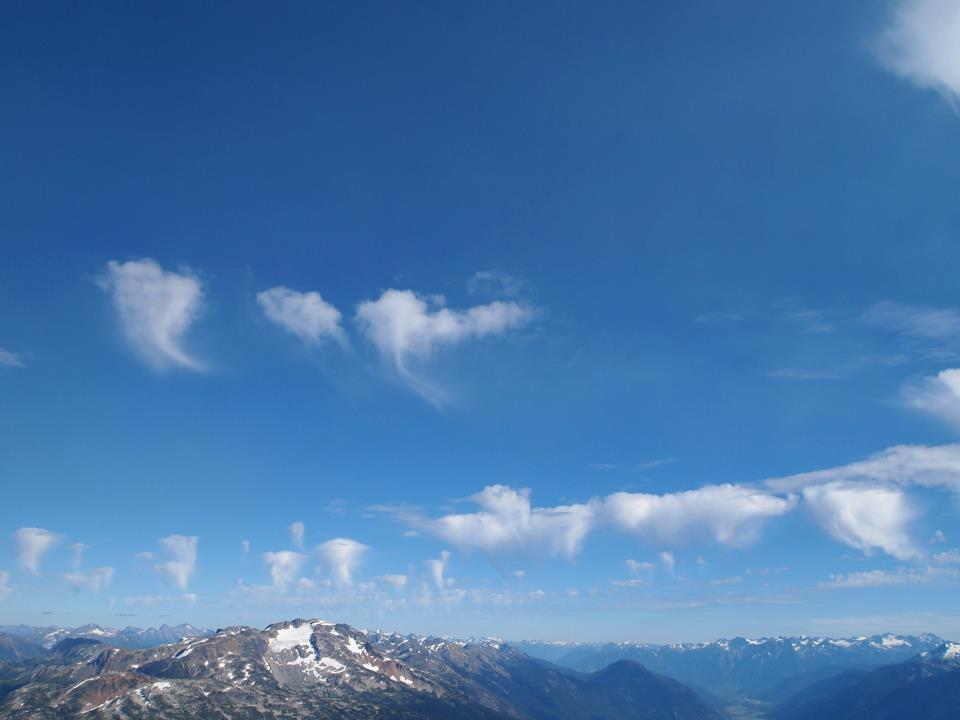 The view from Locomotive was amazing! The entire Pemberton valley (and all its famous potatoes) was visible below us. We also got a great look at the route we would take on Face Mountain the next day.

A great view of Face Mountain from Locomotive. We could see the entire route we would take the next day. 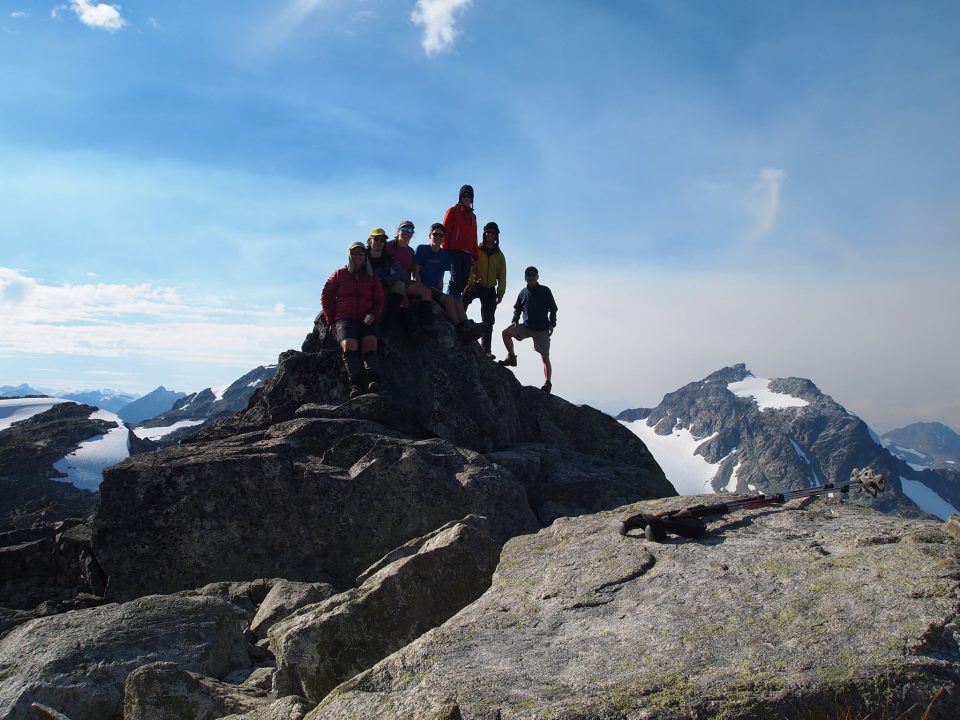 Group shot on the summit of Locomotive

We lounged around on the peak for a while before sliding down the snow slopes back to the campsite and Shane’s much-anticipated bottle of red wine. 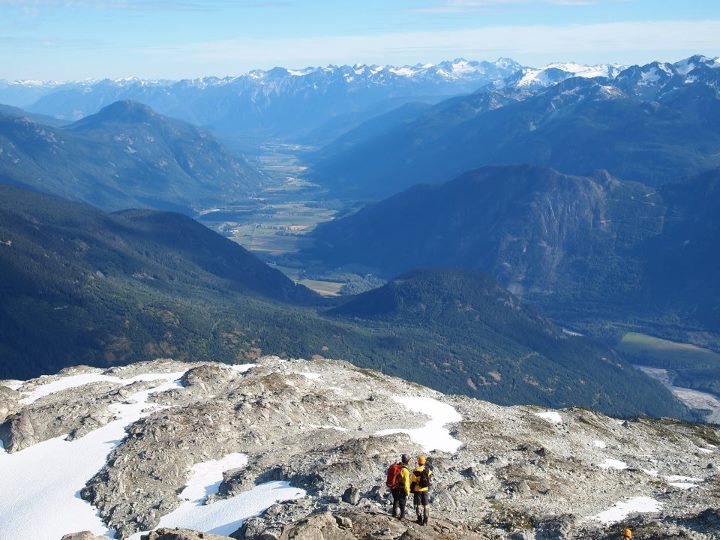 Brent and I looking at the Pemberton Valley

On Sunday we left around 10:00 am for Face Mountain. The scramble began with a stream crossing and then a walk up some steep rocky rubble at the base of a cliff. We circumvented the cliff on the north side and ended up with a great view of a lake below Locomotive Mountain. At this point Marc-Antoni decided to stay and enjoy the views of the Locomotive, Tender, and Face, as well as the brilliant blue lake and the icefall just above.

The lake and icefall, with Locomotive in the background.

The rest of us continued up a steep gully with very loose rock and dry, dusty soil. This was probably the most difficult part of the scramble. After that, we ended up on a flat ridge and then traversed some snow and boulder slopes to another gully. At the top of the gully we walked out onto a nice snowy slope that lead up to the peak. Another incredible view! The north side of the peak was a sheer cliff and far down in the valley we could see the Hurley FSR winding away northwards to Gold Bridge and the mountains beyond. To the south we could see Train glacier, Locomotive Mountain and the Pemberton valley behind it. 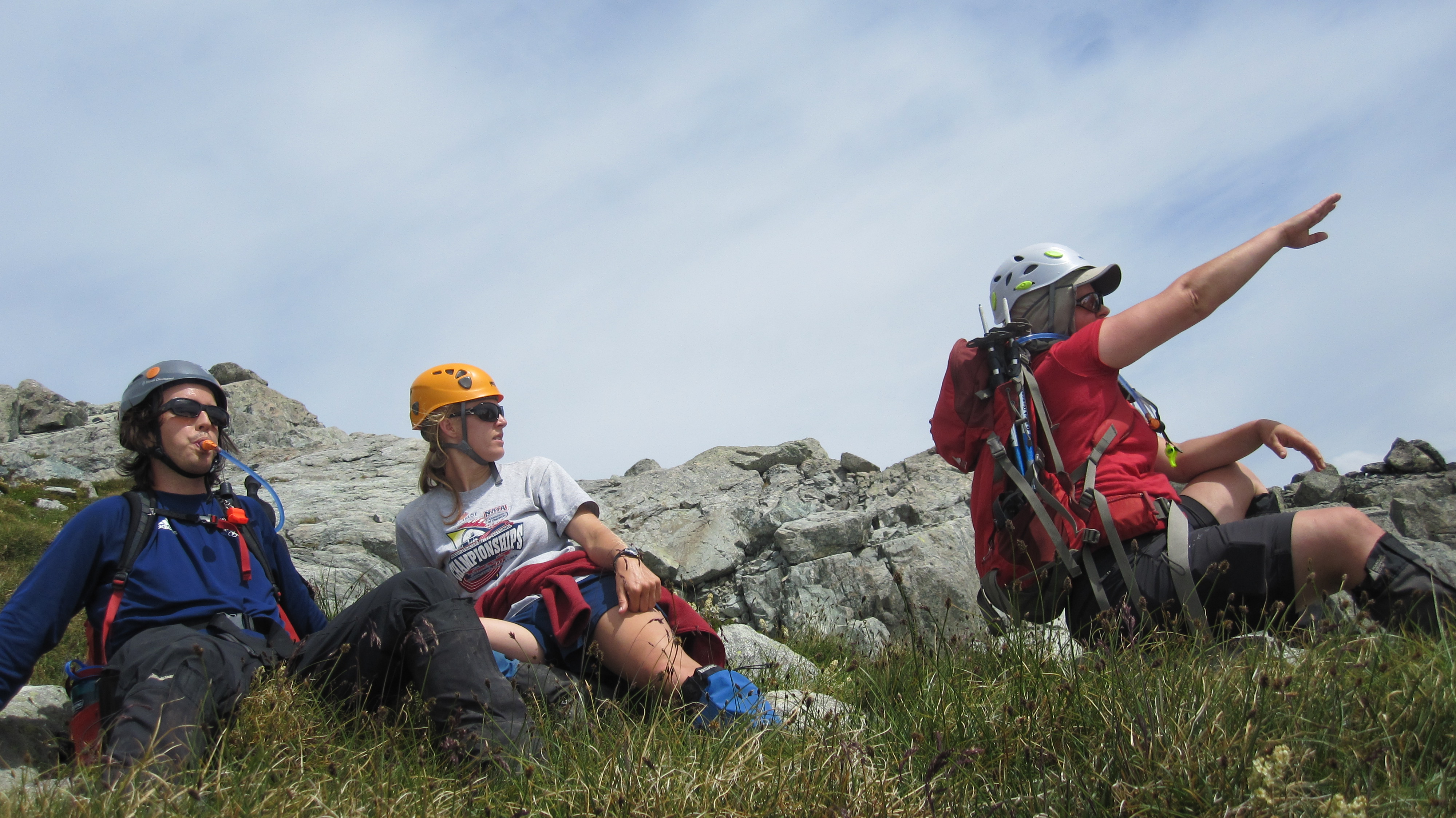 Adriana pointing out the view to Brent and Val

After some summit photos we took out our lunches and were immediately joined by a hungry raven. He probably hangs around the peak all day waiting to steal food from unwary scramblers. We ate lunch under the greedy eye of the raven and then headed back down to the snow slope. 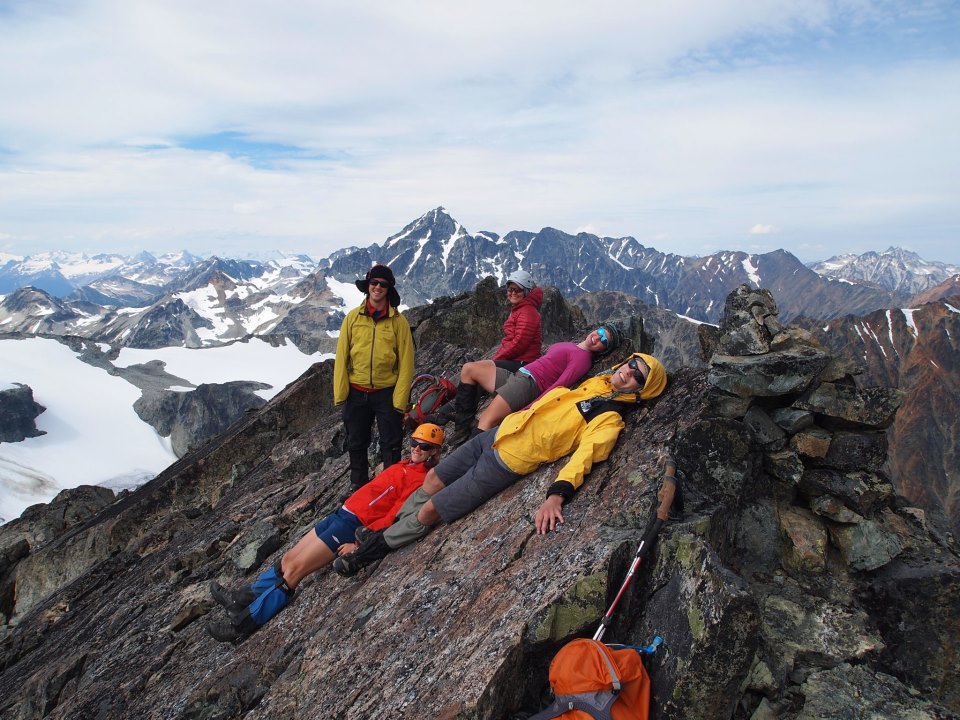 Hanging out on the peak

By now, Adriana had perfected the bum slide technique, steering with her poles like a canoe paddle. She looked a lot more in control than the rest of us slipping and sliding down the mountain. The descent was fairly uneventful except for a sizeable boulder that suddenly decided to give in to gravity. Luckily we had noticed it was loose on the way up and none of us were in its way when it tumbled down. 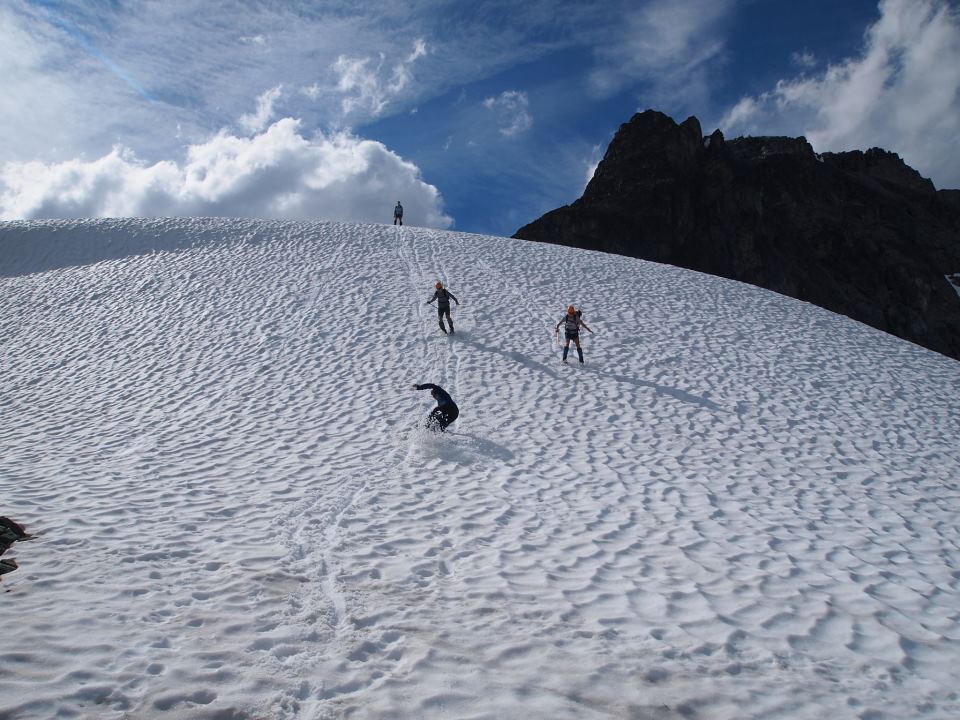 We met up with Marc-Antoni, who had explored the lake and a waterfall just below it, and then headed back to camp. Shane jumped into the water and swam around a little. Val, Brent and I packed up and headed down towards the cars as the others hung back, wishing they didn’t have to leave the incredible scenery. It was a quick drive home. We stopped off in Whistler for dinner and were home by 10:00pm.

The weather was wonderful, the people were great, and there were surprisingly few mosquitoes. What a trip! I think the VOC has trapped me in its web.