The intro to backcountry trips have had an eventful recent history. I don’t know the exact details but the last two trips involved either severe hypothermia or actual helicopters! I have previously commented that I’ve enjoyed many painstakingly organised, smooth as you like, fantastically enjoyable VOC trips. I have not, as yet, experienced one of those trips where it all goes to shit. Experienced the inexplicable joys of “type two” fun.  Experienced the infamous VOC epic. History suggested this might be a good option to break my duck!

Our organisers, I think, were having similar fears. This anticipation led to the splitting of our merry bunch in two to keep group sizes easily manageable. At the pre-trip we had the option of going to

Who the heck chooses number one? What follows is the tale of Fat dog creek. In other attempts to mitigate the near death experiences that history would dictate are inevitable, we had a healthy supply of sagely experienced leaders to keep the rest of us out of Harm’s way. At Fat dog creek our wisdom was flowing from the collective greatness of Caitlin, Dmitri, Anne and Matt. On the other trip “instructors” outnumbered “trainees” by about 2-1. I guess someone thought the combination of all the historical bad omens previously mentioned with Jeff’s previous bad luck organising beginner friendly trips was just asking for trouble and needed some extra special care…

So, as has become the ritual for all VOC trips, we all met at Tim Hortins on the Saturday morning for some breakfast and general chit-chat. Its taken some time but I’m starting to find a taste for Timmie’s oatmeal, even if it is insanely sweat! However, in a break with standard VOC tradition I was not enjoying the sweetest oatmeal Squamish has to offer. The winds of change were blowing and this time we found ourselves in a town called Hope, no sea to sky highway for us! This was the last us Fat dogs saw of the somewhere something east people. For news of their adventures we shall need another trip report.

We left Hope perfectly on schedule and full of excitement for the weekend ahead. We reached the parking lot without any fuss and, after a quick refresher on how to use a beacon, headed up the trail. The trip was definitely of the laid back variety. We had no worries of getting anywhere quickly and no long list of objectives to worry about. Despite our laid back demeanour, there was still the feeling that this trip should be a bit more instructional than the typical beginner friendly experience. Anne was particularly revelling in her role as teacher. Each fork in the road (maybe that should read THE fork in the road…) would result in a map being examined by us beginner folk to decide where we should be going, rather than blindly following our trusted leaders. After a lunch break more knowledge was bestowed on us students of snow with the digging of a mock pit to determine potential avi danger, we were very safe! Clearly it was decided that our traveling along the largely flat trail was not sufficiently instructive so we headed off up to the left for an intro to skush wacking (skush wacking is a term I’ve made up deriving from ski-bush wacking, bush wacking on skis. It’s a good term, people should use it!). After half an hour or so of practicing our kick turns on the steeper slopes, and making our way through the trees, we returned to the main trail (a snow covered logging road) and made our way to where we planned to stay the night. 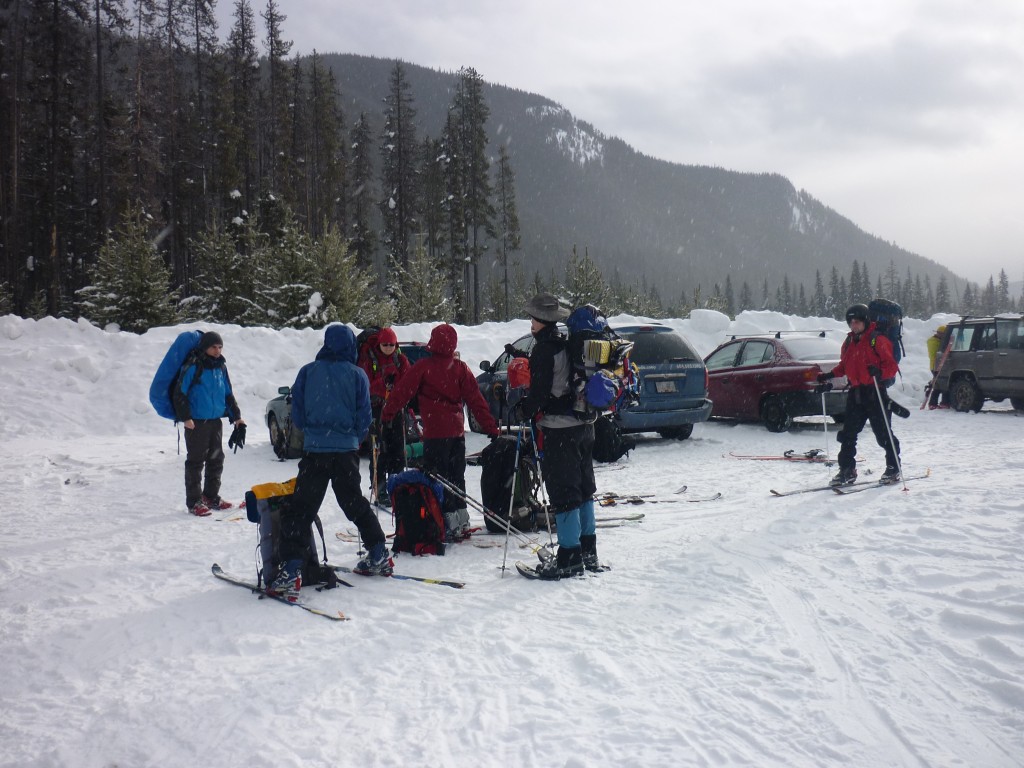 Our crew reading themselves for what would surely be an unforgettable weekend! 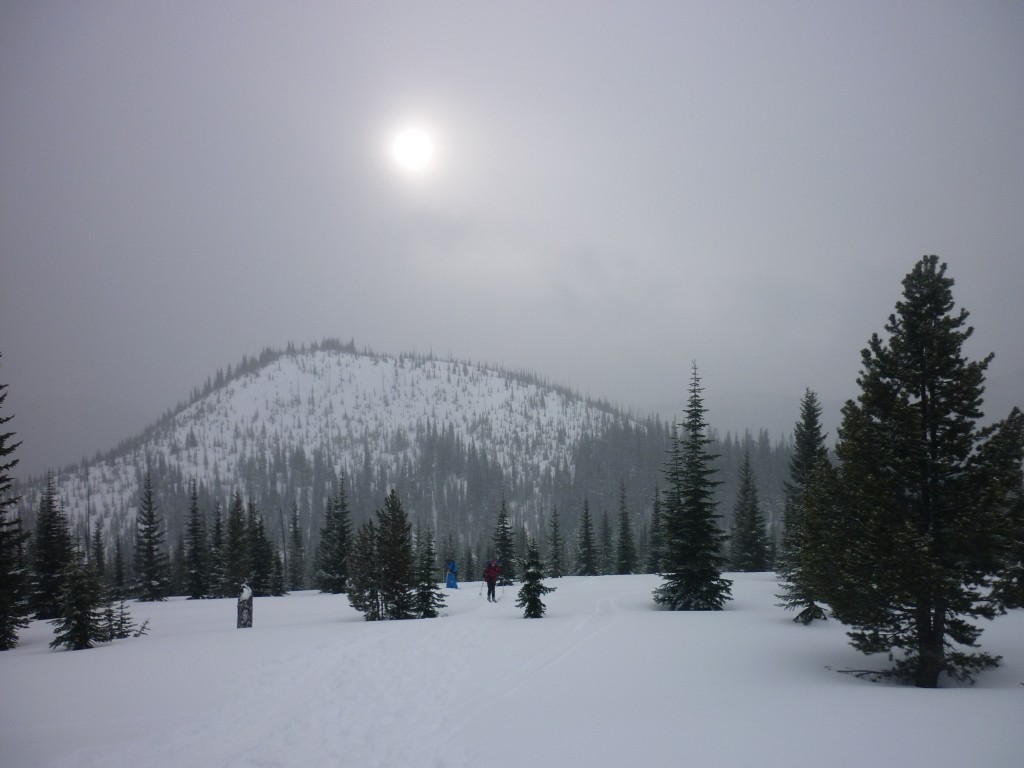 By the time we had our tents set up there was not much time left at all before dark. This did not stop a few of us, headlamps in tow, going for a quick 15 minute run down the adjacent slope, it was why we were here after all! By the time we got back, nice people who weren’t me, had dug out a (very) large kitchen for us all as well as the most exuberant toilet hole pit thing I’ve ever seen (made out of snow anyway…).

It was now time for dinner, which meant it was now time for the piece de resistance for, un beknown to most Vancouverians, it was  (more or less) Burns night. Burns night marks the birth of Scotland’s most famous poet who wrote many classics such as To a mouse and Tam O’Shanter. If you haven’t heard of him before look him up. Tam O’Shanter is a particular masterpiece. It was written about 200 years ago and tells the story of a man who finishes work, goes to the pub and gets rat arsed while his wife waits at home “nursing her wrath to keep it warm!”. Any government propaganda suggesting binge drinking is a modern ailment afflicting only the delinquent youth of today is clearly wide of the mark! Anyway, as tradition would have it, and in complete mockery of the educational aspect of our trip (in particular the “this is the sensible way to pack” chapter), I lugged a full haggis and a hefty sized pot to cook it in up with me. Haggis, for the uninitiated, is a Scottish delicacy that is possibly best, though certainly misleadingly, described as “sheep”. Thankfully I was also sharing dinner with Lachlan because the Haggis took about an hour and a half to cook!

The long cooking time was useful though because the teaching of the other tradition, the singing of “Auld Lang Syne”, was destined to take a while. Auld Lang Syne was written by Burns and is mostly about recounting old times with bosom buddies. Most people knew the tune already, the problem was most definitely the lyrics. In the same way that Shakespeare reads like a bastardisation of the English language on account of being old, Burns reads like a bastardisation of Scotts. Now take into account that Scotts is a bastardisation of English (all be it bastardification leading to a more enlightened, fruitful and glorious tongue!) and you begin to see the problem. (Tradition should also have dictated the reciting of the poem “To a Haggis” but I quickly abandoned that idea as a lost cause, its blatant jiberish!).

The teaching process quickly adopted a familiar pattern. I would recite a line. Blank faces… I would repeat the line slower and explain its meaning often uttering “oh that’s just an old Scottish word for…”. Much complaining about the nonsense of it all would ensue and accusations that I was blatantly making up words then we’d move onto the next line and do it all again. Clearly the VOC only attracts the quickest and the brightest because this went much better than I thought (special recognition going to Caitlin who was reminding me of the lines by the end of the night!). Then all that was left to learn was the “dance”. Everyone stands round in a big circle, holding and shaking hands, while singing the verses. Then comes the chorus and everyone in the circle, still holding hands, heads into the centre and out again repeatedly. Alternate between Chorus and verse, remember to emphasise the word “mieeend” as loud as possible and get confused about some geese? near the end and you’re now a proper Scotsman! I can honestly say it was the most enjoyable singing of Auld Lang Syne I’ve ever partaken in, also by far the most tiring! I don’t remember it ever being a demanding process back home, but this was Burns night Canadian style, we were knee deep in snow!

At last the haggis was ready, me and Lachlan decided. It was completely the wrong colour, we both agreed, but we’d waited long enough! No one died to my knowledge at any rate… Alas, for all its bravado, our piece de resistance was a tad lacking. It was very bland. Haggis is not bland. Raiding Anne’s cooking supplies for her salt and pepper mix certainly helped but if you want to try good haggis (and you do!) don’t go to Granville Island, go to Scotland! After indulging in as much haggis as we deemed necessary, and enjoying a wee dram of whisky, Caitlin and Anne returned to the English language to serenade us with all those old favourites from the VOC song book. The rest of us joined in as and when we could. After singing LONG into the night we all retired to our tents. 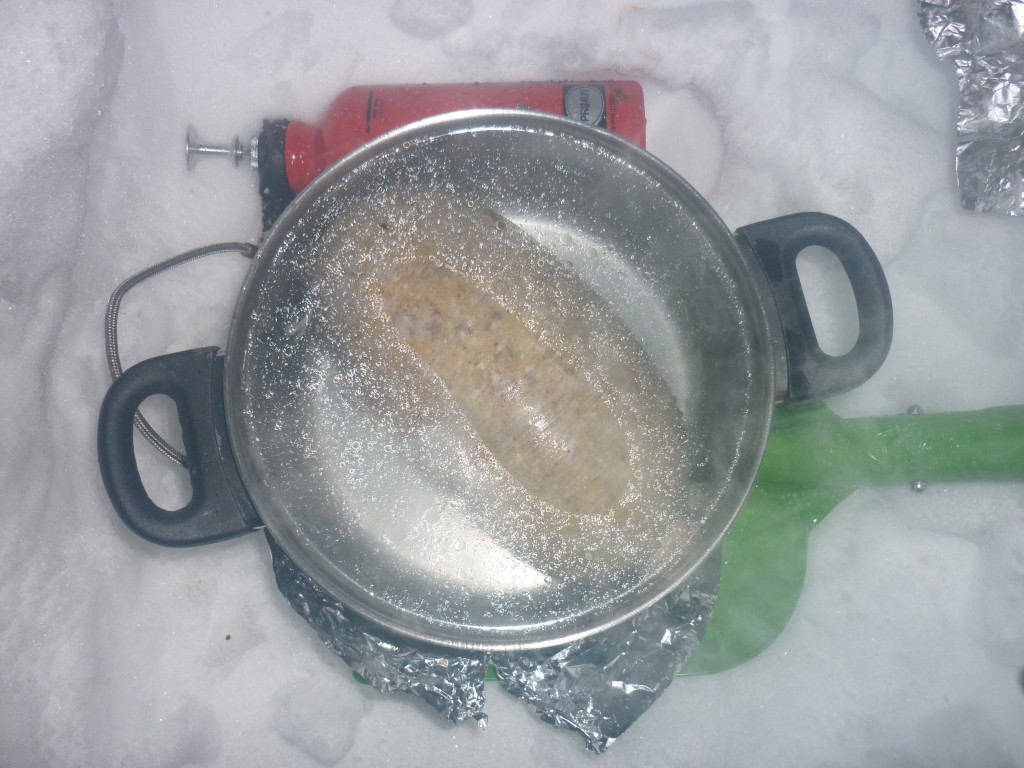 The next morning, after a leisurely breakfast, we went out on search of some skiing. Before long we came to what I think of as the perfect slope: nice powdery snow, not so shallow that moving becomes difficult, not so steep that I fear for my life, and NO TREES!! We enjoyed some yo-yoing on said slope, occasionally trying to tele turn, before returning in dribs and drabs to pack up camp and head down the logging road to the cars. The logging road was also pretty ideal. It was mostly downhill, hadn’t been reduced to ice through too much traffic and was wide enough that you could attempt to turn a bit as opposed to pure snow ploughing. Despite having a fair spectrum of skiing speeds and abilities as well as one snow-shoer we did a great job of staggering our departures so that we all arrived at the cars within ten minutes or so of each other.

This left just enough time for one more rendition of Auld Lang Syne before heading to an Irish pub for some grub and a Guinness. We even got to see a spot of hockey, the Canucks aren’t very good it would seem… And miraculously nobody broke a leg, got eaten by a bear, fell into a bottomless pit, was abducted by aliens… In short our trip was a complete success. So my sincerest thanks go to our organisers, I shall have to wait for another trip to break my duck…

2 Responses to Intro to back-country Burns suppers on skis!