So it was on this Saturday June 8th, 2013, that the first Introduction to Mountaineering took place, at Cypress Mountain. According to what I’ve read, it is meant to be a one-day introduction to mountaineering, on real snow, but not on an actual glacier, for people that haven’t taken GS1 yet, so for people like… me! Hence I hadn’t hesitated for a second, and signed up.

I personally left home at 7am, picked up by Lanny, then after we got everybody in the car, a short stop in Tim Hortons to get some energy for the day (well, at least for the morning), and here we are, at 8am at the parking lot close to Hollyburn.

Everybody’s getting ready, put their mountaineering shoes, attach their ice axe and crampons to their backpack, and thus I’m starting to get excited to learn useful skills. Only two annoying details: Where is the expected sun, and where is the expected snow? As you can see below, doesn’t look very ideal… 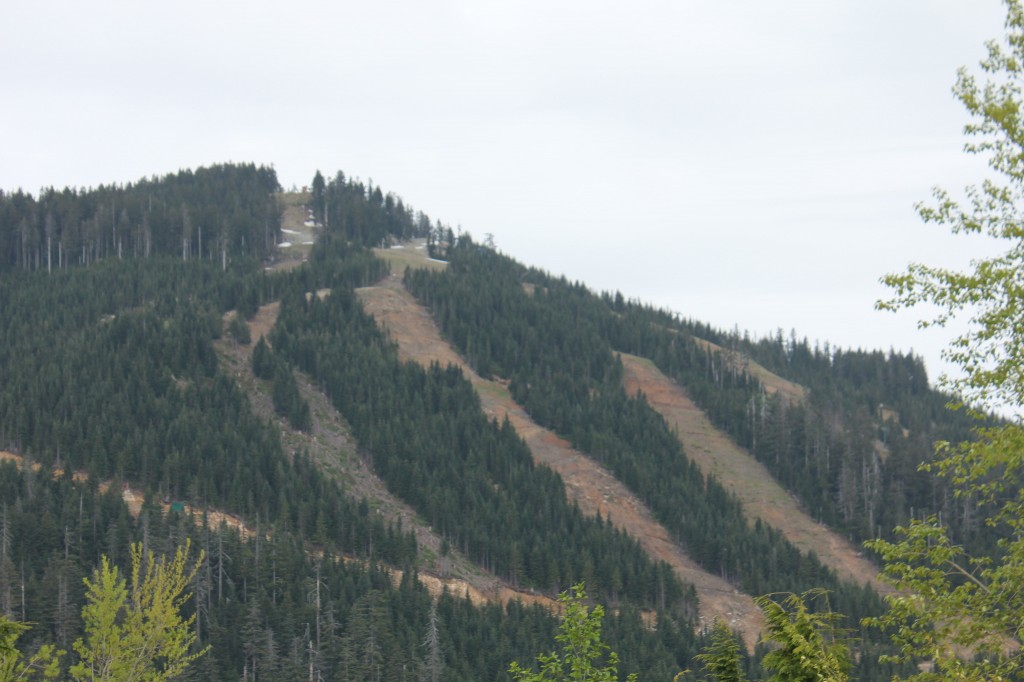 So we hiked a bit toward East along the electrical line 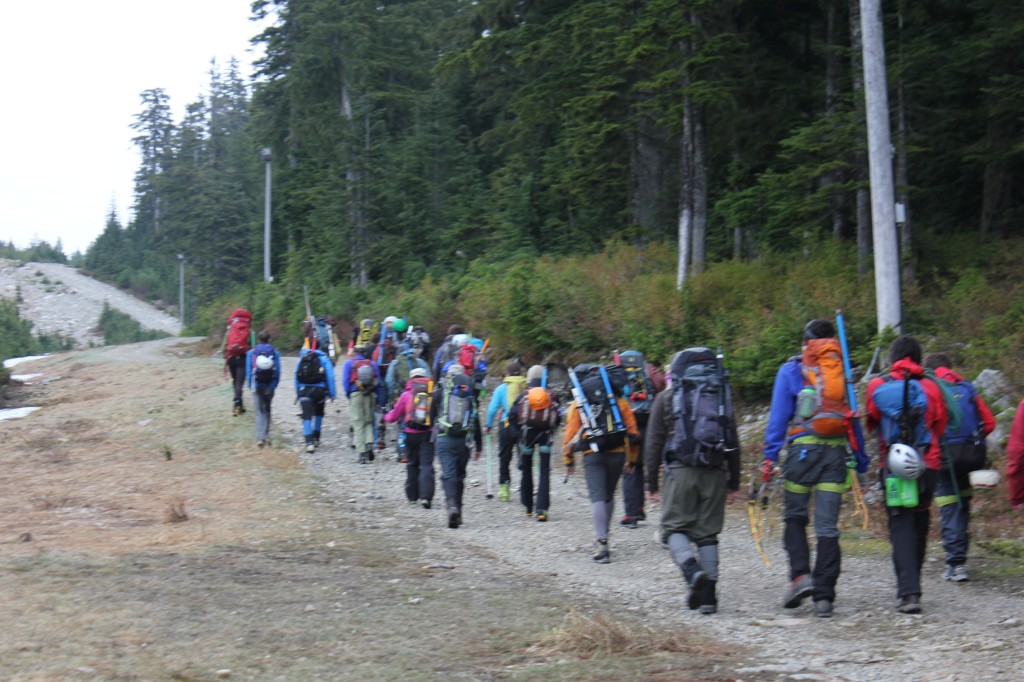 And finally we found some snow! (beginning near the intersection with the Baden Powell trail) 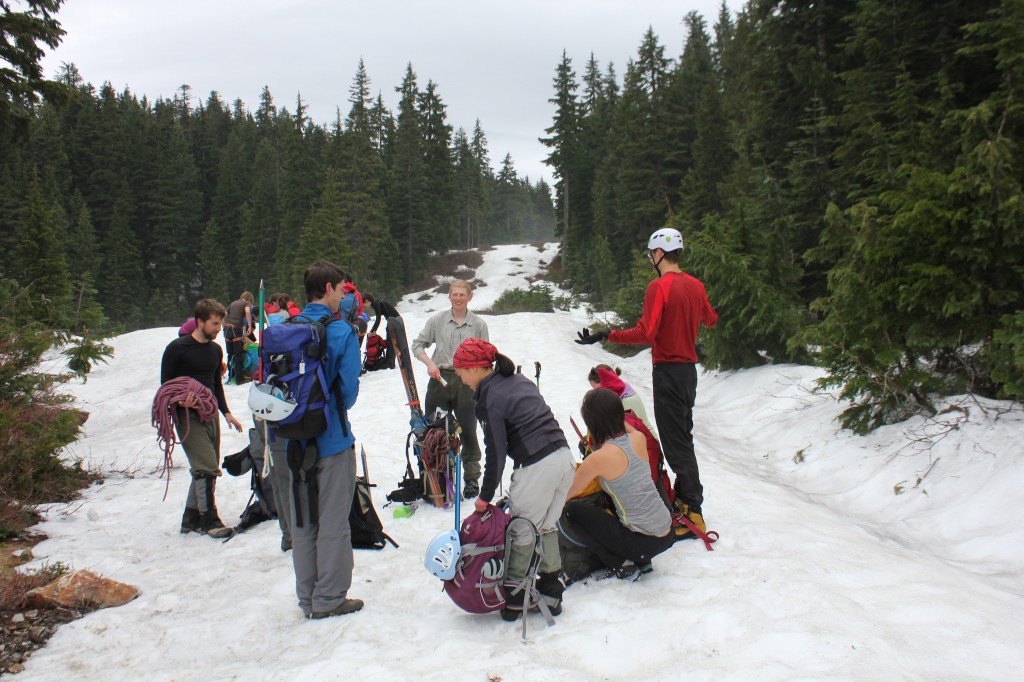 So… it was time to rope up! I was in a rope team of four people with Omid as the instructor, and so we learned how to move attached to the rope, not too close, not too far, and moving altogether in a straight line if we have to move left or right. Nothing fancy, but it was a first time for all three of us, so it was kindda fun 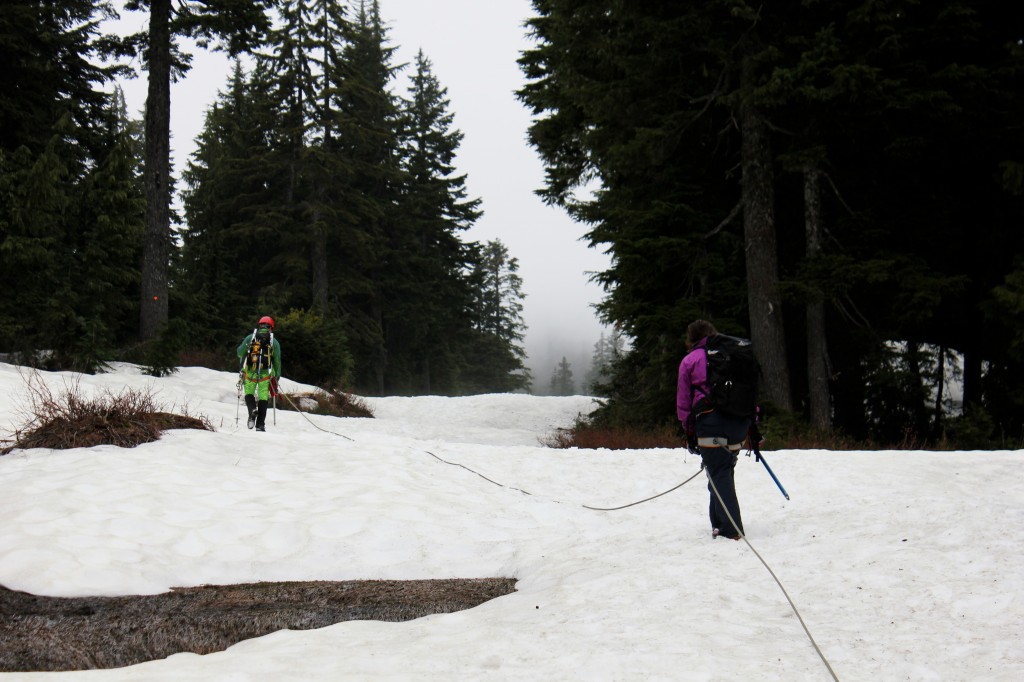 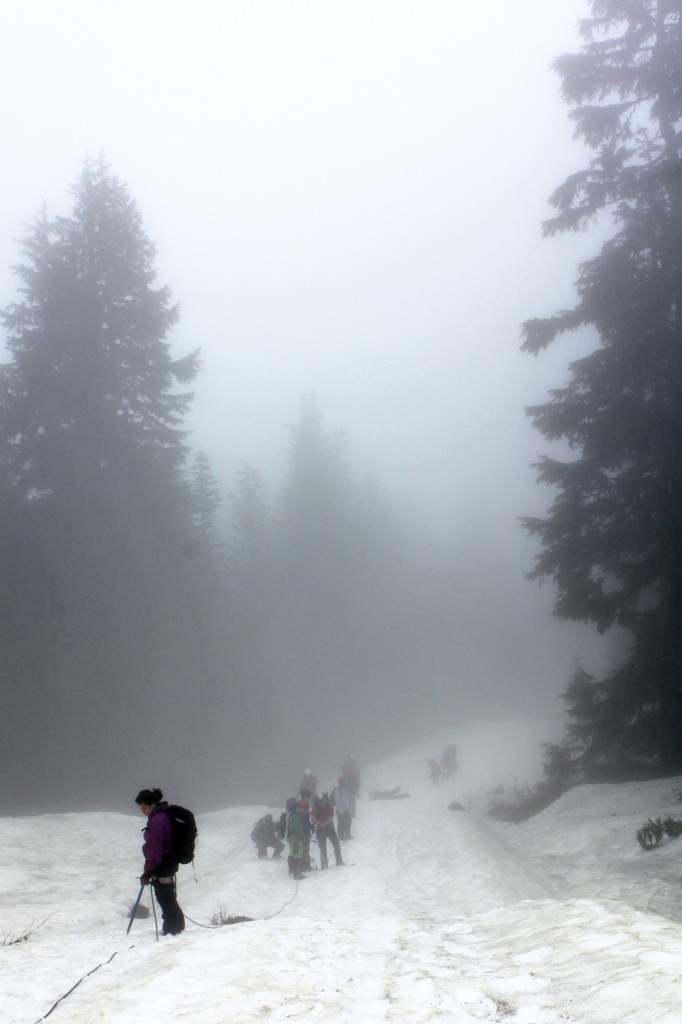 As you can see, it was pretty misty… but anyway, mist doesn’t prevent learning mountaineering skills. The different teams have split up a bit at that point, training their skills at different parts of the available terrain. In the case of my team and a few others, we practiced self-arrest in one of the few available slopes suitable for this. Some people were running then jumping into the slope to get available speed, some other got dragged by somebody else, by whatever the method, it seemed enough the learn the big ideas and practice. That was definitely the most fun part for me, although my pants were not as waterproof as I thought, and was pretty wet in the end. But I’ve actually taken this one to test it. Now I know. Better figure it out on a one-day trip than on a one-week expedition.

After this self-arrest training, we hiked up a bit more, took some lunch, and got ready to learn how to make snow anchors and pulley systems. We simulated complete scenarii of crevasse falling, by exchanging roles, except Omid, which was always the falling victim so that we could learn how to rescue. So we started roped up, then Omid simulated a fall by going into a nearby slope, we self-arrested, the closest person to Omid kept self-arrested to prevent Omid to fall further away, while the two other built the anchors and pulley system (at a certain point, the self-arrested guy could stand up when a prussik was well attached to the anchor). I’ve found it very useful, I definitely learnt a lot and got much more the big picture than in the dry school, where I’ve learnt without context to make the knot and one pulley system, but have no idea where the anchor came from, and how do we transition from preventing the guy to fall to building the system. 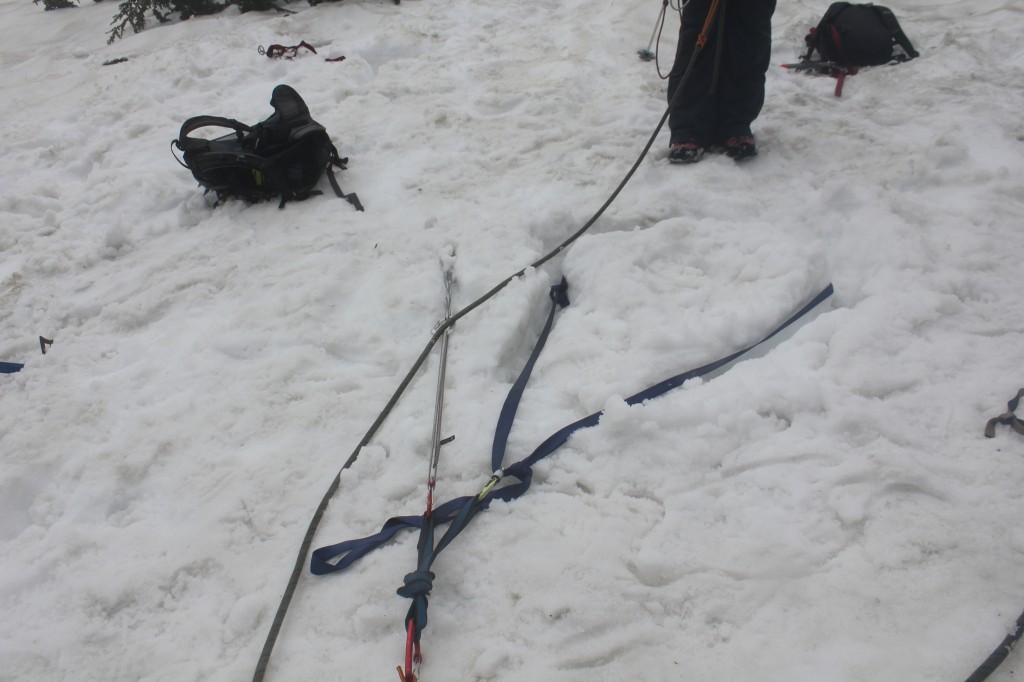 After this, my team has headed down to the parking lot. But some other were still demonstrated some rappelling skill by Julian 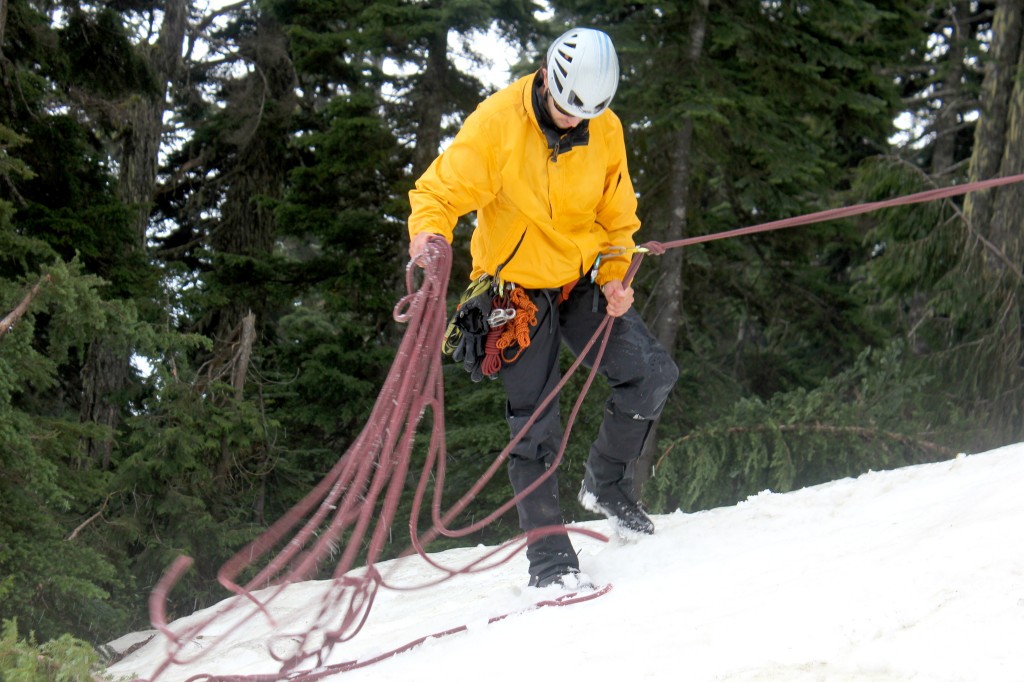 While some other decided to summit this reasonable mountain, and get jealous from Christian that was able to make some turns that he deserved well by taking his skis up there 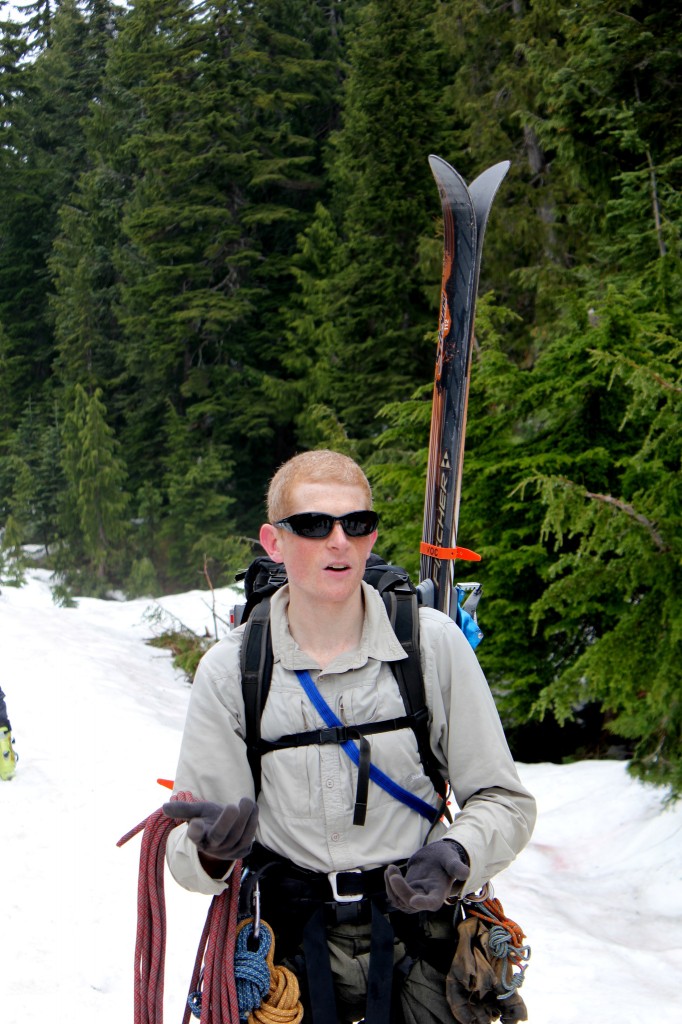 And there finished the day and so this report. We came back at the parking lot at around 5:30pm, so back in Vancouver around 6pm. All in all, I am very thankful for the Organizer and my instructor (that appear to be the same guy…) from which I’ve learnt a lot and feel well prepared for GS1, for Lanny for the car ride my up, and for everybody else to be part of the fun

Last but not least, I copy-paste here the post of Omid in the forum, to have a more experienced point of view that I can’t provide, as a very beginner in mountaineering:

> Was the snow close enough to simulated glaciers?

There was a fair bit of snow left on Hollyburn, despite the average to below average snow year. There wasn’t much left on Black or Strachan, although they might’ve provided better self arrest slopes. The biggest issue I found was finding a continuous slope for practicing self arrests, or finding something to simulate snowbridge lips. Pulley systems on steeper slopes seemed to work well though. I found a 2.5-3m drop at one spot beside a tree. I just lowered myself in and pulled hard on the rope once I was in there to simulate weight on the rope. That one seemed to work well. I did some squats to keep warm, which is better than being stuck hanging in a crevasse or moat.

We had a dry school and a single day at Hollyburn. For the dry school, we covered hitches, knots, tying into the rope, and pulley systems. We set up pulley systems outside on the grass between Buchanan Tower and Irving K Barber. We ignored prusiking, since compared to the other skills, it’s less useful, at least for crevasse rescues.

We arrived around 8am at the Hollyburn Cross Country Area parking lot. We followed the main cross country path until we got to the warming hut, where we hit the snowline. We split into the groups that we had from the dry school. During the dry school, we experimented and had separated all the people who had experience with ropes into one group. Line and Christian instructed that group, and they might have more comments on that, but they seemed to think it worked well.

We roped up at that point, discussed the necessity for roping up on glaciers, and how to evenly distribute the rope. Some people put on crampons, some people didn’t. Then we walked along the cross country path, discussing how to travel roped up, how to use your ice axe, etc. There was lots of room if people wanted to split up and practice setting up pulley systems on flat ground or inclined slopes. There were a couple gullies, one of which had a freezing cold pond at the bottom. If there was more snow, I think they could’ve been perfect for lowering people into as part of pulley practice. We also practiced self arrests. Some people got dragged, some people found suitable slopes. Many people got bruised. A few people went to the top of Hollyburn, and Christian got turns in on the way back down. Many were jealous of his skis, myself included.

I wore neon green tiger striped tights, so yes. Others seemed to as well, but they weren’t wearing tights, so there must’ve been some other reason.

> Suggestions for next time?

It seems like the best self arrest slopes were up past what would be considered the Hollyburn Cross Country Ski Area, on the trail up towards Hollyburn Peak. There was a section that was mostly trees, but past that there were steep and mellow slopes that were sufficiently long for people to practice self arrests without the runout being what stops them. There was also poop on the runout bits, which made for extra incentive to stop in time. I would probably get people to go there, rather than pulling people, but either works well I think.

Thanks to the very short approach and short drive time, I feel like we covered a lot in a single day. Another day could’ve been great, but I don’t know how much more people would’ve gotten out of it other than extra practice. I would probably hold it at Hollyburn again. If I had had more time, I would’ve prepared a presentation to show off some of the features of glaciers, so people have a bit more context once they’re learning the skills. I was planning on making a presentation to that effect, I just didn’t have time.

A last word: it was foggy the whole day, but the sun has finally decided to join for some minutes in the evening, so I was able to take a more engaging picture of the surrounding landscape 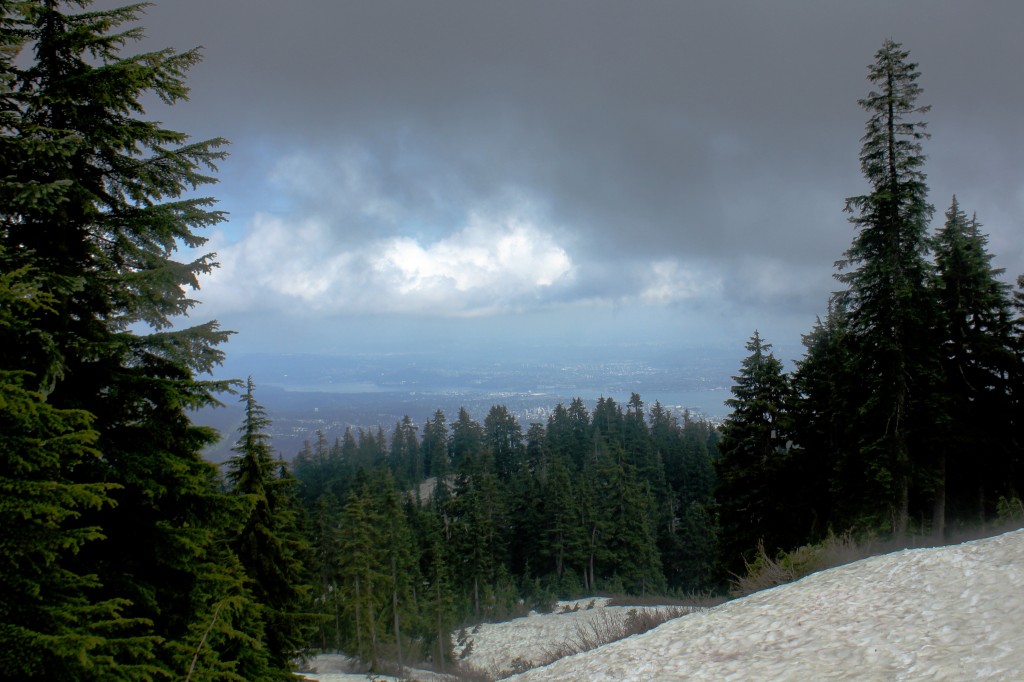 2 Responses to Introduction to Mountaineering