The weekend started with all of us meeting at Tim Horton’s in Abbotsford at 8am (well 8 ish, but hey you’re on time unless you’re the last car to arrive right?) From there we set off for the Chehalis Lake campground, and a short highway and pretty well maintained logging road later we were there! We decided that it would be a good idea to set up camp then rather than after the canyon when we were wet and cold, so tents were pitched and tarps were strung around the site, as it had been pouring rain all morning. 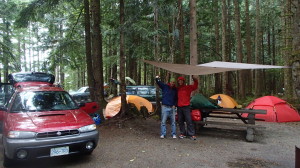 We then began to gear up, which turned into quite a complicated process as many people (myself included) were missing one thing or another – luckily some of the experienced members had plenty of extra neoprene and rope. Finally we were ready, and literally all 22 of us piled into Phil’s massive truck. 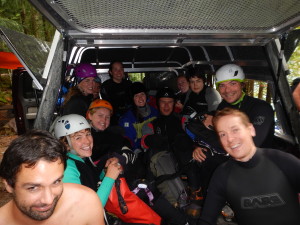 It turns out the entrance to Skwellepil creek was only about 300m up the road, so after about a minute of driving we were there! Amazingly the weather cleared as soon as we arrived, so we got an afternoon of sunshine! A few of us decided to hop off the bridge into 6 ft of water, but most scrambled around for a slightly safer approach. Canyoning with 22 people is quite timely – we scrambled down to the first rappel in about 15 minutes, and then from there it took probably around 2 hours to get everyone past the waterfall. The wait was pretty nice though – the scenery was beautiful, and there was even some bouldering to be had. 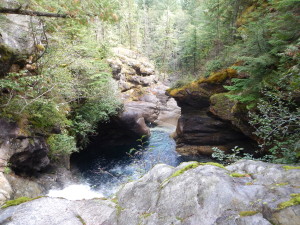 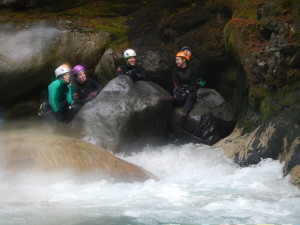 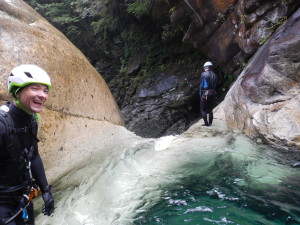 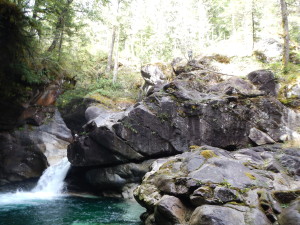 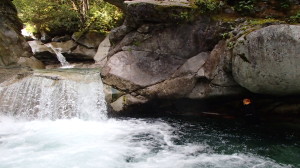 Eventually we all made it through the rappel and jumped off the next waterfall, and the group reconvened and set off for the remaining portion of the canyon: a pleasant creek walk to the lake, with the occasional group photo, salmon swim, and rock running race. 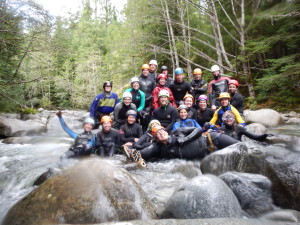 Once we got back to camp, a few of us decided to explore a bit then descend the canyon again, and the rest began setting up dinner and evening shenanigans. Our efforts to get higher up the creek proved fruitless, but with only 5 people the second run through only took about half an hour. Also sometime during this second excursion I learnt that when Caitlin asks who the youngest is you maybe shouldn’t say anything, because apparently that leads to having to write the trip report.

Back at camp the party had moved to the beach, and after a plan was made for the next day dead animals were thrown on skewers, wine was mulled, and guitars and songbooks were brought out. It was a beautiful night and the lake was warm (ok maybe the wine was warm and the lake was cold but really that works to the same effect) and the promised merriment ensued as everyone swam, danced, sang, and overall had a great time.

Unfortunately, sometime during the night it started pouring rain, and when a recon group was sent out the next morning the flow was deemed too high for sane people to descend. The days expedition wasn’t the only victim of the rain either – Dimitri’s tarp also ripped halfway across, soaking our already saturated gear. Luckily a little weather wasn’t going to stop Team Bad Idea from heading up anyways, and after a bit of faffing, Amelia, Phil, Artem, Neil and I decided the canyon was a go. 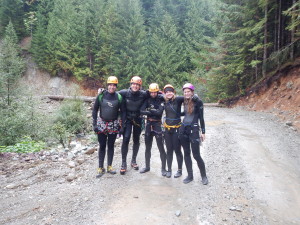 Less luckily, we ended up descending the wrong tributary of Maisal Creek, so what we thought was going to be an epic adventure turned into more of a 4 hour boulder hop down a creek followed by a bushwack back to the road, but it was beautiful, pouring rain, and with great people, so a good time was still had by all. And really it’s not a true BC adventure unless you have to do some off-trail mishing. 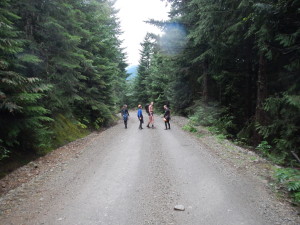 We found Maisal Creek on the way back to the truck

The five of us rolled back and struck camp, then headed to Mission for some much needed Red Robin burgers and bottomless fries. Most of us had pants, so I don’t think we stood out too much.

Overall, it was a super weekend, and canyoning is awesome! Artem did a great job organizing and introducing us all to the sport, and I think a lot of us will head out and do this on our own again sometime now that we know the basics.

Also thanks Phil and Jens for taking all the awesome photos!

2 Responses to Cousin of Canyon