Todd and I were thinking about climbing Mt. Stuart that weekend, but when we saw on the message board that some people were heading to the Mt. Rexford area, we decided to join them instead. It was a good decision: great times with awesome climbing, good rock, nice company, excellent weather and plenty of mosquitoes smooshed. 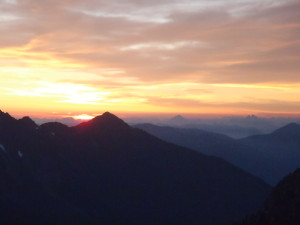 Sunset from our camping boulder

We started on Saturday morning at 6 am with my 89 Honda Civic (Goldie) and Ian’s Truck (Gertrude). Goldie could not cross the water bars on Nesakwatch FSR, but Gertrude gladly shuttled us up all the way to the Mt. Rexford trailhead, and even further. Having hiked that road a year before to climb the NE Buttress of Slesse, I knew how painful it could be and we were happy not to be on foot this time. We left the car around 11 am and hiked up the unrelentingly steep trail, soon crossing a boulder field, and reaching the flat camping boulder 3-4 hours later. The views from here were spectacular. Todd and I kept looking towards Mt. Slesse hoping to see the pocket glacier slide, but it did not happen (it apparently let loose the following weekend). The massive camping boulder would likely fit 25 VOCers, but there was also plenty of tent sites nearby. We were all pretty tired from the hike in, but as it was only 4PM, Todd and I, and Ted and Ian, went to climb something. Todd and I climbed Nick Matwyuk’s “blue line” (10.b) that leads up to the ridge between the North and South Nesakwatch Spires, as reported in his recanted trip report. Todd linked most of the climbing in one long 50 meter pitch.  I found it very hard, dirty and unpleasant, but Todd enjoyed it and said that I probably need to work on my jamming technique. He could be right. Ted and Ian climbed the Direct West Buttress of the South Spire (5.9) and seemed to move quite slowly, returning to camp just after sunset.  At some point, Ted mumbled something about how climbers like to sand-bag each other and no reason was given for their lack of speed. 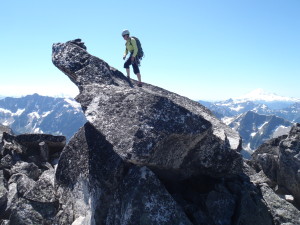 On top of the North Spire 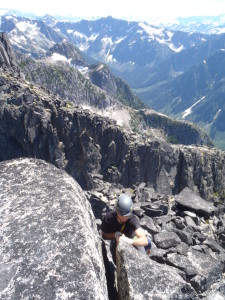 Ted soloing up the summit boulder of the South Spire

The next morning we all got up pretty early, except for Ian and Ted, who woke up after everyone had already gone climbing for the day. Everybody was planning to do an enchainment from North Spire to South Spire and Mt. Rexford. Knut, Erica, Alfred and Tianna headed to the North Ridge of the North Spire (low 5th) and Todd and I went to climb the SW Buttress of the North Spire (5.9). The route was great and the crux pitch had a nice off-width flake, which felt surprisingly easy. On top, we met Erica and Knut who were just having lunch. We soon continued, scrambling along the ridge connecting the two spires, and reached the summit boulder after just one easy pitch. Ted and Ian, with a combination of simul-climbing and soloing, had now caught up and the four of us ascended the summit off-width boulder together. While the guys soloed up the boulder (Ian also soloed down), Todd wedged himself into the off-width at the top and used his body to belay me up. We soon made our way down towards the gully between South Spire and Mt. Rexford. We rapelled Ian’s rope, but it became stuck when we tried to pull it.  Not our problem, haha!  At the col between the South Spire and Rexford, we took some time to look at the route up Mt. Rexford. It looked loose and not very aesthetic and so we decided to finish the enchainment here with just two summits. Erica and Knut took the same decision a bit later, while Ian and Ted continued up Rexford and the loose rock un-roped, and reached camp just an hour later than us. They said it wasn’t as bad as it looked, but those guys are a bit crazy.  Alfred and Tianna had gone up the first Spire and taken the scramble route down between the two Spires. After dinner we all retreated into our tents except for Knut and Erica, who retreated under their tarp (bad idea). The mosquitoes were quite annoying when preparing dinner, but we were able to enjoy sunset in solitude from within our tent mesh. 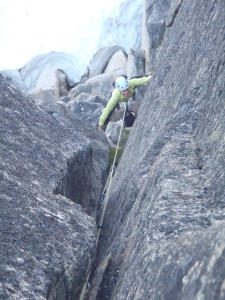 The next morning Todd and I headed towards the Direct West Buttress of the South Spire (the route Ian and Ted had climbed the first day) around 9.30 am.  After we left, Ted and Ian had a good laugh and explained to the others that the second pitch of the route was a long and hard flaring off-width. The route is not at all the grade of 5.9 as reported in the Becky guidebook. Although Todd onsighted this pitch, progress was slow and there was a lot of grunting (he predominantly makes faces while climbing but rarely grunts). It probably didn’t help that he was dragging his pack up below him on a leash. I myself had an even harder time and was only able to climb a small fraction of it and resorted to pulling on the rope for the rest. After I was up, I was overcome with the urge to puke and only started up the next pitch after a good and well earned 20 minute break. Todd likened the off-width to an easier version of Pipeline, which he climbed a few weeks prior, and required a wide variety of wide crack technique, including heel-toe jams, chicken wings and arm-bars. The rest of the climb was stellar, although I dropped my camera on the 5th pitch and could not find it on the way down. I was quite sad because of all the nice pictures I took (which I cannot post here now). We made it back to camp at around 3 pm and packed up quickly. Everybody except Ted and Ian had left already. While Alfred and Tianna simply slept in, Knut had problems with his back, so none of them climbed that day. Ted and Ian came back from Dairyland (11a) when we were about to leave at 4 pm. They caught up/overtook us on the way down only an hour later. We were all glad to see Gertrude waiting to shuttle us down the unpleasant dirt road in just 15 min.

It was a very nice long weekend with excellent alpine climbing on good rock and a superb camp atop of a large flat boulder with all the routes in full view above us. I just wish I did not drop my camera…