With the August long weekend approaching and some high pressure stalled off the coast, it was an excellent opportunity to venture up to the Harrison Hut for my first time. As a new VOCer who had really enjoyed their first few outings with the group, I felt like it was time to help out on a workhike. You can only hike so many kilometres until you start wondering how a trail comes to be…

At the pre-trip meeting, Clemens discussed doing a bit of maintenance on the upper sections of the trail. We decided to camp at the hut, so we didn’t have to carry tents. Luckily for us, most of the tools were already on the trail. By the end of the week, a solid team of 5 eager VOCers was formed – Rueben, Nicole, Frank, Clemens, and I would be making the trip.

Setting out early on Saturday, we were fully-packed and northbound by 6:30am. It was a tranquil drive. As we cruised through the Pemberton Meadows, the morning sun peaked over the Lillooet Ranges, hinting at the heat we’d be feeling later on. We continued onto the logging road, whose condition deteriorated with every passing kilometre. Although our 4WD sedan valiantly took us up some steep sections, it soon became evident that it would not have the required clearance to make it all the way to the 4WD lot at the trailhead. As we prepared our packs at the 2WD lot, I found myself tallying the additional elevation and distance required to make it to the hut. I must have left that thought at the car though, because the math mattered less and less as we rose higher above the Lillooet River. What a beautiful view.

The shade of the coniferous canopy provided a comforting relief as we progressed into the valley of Meager Creek. Suddenly, I noticed a clearing ahead – it was the landslide lookout. After catching my breath, I nearly lost it again gazing at the massive slope failure of Mount Meager. Registering the scale of the event, which only happened 4 years ago, took more than just a few seconds. The debris flow was so powerful that it extended up the opposing valley wall after cascading into Meager Creek, and even surged upstream for several kilometres. I’d later learn that the Meager slide was in fact one of the largest (by estimated debris volume) in Canadian recorded history. Of course, landslides are no new phenomenon in the Pacific Ranges, or any mountainous environment, for that matter.  Nevertheless, the grand time scale of geology is supremely humbling and awe-inspiring when experienced first-hand. A mountaineer’s sense of insignificance amongst the mountains undoubtedly fuels their obsession with the outdoors. 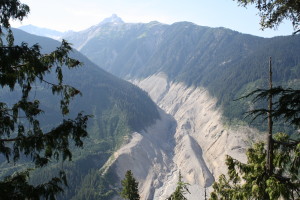 Mount Meager landslide which occurred in 2010 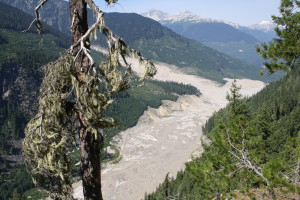 Photo from the up-valley direction

We lumbered on up to the Harrison Hut. Darkness began to envelop the canopy after we passed Barr Creek. We were all feeling the fatigue as we neared the tree line. The bright quarter moon hovered over the southwest horizon, providing plenty of light, so our headlamps remained packed. Crossing over the final creek along the large boulders, we revelled in the completion of our hike. Surprisingly, the hut was occupied with a number of other guests, but as both Clemens and Rueben pointed out, it was great to see the trail getting decent usage.

Quite hungry, we hastily prepared our dinner and eventually stumbled off to bed. Having decided to pack my bivy tent anyway, I was eager to head outside and lay under the stars. I also made the decision to pack my binoculars, DSLR camera, and Gorillapod. Until this moment, I had not felt that decision was justified. But as I snuggled into the slim bivy, opened up the camera shutter, and gazed at the constellations through my binos, it knew it was all worth it. I saw so many shooting stars that I lost count. Maybe it was the onset of the Perseids meteor shower, I thought.  At some point I put the camera away and fell asleep, head and torso sticking out of the tent. But not before I captured these beauties: 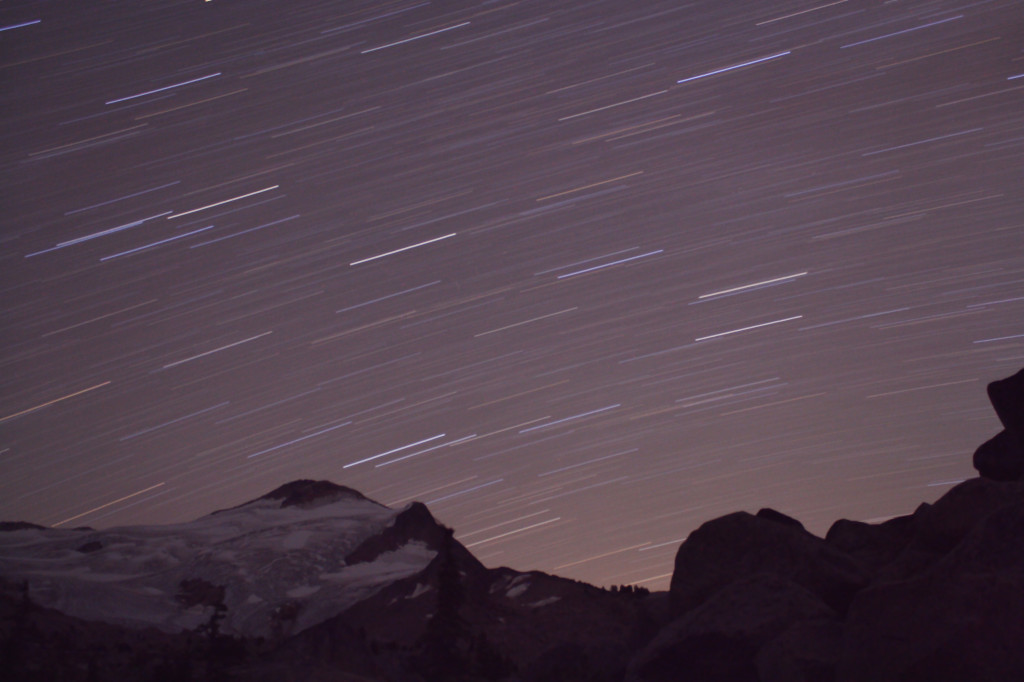 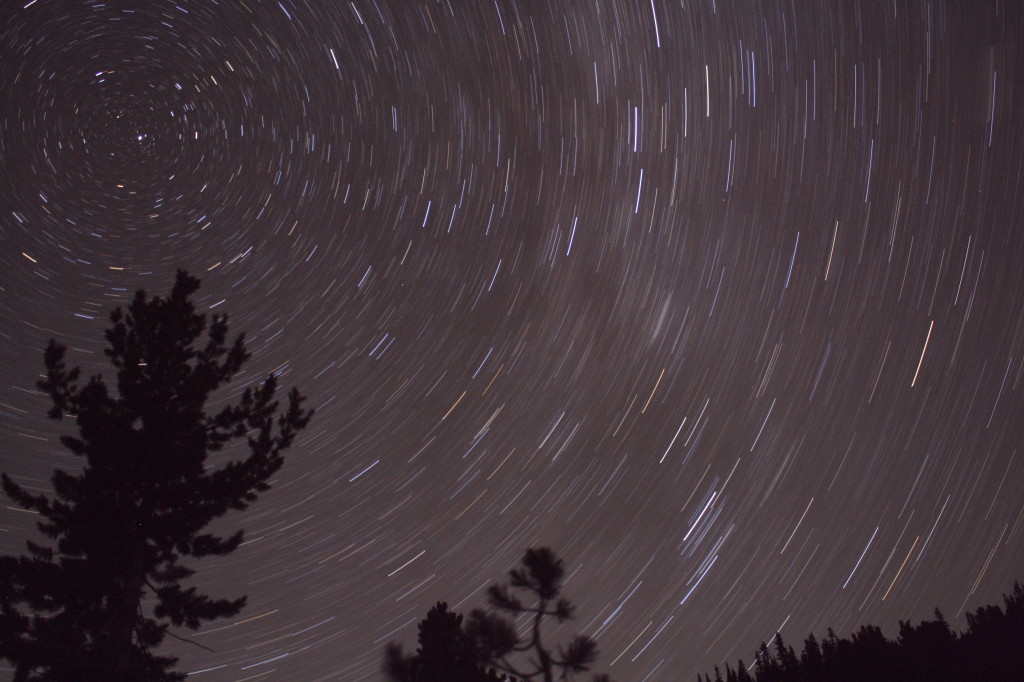 The next morning, we set out through the crisp alpine air. After a bit of prep work for the forthcoming bridge replacement at Barr Creek, Clemens and I continued down the trail, leapfrogging Frank, Rueben, and Nicole who were hard at work designing a new switchback to lessen the grade of a memorably steep trail section. We laboured on, but hours passed surprisingly quickly. As afternoon turned to evening, we set back up the trail towards the hut. Having completed a handful of new switchbacks and countless meters of grade-evening, I developed a new found appreciation for trail work.  Later that evening as we enjoyed our dinner, we were rewarded with a gorgeous sunset. Camera in hand, I joined Nicole and Clemens who were perched on some boulders enjoying the view. 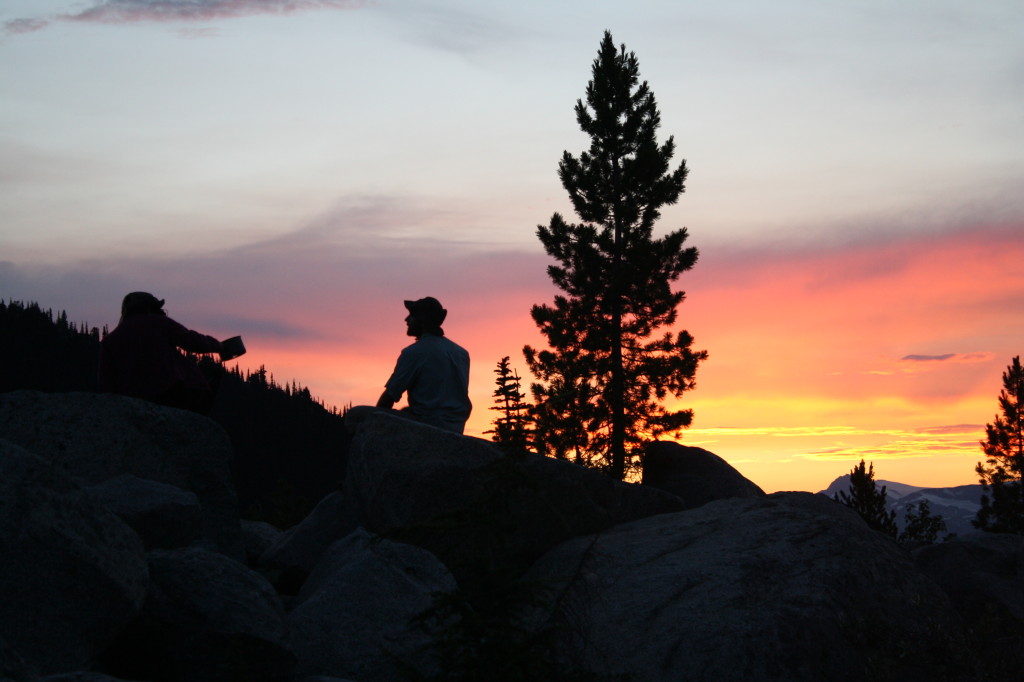 Sunset at the Harrison Hut. Nicole and Clemens in the foreground.

Waking up the following morning, I took a few extra minutes to enjoy the sight of the glaciers extending out from the Pemberton Icefield. We’d work a few more hours on the trail east of Hot Springs Creek before having lunch and continuing on our return trip. As we sat amongst the pines eating our lunch and involuntarily swatting at flies, we jokingly discussed the inherent value of each trail tool. We quickly came to an agreement on the criteria necessary to evaluate each tool; it was the “versatility to weight ratio”. The mattock, although an effective workhorse, was just too heavy, to the dismay of Frank’s back (he nobly carried that thing the entire time!). The bent shovel, in contrast, could do just about any job on the trail, and was always in demand. The jury was definitely in. Bent shovel for the win. 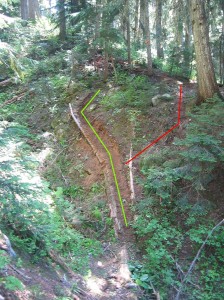 A few of the switchbacks completed. Photos by Frank Zimmerman. 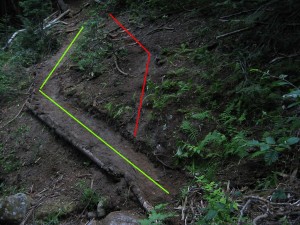 After passing through the intensely hot clear-cuts, we continued on towards the trailhead, and descended the logging road switchbacks to the 2WD lot. Luckily, by that point, the sun had passed below the ridgelines of the valley, and the temperature was quite manageable. Frank and Clemens sat waiting by the car as I rounded the last bend, both looking exhausted but content. Shortly thereafter, we packed up the car and headed back to the city. 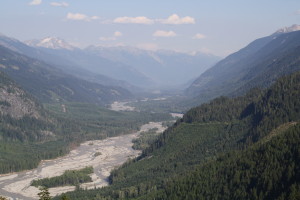 Descent to the Lillooet River 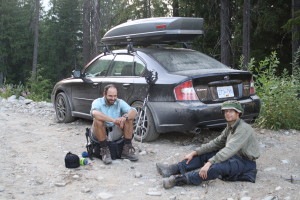 At last at the car!

On the late drive home, I continued to think about that epic landslide, as well as the new trail initiative spearheaded by the VOC in 2012 to regain access to the Harrison Hut. Events like the Meager slide happen all the time, and yet many of us experience disbelief at the scale of their destruction. For as long as we wander the alpine environment, those types of hazards will threaten us. The commitment to making the outdoors more accessible is a respectable one, but it’s certainly a good habit to remain aware of the fact that with sufficient time, the forces of nature always prevail.

That being said – when the VOC calls for help on a workhike, be ready to jump in. And don’t forget a bent shovel.