Posted on November 27, 2014 by Rachael Bashford

Last weekend seemed liked the ideal time for a short escape from the city, just enough time to forget about the impending doom of finals. So a group of 10 of us, new and experienced VOCers alike set off on a day hike, leaving from downtown in the (relatively) early hours of Sunday morning. We made it to North Van on transit hoping the rain would stop (it didn’t) and walked the fairly short distance from Lynn Valley Road to the trail (proving you don’t need your own vehicle to get to the great outdoors!). We set off as it was getting light and headed up to Lynn Peak. There had been a lot of rain the night before so we spent the morning pretty much hiking up a river in the rain so staying dry wasn’t really an option! We kept up a good pace to keep us warm which definitely worked and I even almost stopped noticing the rain. When we reached the top we were rewarded with a flurry of snow to give us a break from the rain – the first snow I’ve seen this year at least! The view from Lynn Peak lasted all of 30 seconds as the clouds momentarily cleared for us as we all made it, so we could see how far we’d climbed. Then finally the sun appeared as we began our descent! 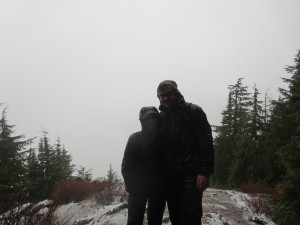 The snowy summit of Lynn Peak

We stopped for lunch at the bottom and feeling slightly damp set off on the Baden Powell Trail in the sunshine. This was a really lovely walk through the trees, made even better as the rain held off for the rest of the day. We stopped off at Lynn Valley Suspension Bridge which spans the really pretty Lynn Canyon with all the water from the night before flowing beneath our feet. After a fairly in depth debate about where to find the best coffee on campus, we decided we’d better crack on if we were to make it to Deep Cove by dark. So we continued to follow the trail into the forest, completely leaving the city behind for the afternoon. We arrived at a viewpoint over Deep Cove just as the sun was beginning to set and paused to take in the beautiful scenery and wish we lived in the little houses on the bay. Being new to Vancouver, I still haven’t gotten used to living in such a beautiful area. From here it was a short descent to our final destination where we picked up the bus from Deep Cove back into the city as it was getting dark, fully making the most of our day. 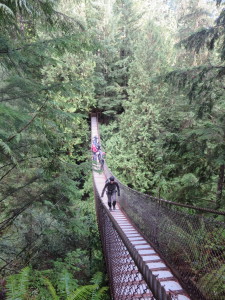 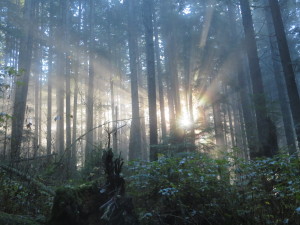 Sunshine on the Baden Powell Trail 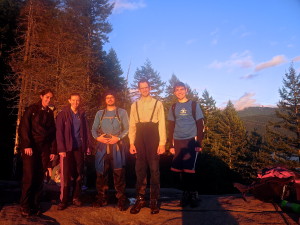 At Deep Cove Viewpoint – almost there! 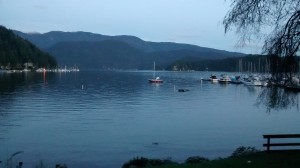 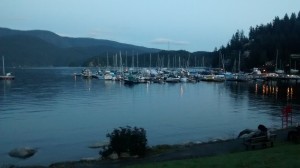