For some reason I had decided that it was a good idea to combine my first snow camping trip in Canada with my first time ever on telemark skis. Was it? Maybe not, but then again trips tend to be fun when you don’t really know what you’re doing. It was a beautiful February morning and the sun was just about to rise as we left Vancouver and headed up north, towards Chilliwack where we were going to do an over-night telemark trip to Flora Peak. After a stop at Tim Hortons in Chilliwack we arrived to the parking lot below the mountain, where we met the rest of our group. We started our climb up, with big backpacks full of equipment (a lot of which I had no idea how to use!) and with skis attatched (in my case, very badly) to our backpacks. As the sun was shining and there was no snow to be seen, it might have looked a bit overly-optimistic to bring skis, but we were excited about getting to try them out closer to the summit. Me and three other people had to stop for a minute to reattach a ski that was about to fall off, and that was all it took for us to lose the group, less than 200 meters into the hike. Without a group to follow, we took a wrong turn right away. It took a while for us to realize that we were lost; we kept on walking thinking the rest of the group were infront of us and were amazed how everyone we met made a surprised comment on the skis we were carrying. Hadn’t they just seen a group before us with skis as well? After the 4th person we met asked us if we really knew where we were heading, we realized that we were probably not on the right way. We headed back, found the right route and eventually caught up with the rest of the group who had been waiting for us for quite some time further up the mountain. 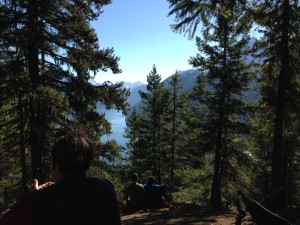 The hike up was a bit challenging but not too bad as we stopped several times. Any time we saw a view through the trees it was so beautiful (as always in this country). After several hours we finally reached the snow, and put on our telemarks. Walking up with the skis and skins were much easier than I had expected, and I was relieved, thinking that I had worried about my non-existing telemark skills for no reason at all. Little did I think about that the hard part of telemarking probably not is walking upwards but to ski downhill, but I was well to find out the day after.

We finally reached the place here we were going to set up our tents, a beautiful place just below Flora peak. The sun was about to set, and we got to watch the sunset from a cliff on the mountain. It was breathtakingly beautiful being surrounded by miles and miles of mountains, and seeing the sun set behind them. Soon the sky got dark and we got to see a beautiful sky full of stars above us. We made some dinner, had mulled wine under the stars and it was really the perfect way to spend a Saturday night. Everyone was pretty tired, so most of us went to bed quite early after that, though some guys decided to spend the night outside under the stars.

The night was really cold, so it was very nice when the morning arrived and we got to get up. It was a clear and sunny morning, and we made some oatmeal for breakfast. After breakfast we decided to climb the summit. Everyone headed up at their own pace, and I had two guys before me. I soon lost the guys in front of me out of sight and the group was a bit scattered. Though I’ve done a fair bit of free climbing the first part was a bit hard, especially as we were wearing ski boots. Being very focused on the climbing, it was only when I was past the climbing part and had reached the snow area that I realized that everyone behind me had turned around. The summit was really close and the final way there just a walk in the snow so I walked the final way up to it where the other guys were waiting. It was a beautiful summit and the view was really nice. The climb down was a bit harder than I expected, but we all managed to get down fine eventually. In retrospect we probably should not have climbed that summit without proper climbing gear, and that’s definitely something I’ll think about the next time I’m out on an adventure like this.

After our little summit (mis)adventure we headed down. The ray of confidence in telemarking I had gained the previous day was blown away within seconds of skiing downhill; for a while it felt like I fell more than I stood up. Some of the people in the group were really good, but the rest of us plowed (at best) or tumbled (at worst) down the mountain. It was definitely an adventure and it was fun, but it was still quite nice to reach the snow line and start hiking again. It felt like the final hike down went really fast, and apart from some of us in the group getting lost (again) it went by really well. The weather was nice and we stopped for a few places to have what was left of our food and to enjoy the view. Eventually got down to the parking lot and headed back to Vancouver, tired and happy after a very intensive, fun, cold and adventurous journey! 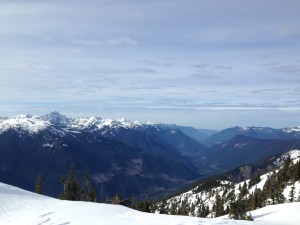 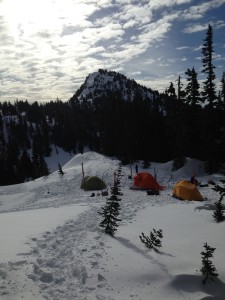 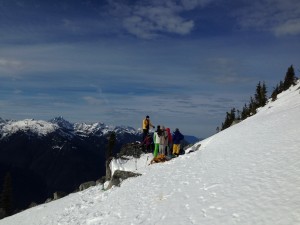 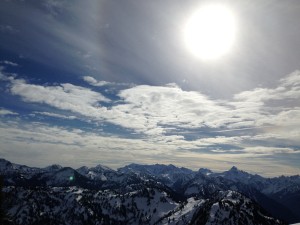