The last time I was up at Harrison Hut the back fell off of the stove. For a couple days it had been puffing smoke out of where you’d think smoke wasn’t supposed to come from, much to Roland’s misgivings, and on our second last day there it finally ruptured.

Caitlin Schneider, Roland and I were discussing the options for replacement and there was talk of using a helicopter to convert money into noise. Because I’m dumb I claimed that if Caitlin were to authorize the purchase of a light wood stove I’d take it up to the hut. To make my posturing sound more realistic I found a Canadian internet sales site that sold the Lil’ Sweetie Boxwood Stove, which alleged to be 95 lbs. It was even in stock. There were some emails back and fourth and then a long pause where Caitlin dilly-dallied until they sold out and then gave me the go ahead to get it.

If I’d been thinking I would have just washed my hands of it and said that it’d sold out but that I totally could have carried it up if she’d responded earlier. Instead I found it on eBay, from some dude who didn’t ship to Canada, so I sent it to Point Roberts.

For those of you not familiar with Point Roberts, it’s this oddly situated piece of the United States, just below Tswassen. It’s connected to the Canadian mainland, but there’s water between it and the rest of the US. The whole Point Robert’s economy consists of selling cheap American gas to Canadians, boat storage for people who can’t afford Vancouver docking fees and parcel pick-up service. If you want something from the States that either won’t ship to Canada or where the delivery service would charge an awful rate for brokerage you can send it to any number of firms in Point Roberts where you’re charged a small amount to collect your parcel.

Anyways, Devlin and I went to McFrugal’s and and picked up the stove. The lady there was having difficulty retrieving the box from the back room so I offered to grab it. She seemed altogether too impressed when I put it up on the counter when I was checking out so I made a point of not mentioning that I’d tricked myself into taking it for a long walk. 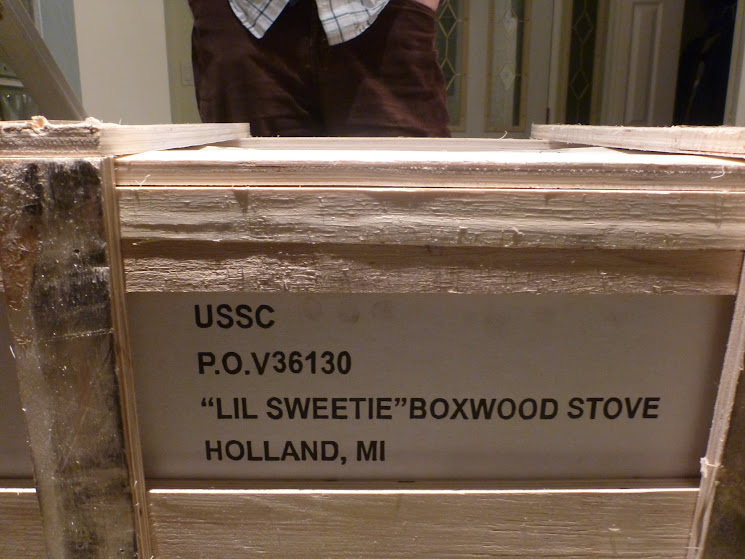 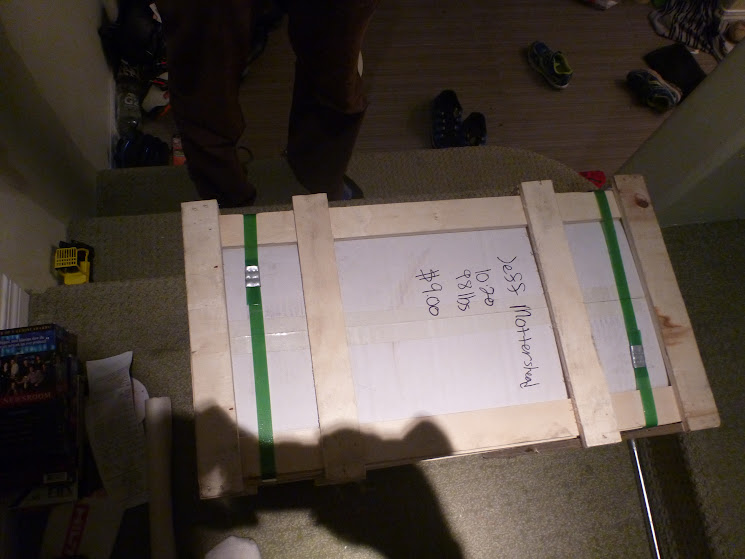 Caitlin had been making some noise about going with me but decided that she wanted to stay until Monday, which I couldn’t do. She eventually decided that she was going to do Overseer with Julien Renard, as long as it didn’t look like 10 m of rain would threaten the bridge at South Creek. I replied that you wouldn’t want to be anywhere around South Creek if 10 m of rain came down so she bailed. After I pointed out that she probably meant 10 mm and that likely wouldn’t be a problem she changed her mind again. We agreed that I wanted lots of time to hike and that she wanted to sleep in so that instead of meeting at the trailhead they’d just catch up to me en route.

I got to the PetroCan in Pemberton at 5:30. I noticed on one of the magazines for ladies with sub-optimal definitions of self worth there was a headline “Easiest Workout for an Epic Butt.” I was fairly certain that I was going to end up with an epic butt again, but thought that hiking up a wood stove was probably not the easiest way to get one. The easiest way to give your butt an epic is definitely taking a good fall on it; that can happen without even trying. I guess that’s not really a workout, though.

The logs in the clearcut were a festival of frost. Even with the expanded steel grips installed it was still fairly disturbing. The last time I fell in the clearcut I filled my hands with thorns and the time before that I tomahawked into a stump. Doing either of those things in concert with a wood stove seemed unwise.

Just after the first clearcut I met this dude coming from the hot springs. He asked me if I was going to the hot springs or the hut, and when I said the hut he said “We were at the hot springs. Good luck.” I found the use of “We” peculiar as he was clearly the only one with him.

Julien and Caitlin caught up with me between Pika and Barr Creek. They told me that they had met a dude coming from the hot springs who was going to get a helicopter because his friend has having heart problems at the hot springs. He didn’t seem like he was in a hurry at all. It turned out to be the same “We” dude that I’d met. He certainly didn’t seem like he was giving it when I met him. If he’d told me what the deal was I would have just dropped my pack like it was a hot potato and ran like goats on fire back to the cars and driven as fast as I could without ending up in the Hazzard County Carwash until I got within cell range. I would have also given the dude my SPOT. But that’s not what happened because he didn’t tell me anything. I really hope his friend isn’t dead.

Julien offered to take some of my stuff. I declined because I wouldn’t be able to convince myself that it counted if I didn’t take all of the stove parts and tools. Julien interpreted this as me wanting bragging rights, but I think that if I had hiked the stove body up and he took the feet and then I later claimed to have taken the stove up he wouldn’t have called hogwash on me, so it’s not really about external bragging rights. Deep down I’d know that I was a failure, though.

Caitlin hung out with me from Barr Creek to the hut while Julien went ahead to scope out the route they’d take the next morning. We talked about how MEC was getting lamer and that they didn’t know how to make pants that fit her long legs or my fat ass. I tried to sell her on the idea of writing to them complaining that they were discriminating our epic butts but she didn’t seem inspired.

Total time from car to hut was 9:50, which could have been worse, I guess. 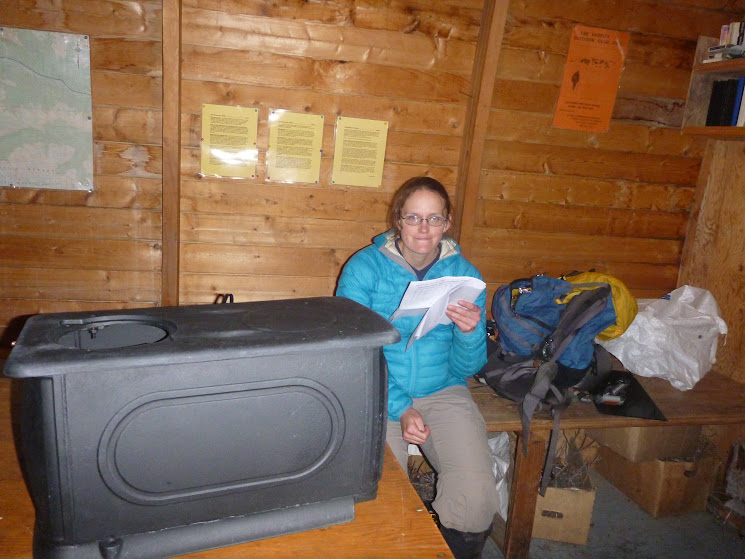 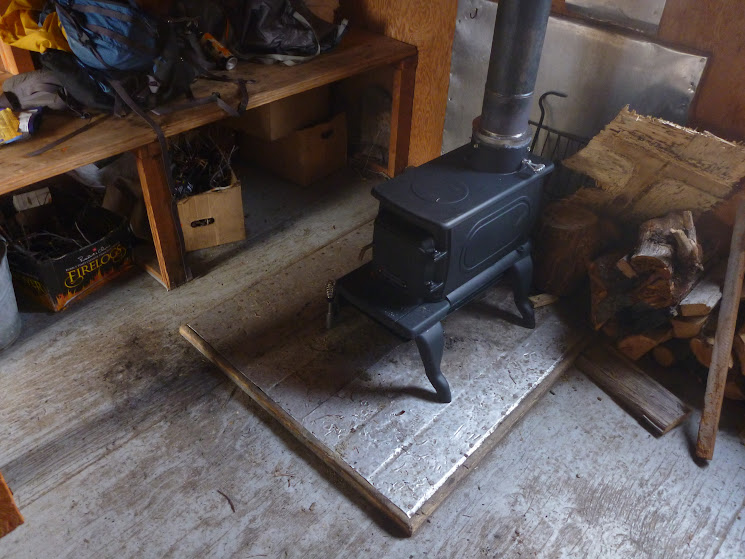 Installed with lots of furnace cement

Sunday morning Caitlin and Julien took off to do Frosty as the weather was determined to be not conducive to Overseer. I did a short burn in the stove to start the high-temperature paint curing process and to make the furnace cement harden.

I’d taken some tear resistant construction garbage bags and some thick plastic garbage bags as well. I had these glorious visions of taking the Luggable Loo out with me, but I hadn’t been flapping my gums about it because I was worried that I’d lose my nerve. 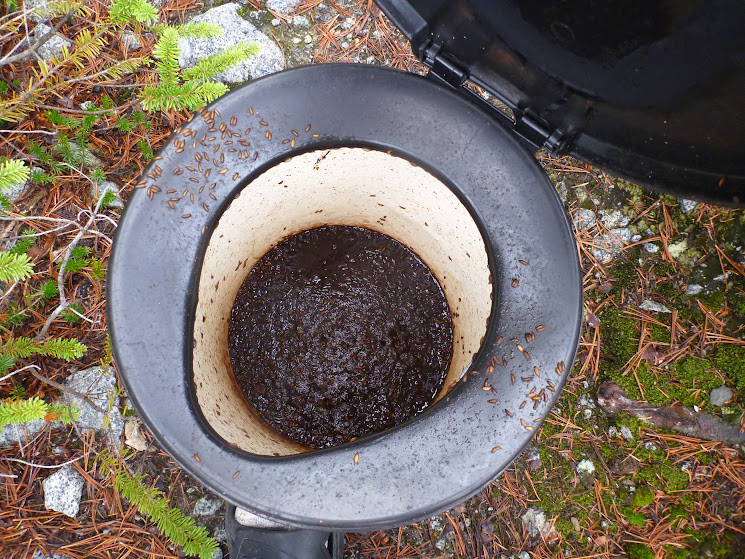 The Luggable Loo sure is disgusting 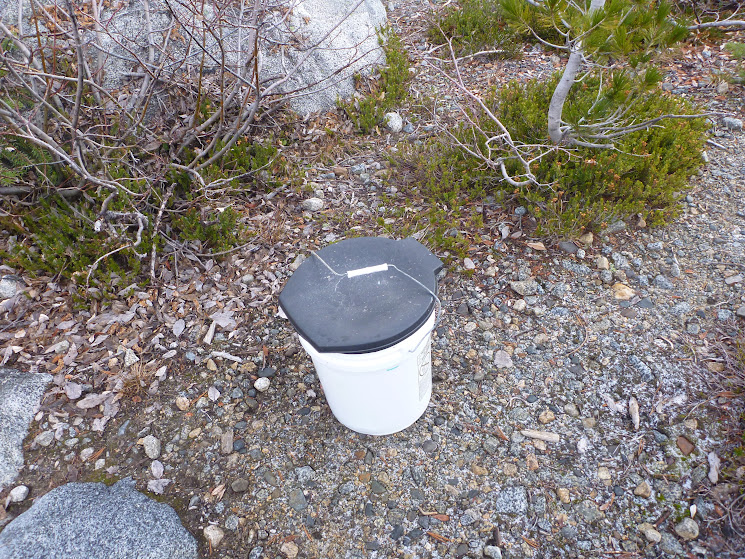 The handle bent to keep the lid on 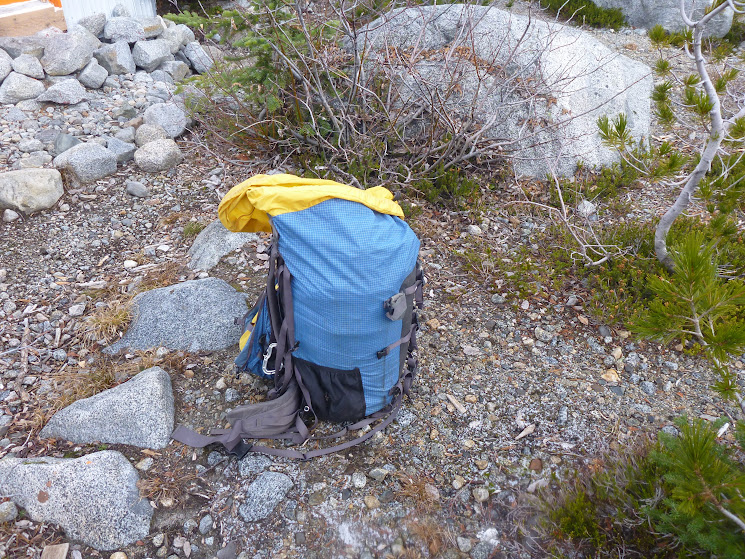 Quadruple bagged and jammed in the pack 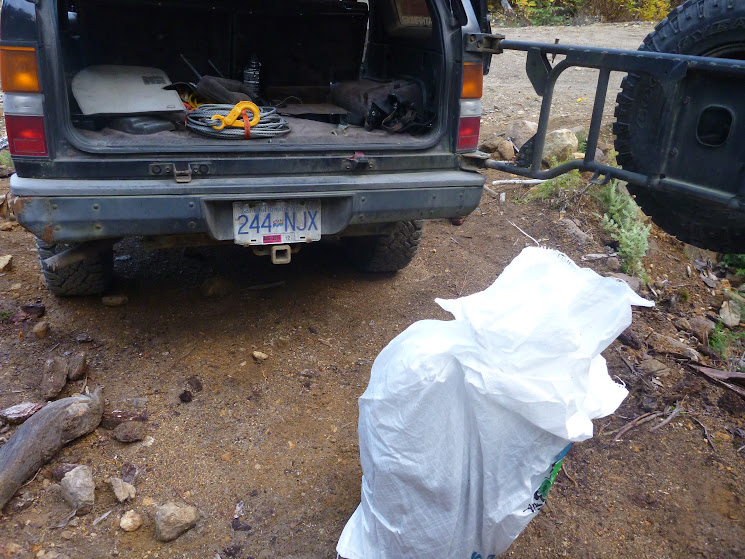 Really I didn’t have much of a choice if I wasn’t going to be a hypocrite after my claims that helicopters were for the weak.

I also rescued my Tirfor cable. It had been decided by Christian Veenstra and Ben Singleton-Polster that the best place for it was Voile-strapped to some random tree near the hut as opposed to just being with the Tirfor. It’s visible in the back of the truck.