First off, I would like to use Midterms as a scapegoat for why this was completed in such an untimely manner.

The trip to Wedgemount Lake was epic to say the least. We began the journey to Garibaldi Park bright and early, an odd bunch of backpacked, ice ax carrying individuals accumulating at 5:30am. We then headed up past Whistler to Garibaldi. For someone not from BC, the drive alone was awe inspiring with views of mountains to summit and islands to explore, and of course my new personal goal to climb, the Chief. The view from the snack stop at Wendy’s alone was pretty spectacular. By 9:30 the backpacks were on and we were ready to climb a mountain, the group–Aleks, Mirko, Vincent, Lucas, Ester, Graham, Harvey, Emily and myself– thoroughly stoked. The first few kilometers revealed great views of Whistler, hidden waterfalls, and also that I maybe could have gone without the added weight of an entire jar of peanut butter in my pack. The hike went by quickly with Harvey DJing and soon we were emerging from the forest, looking down at a weirdly blue lake and up at a spectacular glacier and mountains to scramble.

We refueled, set up our tents in the valley of epicness, grabbed our helmets and headed out for our second conquest of the day, a scramble up Mount Cook. Some background knowledge: all the week before the trip, the forecast had predicted a weekend of lots of unrelenting rain but it had remained dry and clear all day. And as we began to climb Mount Cook even the fog seemed to be lifting with us. Then we got to the gigantic field of loose chalice, and the view of the top faded and the view down the mountain was nothing but white fog and mist. This is where you learn that “beginner friendly” means something very different to VOCers. But it is also where you learn that VOCers enjoy a little bit of suffering and continue to push on. Sadly the turn around time was set for 4:30 and only the false summit could be reached. But then again all you could see was white fog so we really didn’t miss much. We were just all happy to be one a mountain, scrambling around.

The way down was an interesting mixture of sliding, butt scooching, and just letting gravity do the work. As we descended the glacier, and our tents came into view and we were reenergized by the scenery, and the prospect of hot food and dry clothes. Wedgemount lake is equipped with a little cabin where a surprisingly gourmet spread of food was concocted, dining on ricotta and sausage and rice and peanut butter(which by the way was completely worth it). We listened to music, attempted to stretch out our muscles, and made plans for a sunrise hike. By 8:30 the exhaustion set in and we headed to the tents.

The sunrise hike was less than successful considering the alarms were slept through, but the sleep was greatly needed. At 7:30, we headed down to the lake and up to the glacier. The original intention was just to walk to it, but shockingly enough, we were too tempted and had to venture out to a hole in the glacier. We were extremely well equipped, with no crampons, and having forgotten our ice axes. But the stoke was there. We slipped and slided out and it was surreal. Nothing quite as humbling as standing on a gigantic slab of ancient ice. The adventure giddiness set in. It was magnificent, and lead to many more plans to explore glaciers and climb ice waterfalls. But sadly, midterms were calling so we had to head back to camp, pack up, and begin the journey back to reality. Reaching the car was extremely bittersweet because while our knees were happy to no longer be descending, none of us were quite ready to leave. However, the sadness was dulled by the beautiful drive and the $1 Samosas.

Wedgemount Lake was definitely one for the books and I can’t wait to go back for round two. 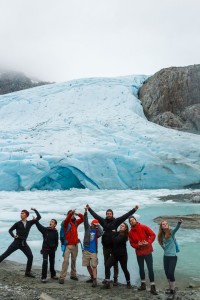