Over the October 17-18th weekend, 8 of us headed up to see BC’s tallest trees in EC Manning Provincial park, which is east of Hope. The larches there turn a beautiful gold in the fall before dropping their needles, and early October is a good time to see them. We were going to see if late mid-late October would still work.

As the trip organizer, I worried, as is my inclination. I worried that the golden larches would no longer be golden. I worried that there would be lots of snow, requiring snow shoes. An email to Manning Park didn’t assuage my fears regarding the snow – apparently there was some, but who knows how much – but it did let me know that at least the larches had been golden the weekend before.

I decided  not to tell participants to bring snowshoes (though I did tell them to bring some to possibly just leave in the cars if they had them).

After some expansion and contraction of the going group (from 7 Wednesday to 8 Thursday, then 9 Friday, then back to 8 Friday night), which caused its own share of worry, were took off Saturday with two cars.

Perrine, her partner JY, and their roommate Vincent picked up Byron before taking off and meeting our carload (Tom, Kevin, Sarah, and Liz) at the Timmy’s in Hope, after a brief and somewhat embarrassing trip for my car through Hope after a wrong turn.

We were blessed with excellent weather on Saturday. We parked at the Similkameen River/Windy Joe/Pacific Crest Trail trailhead and walked a couple km along a trail parallel to the road up to Lightning Lakes. At the lake, a dip was considered but decided against after seeing a number of other people nearby and considering a wet ascent up the trail. We ruefully wished for a lake at the top, when we would be warm and sweaty, but alas there was none.

We then headed steeply up to the Frosty Creek Camp. On the way up, we worried slightly about water availability at camp because of the extremely dry ground, but our fears were alleviated when a down hiker confirmed that there was running water at camp.

Unfortunately, another downhiker informed us that the larches had shed most of their needles already.

We reached camp and half of us decided to sleep in the rustic shelter that was there. We lazed around for some time, as it was only 3pm or so. 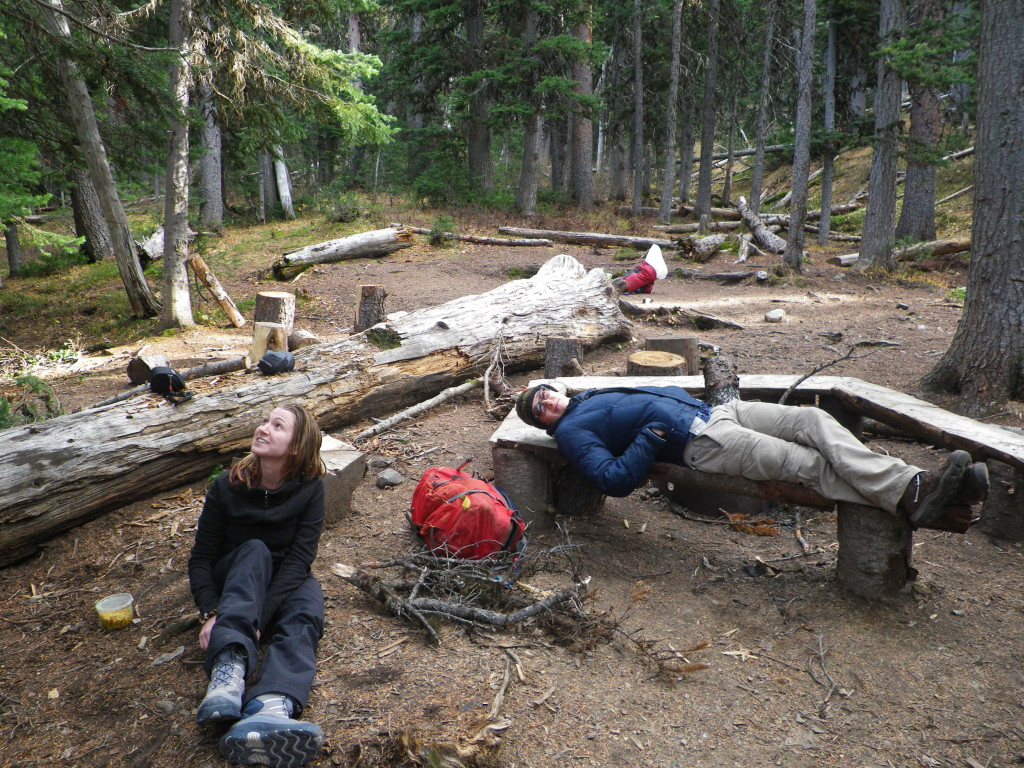 Sarah and Byron, Sarah checking out a whiskey jack

We ran up to the golden larches and saw that most needles were gone. However, they were still beautiful in a gnarly way. On the plus side, there was a golden carpet. 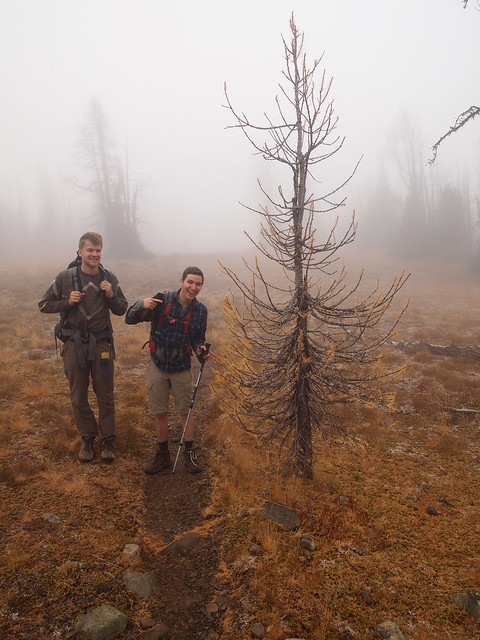 Byron and Vincent with a (partially) golden larch, surrounded by a golden carpet

On Sunday, we headed up through fog toward the summit from camp. Again I worried, this time that we would have no view from the summit, and that we should have gone up the night before. 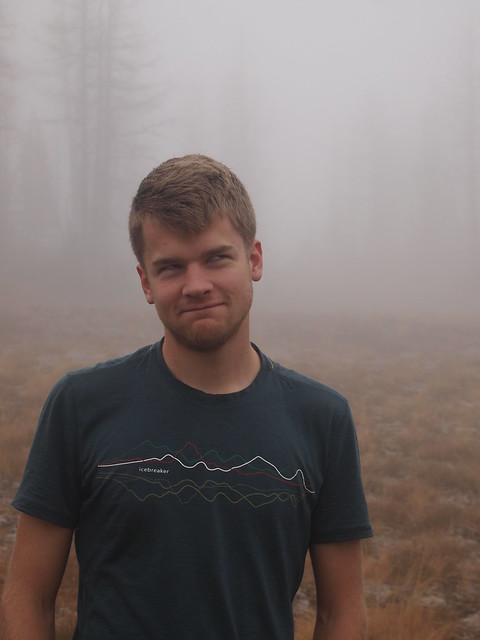 Vincent in the fog

We left our bags at the junction between Frosty Loop trail and the short spur up to the summit, and ascended the easy ridge. 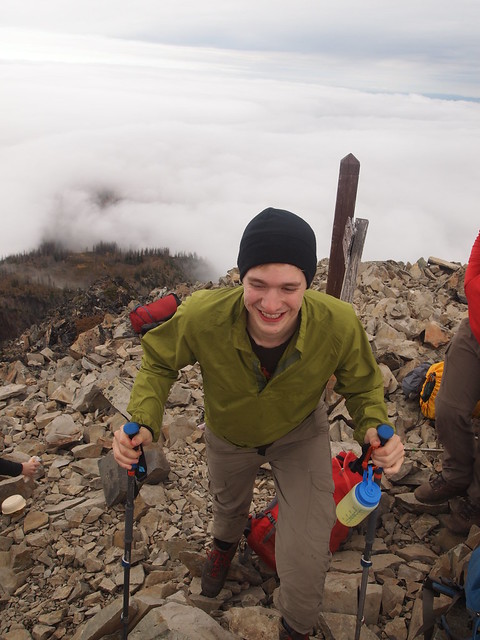 Kevin taking off toward the summit

Despite some suffering from (over?)enthusiastic consumption of alcohol, we all made it up to the lower summit of Mt Frosty, and were treated to views of Hozomeen and other nearby peaks. 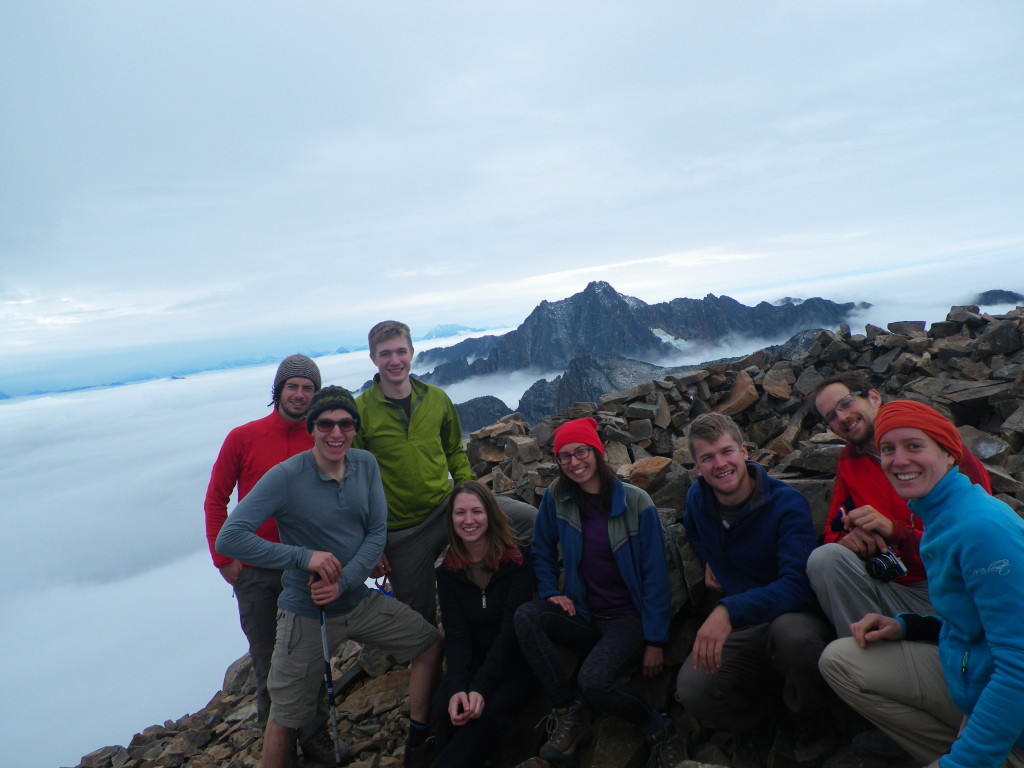 Summit shot, with Mt. Hozomeen in the background 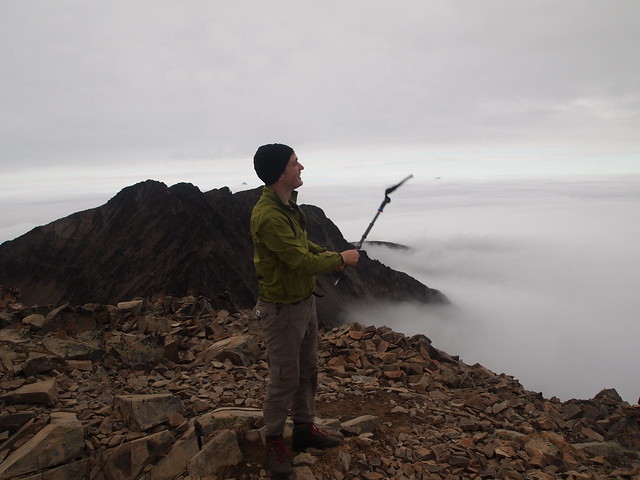 Kevin amusing himself by knocking rocks off the summit.

We made a loop of the trip, coming down from Mt Frosty summit to the Pacific Crest Trail junction and Windy Joe junction before returning to the cars.

The hottest topic of discussion Sunday was whether the annual snowfall and precipitation graph on the Manning Park map had its axes properly labeled – if read one way, it made it look like the average monthly snowfall was over 200 cm, or over 24m of snow per year.

The most exciting part of the trip was likely a game of throwing pinecones into a bowl at one of our numerous stops on our way down. Overall, spreading an 8 hour (27km) hike over two days made for a relaxing weekend.

I was happy to make it to the cars, as I volunteered to carry someone else’s large sleeping bag, which added significant bulk to the top of my bag. 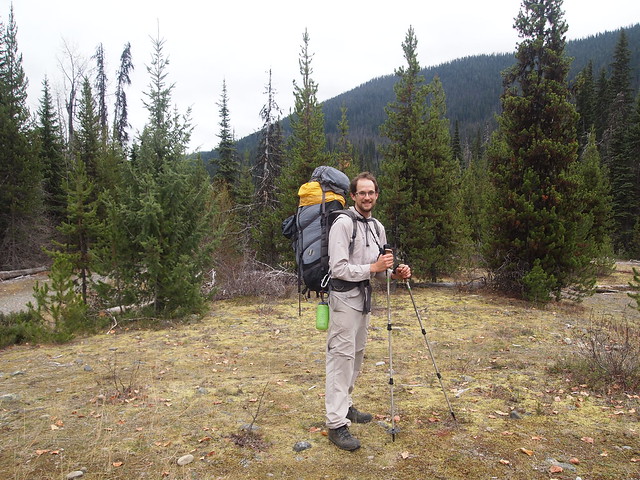 Me (Tom), happy to be back at the cars with a large-ish and not too well packed bag. Good sleeping bags are invaluable!

On the way back to Vancouver, we stopped at the Hope Diner, which had the juiciest chicken breast sandwich I’ve ever had, as well as excellent milk shakes. My worries had been for naught, as a fun trip was had (I hope) by all.