Posted on November 9, 2015 by Elliott Skierszkan

One year ago to this day, Neil Mackenzie, Arran Whiteford and I kicked off our 2014-2015 ski season with some great laps down Diamond Head, behind the Elfin Lakes shelter (see VOCJ 57, p. 79). Well Neil is no longer with us, but that was no reason not to do a repeat in 2015; he would certainly agree to that! Coincidentally enough, this year’s version of the trip had Arran and I accompanied by our good friends Fiona and Bob from Nanaimo, whom were introduced to us by Neil. Completing the crew was Joane Elleouet – whom Arran and I are slowly (and successfully) convincing that winter and skiing are worth spending November weekends hiking up to seek.

We picked up Fi and Bob from the ferry terminal at the relatively gentle starting hour of 8am on Saturday, under pouring rain. They had received lots of odd looks from fellow ferry passengers with their splitboarding and snowshoeing kit! Somehow we managed to get confused in Squamish getting to the trailhead, but eventually we were there, and so was the rain. 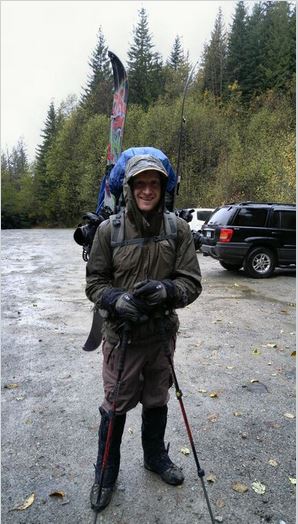 At the trailhead – Optimistic smile despite the rain. Photo F. Elder

Searching for turns early in the season always involves some amount of self-doubt, questioning and wondering what we will find as we start hiking up mountain trails completely devoid of any snow. It typically involves hopeful comments such as “well, if nothing else it will be good training!“. This year’s hopeful snow-seekers started out on the trail under these familiar circumstances, compounded by the warm air temperature and the sopping wet rain.

The little creek that runs along the trail up to Red Heather meadows was a raging waterfall that was quite spectacular to see! Sometime shortly before the Day Use Hut, slush began to appear on the trail and by the time we stopped for lunch by the hut’s wood stove, we were starting to feel optimistic about the sanity of our weekend plans, although the rain had still not relented.

After lunch, we were off to Elfin Lakes and sure enough, a few hundred meters away our backs were finally relieved of our skis as we transitioned into skinning mode, still under the rain, but pretty excited nonetheless. The only mishap here was that Bob forgot his boot liners at home, so he ended up skinning on his splitboard using his leather hikers! A bit uncomfortable, but it got him to the hut. 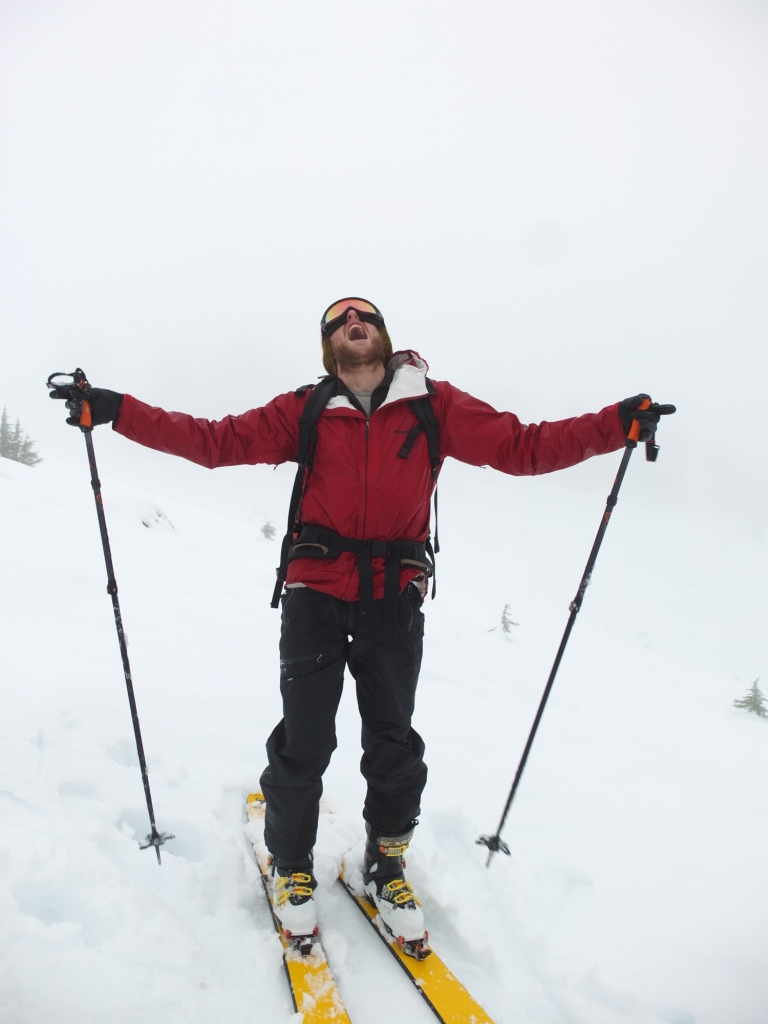 Elfin Lakes is a very popular spot, which is why I tend to prefer to go there during the off-season, for example on a very rainy weekend November after the hiking crowds are gone, and before the skiing and snowshoeing hoards arrive. Somehow, there were still a full 30+ people at the hut despite the weather! Most of the crowd were hikers in running shoes, and I didn’t envy them one bit, hiking up all the way from the parking lot in mostly slush and puddles.

We got up bright and early Sunday morning hoping to get to higher elevations for some turns. Coverage was pretty decent, and Saturday’s rain compacted everything to make a nice crust and prevent us from punching through to all of the menacing rocks under the thin snowpack. After about an hour and a half one the move, we reached the Gargoyles-Columnar Saddle, where Fi and Bob decided to stay back and ski off of Columnar Peak, as Bob had managed to make up for his forgotten boot liners with a variety of extra clothing items stuffed into his splitboard boots, and two pairs of thick socks.

Meanwhile, Joane, Arran and I got ready to ski down to the col leading up to Diamond Head. 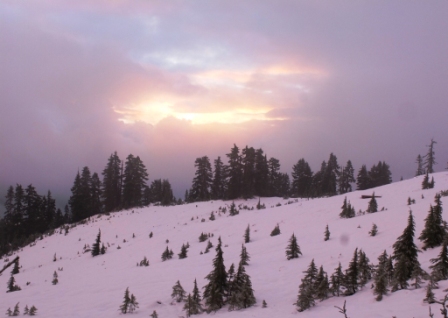 Thick clouds were interspersed with nicer clearings. Skinning up to Diamond Head we enjoyed views on Howe Sound below, but struggled a bit on the icy rime that covered the summit ridge. We didn’t have much time on the summit, but did have a “wee dram” for our pal Neil, whom we credited with giving us good snow coverage and a break in the clouds from his viewing point, wherever that may be. 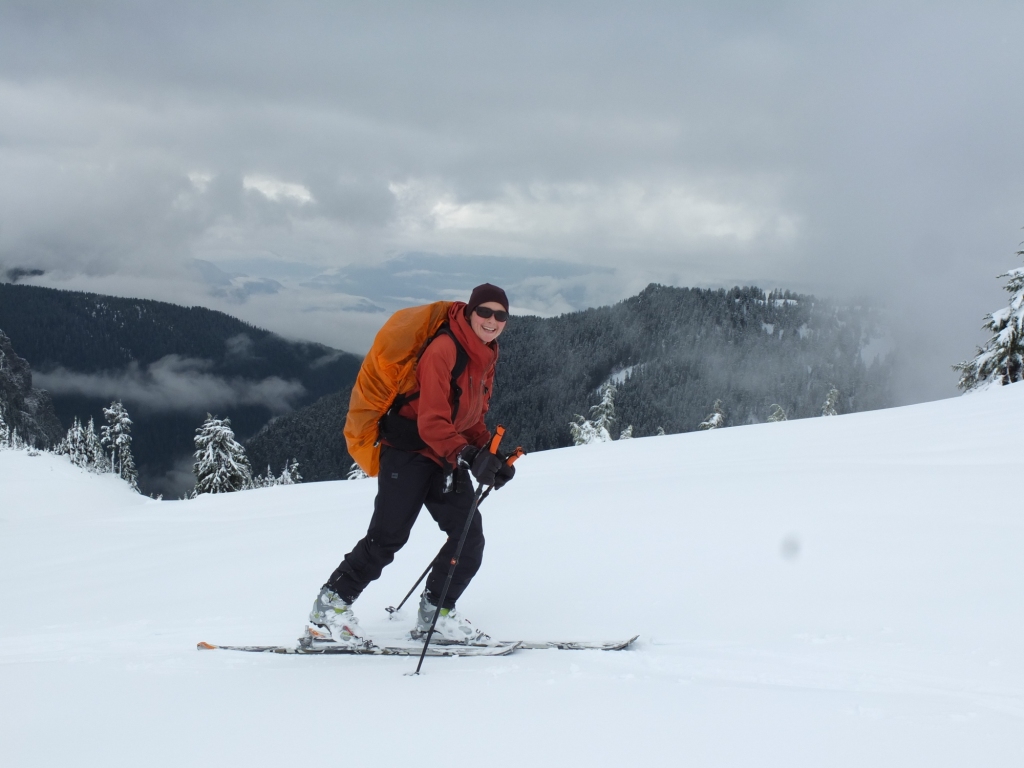 Joane is all smiles. Looks like she is enjoying this ”winter” thing!

Making our way up to Diamond Head

I was expecting a pretty icy ski down, but after transitioning at the summit we ended up finding an absolutely beautiful stash of excellent powder. First turns of the year baby, and boy were they nice! 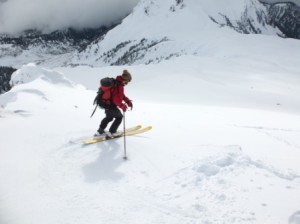 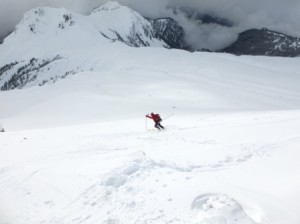 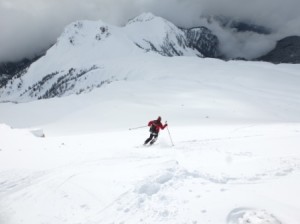 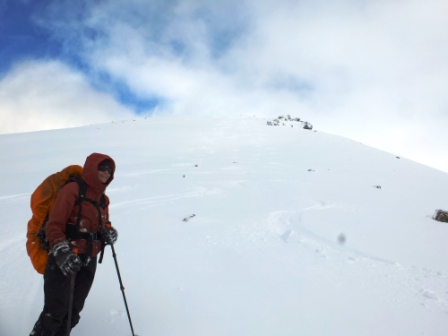 Back at the hut, we were surprised to find a huge group who had hiked in for Sunday Dim Sum brunch. We gathered our things and headed back to the cars after lunch, thankfully, still on skins rather than bootpacking. As we headed out we noted the incredible diversity of activities we noticed people around us doing: some hikers, some snowshoers, some dim-sum brunchers, one trail runner, one skiing party (us) and even someone having a rip on a fatbike! What a mix!

Anyways, for those of you who are mainly reading this because you want to know what the conditions are out there, they’re not bad! Lots of crusty, thinly covered stuff below 1800 m where it rained hard, but above that things are looking pretty good for some early season turns! Have fun out there and be safe!