A newbie’s trip to Brew Hut with some cool people

What: A trip on skis up to the VOC Brew Hut Where: Oops, I guess I kind of already did that one!

How: Well, here’s how it all happened, from the perspective of a brand-new VOC member:

It started with the realization I was slowly going mad from being in the city reading textbooks for too long. Fortunately, I was aware of this thing they call the VOC. A quick check on their website told me there was a ‘beginner-friendly’ trip to the Brian Waddington Hut running in a couple weeks. I was intrigued enough that I showed up the next day at the VOC office with my $40 membership fee.

When I signed up, the trip already had some 35 people signed up ahead of me! However, a bunch of people bailed and an overflow trip was being run, and so bright (or rather dark) and early on a Saturday I managed to find myself taking the last seat in a Modo co-op van heading north.

Of course, having never carried a pack up mountain on telemark skis, I made tons of typical beginner errors, like assuming I could ski with the same pack weight as I can comfortably hike with on flat ground, not bringing enough water and getting so dehydrated I could hardly swallow my lunch, and just not knowing what I was doing in general. Luckily my group was great and didn’t make me feel bad for making them wait when I couldn’t get my equipment to work. I ended up walking uphill a solid section because I could keep up that way better than I could trying to skin up. Still not sure if that was more of an equipment or skill problem… A bit frustrating, though still tons of fun, in a warped sort of way!

We reached Brew Lake just as the sun was starting its daily show of colouring the sky and mountains all sorts of beautiful. We reached the hut with the help of our headlamps, and found it already packed and toasty. Two other groups plus Ricco the Husky Dog were already there (one group had grabbed our packs and driven them up the last section of the service road to the summer parking, so we liked them already  - our van couldn’t get us further than the winter parking lot).

The evening included food, warm drinks (tea and fire whisky), stargazing, watching a near-full moon rise over the mountains, guitar playing and a bit of a sing-along, and trying and failing to find card games whose rules were universally understood.   Despite the fact there were between 15-20 people (plus Ricco) up there, the hut cleared out when people started drifting off to bed – one group had tents and those with warm sleeping bags took advantage of the relatively mild temperature and dreamed directly under the stars. For the rest of us in the loft, we stayed toasty all night, and by the morning the loft was almost cool enough to be considered a reasonable sleeping temperature.

The morning started with a more leisurely viewing of the sun’s dynamic light show across the sky and mountains. The rest of the morning was spent eating, making use of our new friends’ crazy carpets, and doing a few extra runs of skiing (first time trying to telemark for some of us!).

Finally we decided to pack up and head out. The snow was lovely and it was really quite fun to bail (except for the fact it could be a lengthy process to get back on my feet thanks to my pack). At Brew Lake we breaked for lunch and a basic lesson and exercise on avalanche rescue.

The weather was warm (there were some weird warm thermals we got all weekend), and the snow cover was even less than it had been the previous day on the way down. Fear of destroying our skis (and lack of skill for some of us) meant that we walked a good section of the forested downhill part.

Again our destination (this time the car) was reached with the aid of headlamps. We stopped for Mexican food in Squamish at about the busiest time possible, but enjoyed our last bit of time together (until the next time most the group met up later that week for all-you-can eat sushi, yay for cool new friends J)   It was an exhausting experience and my shins were still sore a week after the trip, but I’d do it again in a heartbeat!

And there’s how one VOC member’s first trip happened!

Photos courtesy of Marius and Mirko 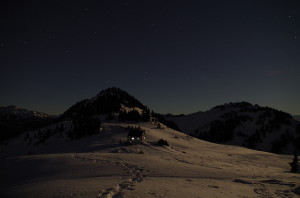 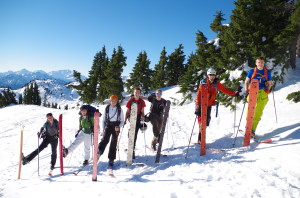 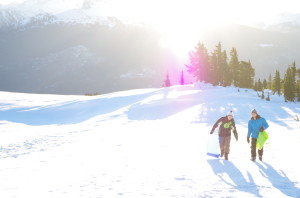 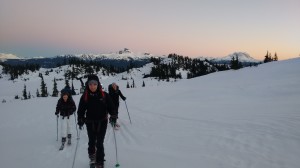