Thanks to the lickety-split actions of a few VOC members, the attempt to burn down the Brian Waddington (aka Phelix) Hut on New Year’s Eve failed, however, the hut needed afterwards a pair of new fire extinguishers. So Tianna, Roland, Vincent and me went up there to deliver the extinguishers along with a “new” Coleman stove and heater.

The four of us left Vancouver on Friday at 4:30ish, stopped in Squamish already to get happy meals at McDonald’s and finally arrived 4 hours later at the trailhead to the Phelix hut, where we car-camped the first night. That was the first of all the new experiences for me, that were to come: camping in the snow, which was surprisingly warm and cozy! I guess, the -12° sleeping bag and wearing all warm skiing clothes was worth it..

The next morning we left early to use most of the daylight on our way up to the hut. It was just cloudy, with a tiny bit of snow in the air and I was really energized after a good nights sleep and a nice breakfast in the snow. The first third of the route Roland was leading us, but then he turned around to stay at the car overnight. From there on, the way-finding skills of the rest of us were tested, which shouldn’t be too hard on a frequently toured and well marked route. However, somehow we managed to slightly get off the path and found ourselves on the wrong side of the valley. In between the actual route and our “newly discovered” route: a clear cut and a creek. Instead of going all the way back and on the other side up again, we decided to ski through the valley. A bumpy ride across this valley through deep snow and dense little trees and later, we finally reached the actual path. 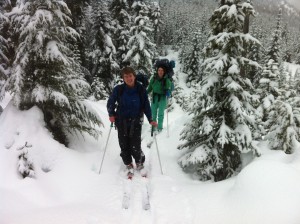 Vincent and Tianna in the clear cut 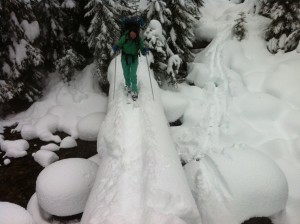 Following this route, the steep section started roughly 2 km further up the valley and I was huffing and puffing on max. power until we reached the lake with the hut on the opposing shore. As we needed quite some time to ascend with our luggage and thanks to our detour, it was already dark when we finally arrived. Luckily a few people were already nesting in the hut, such that it was a bit warmer but also humid. Our night from there on included large amounts of chili (as I planned for 4 but only 2 could eat it in the end.. sorry Roland and Tianna), couscous and brownies, chatting with the folks in the hut and warming up a bit at the newly delivered Coleman heater.

Sunday morning we left the hut right after breakfast to make Roland not wait forever at the trailhead. What I didn’t know at that time yet, was, how awful my skiing skills would be with a backpack on, steep downhill through trees and unfortunately on too large skis. Both, Vincent and Tianna did pretty well skiing down the steep section, I did not. I was half sliding, more falling, partially walking but somehow always descending until we reached again the nicer moderate section of the route, where I actually could stand on skis for a bit more than 20 m. Nevertheless, it still took us 3 hours, in which I got soaked thanks to falling every so often and from quite a bit of snow coming from the sky. I was very, very happy (and I think everyone else as well) when we finally arrived at the car, where Roland was waiting, together with some more dry clothes, the car’s heating system and a cheesecake!

Before the trip I thought of it as a most welcome training for the leg muscles. I didn’t know how steep the steep section on the route to Phelix Hut actually feels with a big backpack on and how exhausting extra-meters can be, when these meters go through really deep snow in a bumpy clear-cut and a creek.. During the trip my attitude towards telemarking went from initial pure joy to abyssal hate and now, while writing this report, I think of the next trip on these wiggly skis and am looking forward to it!