Rising to a modest 1550m, Blanchard is not the tallest of the peaks in the area, but to me it always held significance as the pointy objective in my own backyard. I see it driving back home to PoCo, and often driving to work on a clear day. In my head I think of it as K2 of Coquitlam, even though it’s actually in Maple Ridge.

After harassing most of my friends for months, Marcin, Anne, Iman and myself picked a sunny Saturday in July to get up there. The beta seems to vary from source to source, both written and first-hand. I was told it is a day-hike, and I was also told to take 2 days and bring a 60m rope for 3 pitches. We decided the optimal amount of gear is a light alpine rack and a 30m 8mm rope and hiking boots.

We chose the more common approach route over Allouette mountain over the less used Evans Valley route. Using bikes for a speedy descent on the way back would have been nice, as its largely a road, but at the time I did not have a bike and my car could not carry 4 bikes anyway, so we went strictly on foot.

The hike up to Allouette was a pretty typical walk through the forest uphill, rewarded by a lovely view from the top and many delicious blueberries on the way 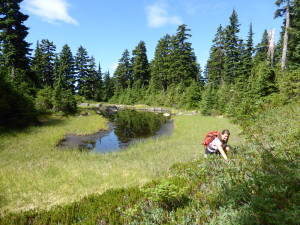 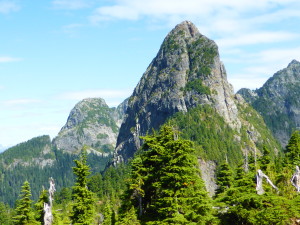 From the top of Allouette, our objective looked imposingly steep and moderately bushy, just as expected. We quickly found a way down from Allouette to the saddle, and after a bit of exploratory bushwaking found a way up to the base of Blanchard.

After some poking around, it was agreed that the most obvious route up was indeed the way to go, confirmed a few minutes later as we saw a couple climbers rapelling down. They have camped on the top of Allouette the night before, and had a 60m rope.

Marcin, aka “Balls of steel” led the way, scrambling up the first section where the rest of us were not comfortable without protection due to exposure . The pitch was actually very straight-forward but the 3 of us were happy for the belay. Next bit was fairly steep and holds were not amazing, but we got past it without an issue. After that it was generally steep-ish fun scrambling on rock of sometimes questionable quality. 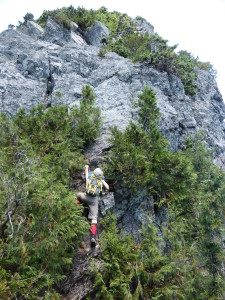 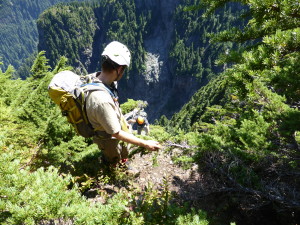 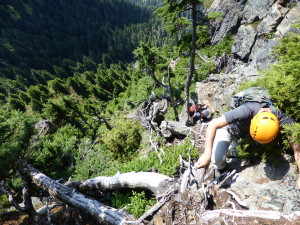 The highlight of the way up for me was when I leaned against the rock and felt a breath of cold air coming out of a crack, like air conditioning on a summer day. Which made wonder how much of the mountain is hollow. We felt the cold breath of the mountain from a few large cracks and continued up. Eventually we reached the false summit on the right(oops), dropped down and traversed to the left and continued up. As the way up near the summit got easier, the rock got even worse, raising the question how this choss pile is still standing at all. 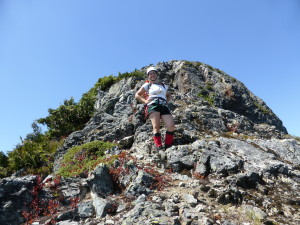 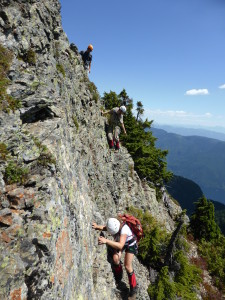 We had lunch at the summit, took in the view of the rest of Golden Ears group, the lower mainland and other mountains in the distance. It was a beautiful day to share with good friends on a peak I’ve wanted to bag for a year or two 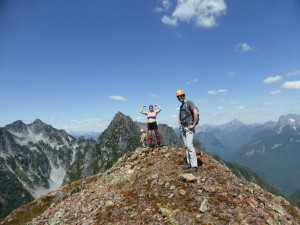 After having lunch we started on the way down. Downscrambling was mostly good fun, except the moment about 2/3rds of the way when a microwave-sized rock that felt solid at first almost tumbled once I put weight on it. Shortly after that we reached the steep section with dubious holds and got down in 2 raps off slung trees/roots. 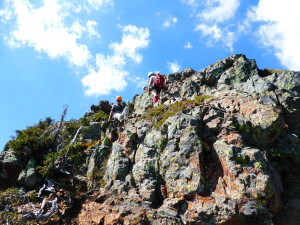 Once back on Allouette, we enjoyed the views once again, and started on the hike down. There was still a surprising amount of delicious blueberries left near the trail and between Anne and myself, we made the best of the opportunity. The hike down felt like it went on forever and we soon wished we brought bikes. In all, it took us 12 hours and we were tired but happy. To finish off the day we went for a swim where Gold Creek enters the lake and it felt fantastic, as did the burger at the Black Sheep pub afterwards. And now every time I see the Golden Ears group, I think of that day and the good times we had getting to the top of the pointy peak on the right.