Posted on February 5, 2016 by Nicholas Gobin
Artem Bylinskii and I had been planning a grand August adventure for some months, but as the departure date drew near it seemed like it wasn’t going to happen. Climbing conditions in the Bugaboos were less than stellar and work & family were pulling me towards a shorter trip anyways. We batted around a couple ideas until Artem struck gold: “We should climb the Judge!”. It was immediately decided; The Judge’s long history of miserable failures somehow made it seem like a grander adventure than anything we had yet considered, even though we planned to do it in only three days. This would be my first attempt, but Artem’s third visit to the mountain. His first two were foiled by an off-route bush-bash and bad avalanche conditions in winter. I secretly wondered if Artem was jinxing the trip and setting himself up for another disappointment by bringing a Judge rookie with him – a reading of the local mountain journals established a reputation that the Judge will not allow his summit to be reached unless the party had failed at least once before. I was not alone in my superstitions as throughout the entire trip we avoided conversations about possible places where things could go wrong even though we were both clearly thinking about them; somehow the mythology of the Judge inspired superstitions even in two engineers.

We made arrangements to depart the day after we decided on the Judge. Artem and I begged bikes and a bike rack from friends, and after work I rushed to Horseshoe Bay to try and borrow a zodiac and a motor. The zodiac mostly floated, but the motor needed a carburator rebuild. Artem thought we might be able to get Piotr’s motor running, so we convened at his house at 9pm on a Monday evening to see if it would start. Some new gas & 2-stroke oil plus a bit of TLC for the pull starter soon had it roaring to life on a sawhorse in his backyard. I’m sure Piotr’s neighbors were as thrilled as we were when we got the 2-stroke engine running through all revs at about 10:30pm. After patching the leaky auto-bailer on the zodiac we now had a setup that would hopefully get us across Stave Lake and back without any paddling! Artem and I departed for Stave Lake that night and slept in the nearby Rolley Lake Park as the gate to the Stave FSR was closed at night to prevent bush parties during fire season. 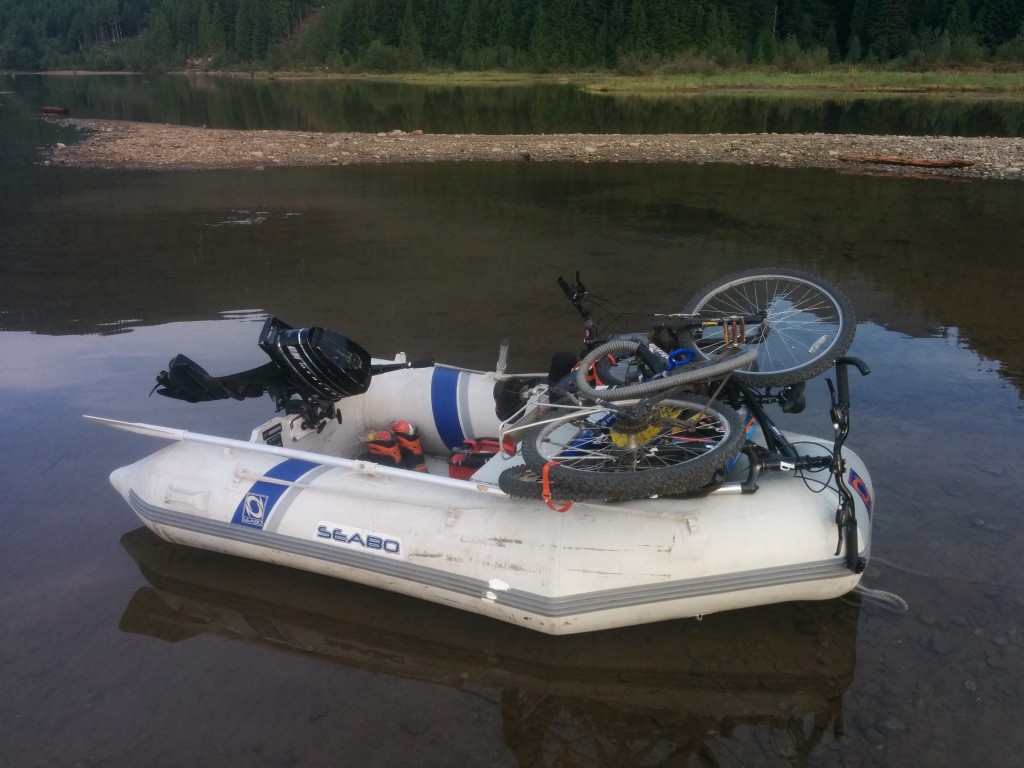 Our steed, fully packed and ready for adventure!
We awoke early and were at the gate exactly in time for its 6:00 am opening. We proceeded to Sayers point where we inflated the zodiac, mounted the motor, packed our gear and voile-strapped bikes on top. By 7:30 we gave the motor a few pulls and it roared to life, so we set off across Stave Lake with our fingers crossed that we wouldn’t be rowing back after an engine malfunction. It took us two hours to cross to the log dump at the NE end of the lake where we unloaded everything and stashed the boat on shore. 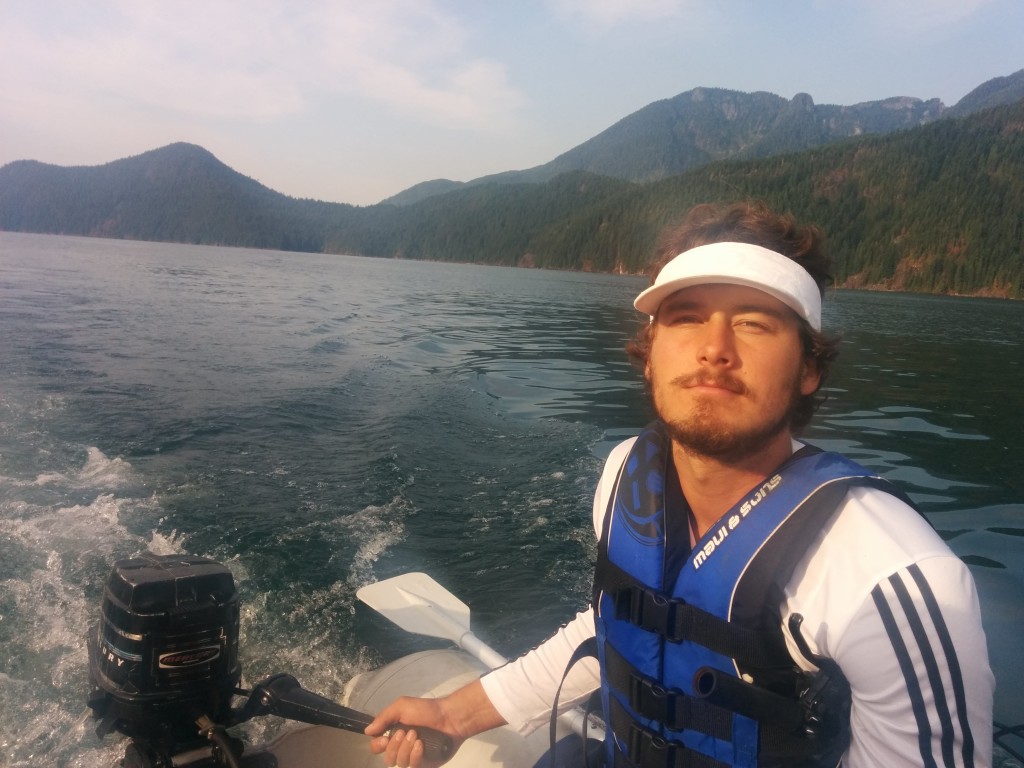 Artem driving across the lake
It took us perhaps an hour to bike up the FSR to exactly kilometer 14. We had brought a second little inflatable raft that was purchased for $20 at Walmart, but the river looked low enough to ford so we left it with the bikes. We crossed about 200 m upstream from the 14 km marker, and the water was thigh deep. This was great news; we had been concerned about water levels since the Stave River gauge athttp://wateroffice.ec.gc.ca/ read 2.5 m before we left. Also, based on past misadventures, Artem would like me to strongly note that we crossed at km 14, not km 15 as referenced in a couple of Fred Touche reports!
We were across the river and the little pool on the far side by 12:30pm and stopped for a bite of lunch. Having been here twice before, Artem was able to lead us right to the start of the faintly flagged trail; we reinforced the flagging at the river crossing so the starting point is more visible, and we reinforced the aging flagging on the way up the trail from here. After our quick lunch, we set off up the trail. A short section of brush near the river gave way to a “trail” that ascends very steeply and efficiently through old-growth forest above; both of us were quite impressed with the route. A little more bushwhacking and vertical bush-climbing was required before we popped out at 2pm directly onto the water platform at ~500 m. After another quick break at this gorgeous spot we ventured into the bush on the far side of the platform. 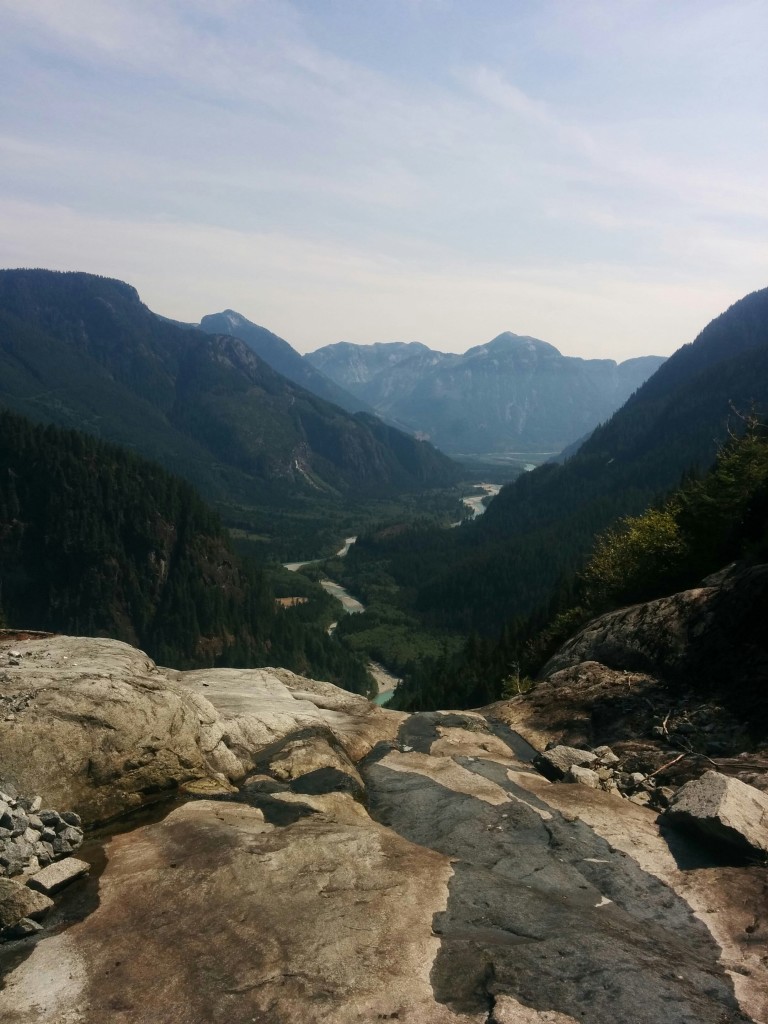 The water platform
This is where I finally felt the full force of the Judge’s bush. Avy debris that resembled a bad clear-cut gave way to a brief respite of old-growth, followed by three successive slide paths of bad alder and devil’s club. While not the worst bush I’ve ever whacked, that can probably only be said because I wasn’t carrying skis. It took us three hours to travel half a kilometer and gain 200 m, finally depositing us in the Hanging Valley at 5:30pm. What a relief to be out on clean slabs with gorgeous waterfalls in every direction and plentiful water sources! We decided to make the most of the light and continued up the slabs on the left side of the valley to ~1100 m where we we camped at 7:30pm because the flat-ish bivy spots were getting increasingly sparse. A blazingly quick dinner in Artem’s MSR Reactor and a gorgeous sunset had me passed out in my sleeping bag before it was fully dark.
We awoke at 5:30 am the next morning but were a little slow getting going, we only left camp at 7:00 am. Nonetheless the meters fell away rapidly and we had fun climbing on rocks through the waterfall in the hourglass couloir at 9:30 am. We put on crampons and deployed our ice axes for two short snow pitches above the couloir and that took us to the col between the main summit and the false north pinnacle. This is where encountered our first puzzling obstacle; how to get off the sharply overhanging moat onto the rock wall when the only place it connected was a blank slab. I belayed Artem as he cautiously crept over the snow to the main crack that lead up the main summit block. He stepped onto the rock uneventfully, and after removing our crampons Artem lead up the low-5th crack with our minimal rock rack (1 set of tricams, 1 set of nuts). After 30 m Artem called that it was getting easier, not harder, so we simulclimbed until it became apparent that we really didn’t need the rope at all. We unroped and quickly ascended the last meters to the summit. 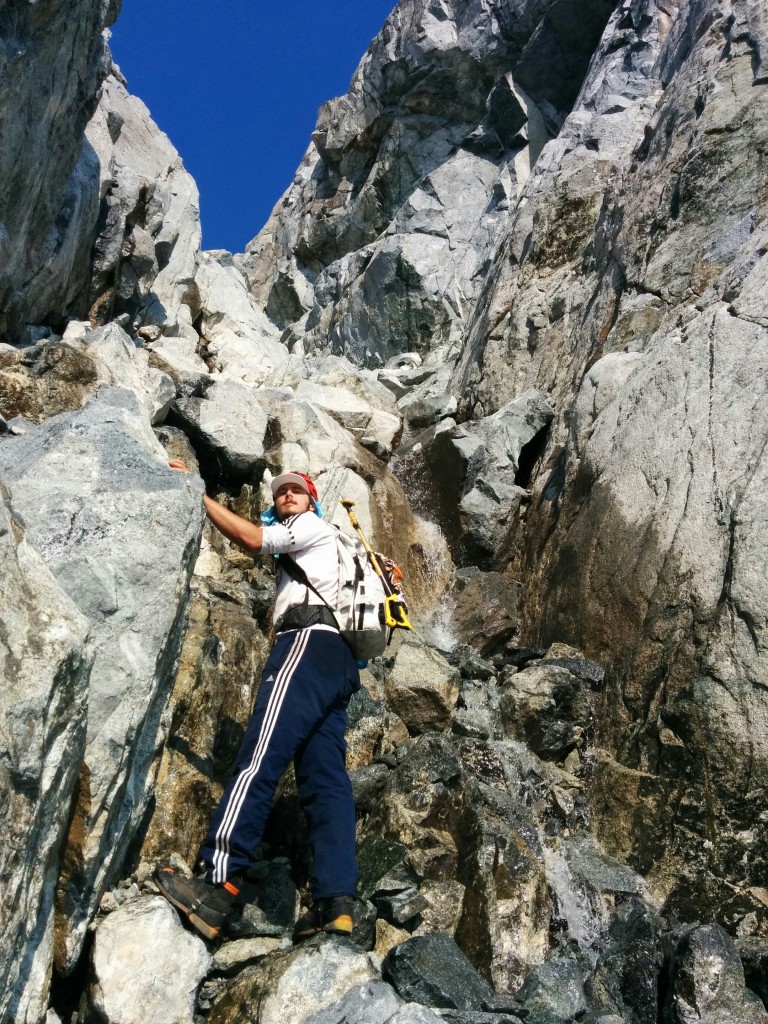 Artem in the Hourglass Couloir
Wow! Finally! The Judge! The views were a bit limited by smoke from the forest fires but still spectacular. We poked around for Tom Fyles’ original summit register but unfortunately couldn’t find it. We found a teddy bear and two water bottles with registers – the only parties in the logs were Lena Rowat and Rich So in 2012, plus another party in 2011 and one in 2007. This peak doesn’t get much traffic! There was also a curious collection of old canvas, graphite bolts, and light bulbs near the Department of Defense summit marker. We struggled to explain this and the best theory we concocted was that a weather balloon had crashed. 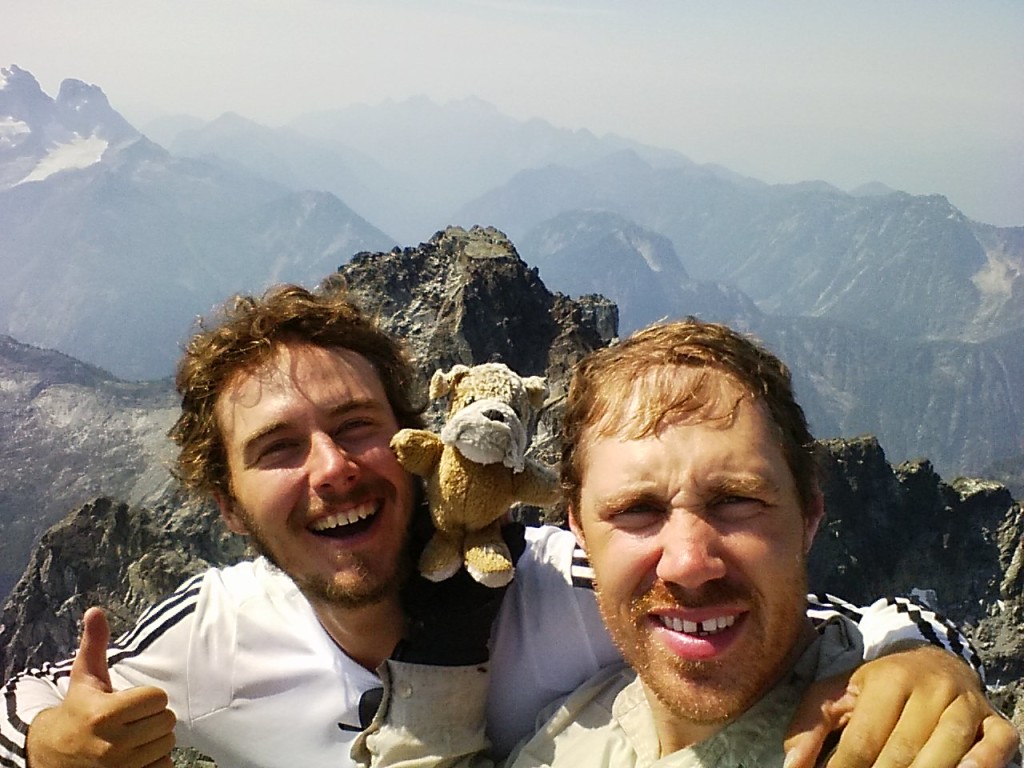 Our companion for summit celebrations 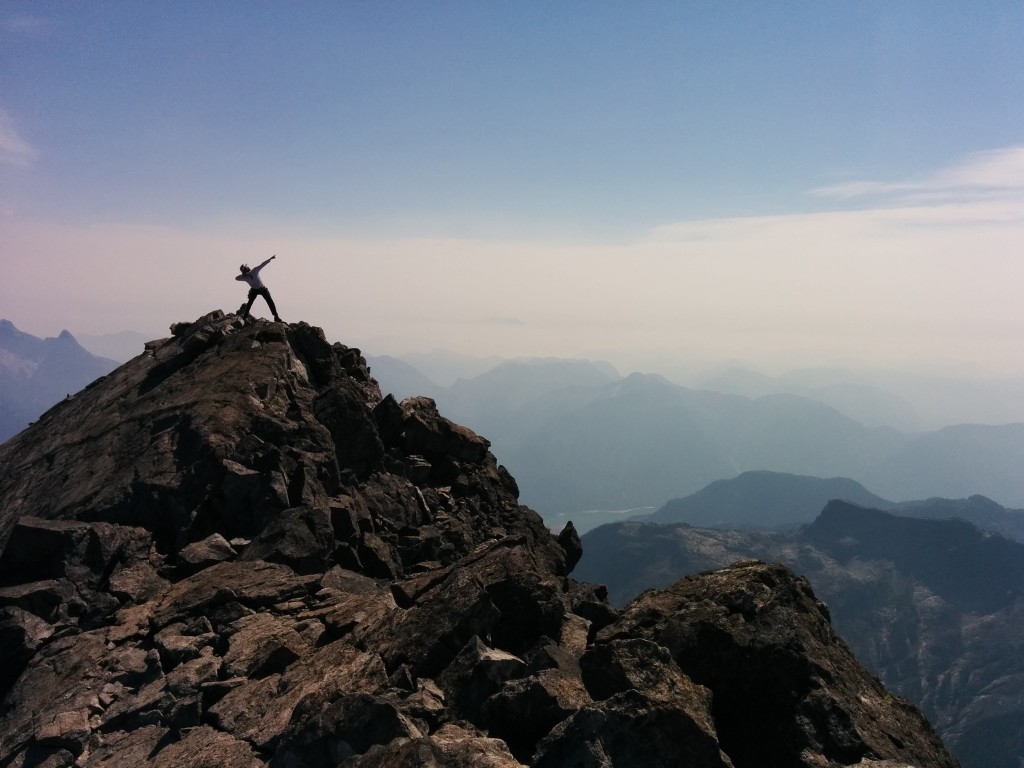 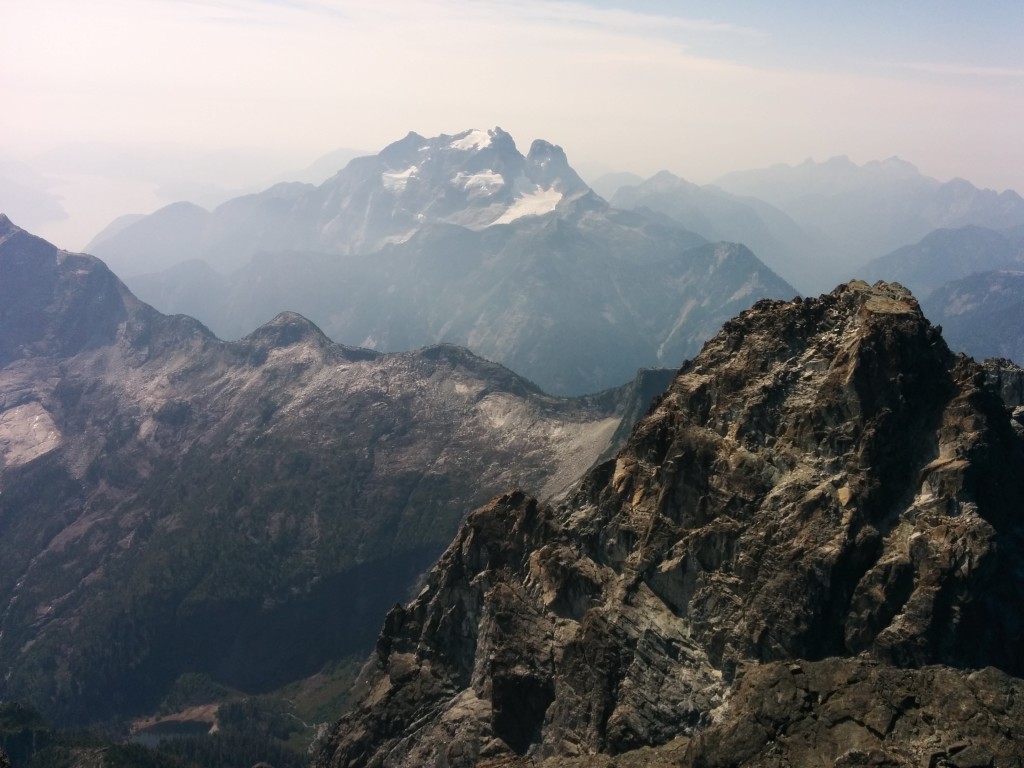 Robie Reid from the summit of the Judge
After a leisurely time on the summit we began downclimbing the crack. It was very straightforward and we didn’t end up roping up or rappelling, though other parties might choose to do so. After the snow we began our descent, which suddenly became very slow and painful. The loose scree that had been relatively fast climbing on the way up was actually pretty difficult to descend without slipping and starting rockfall. We finally got back to our bivy spot at about 4:00pm, and decided to push on as the weather forecast was deteriorating and we wanted to be out before the rain arrived. When we got to the hanging valley I slightly regretted this decision as the bottom of it is a surreal place to bivy surrounded by waterfalls and cool rock formations, but we forged on nonetheless. After filling water bottles at the last source, I tried to throw a full Nalgene back to Artem. It was actually Piotr’s nalgene that he had borrowed. My throw was a miserable fail that Artem couldn’t catch, and the nalgene shattered on the granite – not ideal but fortunately not the worst time for this failure to happen. 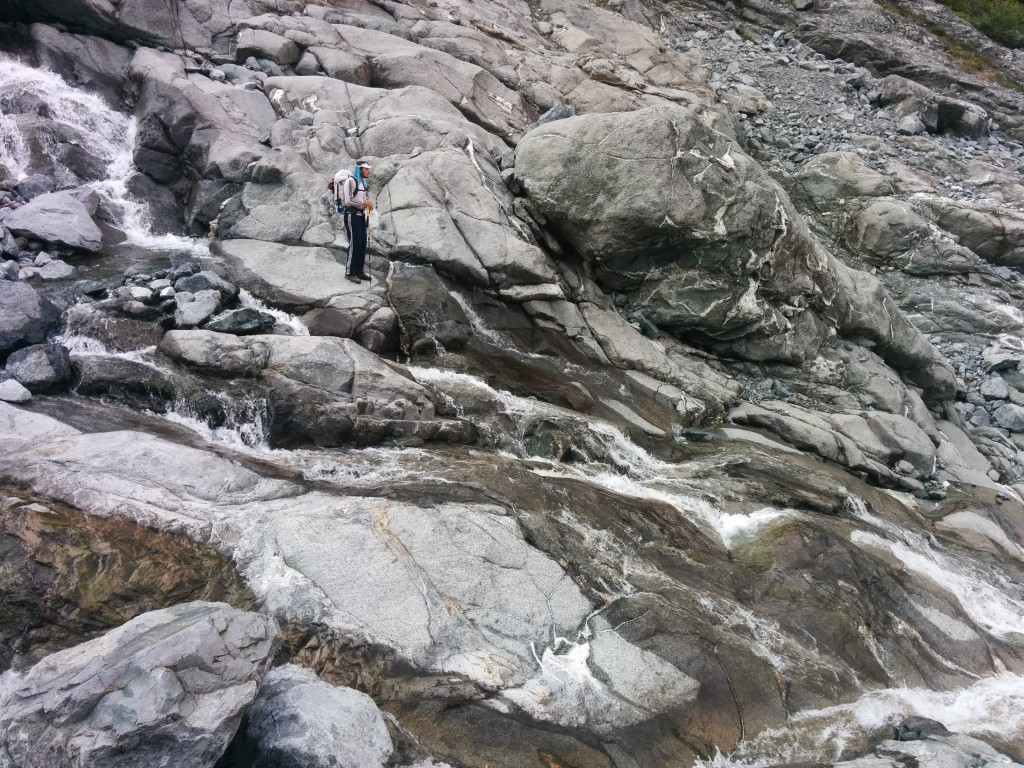 beautiful rock and water in the bottom of the hanging valley

gorgeous waterfalls on all sides of the hanging valley
The bush seemed slightly less bad on the way out than in, maybe because the summit was in the bag. We bivied at the water platform, woke up at 6:00am the next day and headed down. Fording the river went smoothly despite the fact that it had risen by ~10 cm; we realized we’d taken a big risk by leaving the boat on the far side! Artem lost a flipper-flopper to the stream, but ecstatically fished it out of an eddy lower down. We biked back along the road and stopped at the 7.5 km bridge to jump into the pools of gorgeous clear water. We ran into a team of surveyors and forestry engineers rebuilding a bridge with 4 excavators and I think we were the most interesting thing they’d seen all week: two shirtless dudes on bicycles in their underwear and carrying big packs with paddles, ice axes, and crampons strapped to the side. 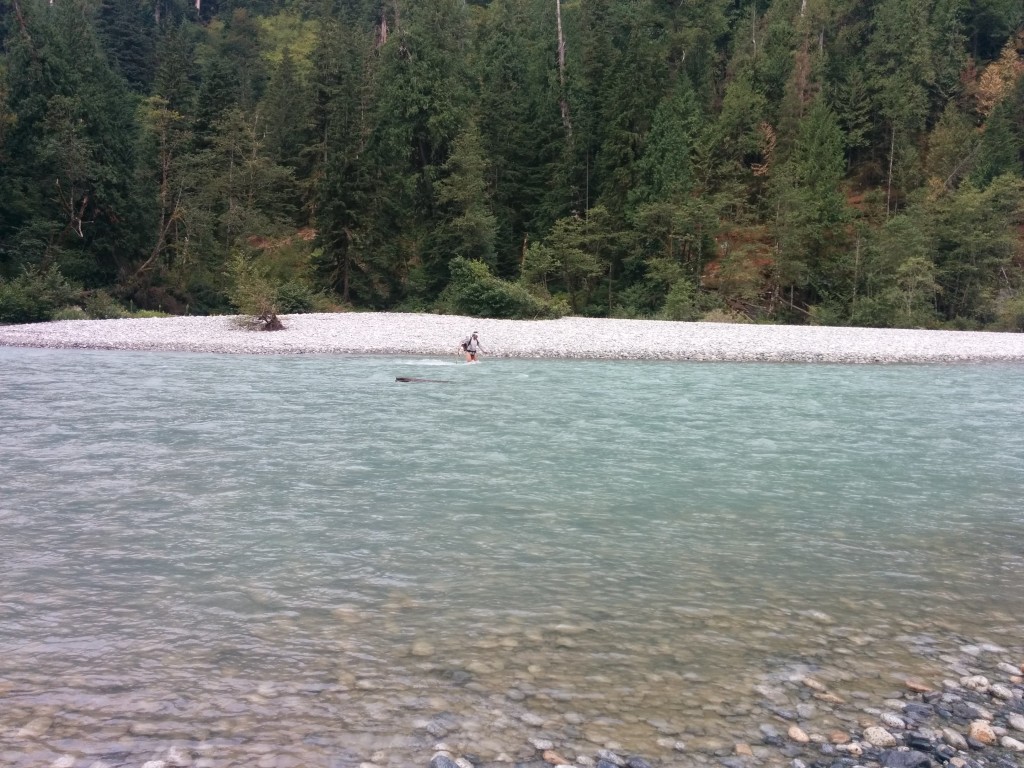 Artem crossing the river on the way home – before losing his flip flop!
The motor started cleanly and we were back across Stave Lake by 1:30 pm. Both of us finally breathed a sigh of relief – the trip had gone smoothly without any major hiccups! How was that possible? It was probably thanks to Artem’s previous two experiences on the mountain, the great TRs on bivouac.com, and all the help from Piotr. I am pretty thankful that I was able to benefit from all of it and be lucky enough to stand on the summit of the Judge on my first attempt.
Gear tips for the conditions we encountered:
- Essential gear – bushwhacking stuff (pants, gloves, snag-free pack configuration)
- Really good to have – crampons, ice axe
- Probably a good idea – rope, very minimal rock rack
- Boots – I wore approach shoes and Artem wore boots. Both worked, but if I went back I’d take boots as the approach shoes were bad for bushwhacking and the scree descent.

One Response to The Judge!