A ‘Spearhead Traverse’ that Became Deep at Steep Creek

This began as a call by Ian Johnston to repeat last year’s stellar mid-march Spearhead Traverse, which we completed under sunny skies and impeccable weather.

However, in stark contrast to 2014-2015’s dry and sunny winter, it appears that 2015-2016 is bringing endless Pacific Storms to the coast. I have seen somewhere stats to the effect that we have gotten precip for close to 20 consecutive days; Whistler is reporting over 11 meters of snow as of March 16th this year! While that is great news for my hopes of skiing well into May and June, is spelled bad news for our tentative Spearhead re-peat as roughly 70 cm of snow had fallen in the region in the days leading up to the trip, and more was forecast to come.

Not wanting to get lost in an avalanche-prone whiteout on the Spearhead, the group decided to head to Duffey Lake Road to seek out some tree skiing given the conditions. After some discussion, we decided to go to Steep Creek, which has plenty of good skiing options in poorer avalanche conditions.

From a long list of 20+ ‘interested’ Spearhead Traversers, our group ended up distilling down to a group of eight: our organizer Ian, Milen Spivak, Clemens Adolphs, Kasia Celler, Alex Annejohn, Jeremy Leal, Marco (Jeremy’s non-VOC buddy), and myself.

We all met up at Mt Currie Coffee Saturday morning, where we also bumped into a bunch of other VOC types off on various skiing ventures, and Canucks president Trevor Linden, who apparently had similar ideas despite it being a game day. I wonder if he got a helicopter to pick him up to show up for work on time in the evening! Properly caffeinated and armed with a solid plan, we headed up to the Duffey. 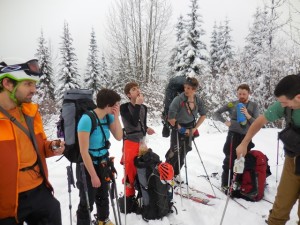 Munchies on the way up to camp. Photo Kasia Celler.

The ski up to Darkside Lake was uneventful: snowmobiles had provided us with a track and we made good time, arriving in ~3 hours. It snowed heavily. We had a quick lunch, and – lo and behold – the skies cleared up and invited up into the alpine! We quickly headed up through the trees above the lake, reaching a large bench between two hills which made it very easy to naturally split our group into two; each heading for each hill, to avoid skiing in such a large group.

We enjoyed some laps of deep powder all the way down to the flats below. First turns were a little hesitant, especially for Marco who tended to lose his skinny skis deep in the pow. I also bailed on my first run: even my wider skis managed to go “submarine” under me. We kept skiing as long as we could. Late in the afternoon some more snow squalls came through and we dropped the cruisy 300 m run back to the lake, arriving early enough to set up tents before dark. 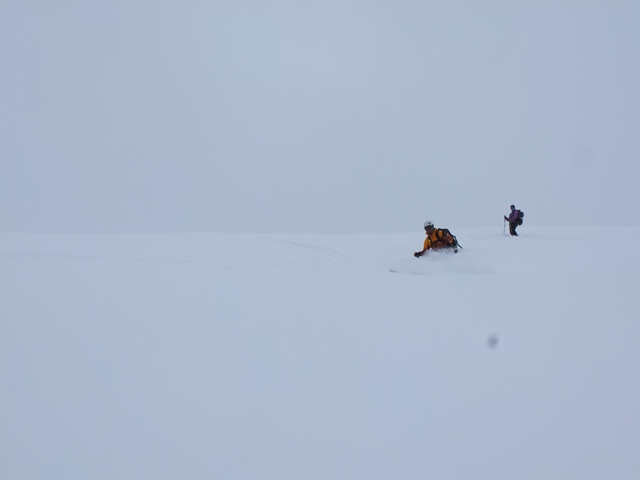 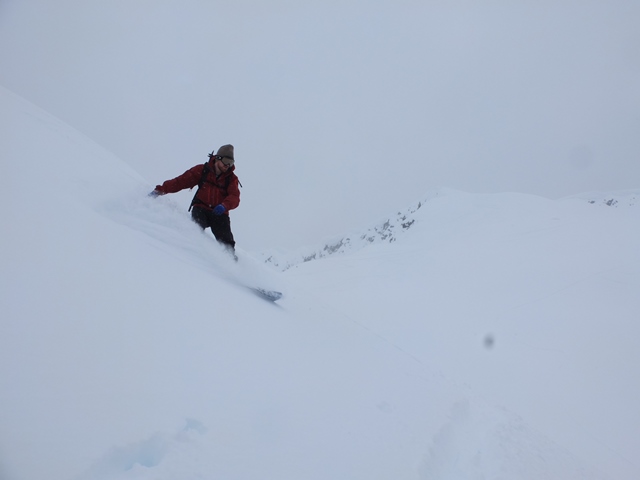 Milen, the sole splitboarder in the group. Photo Elliott Skierszkan. 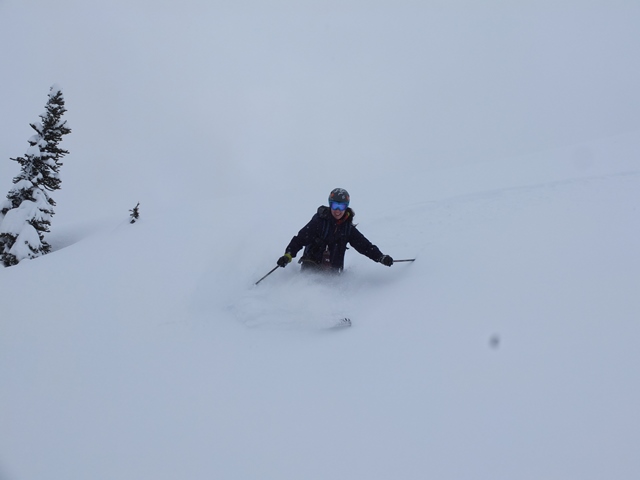 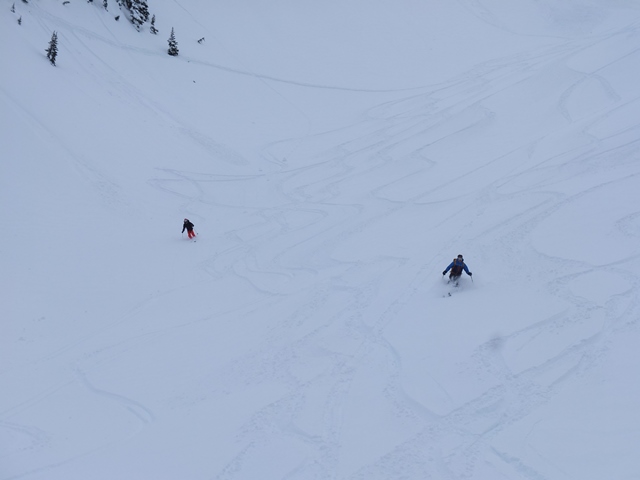 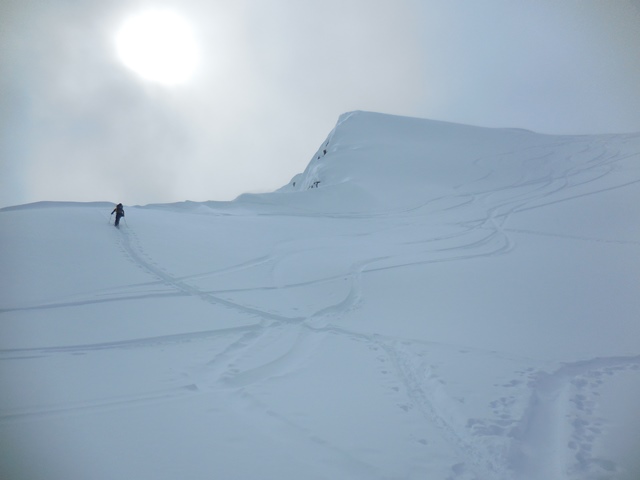 Heading up for another lap. Photo Kasia Celler.

Camping was nice: we all cooked under the canopy of a huge old-growth tree which sheltered us from the heavy snow. 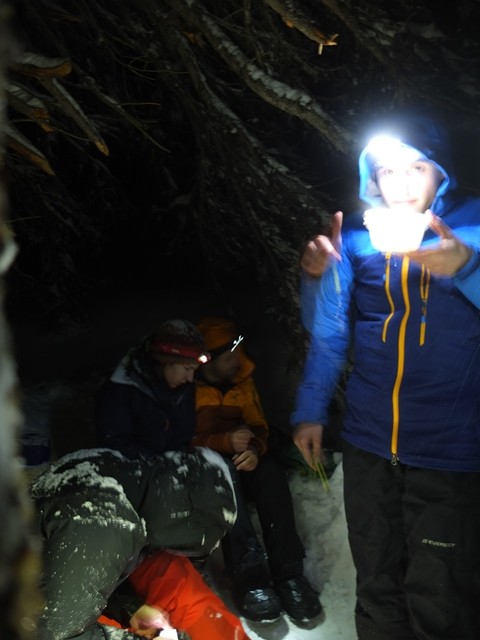 An old-growth tree’s canopy was our shelter for dinner. Photo Elliott.

In the morning, we awoke to blue bird skis and 5 cm of blower powder. Perfect: enough new snow for some excellent quality-skiing, but not too much to significantly increase the avalanche risk! We all headed off after admiring the impressive cirque of Steep Peak above Darkside Lake, a phenomenal backdrop for breakfast. With better visibility and slightly less avalanche concerns now that the 60 cm of new storm snow from earlier in the week had settled out a little more, we made it higher up to the summit ridge of Steep Peak. While this gave us excellent 400 m runs down to Darkside Lk and also down to the flats to the basin W of Darkside Lk, our line was nothing compared to the seriously steep and exposed lines that some splitboarders were cruising, riding down 50+ degree flutes and chutes off of the ridges and above cliffs. They looked gnarly, and not something I ever want to get into, but was pretty neat to see those lines getting skied. 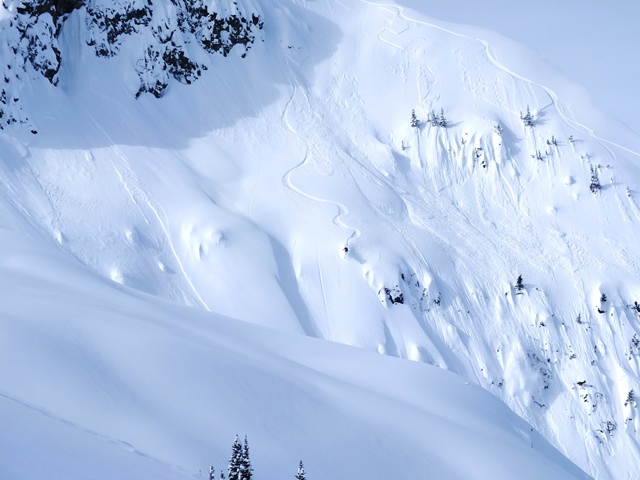 Unknown splitboarder in some serious terrain. He hucked a cliff just below, after this picture was shot. Photo Elliott Skierszkan. Jeremy at the bottom, Marco on the slope and Ian watching from above. Can you spot them? Photo Elliott Skierszkan. 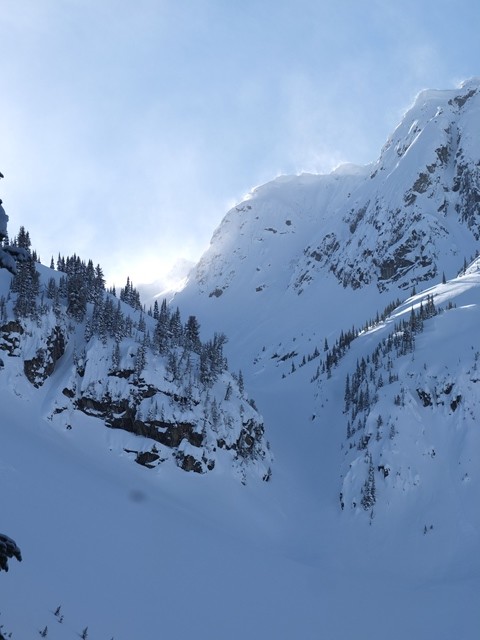 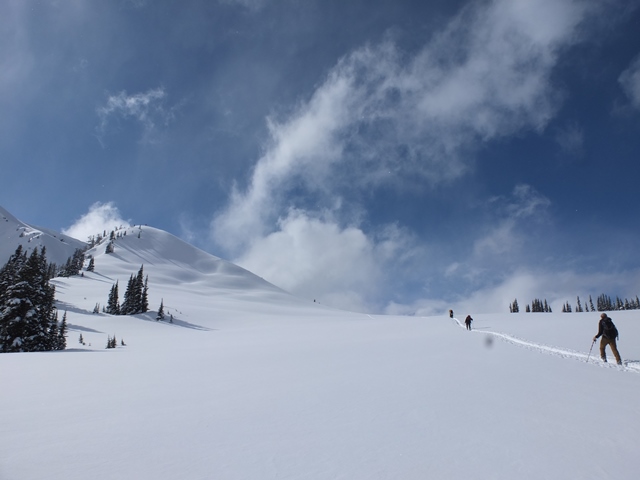 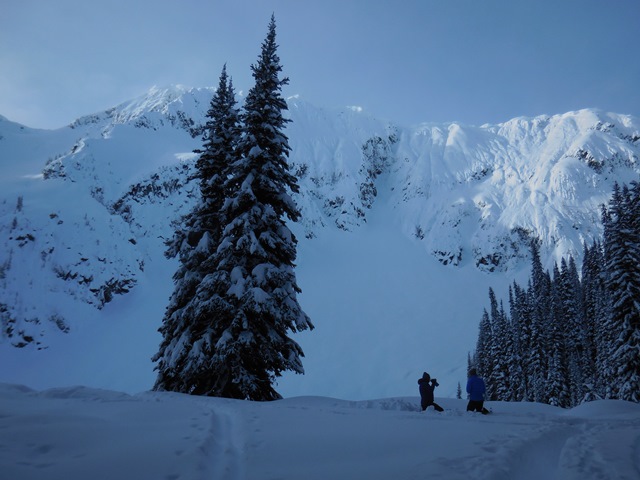 There isn’t much to report after that, just a lot of yo-yo skiing in excellent light powder. The pictures tell the tale.

In the afternoon we took down camp and skied out, except that due to some miscommunication Marco ended up waiting 45 min for the group high on the trail, and the group waited 45 min for Marco at the cars, worried that he had somehow gotten into trouble.

In the end, everyone made it down safely and we enjoyed some grub at Mags, bumping into Rich So’ ski party that we had met many times over the weekend skiing in the same area, and another VOC party of Caitlin, Julien and others. It seems like ski bums all have the same pre- and post-ski ideas, don’t they!?

All things considered, it was probably one of the best powder skiing weekends I have had this winter, and overall an excellent trip with minimal faff and lots of great times thanks to a flexible and well organized crew! The weather was exceptionally cooperative, with breaks in the storm every time we ventured above tree line and lots of good snow that was reasonably stable with good terrain selection.

The Steep Creek area has lots excellent skiing options from the steep and bold to the mellower trees, something for all skiing levels and also all avalanche conditions.