In some sense this doesn’t qualify as being a real trip report, since it involves chair lifts, and ambulances have motors, but it’s probably something most VOCers can relate to, as most end up resorting to resorts at some point.

As you drive West along the Yellowhead Trail, you encounter several resorts, and Marmot Basin is the last resort, which is kind of fitting, as it’s where you can go when there’s no snow in BC. The snow is never deep in Marmot, but it’s there for a long time because it’s at a higher elevation and latitude than all the major resorts. This year we probably wouldn’t have gone given the abundance of local snow, but I’d convinced three of my coworkers from our Edmonton office to come out and ski, so that’s what we did. No day worked for everyone, so the plan was to ski with two of them on Sunday and then the third was going to bring her family for Monday–Tuesday.

We set out Friday afternoon and on Saturday had an hour confiscated by the timezone and another by daylight savings, so we didn’t get a huge amount of sleep. Devlin was pretty low-energy all Sunday, but we still had ourselves a time. Both guys liked to jump off stuff, which lined up well with what Devlin and I like to do, so after a post-lunch coma and snit, Devlin finished off the day reasonably.

We got a good night’s sleep, and Devlin was all fired up Monday morning.

After my coworker’s family showed up, I helped them learn, as they’re all pretty new, and Devlin took off to the terrain park. We met up for lunch, and afterwards the husband and the 5-year-old daughter took off with Devlin to see more of the mountain, and I stayed on the bunny hill with the 3-year old and my coworker. Things seemed to be going great—I saw Devlin’s crew having a blast, and I’d taken the 3-year-old from being totally dependant on being held up to where he could really do nice turns for himself if only he could convince himself to let go of my pole.

The last lift was at 4:00, and at 3:55 we got the phone call that Devlin had hit a tree and had a bloody nose and that ski patrol was going to have a look at him as a precaution. He does cut through the trees all the time, but he’s always in great control, and when I’m following him, I’m much more concerned about me than I am about him. I’d assumed that if he hit something it was a glancing blow, as he never rolls the dice on something where he’d be out of control.

A while later we got a second phone call saying that Devlin was being taken down to “Lower Patrol,” which was the name of the first-aid shack. I skied down there and waited for a while and eventually heard Devlin screaming away, in a toboggan, on a back board with a neck brace. I still wasn’t particularly disturbed at this point, as I knew that if he’s pissed off with me he can scream “Why are you being so mean to me?” at the top of his lungs and get everyone within a hundred metres thinking that I’m the worst dad of all time. He was yelling that he couldn’t yawn and couldn’t breathe. While the neck brace was definitely stopping him from yawning, he could clearly breathe, as he was taking in a lot of air and screaming it out as loudly as possible. The ski patrol and eventually the paramedics were trying to get him to answer questions to check his cognitive ability, and he refused to answer any. He just yelled that he didn’t want to live anymore. There was a fair bit of blood on his face, jacket and pants.

We now had everyone in the same room, so I asked about the accident and found out that it was no glancing blow; it was a full-on direct impact with the face and torso going straight into trunk and the arms and legs missing either side.

At this point it wasn’t clear to me if he was really concussed or whether he was just in a lot of pain and punishing everyone around him. They did a bunch of tests on him, such as blood pressure, checking pupils for light response, C-spine, looking for loose teeth, blood oxygen, checking orbital bones, jaw function and the like and eventually concluded that he was likely fine. I signed some forms and we were taken by the Marmot Shuttle up to the parking lot. When we in the lot he was screaming that he never wanted to ski again, which seemed consistent with punishing me for his sins.

After a very thorough exam and a bunch of hand wringing, he was cleared to be allowed to sleep, and I went out to get some takeout and a bottle of Children’s Tylenol and another of Children’s Advil, as the hospital staff said that taking both in parallel was the ticket. The final diagnosis was a mild concussion and a broken nose.

During that outing, my coworker found me. Her family had got Devlin a pile of fancy chocolates, cheddar-flavoured larvae (like real dried larvae, not larvae-shaped candy), Bear Facts playing cards and temporary tongue tattoos.

The husband was having a guilt-festival, which wasn’t remotely fair, as Devlin wasn’t doing anything different than he would have been around me, but at the same time if someone else’s kid mangled themselves when I was with them, I’d be a complete wreck even if it was clearly not my fault at all. I did my best to convince everyone that Devlin booked his own ticket and pointed out that I trust his judgement and never tell him not to try something, as he knows his limits. I think that helped to a large degree but didn’t entirely cure the problem.

Back at the hospital Devlin had recalled that he was going to Grandpa and Grandma’s for two weeks and that we were going to Mt. Washington over the weekends there and he said that he didn’t want to do that yet. I was so glad that his memory was coming back and told him that he wouldn’t be going skiing even if he wanted to, as the doctor had sentenced him to two weeks without sports.

I’m pretty sure he hit a spruce based on the needles Devlin was shedding al over the hospital bed.

Devlin was the only patient in the Jasper ER, so I was talking to the nurse who was herself a skier. We talked about helmets and how they’re rad—nurses always love helmets because they’ve seen the difference between crashes with and without helmets enough times to understand why helmets are the ticket. Back when I was a teenager and doing mountain bike racing, I had a crash where my vital signs were weak and I lost four days of memory. My helmet was crunched, and it was pretty clear then that if my helmet hadn’t taken it I’d be a goner. Devlin’s helmet has a big dent in the front, which makes it pretty clear that he’d be in much worse shape without the helmet. Yay for helmets. Helmets for skiing. Helmets for climbing. Helmets for biking. Helmets for brushing your teeth.

Devlin was the only patient in the ER, and I made the comment that it was a slow night.

“I don’t go to those places because it keeps my life simpler.”

I guess the overall moral is that if you insist on going to the bar, you definitely should wear your fisticuffs helmet with an extra-large passing-out-while-keeling-over-the-commode helmet overtop.

After I ate and Devlin declined to, we were cleared to go back to the hotel. I let him go to bed without brushing his teeth this one time.

At the advice of the nurse I got him up at 1:00 in the morning to give him another dose of Tylenol and Advil and then let him sleep as long as he wanted to, which turned out to be not that long, only till 7:00.

When Devlin got up he was much more himself. He had lots of energy and tried to convince me that skiing today was a good idea, as he’d stay on the green runs and be really careful. I told him that I liked his attitude but that the doctor’s sentence was final and there was no court of appeal in concussion recovery. He also remembered almost all of the day before except for the crash itself. Of the long list of concussion symptoms on the information sheet I got from hospital the only one Devlin was showing was a mild headache. He said his nose and teeth both hurt more. 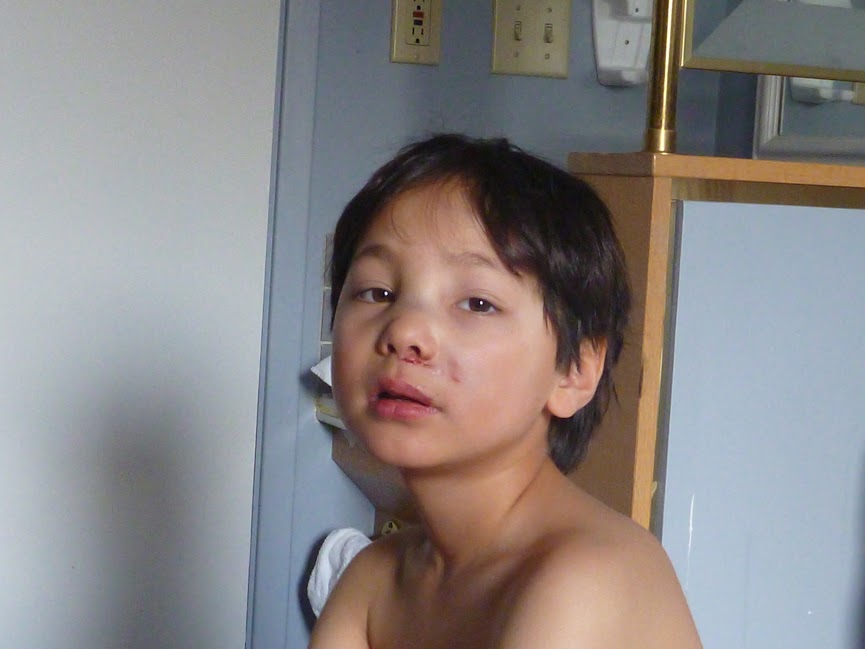 Devlin’s broken nose the morning after 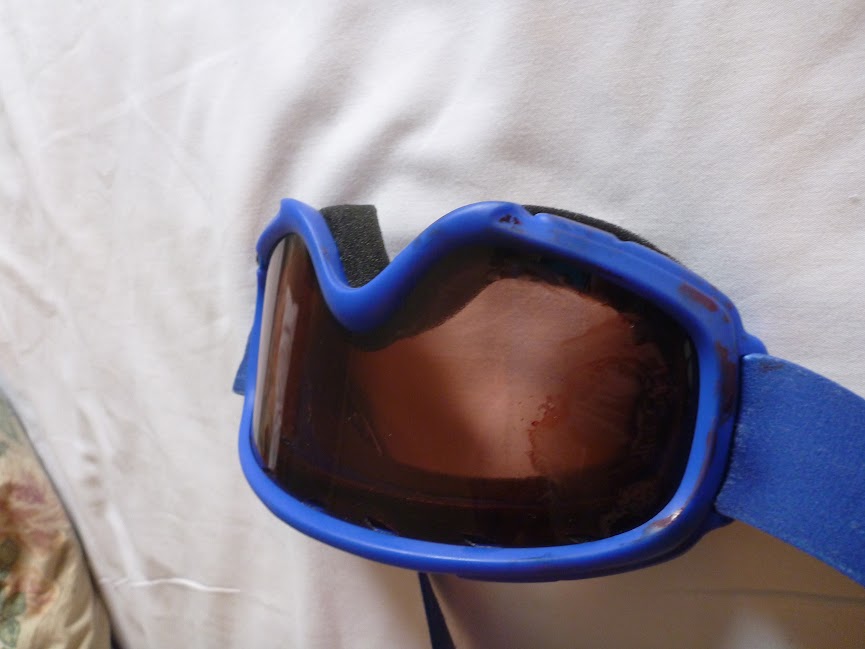 One thing he did mention was that when he was ahead of the party he was skiing with he went off this “cornice” (as he called it, which was made by the snow cat but had a similar profile to a real cornice) and a gust of wind spun him around and he landed backwards. Probably I’ll never know what caused him to ram the tree, but given that he’s pretty light and he’s normally dead centre through the gaps, it makes more sense to blame it on the wind than to blame it on the rain. (not that it was raining, but a Milli Vanilli reference always helps to make sure a trip report that’s going for the bottom of the barrel actually gets there)

We had a fairly uneventful ride back home. We stopped for lunch in the town of Barriere, which rhymes with derriere, at this family diner. Devlin was hiding his face because he was ashamed of the scabs, even though I kept pointing out that he wouldn’t think bad things about someone with scabs, so other people should not judge him.

I don’t think the kitchen staff really understood how much sound travelled to the dining area, so I’d hear things such as “…took him out back and gave him a blow job…”. The waitress could clearly hear it but was trying to ignore it. She’d been trying not stare at Devlin, but when I was paying, she asked me, “What happened to him? It looks like he was riding a rodeo bull.”

When we got home my wife asked him if he was going to stay out of the trees and on runs from now on. He immediately looked up at me with these desperate eyes to try to pull me onto his side, which demonstrated that he still has a very good grasp of how to manipulate his parents into getting what he wants.