Do you know that feeling when you first get up in the morning and for several seconds have no idea where you are or how you got there? I had this same feeling that morning just before I completely woke up. Or rather I couldn’t recall for several seconds which decision we made the previous day on that trail. Am I now lying in cold snow somewhere in the wild forest, or on a warm bed in a hotel room? What did we decide yesterday? After this terrifying thought I woke up abruptly and realised with relief that we made the right decision. I apprehensively moved my legs and arms a bit to estimate the amount of damage caused by yesterday’s stroll. Surprisingly enough I didn’t feel any kind of soreness in any part of my body. Damn, it’s so good to be young! 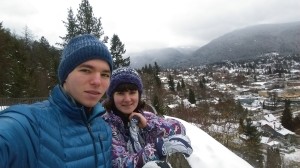 After a cup of coffee, we finally entered the appropriate state of mind to start thinking about what on Earth we’re going to do next. I don’t want to say anything rude about Nelson, but being stuck in semi-rural location without a car or a budget adequate for skiing at a resort in Nelson makes the vacation a bit boring. Luckily enough, Dina had a brilliant idea! We had 3 booked huts on the traverse, one of which, the one closest to Castlegar, was booked for New Year’s night! The idea was to get up to that hut from Castlegar and spend the New Year there. This idea was accepted! 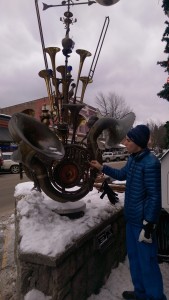 Before moving to Castlegar we spent a few hours in Nelson walking in nice park, enjoying old architecture and eating delicious pizza. After being convinced of the beauty and charm of this town one more time we took a bus to Castlegar. Interestingly, a developed transit system operates in the whole West Kootenay area connecting towns like Salmo, Nelson, South Slocan, Castlegat, Trail and Rossland. For more information see http://bctransit.com/west-kootenay/home. I would’ve been very glad to know about this before coming to Nelon, as we could possibly use transit to get to the trailhead.

We already had our hotel booked before we came to Castlegar. This was the same hotel, “Chameleon”, which we booked for the time when we had to get back from our ski tour. This hotel actually deserves a more elaborate story.

A few days before coming to Kootenay I called to this hotel to ask about snow conditions and whether someone could pick us up from Bombi Pass (the final point of our ski tour). Surprisingly to me the owner agreed to meet us at a fixed date and time. I was very surprised, because when I was calling to Nelson the only thing that I was offered was the phone number of the taxi cab office. Despite all my effort I couldn’t figure out what accent the hotel owner had. After we met, he confessed that my accent was also a mystery for him. It turned out that that owner was German, but more interestingly was the fact that his wife had an accent that I couldn’t confuse with any other. This was the first time I met someone in Canada from my homeland, Moldova! We couldn’t resist the invitation of the hosts to have dinner in their restaurant. The combination of 2 famous cuisines exceeded all our anticipations, it was a return home!

The next day started more smoothly than any other day during this trip. We loaded our stuff in the old Mercedes and in about 20 minutes we were already getting ready for the skiing and listening to why German cars are better than American. After we agreed with Hans on the meeting time for picking us up tomorrow, we shook hands and hit the trail.

The first part of the trail was following the power line and an active logging road that goes north. The trail had very hard packed snow so it seems like this trail was very popular with snowmobilers. One more annoying thing besides snowmobilers was the constant 50 Hz humming from the power line. 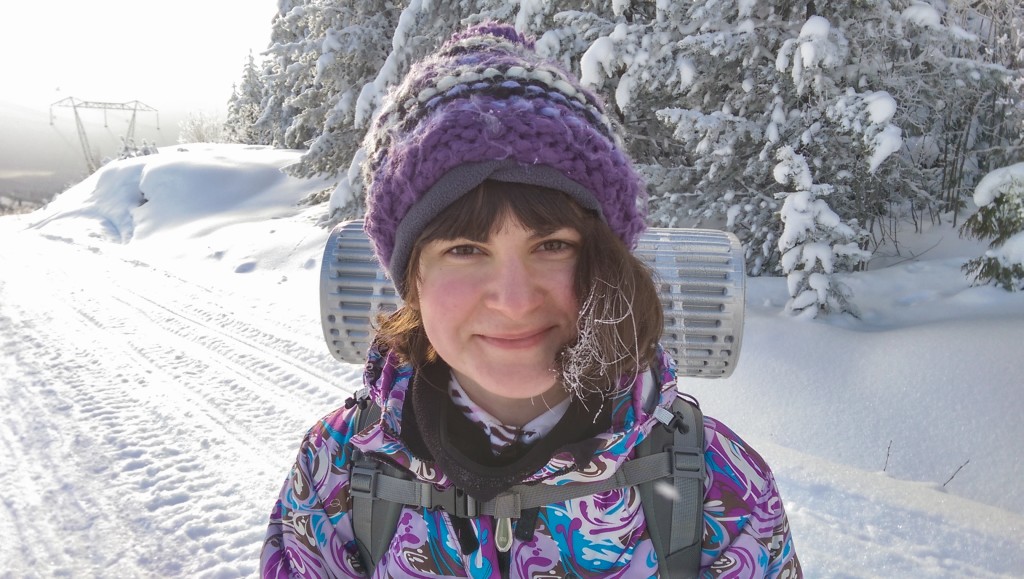 Finally we stepped onto the trail that leads away from annoying electric humming and stinky snowmobiles. The trail began to go up in elevation and we started to count turns. 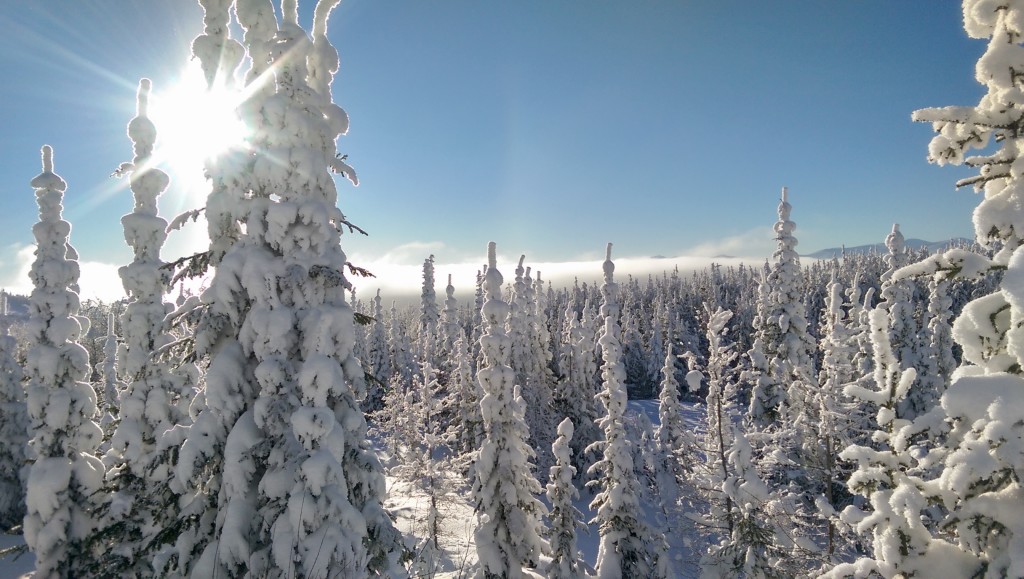 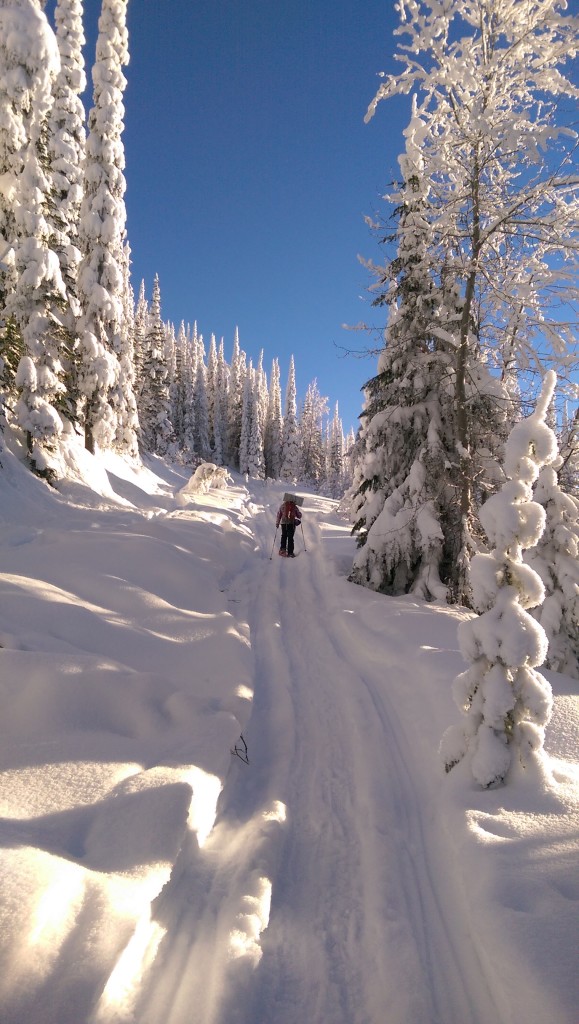 It was about half an hour to down and the hut my GPS on the phone showed around 500m to the hut. When we were within 30 m from the hut, it didn’t look like there are any tracks that would lead in its direction. Well, maybe we took an uncommon path of getting to the hut, so we decided to make out own tracks. We started to worry a bit when after 20 m we didn’t find any signs of the hut. It was dark enough that we might just didn’t see it. We put our headlamps on and started searching. After about 10 min of searching and a brief meeting we came to the conclusion that the hut isn’t anywhere near this location and that it is not even possible to build anything on such steep slope. At this moment we realized that there was a real possibility of spending the night outside on the snow. This possibility didn’t exactly warm our souls, since we were not prepared for this, neither equipment-wise, nor mentally.

This was a situation that can be described as “become creative or die”. The only idea that came to my mind was to find a wide path that would lead to the hut. According to description and different forums it was pretty much clear that the hut has to be somewhere near, so we were pretty motivated. We returned to the last track that we encountered and followed them. Later these tracks brought us to a wide trail that no doubt had a hut on one of its ends. We decided to check the uphill first, in case we made the wrong decision we would save ourselves half of the climbing distance. It turned out we did the wrong decision the first time, but after that we knew where the hut is! It took us an hour in total to find the hut, then in complete darkness we finally saw the triangular roof 20 m from us.

The hut wasn’t empty, and we were greeted by a couple from Prince George (I guess) who were doing the Traverse in the opposite direction. These guys managed to melt a pot of water and heat up the hut, so we came just at the right time. The hut has 8 sleeping spots, but I can’t imagine all eight people being in that hut at once while not sleeping, judging from how small it was. It had everything necessary for surviving: a heating stove and a supply of wood for it, a cooking stove running on liquid fuel (fuel is not provided) and dishes, including pots for cooking and huge pans for melting snow.

After the dinner we felt so tired that we didn’t even wait for the New Year to come. This holiday completely lost the charm that it had when I was a kid. Sad. 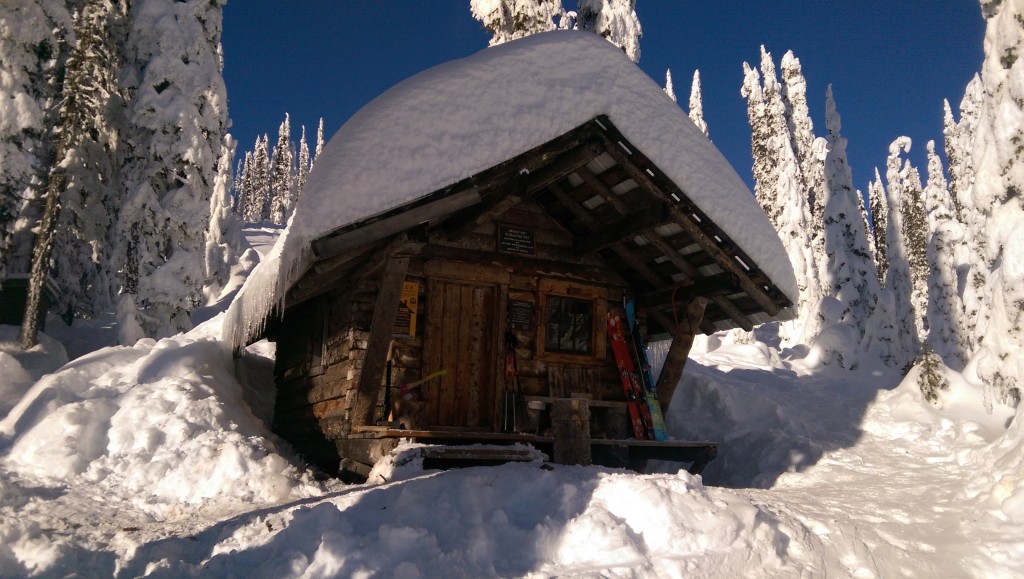 The return was much more painful for me, since next morning the blisters on my legs felt really terrible and it became much worse when we started to move. In addition to that I lost my sun glasses which caused some struggles as well.

Since the trail wasn’t that steep and sometimes was going uphill I was sick of taking skins off and putting them on every time there was a little hill on the way.

In the end we made it to the parking lot on Bombi Pass where we met a punctual German guy and went back to Castlegar.

It was definitely not a type 1 fun trip, rather type 2, although it is my second ski-touring trip. There is a long list of things that I should have done before this trip and will do before next trip to finally end up with type 2 fun. Now I am looking forward for summer which brings more familiar activities like bikepacking and kayaking. See you in the outdoors!