Nick Gobin, Marius Muja and myself (Olek Splawinski) made plans to ski across the Garibaldi Neve. We opted for an early start, hoping to ski Garibaldi peak if conditions were favourable.

Marius and I left North Vancouver at 03:30 and arrived in Squamish at 04:30. We stopped by Tim Horton’s to pick up a breakfast sandwich for Nick. Turns out that the south Tim Horton’s location does not open until 05:00. Fortunately, the north location is open 24hrs. Even on Good Friday. 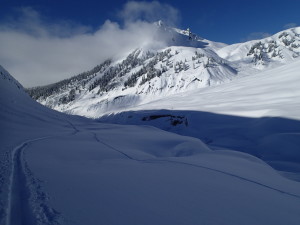 Skinning out of Ring Creek

We picked up Nick from his house near Quest University, and arrived at the Red Heather/ Elfin lakes parking lot at 05:00. We departed at 05:15. It was snowing lightly at the parking lot. We stopped quickly at the Red Heather shelter at 06:15, trying our best not to disturb the campers who were sleeping near the shelter.

Our next stop was the Elfin Lakes shelter at approximately 07:15. Nick and I took advantage of the 4 stall washroom facility. Free toilet paper is always a plus. Nick complained about the single ply.

At the shelter, we met up with 2 other parties who were leaving across the Neve. They had camped at Elfin the night before. We let them forge the trail while we had a quick snack. The views from here were beautiful. The cold morning sun cast a blue hue of light on Garibaldi peak. The clouds quickly burned off garibaldi and neighboring peaks. 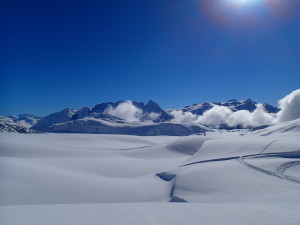 Views from near Opal Dome

We passed one of the Neve parties on the way down to Ring Creek. They were very heavily equipped.

I became very jealous of Marius and Nick’s dynafit Mohair skins. They were much faster on the downhill/flat sections than I was.

Unfortunately, I managed to forget my beacon in a snow bank when the 3 of us stopped to de-layer and check the map. I realized my error just before we did the final descent down to ring Creek. Marius let me borrow his skis to go back and retrieve my beacon. I made good time, returning to Ring Creek after about 20 minutes. Marius and Nick did some fishing for water while they awaited my return. 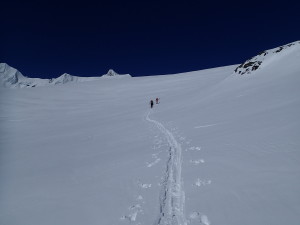 On the way out of Ring Creek, we crossed paths with a party of two who were skiing in the other direction. According to their account, they had spent the majority of the previous 3 days camped in a snow storm. We asked them about conditions on Garibaldi peak. They described a lot of fresh snow and north face wind loading. This coincided with the avalanche bulletin.  We found it odd that they would tolerate 3 days of adverse weather, given that they were far less than 3 days from civilization. They sounded American, though, so we gave them a break.  Many Americans have probably gone to much greater lengths to avoid hearing news about Donald Trump for 3 days.

As we approached the ridge crest near Opal Dome, the sun began to creep up into view. I opted for the underwear only layering approach in an attempt to avoid overheating. Unfortunatley, I forgot to pack my sun hat. I applied sunscreen liberally and frequently, hoping to avoid sunburns. 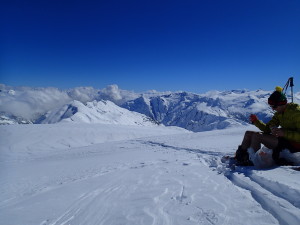 Olek Splawinski taking a break in his underwear. A mysterious triangular shaped sunburn would later develop on the back of his right thigh.

We set our own skin track towards the Garibaldi-Tent col. Once we had a nice vantage point, we stopped for lunch at around 11:15. Marius was a bit hypo-glycemic at this time, so he was happy to recharge.

The party ahead of us had decided to stop for lunch at around this time as well. We saw them about 100m elevation below us.

One party member was enjoying his lunch about 20m away from the others. We decided that he was probably exiled from the group due to smelly farts. 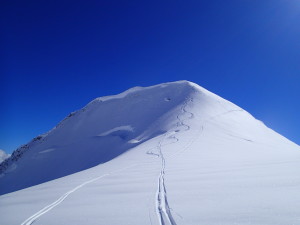 After lunch, we quickly skinned up to the summit of tent peak. We boot packed the last 30m along the ridgecrest. Skiing was fun off the summit. We skinned up to a wind loaded, North Easterly slope on Garibaldi peak. We dug a pit here, deciding that it was probably the most representative of snow that we would be skiing from the summit. 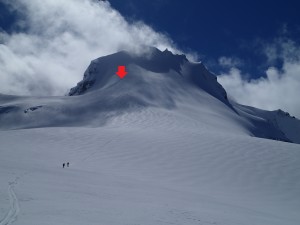 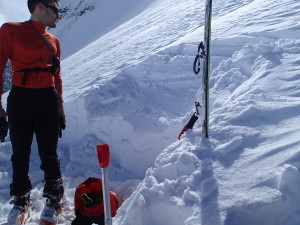 Olek Splawinski looking at the clean slide on the 50cm weak layer after jumping above with skis on.

We stopped at the Shark’s Fin around 14:00 to attempt to scramble to the summit. Being the strongest climber of the group, I led the way. The rock was very loose. I made it to the sub summit (Adipose Fin?), but decided it was not worthwhile to continue.  Although I was 98% sure that I would be be able to make it to the true summit without incident, I was discouraged by the crumbling rock. Partial snow coverage of the ridge line made it difficult to discern the structural stability of some sections.

When we realized how difficult it was to down-climb from our high point, we were all very happy that we decided to forgo the true summit. 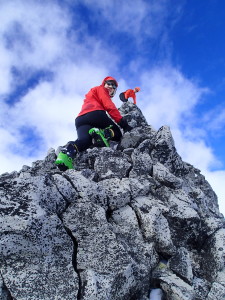 Olek Splawinski and Nick Gobin scrambling down from the Shark’s Fin Sub-summit. 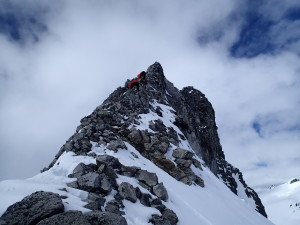 another view of the Shark’s Fin

We skied down to skier’s right of the fin towards Garibaldi lake.  During the proceeding flat/uphill section, Marius and Nick opted to put on their skins. I stayed skin free. We were ready to descend from our final high point at around the same time.

On our way down to Garibaldi lake, we passed a skier from another Neve traverse party. He was skinning towards the glaciology huts. Apparently one of his party members had lost a ski and delayed their group. They had opted to stay the night at the glaciology huts.

Garibaldi lake was boring, but we made it across. Nick opted for a clipped in skating technique, which was quite fast. When he switched to classic, however, it hurt his knees. Marius and I quickly caught up.

Parties that we passed along the Neve reported that the snow started about 4.5km up the switchbacks. We were uncertain how this would bode for conditions on the barrier.

Nick and I had experienced very good conditions along the barrier in January. We decided that it would probably be a good idea to ski it again. We confirmed on the map that the turnout point is just below 900m elevation.

Marius was not convinced about the barrier. The previous time that he had skied it, the snow coverage was not adequate. His party had to jump over the river 3 times to make it to the turnout.

In the end, Nick and I skied the barrier, while Marius went down the switchbacks. Conditions were good. We skied through molasses-like snow most of the way down. We triggered some very small wet slides, but coverage was good. Nick and I arrived at the parking lot around 19:05. We waited about 5 minutes for Marius.

Nick’s girlfriend, Mel, was kindly waiting at the parking lot to shuttle us home. Unfortunately, she had run the car battery flat while waiting for us. Fortunately, another hiker witnessed our failed start. He was right next to his vehicle.  What ensued next was the most efficient unplanned jump that I have ever seen executed. Nick pulled out his jumper cables from the back and the car was started in less than 90 seconds after the failed start. It was truly pit stop worthy.

All in all, it was a great trip that required me to do very minimal planning. In total, about 4 emails were exchanged. It was great to be out in the mountains with good friends. Thanks, Marius and Nick!