Exec Note: There are a few Trip Reports which got ‘forgotten’ at the pending stage on the website. Apologies that they weren’t published when they were submitted. We’ll release the few others like this over the coming weeks.

With an early morning pickup at 6:30, we (Tucker, Marie, Anne, and Joakim) set out for the Tantalus range on a crisp, clear fall morning. This was one of the last weekends where hiking in the area was manageable, so we were all pretty stoked about the way the weather turned out.

We met at the Timmy’s for an obligatory coffee and donut (how else would we get started?) and linked up with the other car pools (Jack, Mirko, Ben, Amin, and Dave) found our way down the Squamish Valley road to the Sigurd Creek trail head, right after some bridge crossings and before the power plant on the side of the Squamish river.

The hike began with on a logging road but granted us unexpected vista’s early on of the backsides of some of Ossa’s pointy brothern. 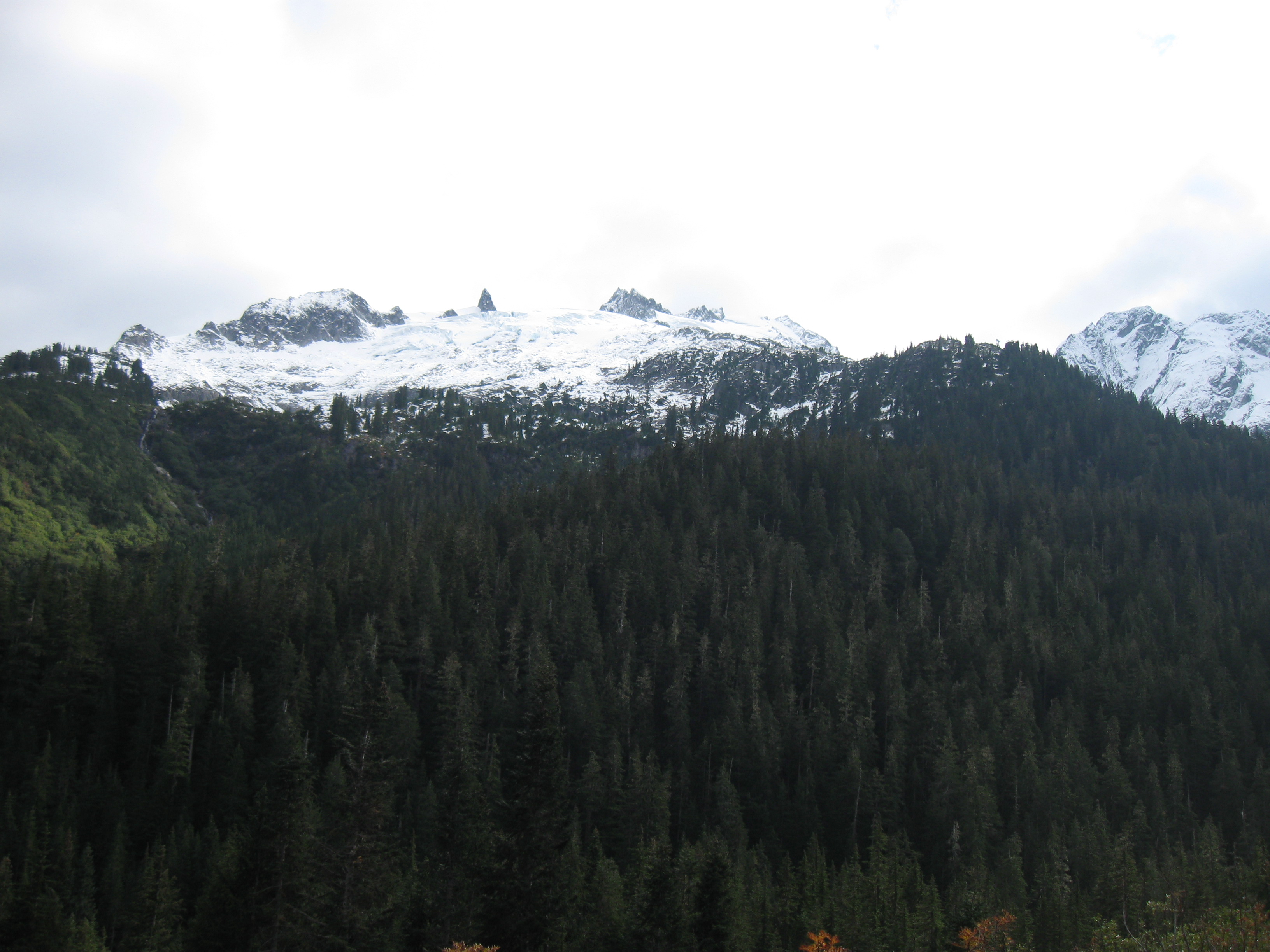 We followed the rolling sounds of Sigurd creek as it wove beside us, crossing our path several times. One particular crossing had a bit of BCMC ingenuity with interesting log bridge with little ropes hung on pullies to give confidence while crossing the waters. 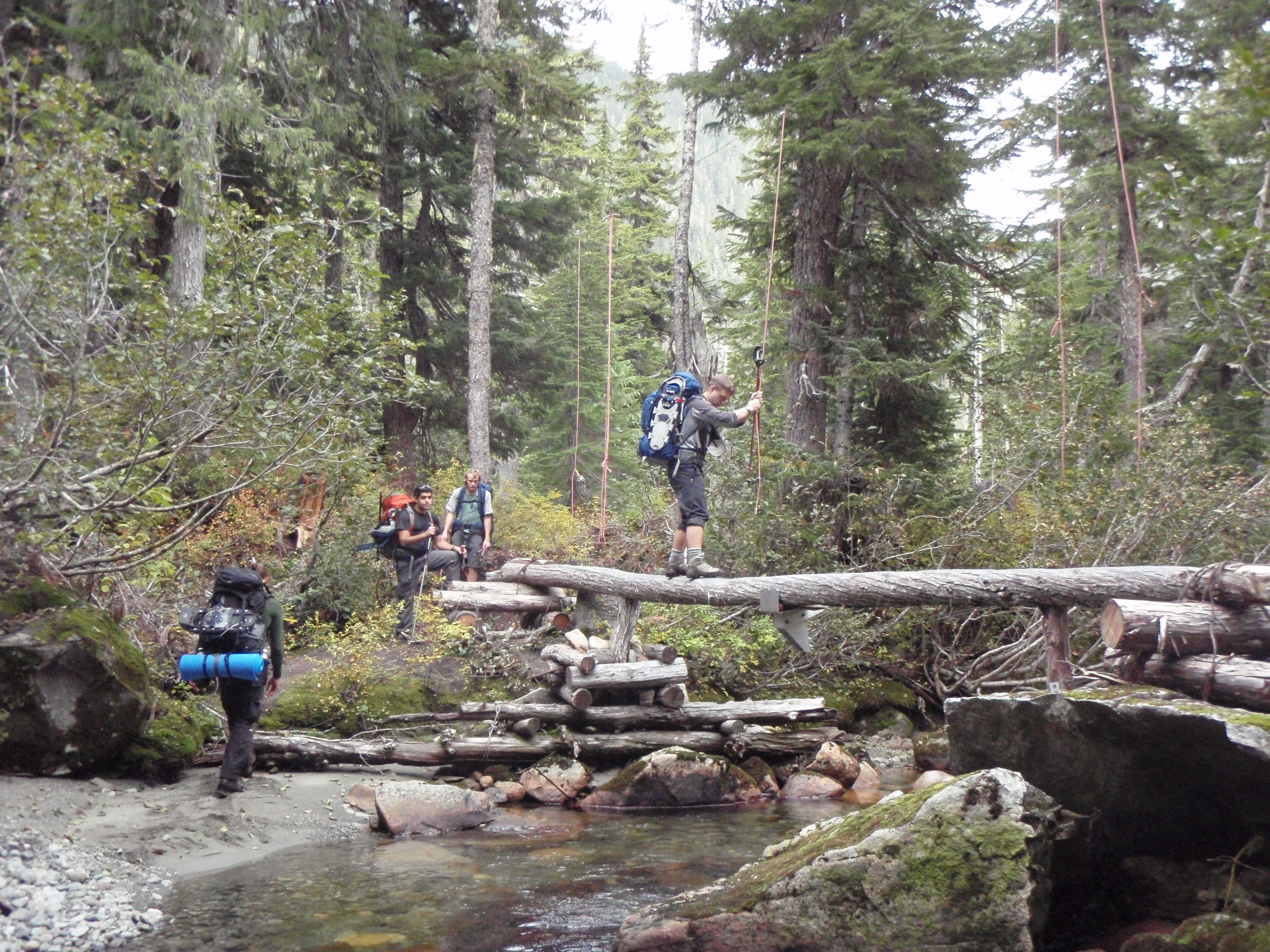 We continued along through the forested route, through some meadows, following the well marked orange diamonds. Stopping for lunch at a “creek” (which turned out to be a pile of rocks), we enjoyed the sun and honed our winter tans while nomming some delicious snacks.
As early afternoon approached, we finally emerged from the dense forest to be rewarded with a creeping glacier on the eastern face of the formidable Ossa (not really shown in full). 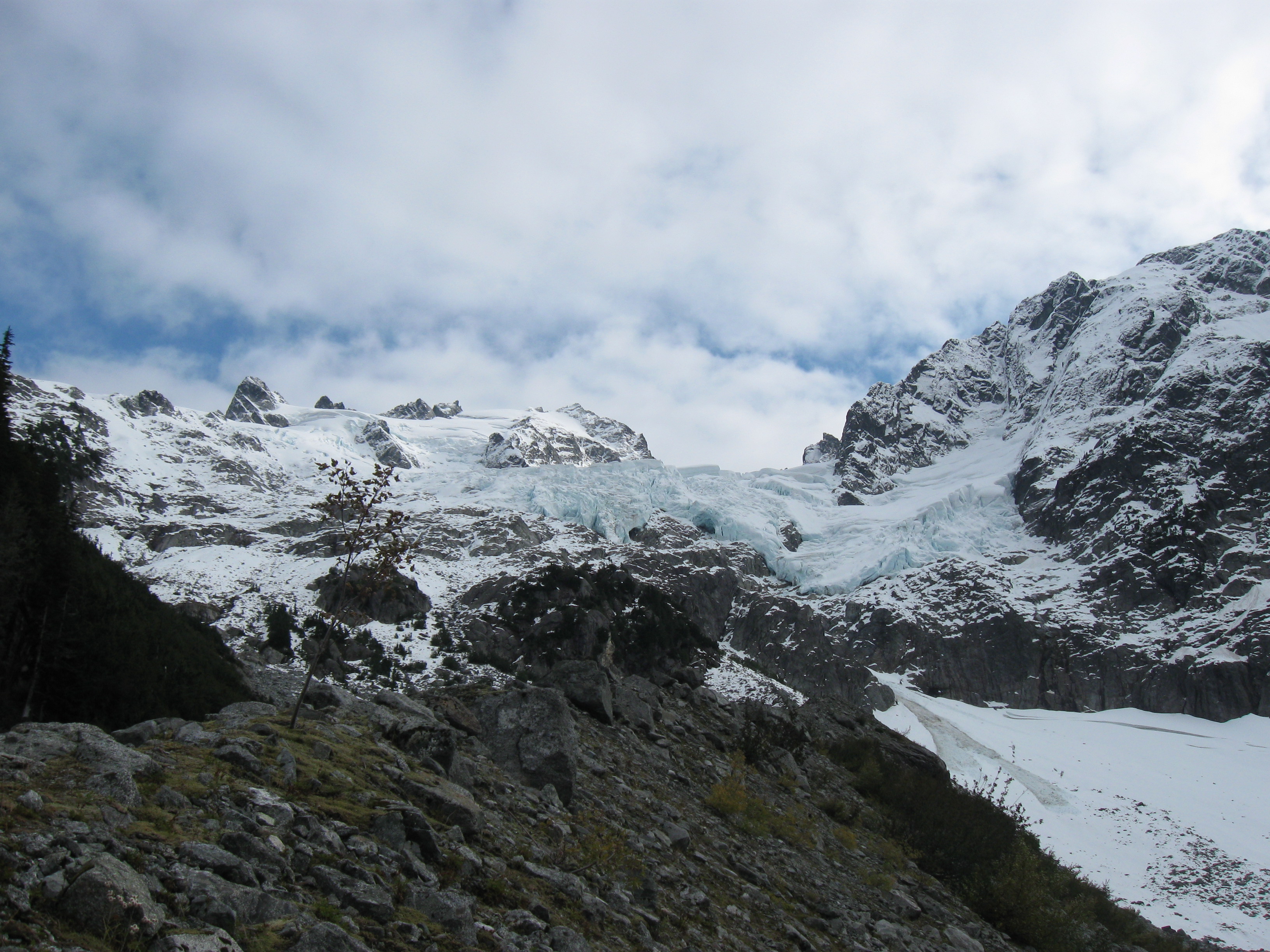 The next section was a mixture of rock hopping through bolder fields and some dense bush wacking through some alpine vegetation. We gained tree line at about 1200m and discovered a grouping of lakes Marie had heard of through previous reports. 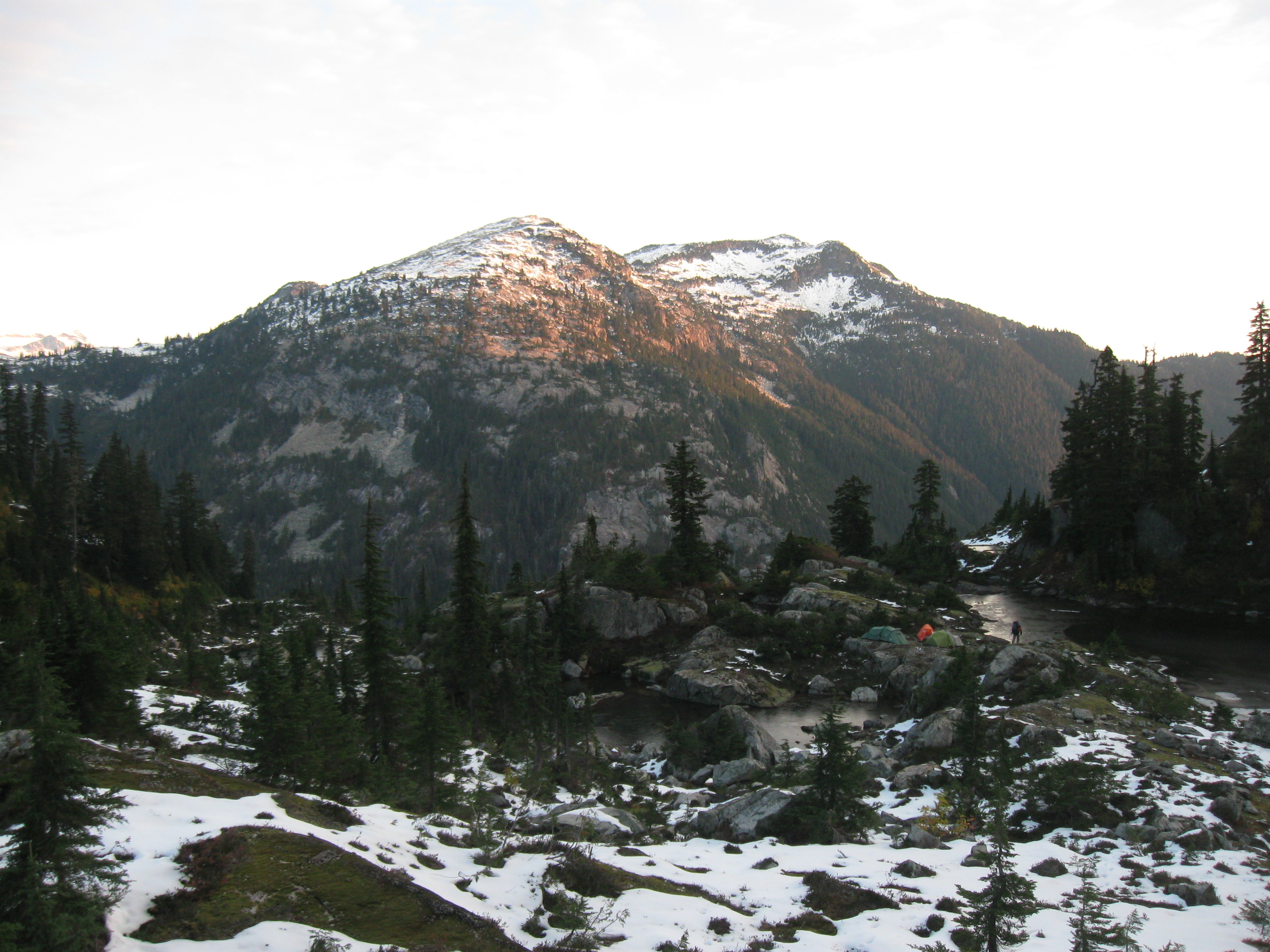 The vistas of Mt Sigurd to the NE were astounding with the late afternoon, low angle light illuminating the contours of their rocky spines. What wasn’t quite as astounding was the lack of camping. We ended up pitching tents on the rock beds beside the lakes and weighting down our tents with rocks and ropes tied to nearby shrubs. (For those planning on doing this trip, if you hike up to the creek that you follow to the summit of Ossa there is potential for better camping, albeit kinda swampy at the time we went in mid October, good for summer though).  The lake was full of “rock fish” though (actually just rocks being thrown into the lake, but they sure looked like fish).
Ben had brought his high powered binoculars up and as darkness came, we had a look at the stars and the waning moon. After a fire and some hot food, we all went to sleep.
After a cold night’s sleep, the lakes frozen around us were thawed as the sun rose over Mt. Sigurd. We ate some breakfast and were out early for a chance at summitting Ossa.
(Sweet snow cave on the way up) 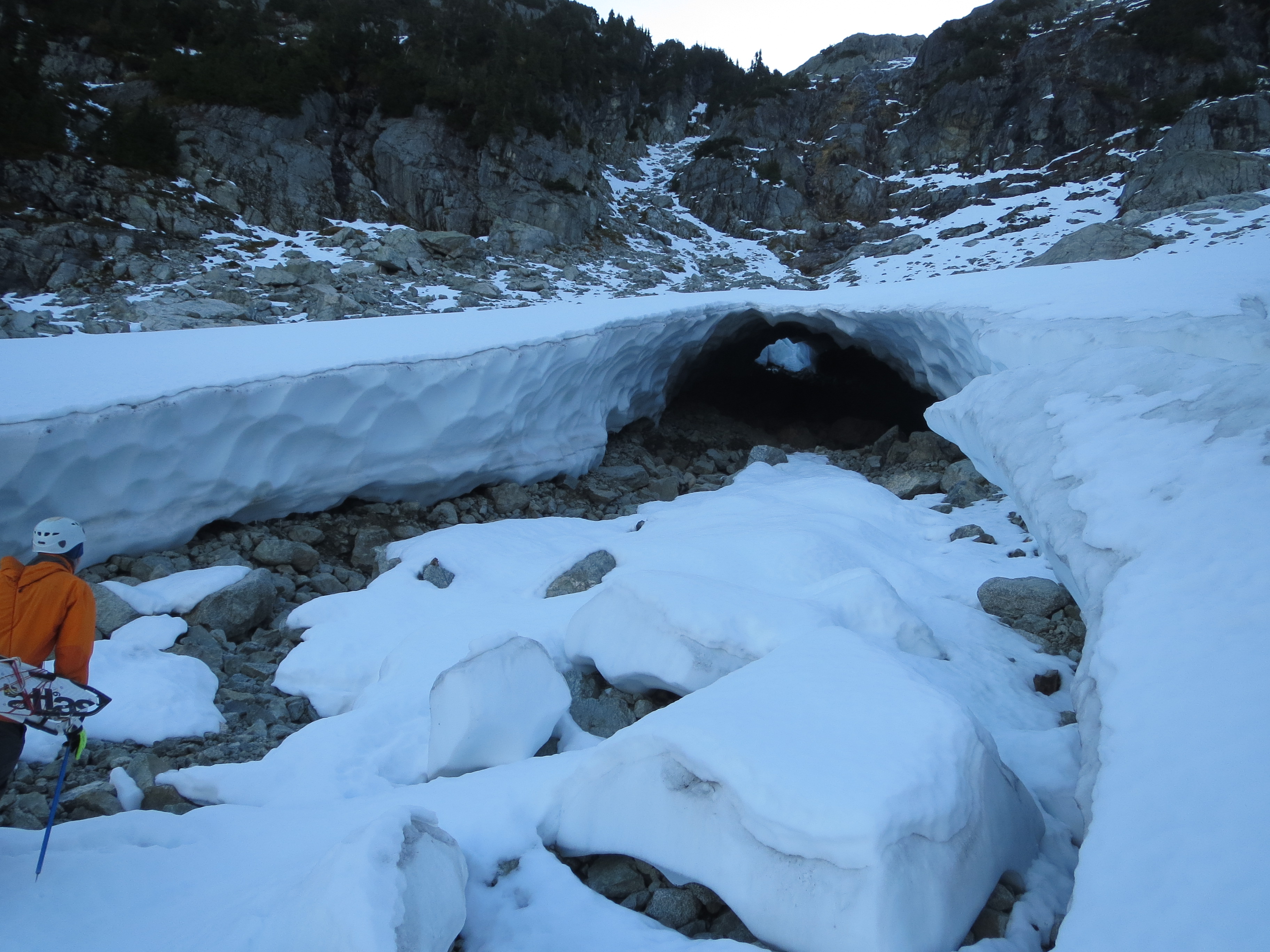 The first section to the base of the peak was steep and had a hard pack of snow. As we got higher the route became more mellow and soft, fresher snow covered the ground. 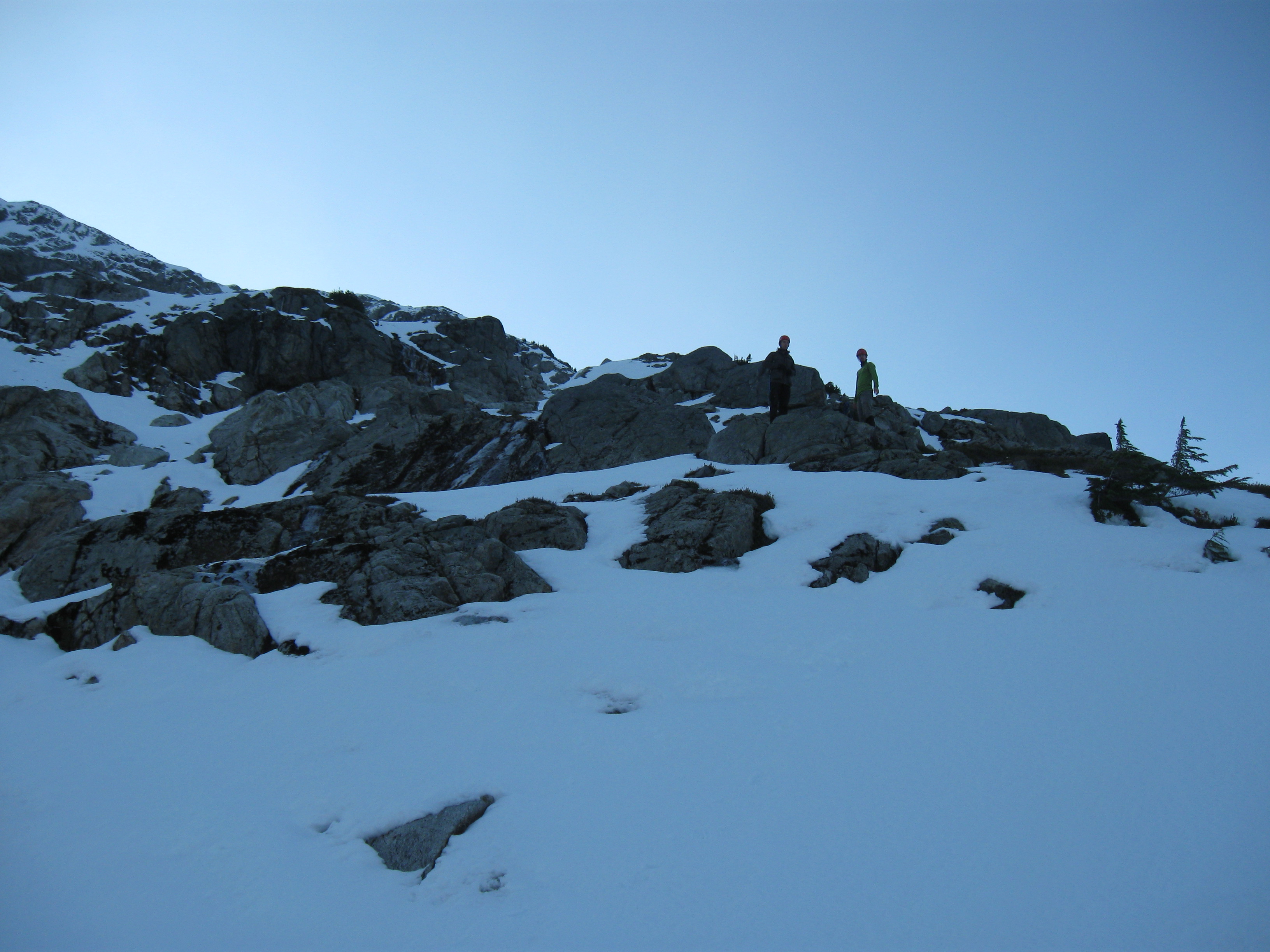 After about an hour and a half of climbing, we reached the plateau talked about in the scrambles book. We were rewarded with a glorious view of the famed Mt. Tantalus. 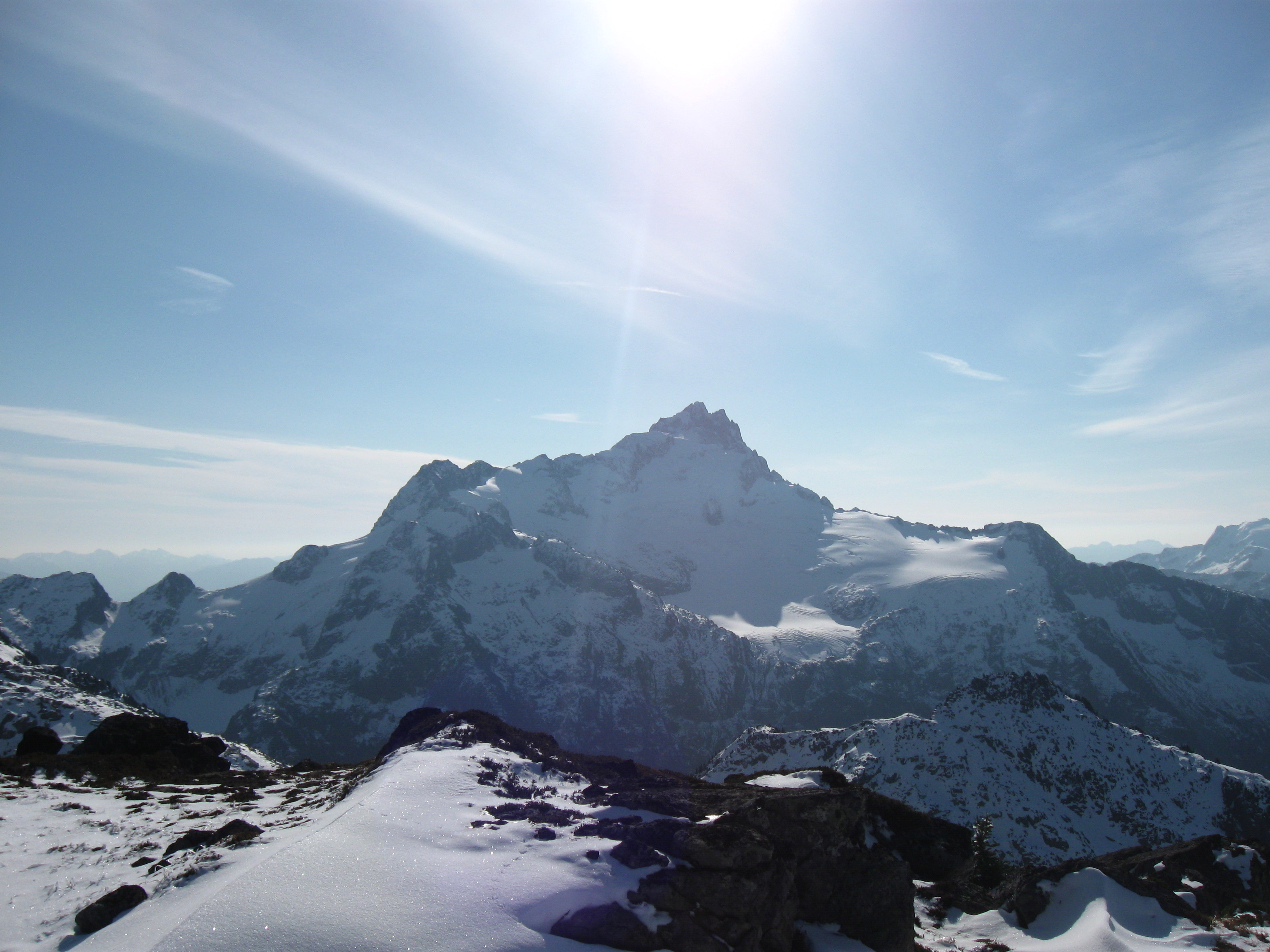 We took in the view, and enjoyed the sun while some contemplated the feasibility of the scramble in the current conditions. Fellow climbers (Amin and Dave) mentioned the route looked sketchy. 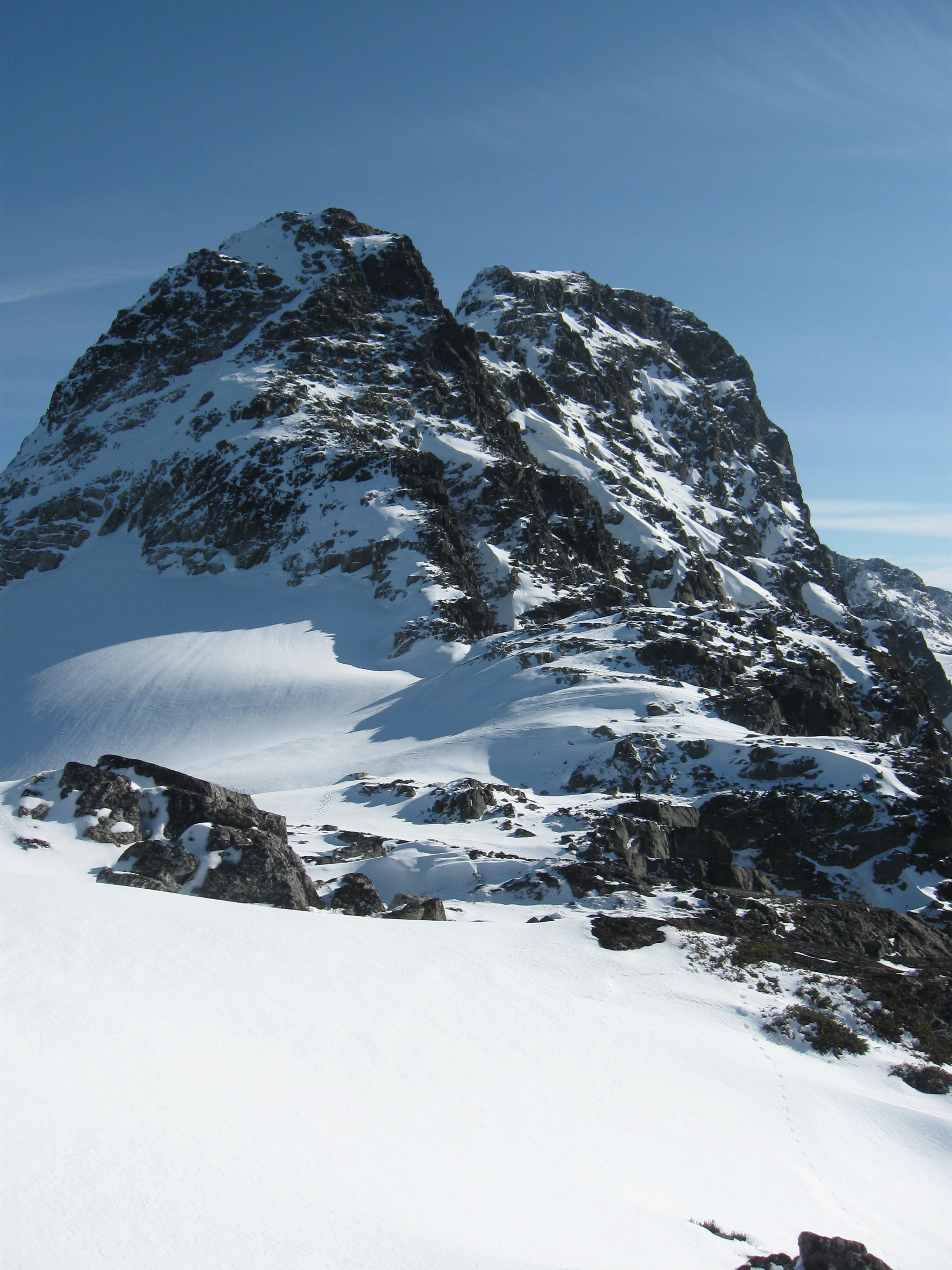 We approached the base to have a look, and Mirko, Joakim, and Marie decided they would give it a shot. Oops I almost forgot this awesome shot of Marie conquering the Tantalus range. 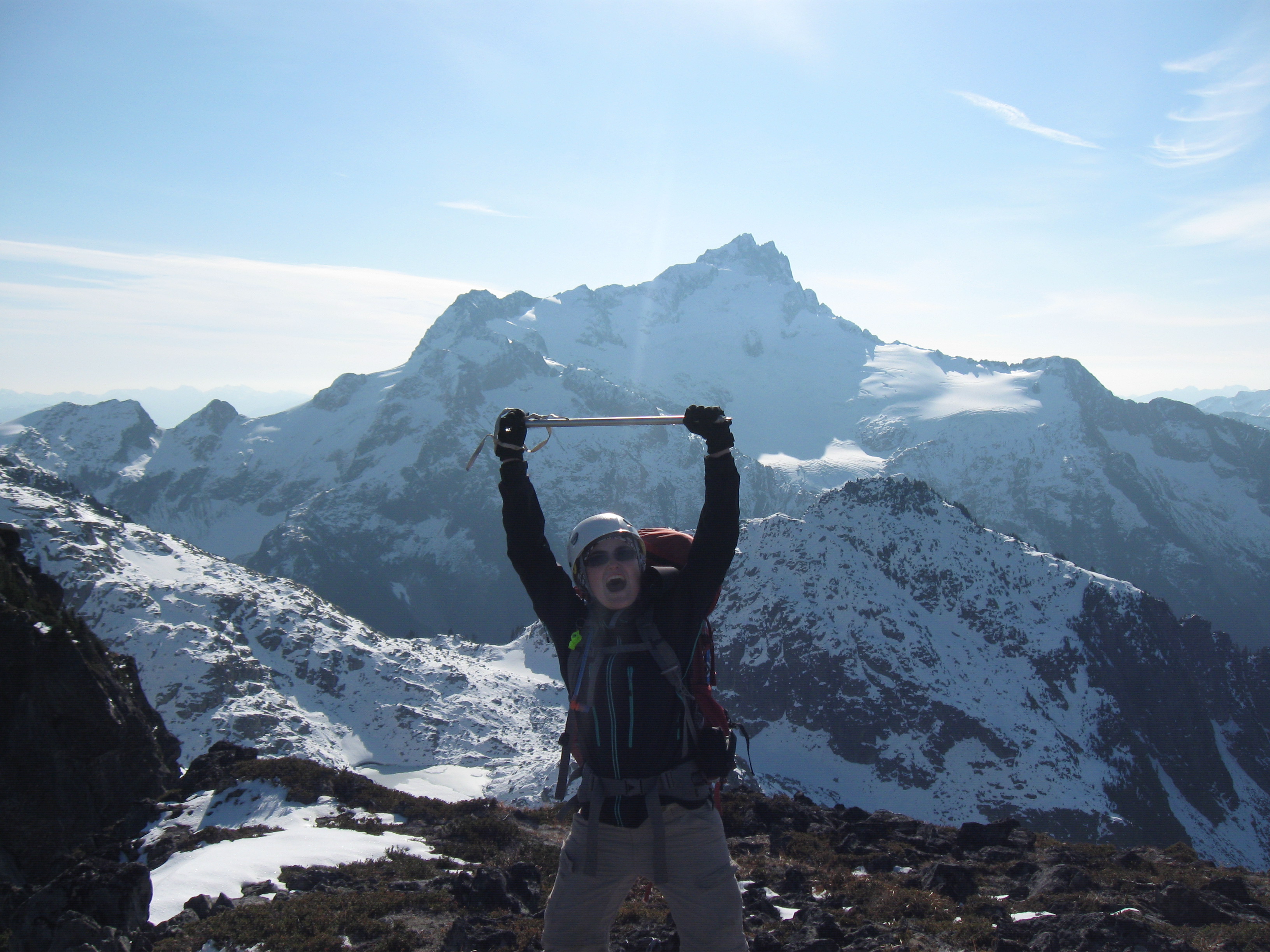 Anyways, myself and Ben stayed at the bottom while the three went on the scramble up the icy face of Ossa. They made it to the top in about 40 minutes! Mission accomplished to say the least. The scramble down looked treacherous.
We regrouped and made our way down to camp, where Jack and Anne were chilling. We ate a quick lunch, and started our head back. We had decided to try to make it back to the car to avoid another cold night. We ended up hiking through the dark for about 3 hours till 10:30. We got back to the car, headed straight for Timmy’s (for the full circle experience) and made our way back to Van.
All in all, a fantastic trip!
This entry was posted in Climb, Trip Reports and tagged Mid Group, mountaineering, Ossa Mountain, scrambling, Tantalus, Tantalus Provincial Park, Weekend. Bookmark the permalink.

One Response to Ossa Mountain Scramble