The VOC is turning 100 next year, as Archivist I thought it would be cool to revisit some old VOC Journals and archives to share some of the interesting stories and articles we’ve accumulated. I’m hoping to find stories which provide insight on the students who came before us and frame who we are today. TBT stands for “Throwback Thursday”, which is a thing (apparently) where you post pictures of yourself from ‘long ago’. I’m doing it as Throwback Tuesday. I’ll put up a TBT every fortnight. If you have a suggestion or request let me know.

For TBT1, I decided to go to the obvious start and post a story from the first edition of the VOC Journal by the then VOC president, Karl Ricker. Ricker also started the VOC journal in that year so it’s thanks to his initiative that we have so many stories archived and easily accessible.

For Sev Heiberg and myself, it was our third trip to Garibaldi and as we had climbed most of the peaks in the area, new peaks were sought. The word unusual in this sense refers to the fact that V.O.C seldom visits these peaks, if ever, to climb them. The peaks referred to are the peaks in the Granite Ridge of Sphinx and the Cheakumus glaciers — the Bookworms, Phylis’s Engine and Mt. Davidson.

The Bookworms (7910′) are three glacier nunataks rising 100′ to 200′ off the ice. Upon our first close-up view of the spires the sharp, pointed one in the middle took our fancy. Al­though a grade four climb, the rock was very solid and no serious troubles were encountered for our ascent. As the summit was very small, only one could stand on it at a time. The route was a layback along the southwest arrete to the summit. The next spire attacked was the most southwesterly of the three.

Although we circumnavigated the nunatak, the route we chose was on the southeast face as we had apparently missed an easier route found by Albert Nickull in a solo climb a few days later. Albert started from the col between the middle and the south­west spires and followed the northeast arrete more or less to the summit. Our route was up a chimney for fifty feet where it closed into an overhang. At this point, I traversed left on a very narrow ledge for fifteen feet and then gained the next ledge seven feet higher which was wide enough for a good belay point. This ledge was traversed to the right back into our original chimney and two more belays saw us out of the chimney from which a good scramble followed to the summit. A cairn was on the summit but no records could be found. The northeast of the three spires didn’t appear to be too difficult and as we expected, it proved to be a grade three climb to the summit by way of the south arrete with a deviation into the numerous gulleys on the southeast face. After our successes on the Bookworms, two other V.O.C. parties were also successful; one being Albert’s solo climb and a rope led by Gordie Blake.

A week later Sev, after his failure on Mt. Davidson in the previous year wanted another crack at this peak. Leaving the Q.C.A. cabin at 7:00 A.M. we made exceptionally good time to the ridge separating Sphinx and Cheakumus glaciers. The crossing took place just south of Phylis’ Engine but the Engine lay shrouded in clouds. Just before the run down the Cheakumus glacier, the Engine came into full view, momentarily showing off the steep granite sides with its many vertical cracks. As Mt. Davidson has only been climbed twice, we elected to stick with our task. The route was a scramble up the southwest ridge to the southwest summit which is lower than the northeast by some ten to fifteen feet. Separating us from our goal was a fifty foot gash in the ridge with lots of exposure. We immediately roped up! The route was one of two choices – over the six to eight foot gendarmes beyond the gash to the summit, or descend to a series of ledges below the gash and traverse to immediately below the summit block. The latter was used by Derek Fabian in 1957, but the gendarme route looked by far the most interesting, so after a series of good small rock climbs up and down the gendarmes, we gained the summit at noon. Since the weather was cold and windy, we added a few stones to the cairn built by Neil Carter and company in their first ascent of the peak, and left by the same route.

Upon return, the most southern tower of Phylis” Engine took our fancy and as it was only one p.m. we decided to give it a try. Our first route was up the east face by way of the vertical cracks which we hoped to be the summit. At the base of the tower Sev stepped onto the rock and tried the vertical crack. At a point thirty feet above the steep slope trouble was encountered as the crack sloped against us to form an overhang with what looked to be a grade five to six climb above. After a short discussion we thought a better route might be found on the west face. The west face looked much more feasible and eventually after a series of ledges, each being connected by a vertical crack of moderate to great difficulty, we were standing on a knife edge between our tower and a gendarme just north of us. The vertical cracks had sapped our strength and verglas in the cracks had not helped matters any. It was no wonder our ambition faltered here – being only 255-30* vertical feet from the summit. The final thirty feet would require pitons for direct aid with a pendulum traverse and as the time was 3:30 p.m., a unanimous vote saw us retreat. As the lake was thought to be too soft for a safe crossing, we went home the long, hard way – traversed to base of Castle Towers, to Polonomum Ridge, contoured round to Gentian Pass, contoured on to the side of Gentian Peak to Helm glacier, downhill run to Black Tusk meadows and a short, but not so soft crossing of the lake to the cabin. We were pooped; at 7:00 p.m. Mary Ann Duncan and Barb Jagger fed us like kings. Although Phylis’ Engine got the best of us, our next visit to the park will see us, once again, trying those spectacularly steep crags. 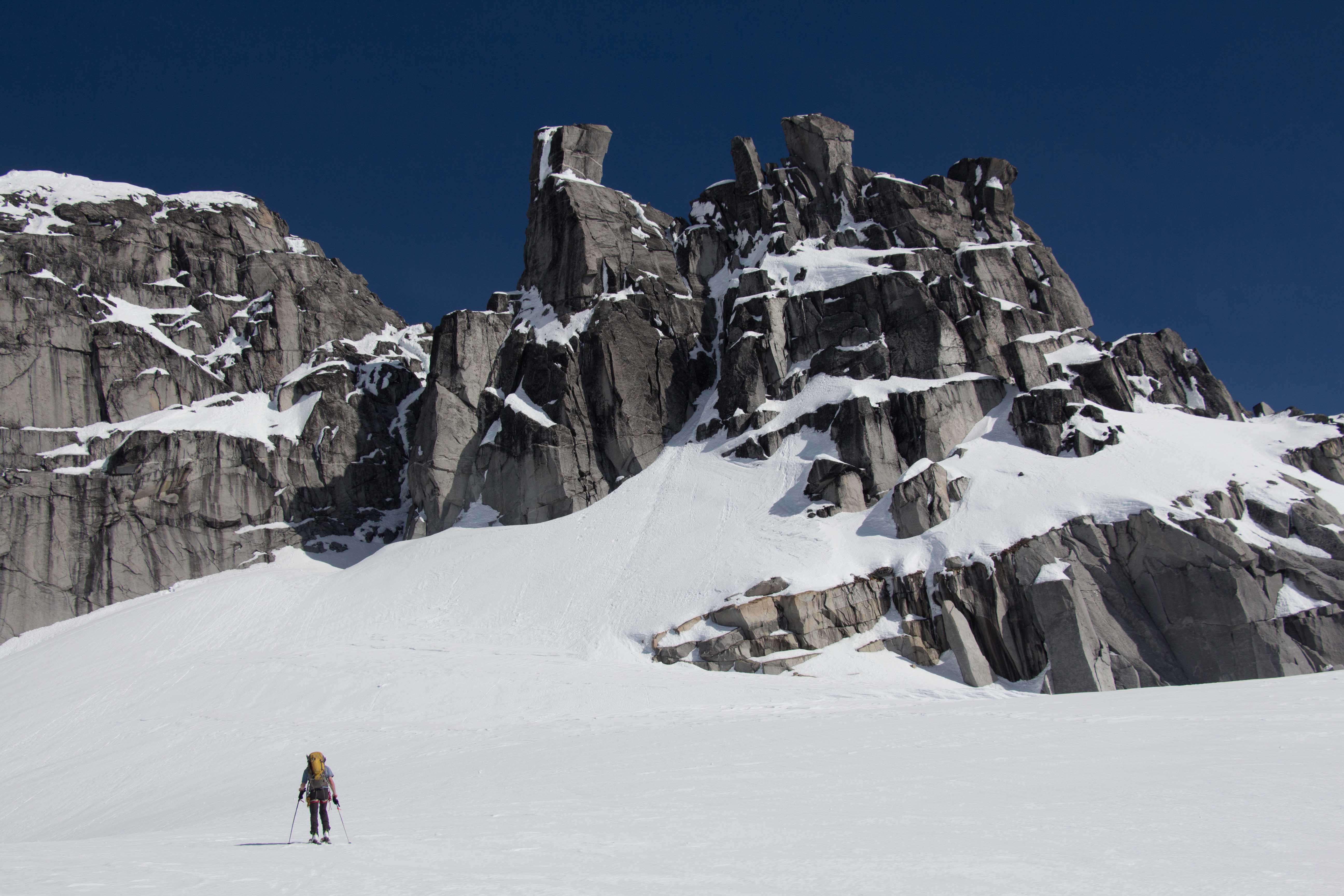