Trip report for the first installment of VOC’s very own Mountain Tinder.

By: Kevin Burton and Luka Culbrk

We had our pre-trip meeting at a pub, which worked really well as a location for our first date – note to self… We had lots of guidebooks and created plenty of stoke for the plan: The four of us would casually hike up Friday, climbing Fissile Saturday, then either doing another route up Fissile, or if it ended up being way too easy trying Fitzsimmons or something else on Sunday.

Logistics were discussed, since I was the most beginner of the four of us, I decided to ask lots of questions like: What should I bring? Will there be bears? After last weekend of hauling firewood up at Brew, I knew what to expect. It was going to be really hot, and full of mosquitos, so it was pretty easy to pack accordingly. Just bring the exact same stuff as last weekend, but extra protection in the form of a heavier sleeping bag, ice ace, harness, and crampons. No problem!

The plan was to meet at a predetermined location for Artem to pick us up at 6:45am sharp. Unfortunately due to Canada Day, we had to reschedule it to 8. No biggie.

Everyone met at the predetermined location at 8…sh. I forgot my contact lens solution at home, so ran to buy some more from somewhere that wasn’t closed for Canada Day, while another party member was doing bus faff.

We had a great drive to Whistler, accompanied by a stop in Squamish to sing O Canada, for free coffee. Then another stop in Squamish because I forgot my socks on my desk where I was supposed to remember them.  Also just after Squamish it started to rain, then rain really hard as we approached Whistler. Others were discussing hiking in the rain, while I regretted not bringing my waterproof pants. It was supposed to be super sunny anyways, just like last weekend. Luckily when we finally found a parking spot, it stopped raining right away! First little bit of luck, and a big morale boost. 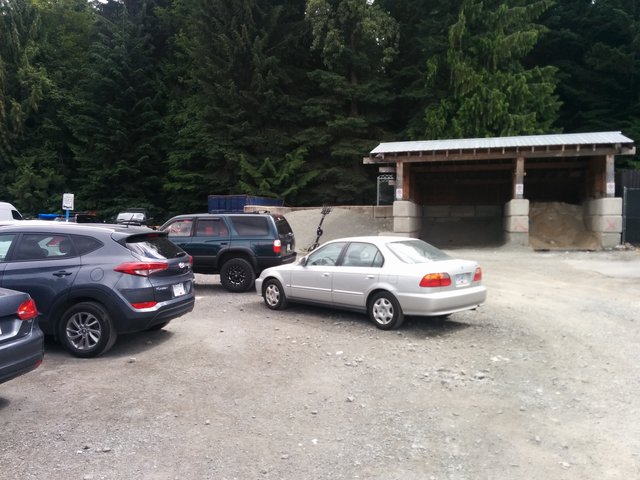 Artem’s shitty parking job. Photo: Kevin Burton (To be fair, this is after 3 days of the cars moving around us and conspiring to make me look like an asshole)

The trail was pretty steep, but certainly manageable, even with all our gear which included two ice axes each and crampons. Oh yeah, and the harness, of course. After about 40 minutes, someone decided to ask which way to go at a fork, so Artem whipped out his GPS and declared us to be about 30 minutes off route. Again not a problem, after all we saw another family do the same thing while we were on our way down. Totally Whistler’s fault, there needs to be better signage! We continued hiking up the also very nice real trail, starting around noon, stopping for a late lunch. While packing up, I noticed someone putting away their helmet.

“Wait a second.. This might be a really dumb question, but was I supposed to bring a helmet?”

I was ready to walk back to town, which was only about 3k away, but instead we then called most of the gear shops in town, with the consensus being that you cannot rent climbing helmets for liability reasons. Eventually I decided to just hang out around the lake Saturday, while the other climbed Fissile.

Looks like our foursome is thinned down to just three for the summit day. Morale slightly reduced, but I figured if I didn’t know to bring a helmet, I’d probably have a hard time on the route, so it was all good.

The rest of the trail went really well, with a couple interesting river crossings. We had a really relaxed pace, and made it to the hut with plenty of sunlight left. 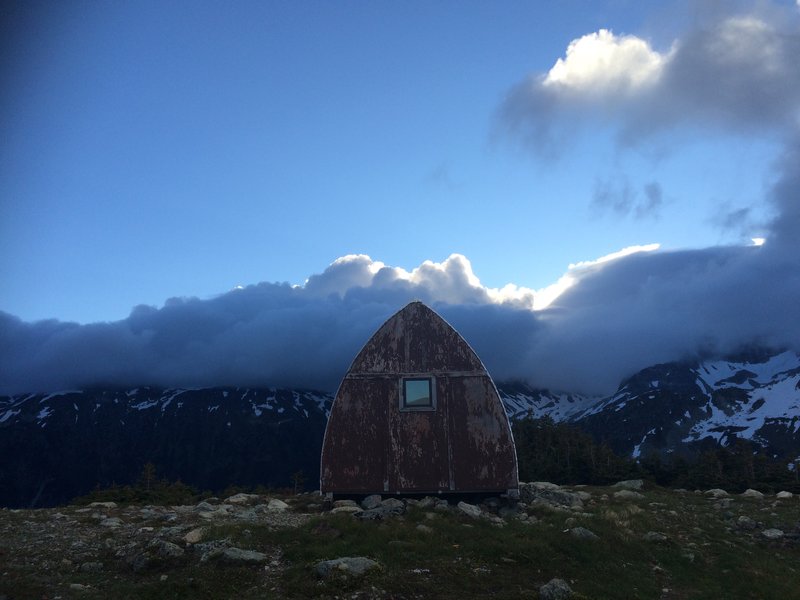 We awoke at 4 in the morning, groggy but ready to ascend the gigantic pinnacle looming over the hut. After forcing down as much porridge-butter as I possibly could, gear faff began. We wound up heading out at 5:30am, a full hour and a half after we woke up. As it would turn out, this wasn’t the best…

After a brief 15 or so minutes getting roped up and ready to go, we began slogging up the 35 degree snow up to the couloir. Temperatures hadn’t quite dropped low enough for the snow to re-freeze, so it was fairly firm but our feet still sank in slightly and allowed us to thrust long and deep steps into the snow. After some time, we reached the couloir proper and the snow steepened to 40-45 degrees and we began using the ice tools we had hauled. While they weren’t completely necessary, they were nice to have and also it felt pretty cool to be using a second ice axe for the first time in my life. Most of the time we simply climbed without bothering to unrope because we all felt super solid in the snow, our feet were kicking buckets easily and the angle was reasonable enough that we felt fine. About two-thirds of the way up we grouped up for a brief water/snack break, whereupon some boulders dislodged from an island of rock in the couloir, launching microwave-sized chunks of fissile crap-choss directly across the width of the couloir underneath us, where we had been 10 minutes prior. Oh dear, the sun was starting to melt rocks

We quickly descended onto the choss-stained snow below the mountain slopes and hurriedly traversed to somewhere where the snow wasn’t too brown. We hadn’t quite entered that stage of our mountaineering careers yet 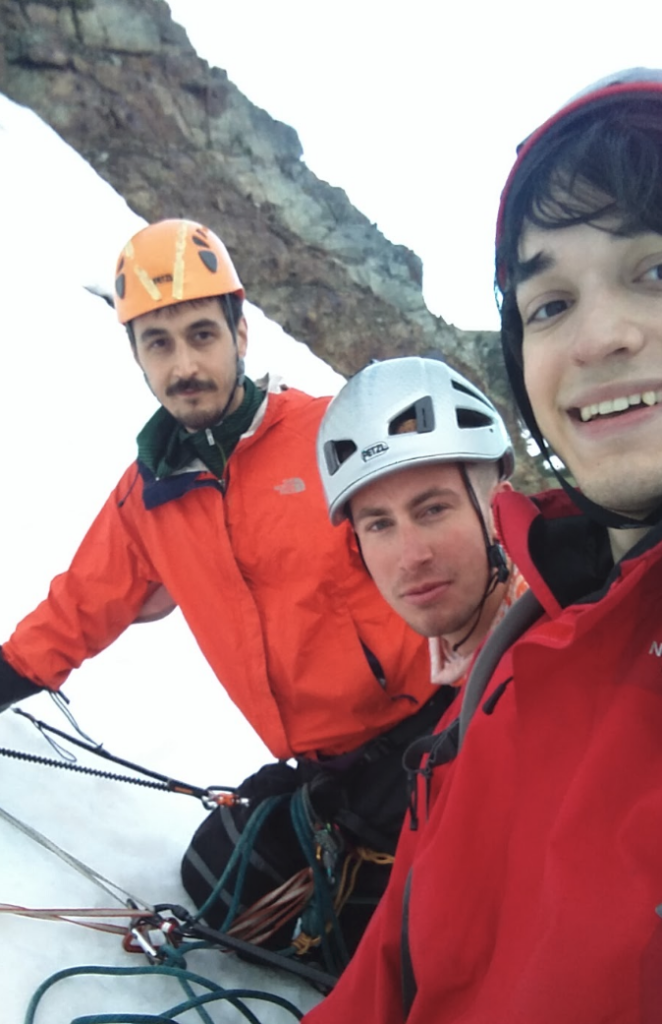 Having a blast. Photo: Luka Culbrk 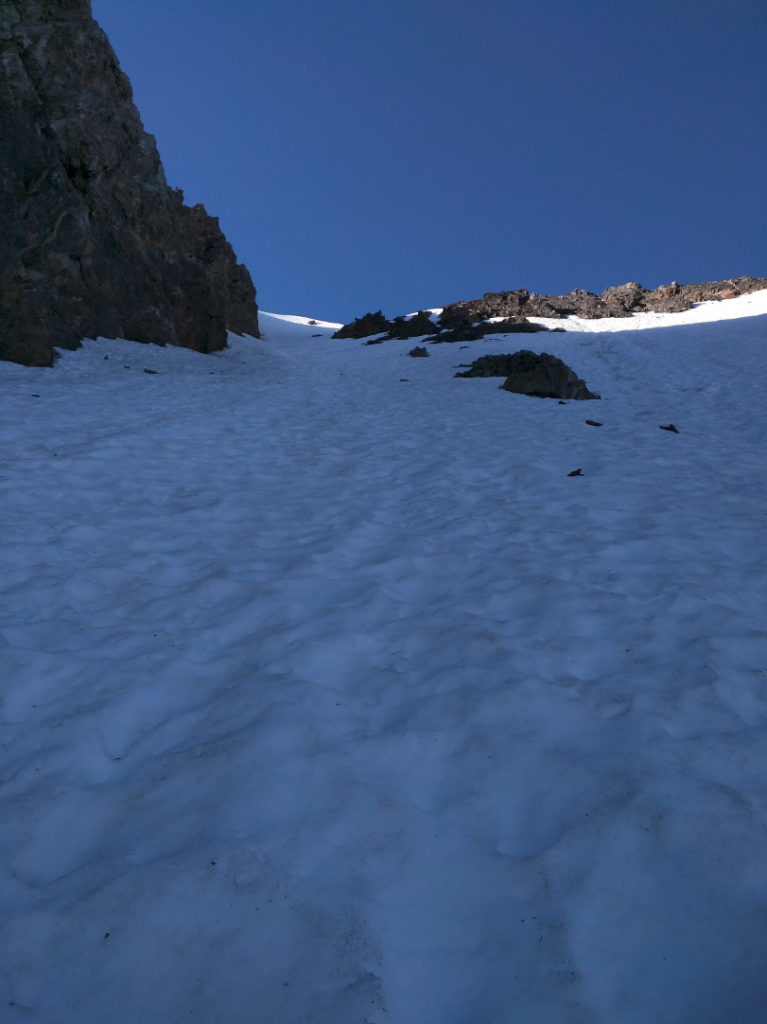 Up the slope. Photo: Luka Culibrk

We continued in haste, and I took the lead. I quickly found a good rhythm, and I was absorbed in the simple pattern of kick, kick, axe, kick, kick, axe, punctuated by occasionally putting a picket into the snow and us grouping up to collect the pickets and continue. With the sun rising, the mountains around us were bathed in sunlight and we were having the time of our lives. Soon, we were just below the top of the couloir, and I learned an extremely valuable lesson…

It seemed like we were only three rope-lengths from the top. I reasoned that I could push to the top, placing all three pickets along the way instead of saving one to anchor to while the others were coming up to bring me the rest. I climbed as high as I could while protected by a picket, although the top was still out of reach and the slope was easily 45 degrees or more and in the sun, so it was getting slushy. I dug out a seat to hip belay the others up, but after putting my axes into the snow and sitting down I realized I didn’t leave enough space for my backpack, so I started getting out of my seat. Turns out, crampons don’t grip that well when you’re facing away from the slope, and I started going for a slide. A brief glimpse into my thoughts:

“Wait, is this happening”

“I put my axes into the snow, I never practiced for this!”

Sidenote: Turns out both my axes stayed in the snow and were being dragged along as I slid, slowing me down significantly.

After this, I quickly stepped back up to the seat and dug out a very deep seat, and I belayed the others up, who took over the lead and we soon found ourselves at the top of the ridge. The lesson here was that no matter how close the top is, it’s best not to take a risk when the consequence is finding yourself deep on a slope without using any protection 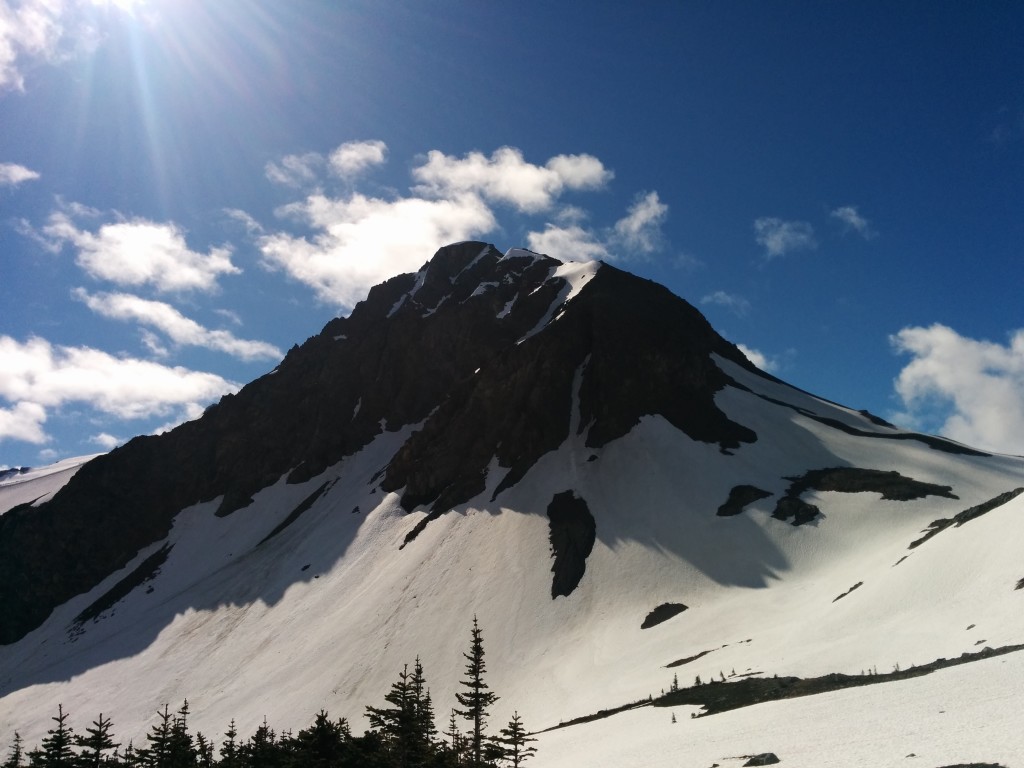 View from the hut. Can you spot the 3 climbers? Photo: Kevin Burton

From the top of the couloir, the summit was a matter of scrambling along a conveyor belt of fissile crap-choss to reach the summit at 11am. We stayed up there for about 10-15 minutes and had a bite to eat. Afterward we checked the GPS to try and find the descent route, which we weren’t totally sure of. The west ridge would be a western…ridge. However the only western ridge we saw was the ridge we topped out on, which didn’t seem too right. After descending the summit we decided on heading down what appeared to simply be a long scree slope.

By now you may have guessed what “50 shades of choss” was referring to. No, it wasn’t the ascent convener belt of choss, but this part. 400 vertical meters of the steepest, loosest, crappiest choss any of ushave ever been on. You’d take one step, and the choss would slide you down another three steps. After an agonizing period of time that I don’t quite recall the length of, we arrived at a snow slope, whereupon a delightful glissade and short walk brought us back to the hut.

After relaxing in the hut and having a long lunch, we met a couple doing a day hike up from the gondola. Pleasantries were exchanged

“Wow can you guys believe no one else is up here?” “Yeah, we had the hut all to ourselves last night.”

Along with pleasantries, they brought us a new weather report. Rain tomorrow.

We also did a glacier skills refresher, which went really well. I learned things like the importance of bringing gloves and waterproof pants, as well as what pulleys and ice axes are for.

We woke up late to nice weather, but fear it was going to get worse stopped us from doing Whirlwind. We decided to have a long breakfast and head down instead.

Thanks guys for the excellent trip! 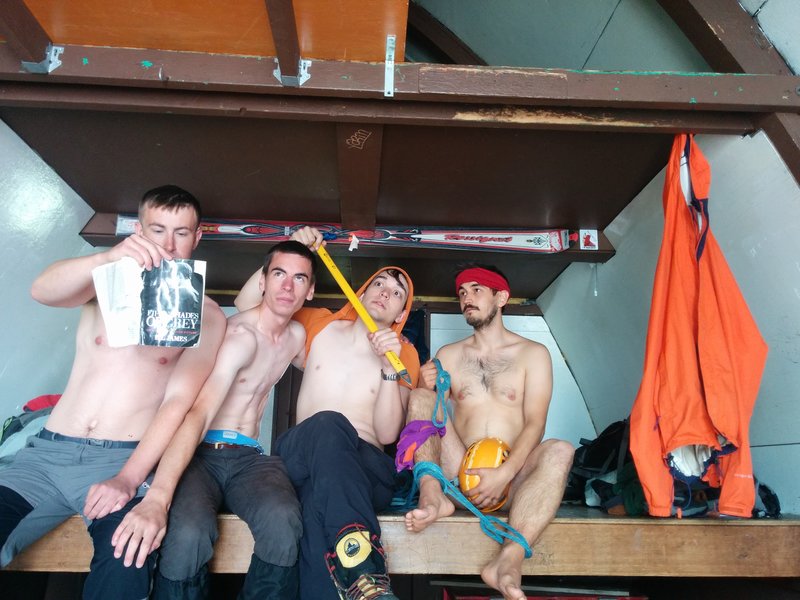 We tried to keep the trip as thematic as possible, and I think we did an excellent job overall. Photo: Kevin Burton 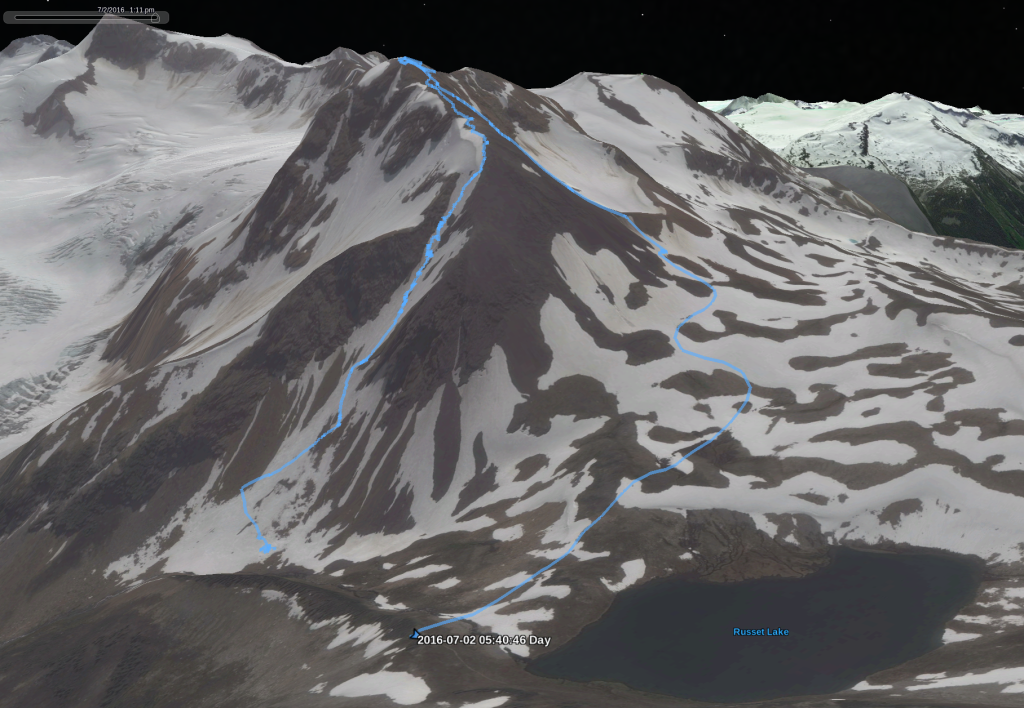 Our GPS track up Fissile.

4 Responses to 50 Shades of Choss