New Routes and First Ascents in the Ossa Region

Artem and I had agreed to get out for an adventure the weekend of August 13-14, 2016, and I had been eyeing the unclimbed Ossa pinnacle for some time. We agreed to give it a go. While researching the objective, it appeared to me that the Northwest Buttress of Ossa was also unclimbed, and I figured why not try for *two* first ascents in a weekend? Artem was easily convinced.

Artem left Vancouver only 20 minutes behind schedule at 3:50 AM, picking me up in Squamish at 5:00 am. We gassed up, got Timmies breakfast, and headed to the Sigurd Trailhead. We left the trailhead at 6:30 and were at the moraine by 9:30 thanks to the awesome and efficient new BCMC Trail. We hiked up the moraine to get a look at the North Ridge. The “main” plan had been to circumnavigate the glacier on its east flank, then drop into the basin by the toe of the NE ridge, then gain the North Buttress from the basin. Looking at it from the moraine, it looked like we had a couple options by which we could directly gain the buttress from the bottom and skip the glacier; adding 400m of technical vert to the route. This seemed like fun so away we went.

Similar to Rennie and Serl’s experience on Reaction Time (much higher up), the main problem was getting across the ~3m wide moat. This took us 1.5 hours (from 11:00-12:30). Artem had to lower me down overhanging snow onto a dodgy bridge, after which I jumped across and scrambled up to build an anchor. Artem then built a bollard to redirect the rope and I lowered him down. With no evident way to backtrack over the bergshrund we were now committed! 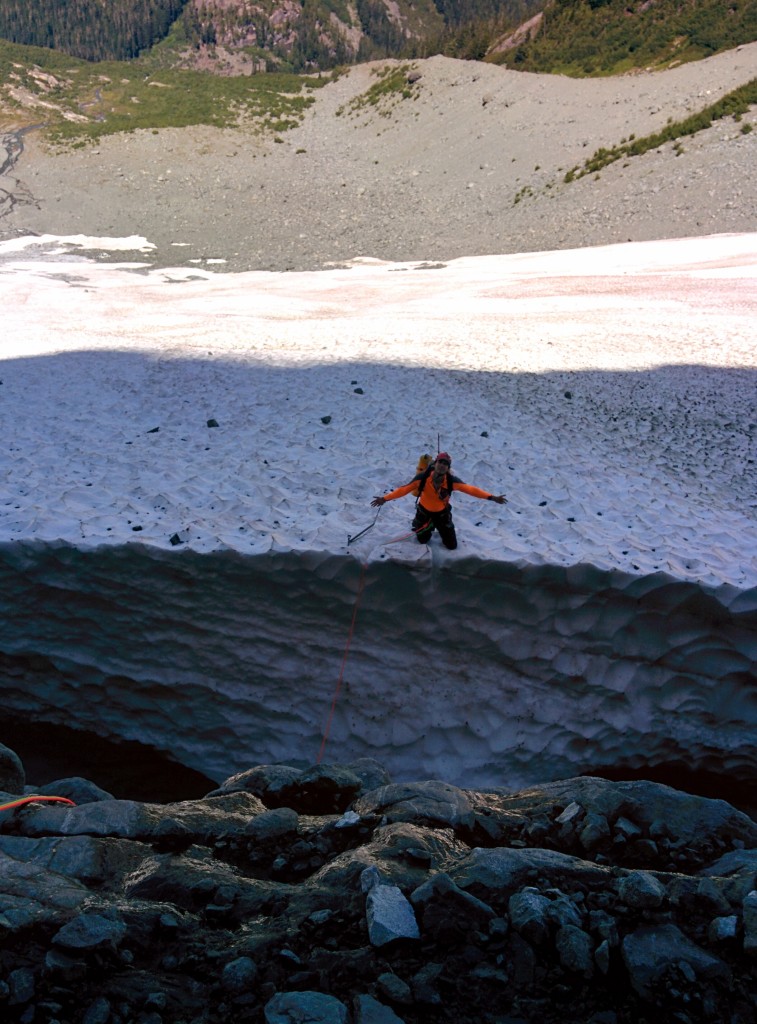 Artem gets ready to cross the moat on his bollard.

I lead a first pitch of run-out but easy (5.7) climbing on very good, compact rock. I only got in two tricams, a cam, and a dodgy ballnut in 60 m. After Artem followed me up we decided to scramble up 4th class slabs to the snow below the icefall. We went up the snow patch and turned right at a waterfall right below the icefall, scrambling up the waterfall was fun with a few tricky moves and a bit of slippery wet rock to gain the middle snow slope at ~1770 m. We crossed this one successfully as well, but both of the snow slopes in this section were tricky to get off of due to moats at the upper edge – not nearly as bad as the first one though!

We roped up again for two pitches of 5.7 climbing that followed a crack just left of the deep groove visible from the distance. The climbing was made harder on the first pitch by boots and overnight packs, and required excavating a bit of moss to find pro, but generally went very well on featured, sound rock. After these two pitches we scrambled onward over 3rd class rock and two more snow slopes to intersect the West Ridge, easily scrambled through the notch problem, and walked onto the summit. We arrived on the summit shortly after 7:00pm and decided that even with over an hour of light left it would make a fine place to bivy. 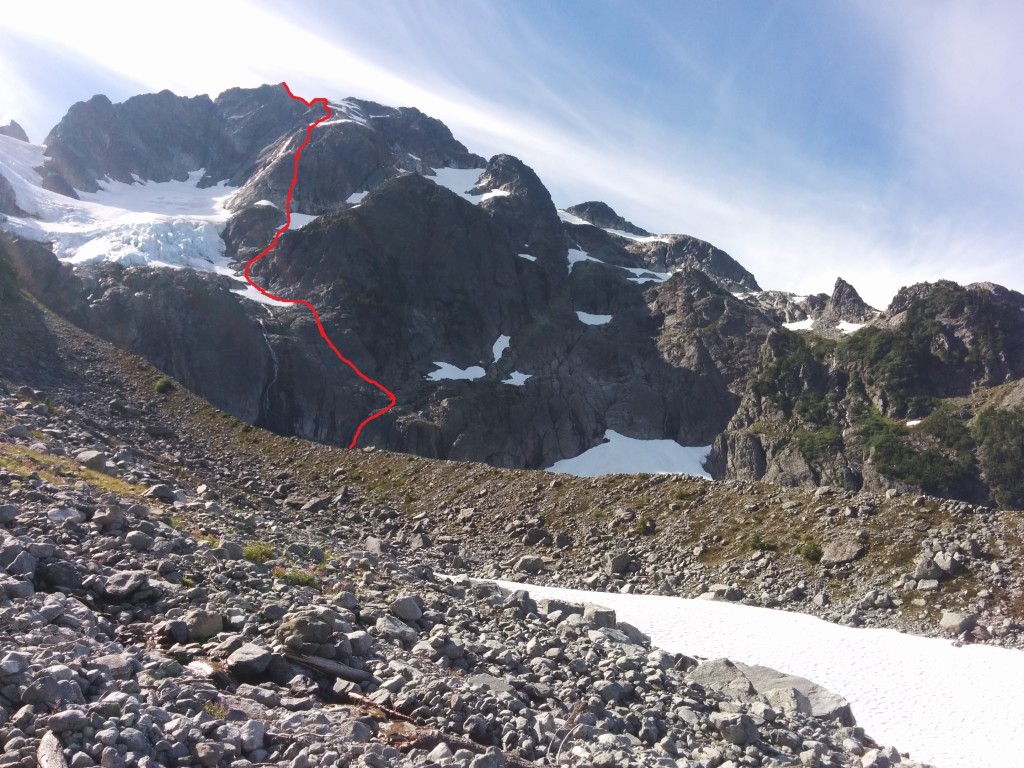 Our route up the North Buttress 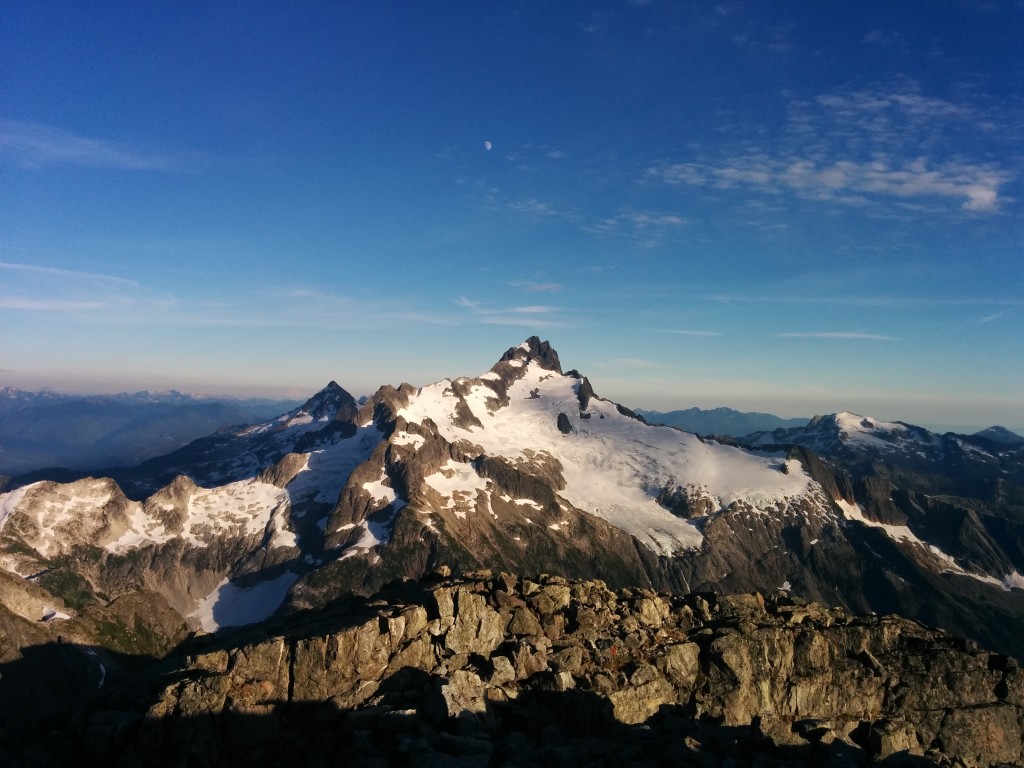 Gorgeous view of Tantalus’ North Face from the summit of Ossa

We enjoyed gorgeous views in every direction while I built myself a small wind wall and then cooked dinner. Night fell as we were eating dinner and we were treated to a great lightning show from a large thunderstorm in the Stein/Duffey area. The Perseid meteor shower was supposed to be just wrapping up but we were too tired to spend much time watching for it and soon were trying to sleep. I say “trying” because we’d both made the terrible decision to forgo real sleeping bags in the interest of saving weight. I had an overbag and Artem used the rope plus an emergency blanket. Both of us were chilly in the night but still managed to sleep some, especially in the morning when we somehow slept in until 8:00am!

After breakfast on August 14 we rapped down into the notch between the main summit and the “East Peak”. A short pitch of low-5th took us out of the notch, after which we easily down-scrambled the 3rd class East Ridge to snow. We got out crampons and used pickets to protect a simulclimb along the snow to the base of the Ossa Pinnacle; the East Face below was all steep blue ice that would be impossible to arrest on. After reaching the pinnacle we ate and ditched our packs. Artem lead the first 50 m pitch up the West Ridge on 5.7 blocky terrain – mostly good rock but definitely some large loose pieces. I took the glory pitch of the final 30 m scramble to reach the summit block at 12:30pm. Wahoo!!! An actual First Ascent of something pointy!! 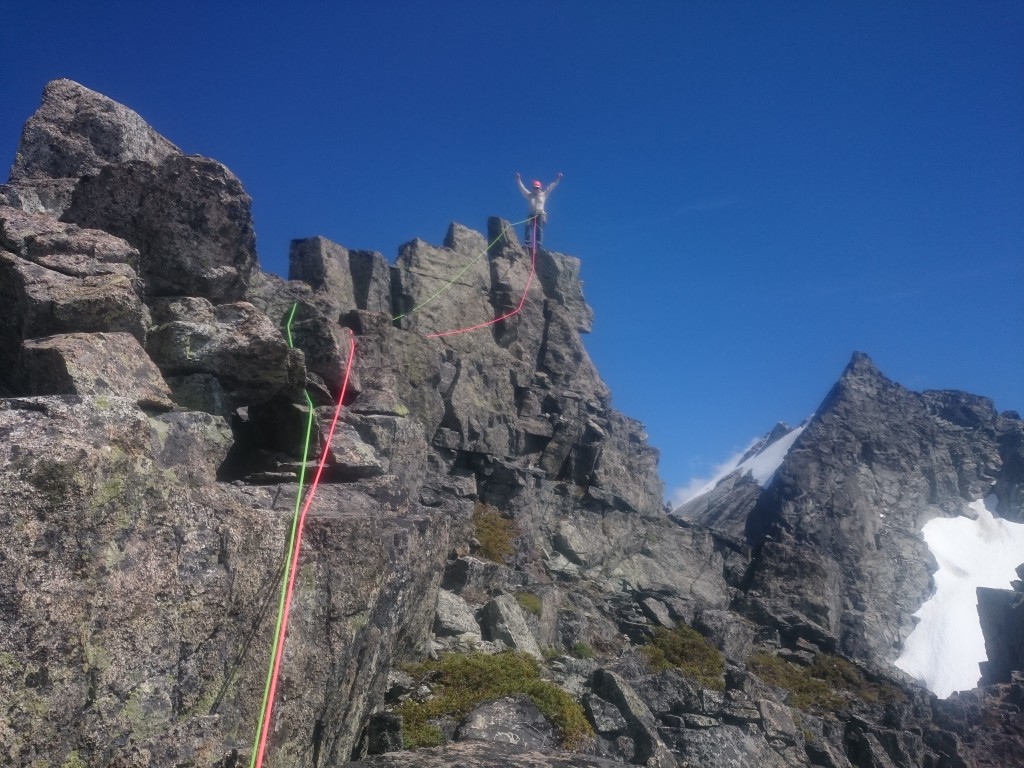 Nick on the summit block of the Ossa Pinnacle 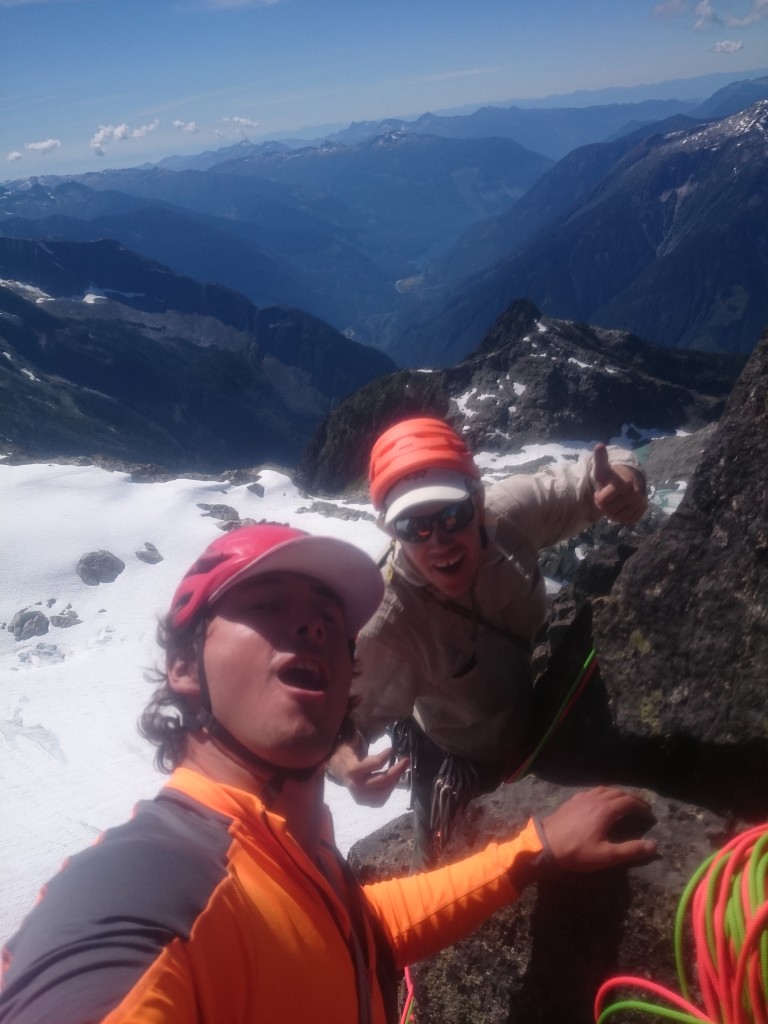 Stoke is high after Artem joined me on the summit after a first ascent!

We left a pin on the summit to lead back to the top of the first pitch, then rapped off back to the base and our packs. We ate more, rapped again off a snow bollard down to a rock step below. We found a great horn and used a short leftover tail of tat to sling it. The next rap was a 60-m rope-stretcher down a wet slimy waterfall to the snow. I couldn’t believe our luck and how easily it was going, which is probably why Karma chose that moment to reach out and smack us. After Artem rapped he pulled the red rope, and it was good and truly stuck! We tried pulling and flicking it every which way but it refused to budge an inch. We played rock paper scissors to see who would go back up – I won. Artem disappointedly racked up and started climbing back up along the ropes, with prussiks for pro and occasional aid.

I went down to watch Artem from a sunny spot, since it was a slow process. It took Artem just over an hour to worm his way back up the wet slimy waterfall. Once at the top he determined that we had simply made a really dumb rookie mistake – we were supposed to pull green! The first yank on red got the knot wedged into the tat, which was tighter than normal since we were using the end of a roll). Artem added a maillon to the tat to be sure of an easy pull this time and rapped back down. We successfully pulled the rope and were back on en route after a 1.5 hour setback. While waiting for Artem I admired the crack systems on the face of the pinnacle we had just climbed and its shorter sibling. There are some great lines there on solid-looking rock for someone who brings rock shoes and good pro. 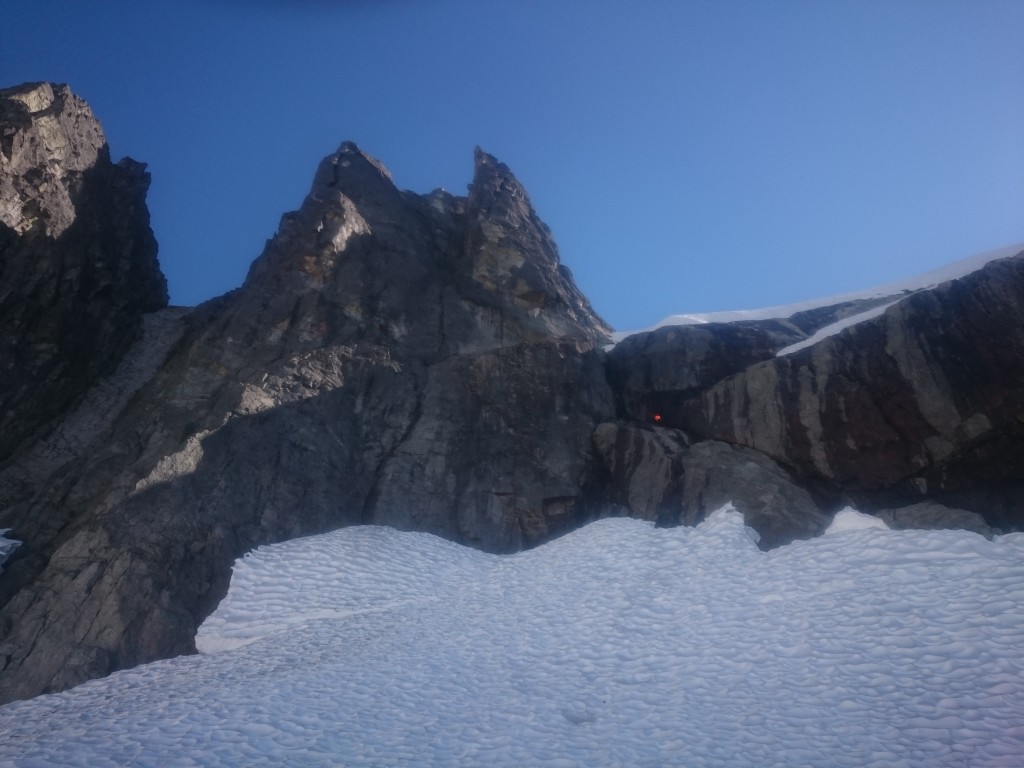 The pinnacle as seen from the base, while Artem prussiks up a waterfall on the lower right.

We roped up and easily walked down the glacier around some large crevasses. Then a bit of tricky down scrambling down the skier’s right hand side of the slabs brought us back to the moraine by 7:30 pm. It took us 4 hours from there to get back to the car, and we had it in the bag! The kitchen at the shady tree was closed so we just celebrated with a beer before headed home and to bed.

The weather was stellar all weekend – bluebird skies, warm, and sometimes too hot on the snow. There was plentiful water all the way up the North Buttress of Ossa, which was really nice in the heat even though the water came with a large side order of bugs. We brought pins, nuts, tricams, and three cams, but only really needed the nuts and tricams. Pickets and crampons were essential for the descent off the east ridge, but overall I thought it was a very nice route to descend instead of taking the West Ridge and the long way around the mountain. We both had great fun and were pleasantly surprised by how smoothly the trip went, even including the rap-pulling-fail.

I’m fairly sure the pinnacle was a real first ascent. The barometer showed a summit elevation of 2112 m and a prominence of 58 m above the col with Ossa. I’m a bit more hesitant to claim the north buttress of Ossa as a first ascent since others have climbed/scrambled similar routes with vague descriptions, but reading the descriptions I think it too was a first. In any case it’s a very nice route and is definitely the most direct route up Ossa with ~800 m of steep climbing/scrambling; the longest such route on the north side of the mountain. 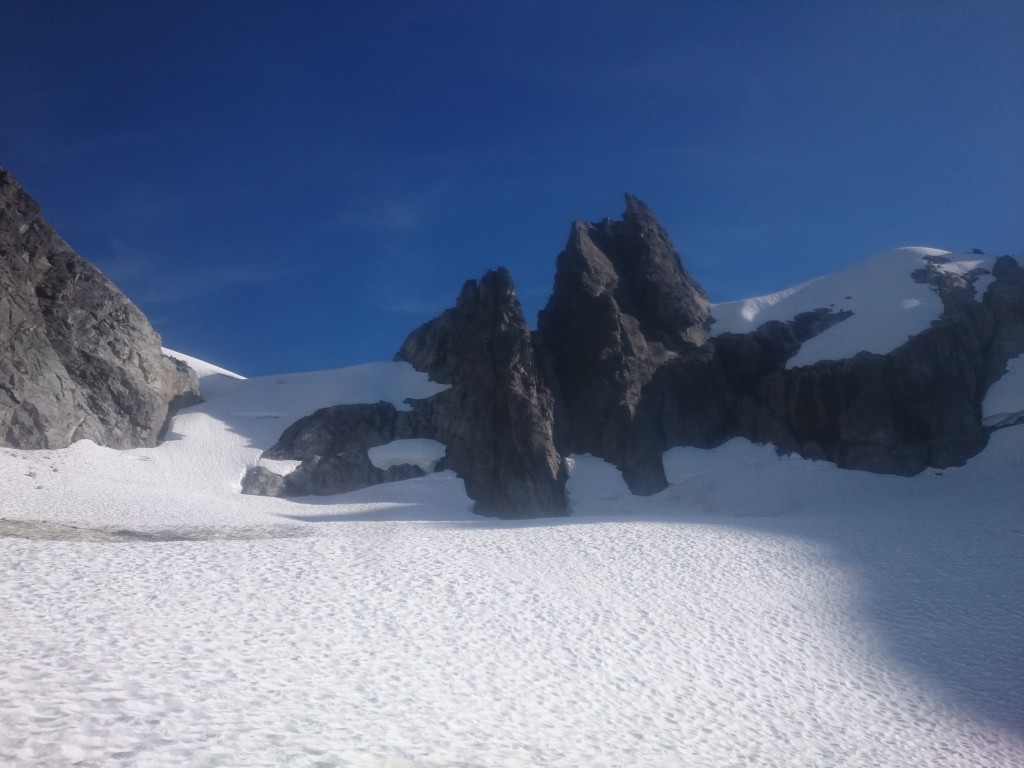 Looking back at the pinnacles after a successful First Ascent 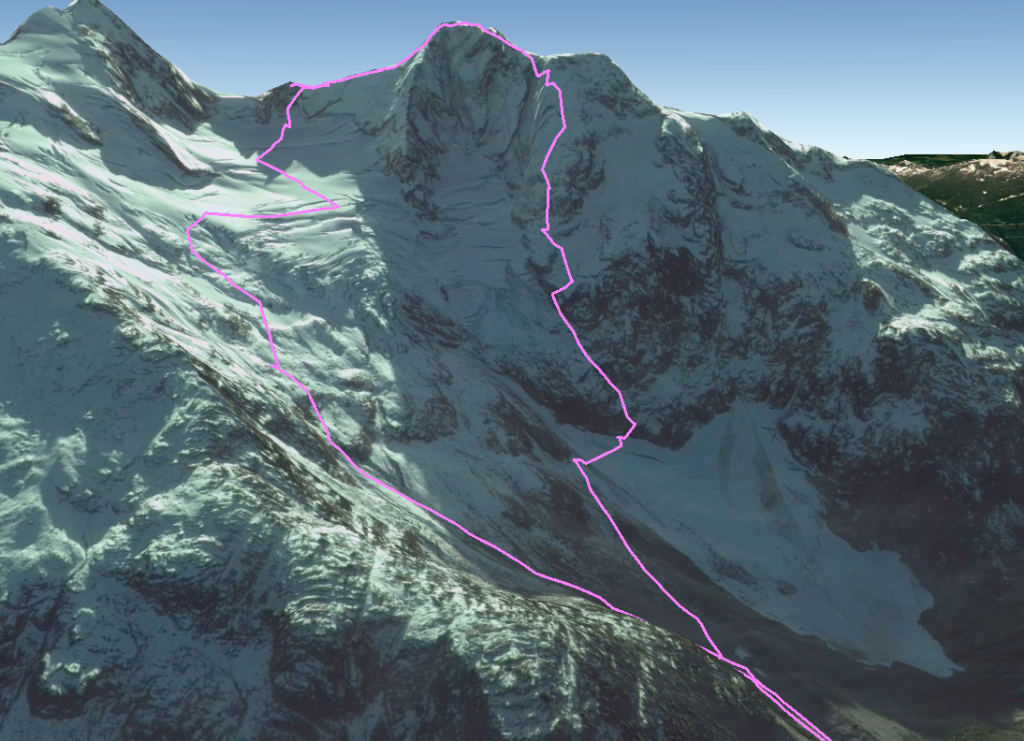 GPS track of the technical route