Kenai’s Big Weekend at the Brew!!!

Hi my name’s Kenai, I’m 3 ½ years old and this is the story of my weekend at Brew.   I woke up on Saturday morning, looking forward to a day of relaxing and maybe going for a walk, but my human, Denny, had other plans for us. I was so rushed in the morning that I didn’t even have time to pack. Thankfully Denny had my bowl and kibble, she’s pretty awesome at remembering stuff. I got in a stranger’s car but they smelled okay so I just went with it (they and the rest of the people would get stinker as the weekend went on). We started driving somewhere, I had no clue where but I was pretty sure it was somewhere fun. After driving for about an hour my new so-called friends left me in the car and went to a place called Tim Horton’s which smelled delicious, but they didn’t get me sh*t, I was not pleased. They met up with all the rest of the people who were going to come on the trip with us; there were about 25 of them but no other dogs. After we drove for another twenty minutes we ended up in a mountainy area; I was getting antsy in the car and was so stoked to see the trail. After driving up a ridiculously bumpy road, that made me glad I hadn’t had anything at Tim Horton’s, we were finally ready to get out and start hiking. It was raining outside which made the people unhappy for some reason, but I barely even noticed. After I peed on a bush to mark the beginning of our journey and barked at everybody to get ready we eventually started walking up the mountain and man were these humans slow. The way up was long, mostly because I had to wait for the people who fell all over the place, especially when it got snowy part way up the mountain. I kept trying to tell them to walk like me, on four legs instead of two, but no one listened. It took us about 3 1/2 hours to make it to the top and I’ll admit even I was tired after running through the snow all day. 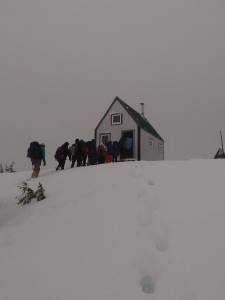 When I got to the top I was super hungry, so I found an apple pie that looked delicious. I had only had about two bites before the humans rudely took it away from me, but it was still the highlight of my trip. I also ate some cheese later when they weren’t looking, serves them right. I wasn’t sure if all of us were going to fit in the hut but we did and everyone made food and Denny gave me my supper too. It was pretty nice and calm until everyone started drinking things that smelled like hops and alcohol. Then everyone slowly got louder and less coherent and started stumbling everywhere, I had to dodge feet like crazy! Some of the humans even went outside and took pictures after taking off all of their fur! Crazy humans. I didn’t understand much of what they said except for that the 90’s were the best decade of all time and that Ryan Dix is super dope at a card game called President. Eventually everyone, including me, was ready to go to bed. 19 people fit inside the hut, most slept upstairs but I slept downstairs with Denny because I couldn’t climb the ladder, and the rest slept outside in tents. I had a great day and was excited for the next one.   Day 2   We woke up bright and early and it was a beautiful day! I went out with the early risers and they kept taking photos of me, which was kind of weird, but I guess it’s just because I’m gorgeous (this continued to happen throughout the weekend, I’m pretty much famous). I tried to pee on Nathan’s tent but Denny stopped me…(I peed on it later though). Some of the people never even left the hut, complaining about something called a hangover (whatever that is), but a lot of us went to the peak of mount Brew and from there we could see the Tusk and Whistler, it was stunning. Then someone took my favourite photo of Denny and me. 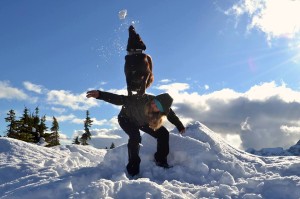 The rest of the day was spent sledding down hills and building gender-neutral snowpeople. 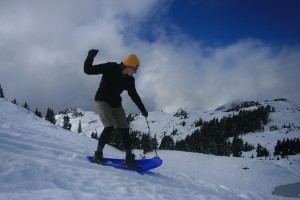 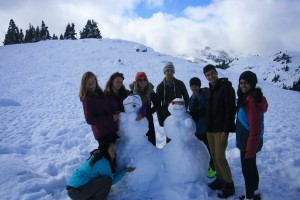 Another fun-filled day of activities. Some of the people listened to Nathan talk about how to take good photos, I wasn’t really interested, I’m more of a model than a photographer anyways. Later on that night everybody pitched in to make a big thanksgiving dinner! There was so much good smelling food, like chicken, banana bread, curry, soup, and lots more. This was my first thanksgiving but I can safely say it’s my favourite holiday. Nathan made something called mulled wine for everybody, which everyone really enjoyed; I thought that was pretty nice of him. We spent the night taking photos of the stars outside; finally people were taking pictures of something other than me! The photos turned out really nice too. 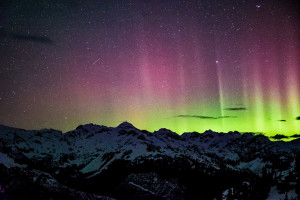 We even saw the Northern Lights! Everybody got really excited and ran outside to take photos right away. After taking a few more picture everybody decided to call it a night. We fit 21 people in the hut that night and some brave souls slept outside even though it was about -8C.   Day 3   After a long and super fun weekend everybody in the hut started to pack away all their wet and stinky clothes, that’s one smell that I won’t miss. Also Nathan took one for the team and burnt all the toilet paper in the outhouse, I don’t know how his nose could take it. We all had breakfast and got ready for the hike back down the mountain, everyone was bundled up in big jackets because it was so cold. But when we started walking the snow went away and it got warm really quickly and they all took off their jackets. Some of them even went skinny-dipping in a small lake part way down the mountain. At one point I followed a different group of people that were going up the mountain because I thought they were lost and I was trying to help them. Unfortunately I got lost instead! But Denny came back up for me and found me in no time and we were back on our way. The hike down didn’t take very long and it was very pleasant, not too many people slipped this time but Kane still managed to fall and get mud all over himself, silly goose. Everybody made it to their cars and I was ready to go home and have a nice rest. We had one more stop along the way before everyone made it home though, another place that smelled super good called Mag’s 99. And guess what, the humans didn’t get me anything from there either… still a really good weekend though. 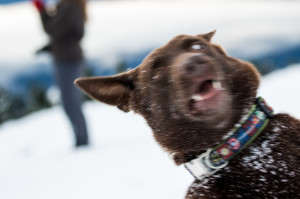 Stoked to go on another trip soon!

This entry was posted in Hike, Huts, Trip Reports. Bookmark the permalink.