Bear Mountain lies several kilometers south-east of Chilliwack lake, past the US border. Caitlin and I first got a glimpse of it a year ago from the summit of Mt Redoubt, which lies just north of it. Alpine select describes a few routes on the north face that looked promising, including a “famous” 5.9 Beckey route from 1967 that goes up the north buttress. We were further inspired by the excellent trip report (subsequently referred to as “the TR”) from 2010 of this particular climb, which I highly recommend if you are looking for a pitch-by-pitch description of the route. However, several aspects of that TR could benefit from an update and a few extra details, so here it goes.

Fact #1 Bushes have a tendency to grow over time and the more they grow, the slower you go.

Alpine select describes the approach as a 7.5hrs endeavour. The TR states 9hrs. It took us (and another party that was a couple hours ahead of us) 12hrs. While the start of the trail is flagged and you can actually see a trail, things deteriorate quickly as you approach the US border. There, the trail referenced in alpine select and bivouac follows the Chilliwack river. Getting to the river would require to cross a large swamp and the trail, already described in Alpine Select as “vague”, likely does not exist anymore. Instead, we decided to follow what appeared to be some brand new flagging taking a path through the old growth forest in order to avoid the swamp entirely. The terrain was reasonable and we slowly but surely got past the swamp and joined the old trail as it entered the forest. The trail is at times difficult to follow, often only consisting of a few telltales signs such as chainsawed logs from the 70s. 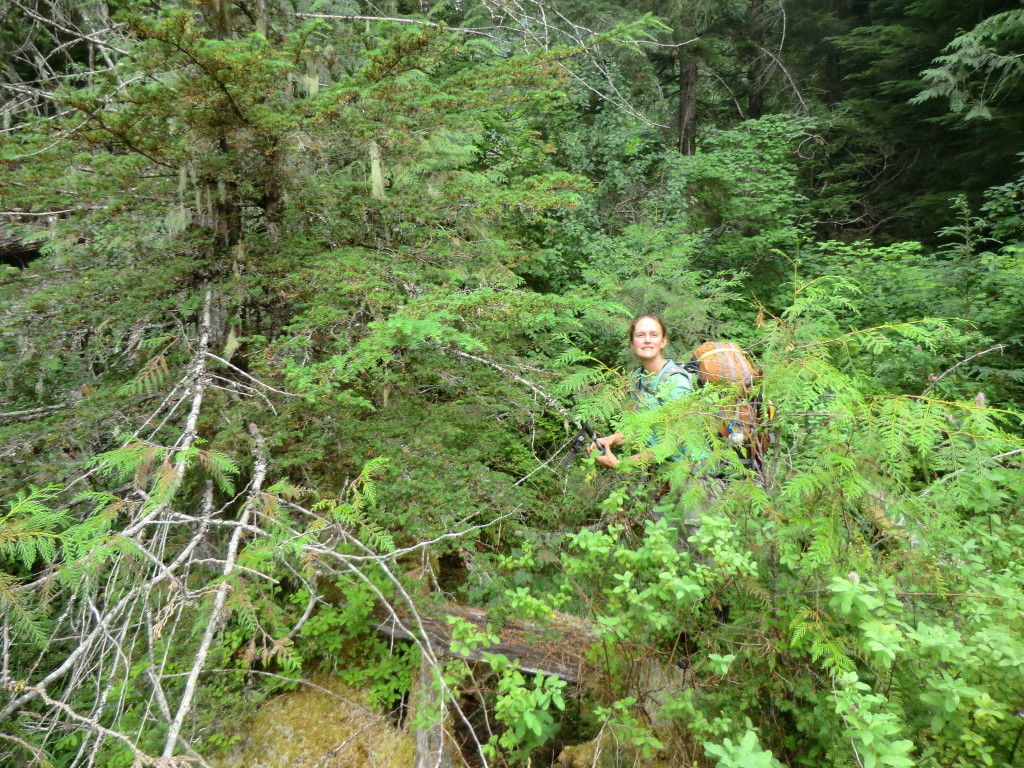 We occasionally saw the flagging we had tried to follow since the beginning. The last 1.5km from Bear creek were the worst. Devil clubs and thickets rule the land and gaining passage requires you to pay a hefty fee in sweat and blood, to which we added countless religious and sexual expletives for free. Finally arriving at the junction with Bear creek, we decided to dip ourselves in the river to relieve our mind and body, only to be mobbed by all sorts of flies as soon as we got out.

Past the junction, you start to ascend a ridge that will lead to Ruta lake. The terrain was surprisingly easy going and apart from the last 100m of elevation where blueberry bushes abound, we made it to the ridge without much misery, scaring off a bear in the process. 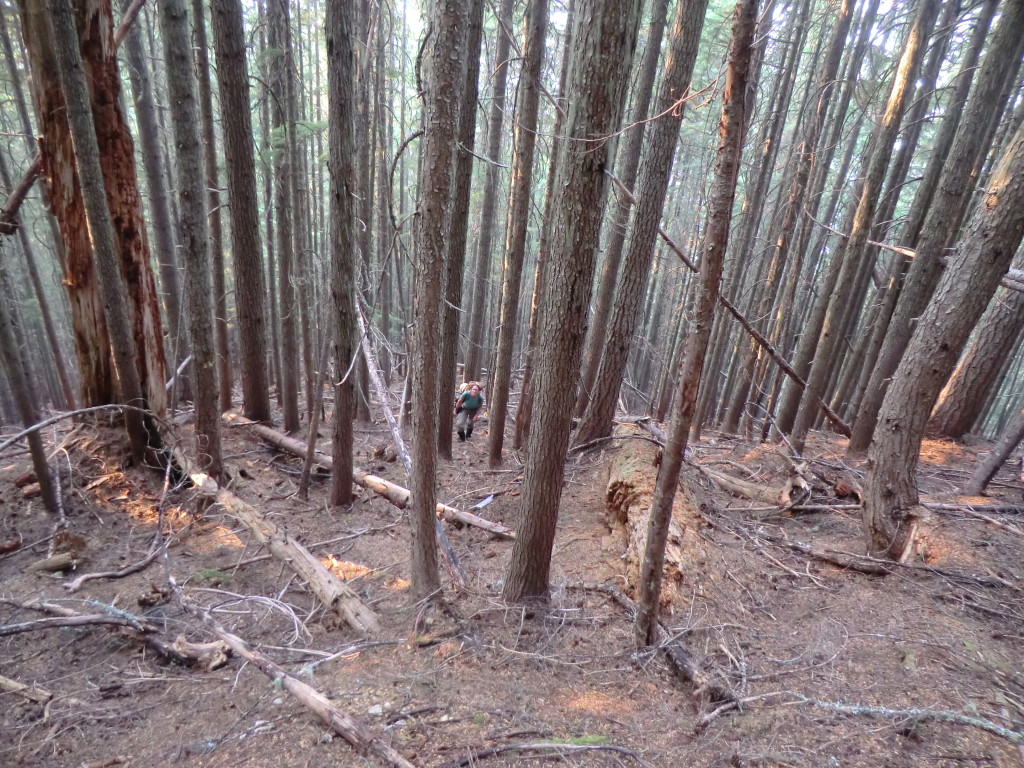 Following the ridge to Ruta lake

We made a pit stop on the ridge during which I went down to the lake to refill our water bottles (there is no water between the junction with Bear creek and the lake) and continued on toward our campsite (the saddle at the bottom of Bear’ west ridge). We arrived there at 8:30pm, 12hrs from the car. A faster party, or one better skilled at route-finding, could most likely save an hour or two. There is ample water supplies in the area, from snow melting off Bear’s south-west face. Mosquitoes were there too and the ever-present smoke from the wildfires did not seem to bother them in the least. We were surprised to find another party of two (Alex and Dan) bivying at the col as well. We learned that they were the ones who had put up the flagging and that they were going to climb the north face direct route the following day.

From the col, it takes about an hour to get to the base of the climbs. The north face direct route tackles the buttress head-on, while the Beckey route goes up the amphitheater to the left and regains the ridge after a copious amount of 4th class scrambling. This is where I would like to expand on the couple of sentences usually dedicated to describe the scramble. For about 300m of elevation, we found ourselves on compact slabby rock, littered with rocks ranging in size from pebbles to soccer balls and nicely lubricated with water and sand. Sometimes handholds were solid, sometimes they would crumble if you looked at them the wrong way. Any rock falling would trigger an avalanche barreling down the amphitheater like shotgun pellets. You can not pitch it out (there is nowhere to place gear), you can not bail (there is no place to build an anchor, downclimbing is not an option) and you can not fall (you will die). This is a very dangerous place to be and anyone considering to go up the north face should most definitely attempt the direct route or choose another climb entirely. 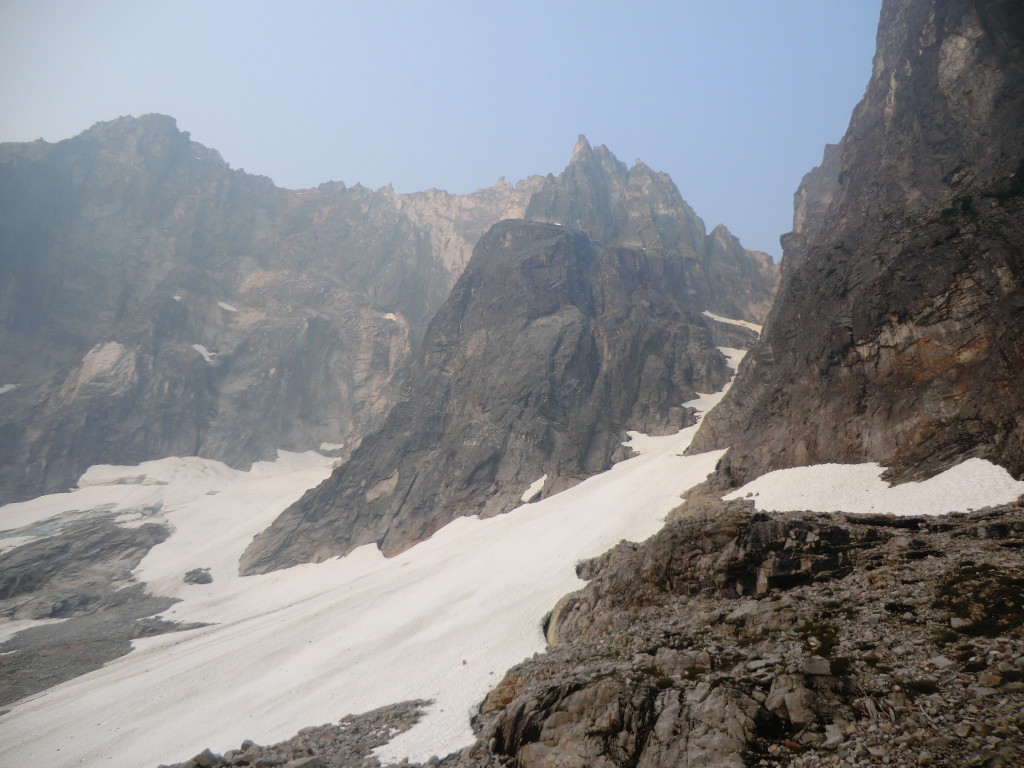 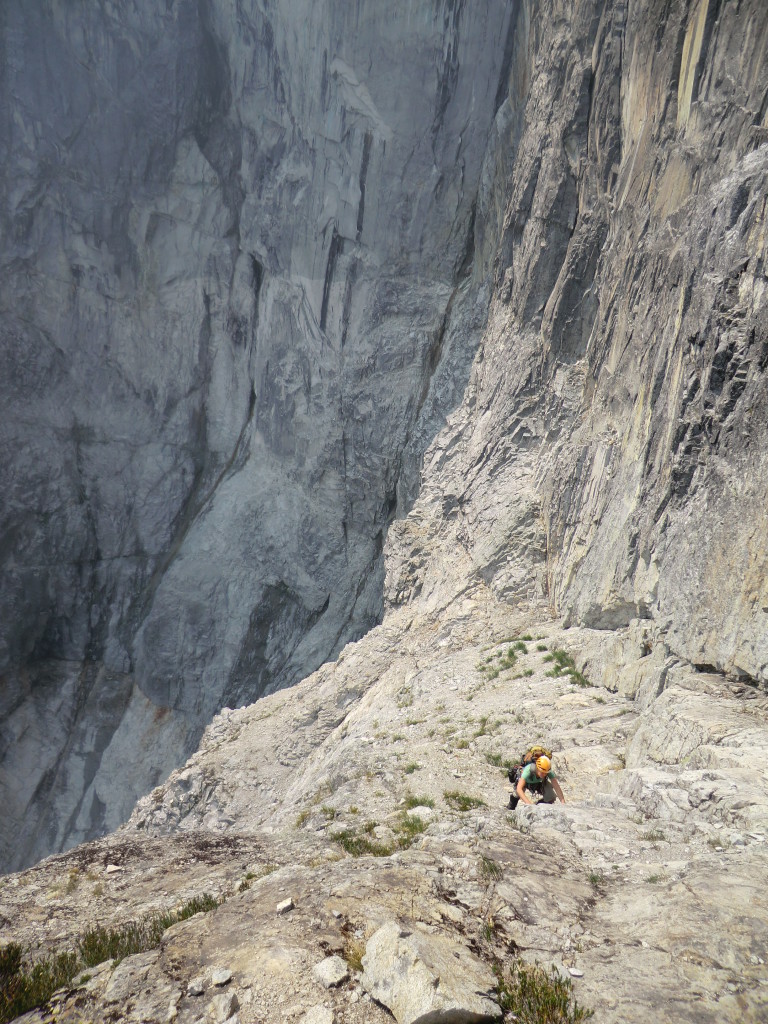 Caitlin on the 3rd class ramp leading to to the ridge. 4th class deathtrap in the shade behind her. Photo by Julien Renard

After several hours soloing this rubbish, we finally made it to the ridge where the actual climbing begins. The contrast in rock quality was overwhelming. From there to the summit, I can honestly say that this was one of the best alpine climbs I have ever done. The first pitch consists of a hand and fist 5.9 crack going up a corner which proved to be pure type 1 fun (despite the loss of a stuck pink tricam). Easier climbing then led to the “legendary” off-width crack, which I promptly bypassed, and up a short wall where you have several options to finish the climb. Alpine Select describes the tension-traverse used by Fred Beckey to reach a 4th class gully (thanks, we’ve had enough 4th class for the day) and a left-hand traverse to an overhang to complete the direct route. Instead, we opted for the line described in the aforementioned TR, which goes straight-up the ridge on some slightly runout 5.9 face climb. This line is fairly exposed at the beginning, but the holds are great and difficulties quickly ease off. 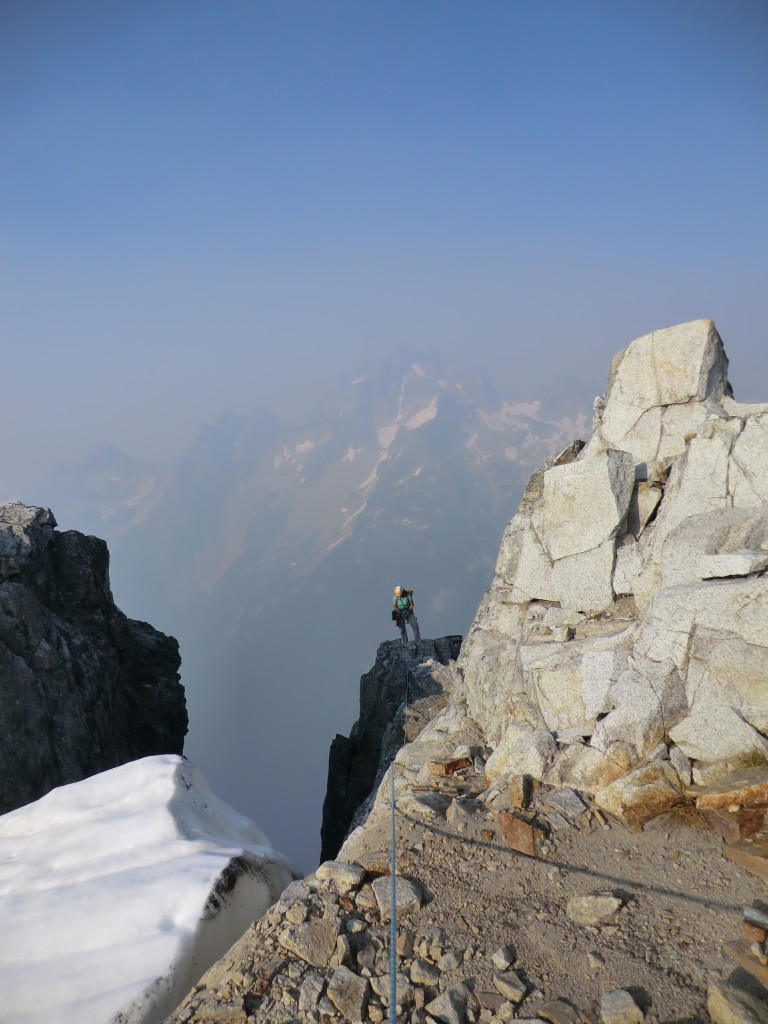 Caitlin topping-out on the summit ridge. Redoubt in the background. Photo by Julien Renard 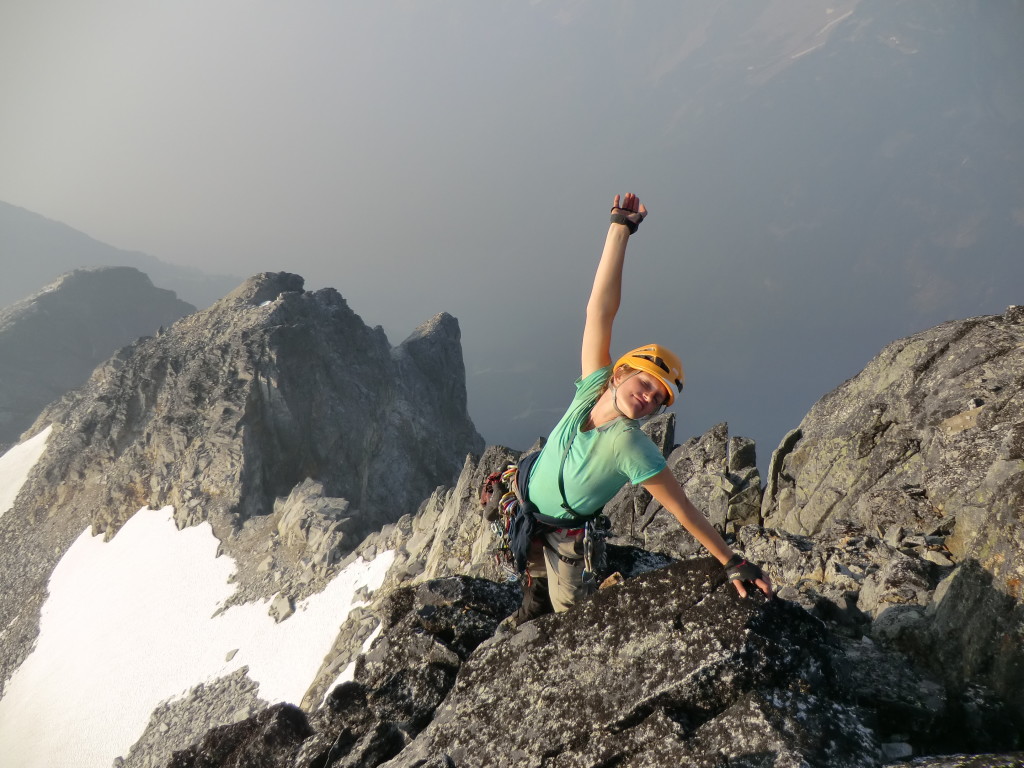 Caitlin enjoying the summit, with the route behind her. Photo by Julien Renard

Once we gained the summit ridge, we scrambled up the west ridge to get to the true summit. The summit register averages one entry a year, going back to 2006. At that point, Alex and Dan toped out onto the summit ridge but elected to not go to the true summit, longing for the beer they had left at camp. It was now 7pm (we started climbing the upper pitches around 1pm, but we are fairly slow climbers). The TR describes a descent route going down the south-west ridge, which is straightforward, but a bit of a detour. There is also a gully splitting the center of the west face that allows you to go back to camp faster. Alex and Dan described the lower pitches of the direct route as slightly confusing, oftentimes not really knowing where they were. That being said, the climbing was apparently good and they certainly seemed to have had more fun than we did on sketchy 4th class rock.

After a lazy start the following day, we made our way back to the Bear creek junction. Eager to try just about anything to avoid the oncoming bushwhack, and inspired by Nick and Lena’s thermarest float across the Squamish river, we decided to follow the Chilliwack river back to the trailhead. A minutious preparation ensued where we basically kept all out clothes on, but carefully wrapped various belongings in whatever ziplocks and garbage bags we had. Despite years of tender care for our 200$ sleeping pads, we were now willing to toss them in a river full of water, branches and whatnot to ease our suffering (Devil’s clubs are devious). 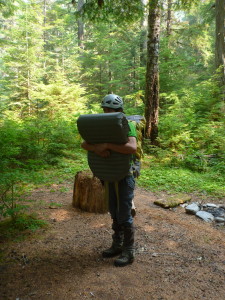 Ready for a swim. Photo by Caitlin Schneider

Fact #3 Rivers can be delightful

It turns out that the sleeping pads were not necessary since water levels never got higher than waist-deep. To our surprise and delight, the river was full of sockeye salmons, spawning here and there. Passing idyllic pools on after another, we were only dreaming of swimming (despite having water to our knees all the time) and taking breaks every hundred meters. Eagles soaring over our heads, ducks floating downriver, salmons, frogs, etc, the area is gorgeous. Granted, we saw bits and pieces of salmon here and there on the shores as well as many bear prints, but it is part of the whole experience. Logjams were fairly common and slowed us down a bit, but we never had to leave the river to bypass them.

Roughly 7hrs after we started on the river, we made it back to the trailhead. This was a bit slower than the bushwhack, but infinitely more enjoyable. 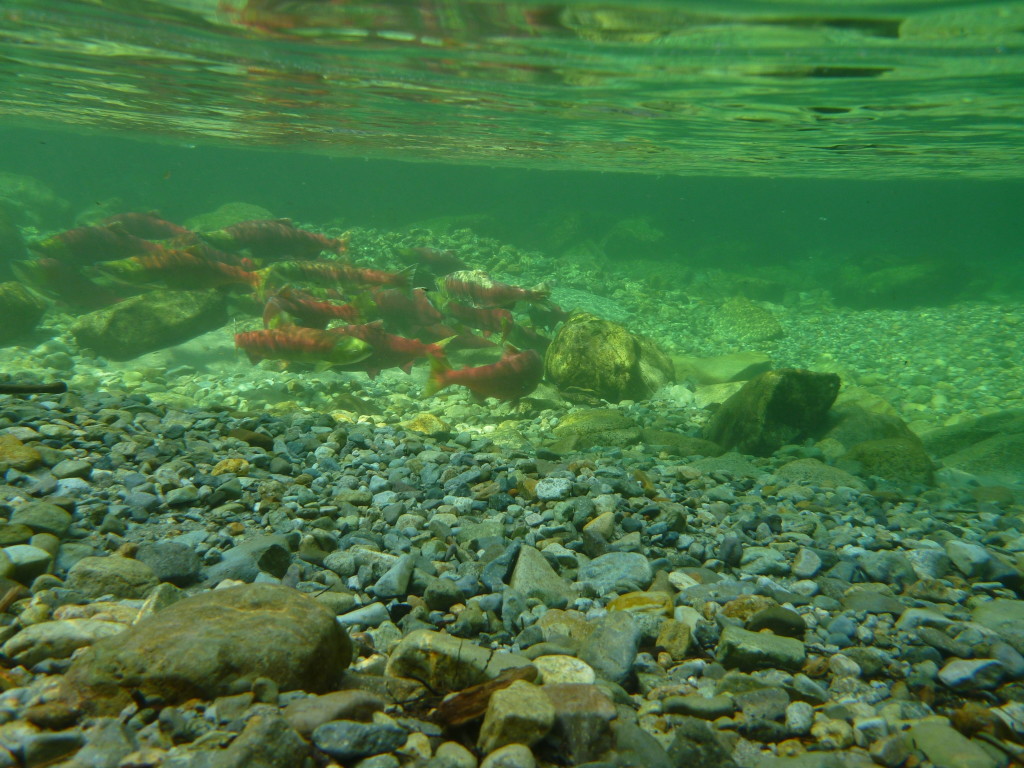 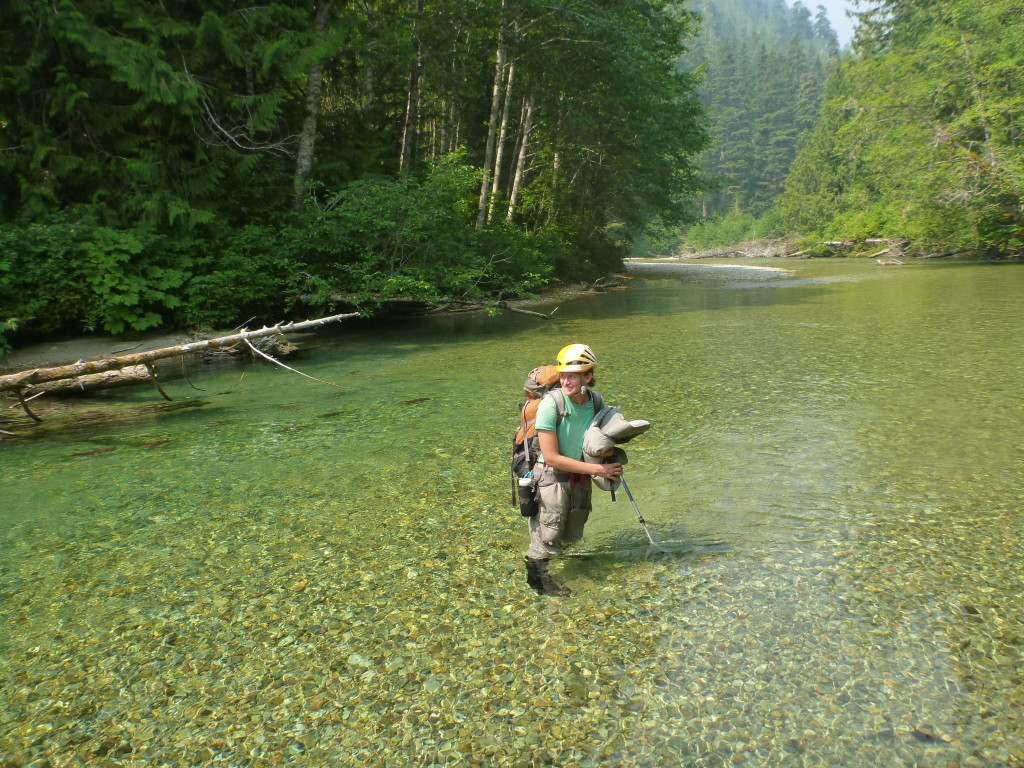 The “trail” and some more salmons. Photo by Julien Renard 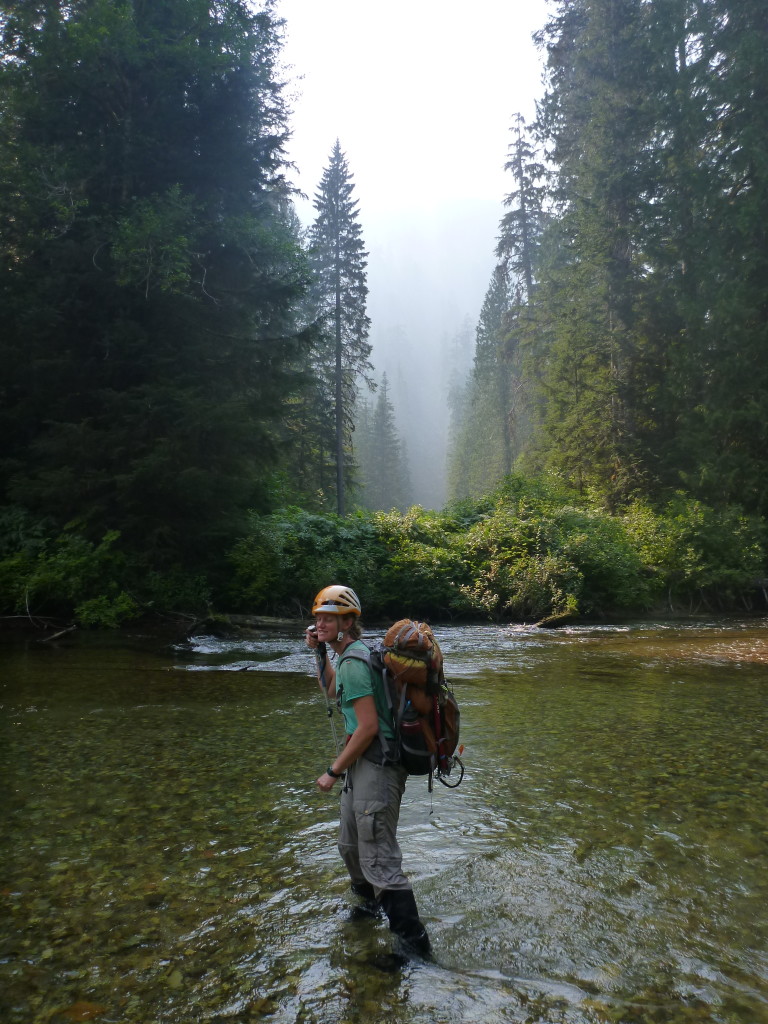 One Response to Bear Mountain: a remedy for clueless ambition