Blackcomb Peak: a remedy for the wimp

Arran and I have felt deceived many times by alpine climbing books. In New Zealand, we’ve been defeated, not even halfway up, by dark, imposing mountains that are supposed to be “an easy, straightforward scramble”. In Leavenworth, we have been spooked off 5.8 multipitch trad routes, and challenged by 5.6’s. In the Tantalus, we never passed the glacier of Alpha Mountain (although part of this failure can be attributed to an unfortunate alarm clock incident). Being both moderate climbers and plenty experienced with mountain adventures, when it comes to the idea of combining the two, we must admit, we are chickens.

So yes, every time we look at a climbing guidebook, we first assess it suspiciously from across the room, and when we finally dare approaching it, touching it, and opening it, we hesitate. What dangers, wrong tracks, cruxes, crouching gargoyles and witches the usual “climb the west face and descend on the other side” kind-of descriptions actually really involve?

As we were squinting at the Alpine Select guidebook in the distance, Arran had a brilliant idea.  “What don’t we just start at the bottom?” OK. We open the book. Blackcomb peak, “low 5th”, supposed to be one of the easiest alpine ascents of the entire book. 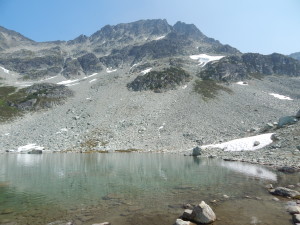 We start hiking on a sunny afternoon from the top of the Solar Coaster chairlift towards Blackcomb Lake, passing enthusiastic pods of Japanese walkers and fat marmots lazing in the sun. Because of our state of mind described above, we had decided to leave more time for the adventure than the chairlift operation schedule would provide, opting for an afternoon-to-evening climb and a night at the lake, to take the first lifts down at 10am the next morning.

A 30 minutes walk and we are at the lake. We dump our extra equipment behind a rock (yet ignorant of marmots’ soft spot for polar fleece) and start scrambling straight up onto moderatly pleasant loose rocks and talus slopes. In one hour, we are at the base of the climb. 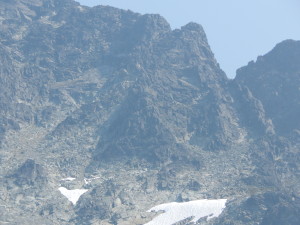 There are three obvious spurs there, the rightmost one shouldering the famous DOA couloir. We know from past blogposts that the three of them go, and we decide to climb the middle one. 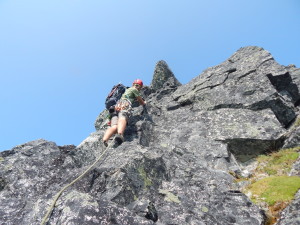 Wow, The climbing is really fun! not much exposure and a mix of solid and sneaky loose rocks. There is not much route finding to ponder on: stay on the arête, and climb on. No obvious difficulty either: it is (surprisingly) as described in the book: a low-5th climb. The breakdown of pitches falls naturally, as the arête is made of successive spires. 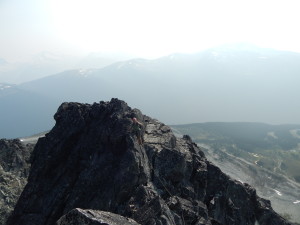 Arran on top of one of the spires

We find ourselves just below the easy-to-walk-to summit in 4 pitches and 2 hours. As we munch on our snacks in awe of the lakes below the Decker Glacier, we give each other a look: Was that it? 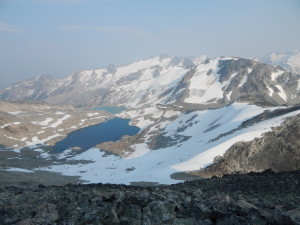 Decker Lake on the East side, from the summit of Blackcomb Peak

We walk back to the lake via the Blackcomb-Disease ridge col, navigating through lost ski gear in the sunset light, and are welcomed by armies of fierce mosquitoes following us everywhere including into the lake. The fat marmot is watching.

We are cured! We want to do more! We know, of course, that our future alpine climbing trips will sometimes involve unfortunate incidents, type-2 fun, and miserable retreats, but what we also know now, is that it can be as simple as this: a fun, relaxed evening in the mountains. 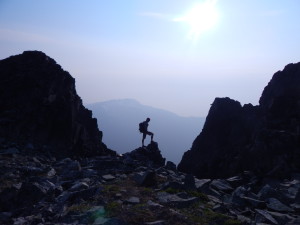 Arran inspecting the DOA couloir in its summer dress

One Response to Blackcomb Peak: a remedy for the wimp