After many many months of planning the Harrison Hut renovations, Kevin Boland, Haley Foladare, Devon Campbell, Roland Burton, Dave Burton, Anna Szeitz and I were successful at installing the new door and floor to the Hut! 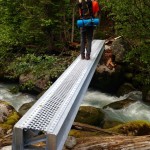 Jeff’s Bridge on the Harrison Hut Trail in all it new 2017 glory. 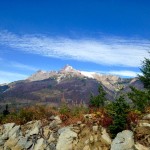 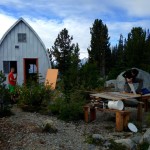 Devon and George working on the new floor at Harrison in 2017. 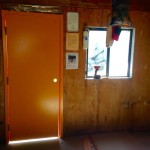 The new door at Harrison Hut 2017 before the passenger is installed. 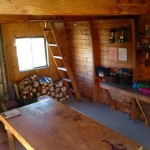 Thursday: Roland, Haley and Dave set out in the Jeep early in the afternoon while Anna’s car with myself, Devon and Kevin left closer to 5:00pm. We stopped briefly in Whistler for a bite to eat before continuing on to the trail head. We arrived around 9:00pm to find Roland’s tent already asleep. The rest of us were quickly asleep.

Friday: We were up at 6:30am with the intention of heading up to the Hut quickly to begin work as soon as possible. Devon, somehow  able to function without breakfast, decided to get a head start from the group and started up the trail just after 7:00am. He proceeded to basically run up the trail arriving at the Hut before lunch. The rest of us began our trek with blue sunny sky at 8:00am. Kevin and I went ahead in one group while Roland, Dave, Haley and Anna took a more generous pace following us. When Kevin and I arrived at the Hut around 2:30pm Devon had started to deconstruct some of the furniture in preparation for removal. In the next 2.5 hours until Roland’s group arrived we began measuring out the panels for the floor. The old floor consisted of 6 panels that sit in a 3×2 grid. To achieve a stronger floor we offset the new grid of panels so that they would overlap with the new panels; we had a lot of cutting to do! We enjoyed copious amounts of Mr. Noodles as a mid-afternoon dinner/snack. Before days end we had finished measuring and cutting the first half of the floor. The solar lighting worked wonderfully as I made my dinner (a re-creation of Jeff’s glorious pesto pasta he had made us for G1 the week before). Kevin, Dave and I worked on a few games of Free Cell before everyone’s internal clock struck sleep by 10:00pm

Saturday: It was another early rise at 6:30am. I enjoyed a porridge almost worthy of porridge made at home with brown sugar and powdered milk. I also discovered that powdered milk added to my stone ground chai mix made it absolutely stellar. I may never go without powdered milk on my trips again. Once breakfast was wrapped up everyone quickly got to work. Devon and Dave headed back down the trail to Barr Creek to cut the logs crossing the new trail heading to Jeff’s monster bridge. We couldn’t find the chain oil before leaving and some canola oil/paint thinner mix was fashioned on the spot. It seemed to work, but the chain saw had other problems causing them to only get through about 10 logs. Many more still need to be cut and this is beside the 25 more logs that lie across the rest of the main trail. We had intended to get these on Sunday but it will have to wait until another workhike when the chainsaw is finally reliable.

Back up at the Hut, Haley, Anna and I continued removing furniture, measuring out the plywood, then cutting it to fit. Kevin and Roland got started on the door, ripping off all of the extraneous wood pieces supporting the old door. After fiddling with the frame we secured the door hinge side, attached the door and discovered, much to my surprise, that with the framing the door fit nearly perfectly within the frame. The door opening, not being quite square, required a few small panels to ensure the frame was properly square to the door. The weatherstripping and sweep were attached with some fiddling and after some hacksaw work to get them to the correct dimensions. We didn’t realize when we put it on that it would affect how the door closes if they are too far out so when we finally got everything installed including the door closer we found the door still wouldn’t latch shut properly. It took a bit of troubleshooting before noticing that we had to redo the weatherstripping. By 9:00pm we finally had the door and all the accessories fully installed and functioning beautifully! The only minor problem seems to be with the door latch that appeared to be a bit loose.  On another trip up there it would be worth taking the door latch off and tightening up the bolts holding it on. There is a small pin in the wooden hardware bucket in a small white cardboard box that can be used to remove it.

On the floor sides of things we cut the boards so accurately that we had trouble removing them from the floor so that we could put the glue down underneath them before nailing them in place. After all the boards were put in place we installed the baseboard – fully around the edge of the hut (unlike before). We installed the baseboard slightly different than before such that the furniture could be removed without removing the baseboard (should the furniture every be redone in the future). We reinstalled the long wall counter and crafted new angled supports. We finished everything around 9:30pm to the tune of homemade wine.

Sunday: 6:30am wake up – Roland, Haley, and Dave left around 8:00am to head back to the car. Devon, Kevin, Anna and I stayed up at the Hut to finish the Hut Inventory. By 9:30am Devon and Anna headed out to collect the chainsaw and garbage at Jeff’s Bridge. Kevin and I left shortly after at 9:45am. We tried to descend as quickly as possible to catch up to Devon and Anna; I even though I heard them a few time. Hallucinations? Kevin wondered if hearing things could even be called hallucinations? We reached Barr Creek Bridge and tried to call out to Devon a few more times but heard nothing. Against my better judgement we continued to Pika Creek where we stopped for a snack and then proceeded to hear Devon’s whistle coming from the trail behind us… We missed carrying out garbage from Jeff’s bridge. Darn. For next time. We all got back to the trail head by roughly 4:00pm and promptly made our way to McDonald for a long deserved filling of fast food.

I would like to acknowledge some of the exceptional individuals who made these renovations and the new bridge come to fruition. Roland Burton for the persistent care you put to the Hut, running workhikes, measuring everything that needed to be done, assisting with the door, plywood purchase and painting. Christian Veenstra for loading up everything on to the truck that Jeff would be taking up for the helicopter while he was still in Edmonton. Lastly, but most importantly Jeff Mottershead for doing all the organizing regarding the helicopter, designing the bridge, building the bridge and installing the bridge.

Finally, the VOC’s biggest thanks to Mountain Equipment Co-op for their partnership is funding the work completed as a part of these improvements. This would not have been possible MEC’s contribution and persistent community involvement and commitment to outdoor recreation. Thank You.

PJs are the bomb, Instagram is a waste of time. Snow all winter, Water all summer. Huts Coordinator from 2016 to 2018.
View all posts by George Hill →
This entry was posted in Trip Reports. Bookmark the permalink.