Snowspider Hut via Twin One FSR

The Plan: I decided it might be “interesting” to visit the Snowspider Hut. There are several ways to get to it; none of them include a trail. The Twin One FSR approach looked like we might drive to within 2 km of the hut. If we were bored and the weather permitted, we might climb Snowspider. If we left Vancouver around noon on Friday this would spread out the driving somewhat, and we could spend Friday night at Tsek (Skookumchuk) hot spring, and lessen the driving burden for Saturday.

Personnel: We had a fairly tough carload, and they had to be keen because they had to negotiate getting half of Friday off work. Besides Lucy and Alberto who are known to be tough, we acquired Flo from France who is into gut bacteria, and Max from Holland who is interning at the Dutch Consulate.

Gear: We had compasses, GPS’s and maps from MEC. As the plan mentioned possibly climbing Mt Snowspider, most of the crew had ice axes, crampons, helmets, in other words Way Too Much Stuff. Knowing the Hut is small and fearing that it might already be full, we brought our tents. And we brought lots of food, and stoves. As we were planning to be at the hot spring, we also had various towels, bathrobes, etc. The Jeep was pretty full.

Friday: At Pemberton we encountered brilliant blue sky and Mt Currie looked spectacular with a thick dusting of snow. Lucy warned us that we might arrive at the hot spring before it got dark, which would present a problem for those of us who didn’t have swim wear. When we got to the Twin One FSR at km 9.8, we decided to drive up it to see if we would be stopped by road washouts, or snow, forcing us to find another destination. The scenery became increasingly beautiful, the road was great, and the snow started where we planned to park, at 1250m elevation. It was dark when we finally got to Skook at km 46, so no need for swim wear. As evening wore on, the tubs at Skook became full of people, mostly a bit drunk, some naked. Around 10 pm Ian Johnston’s carload arrived with Sarah Taylor, Alex, and Kay. Sarah and I found a clothing optional pool and reminisced about life and our previous hot spring adventure, at 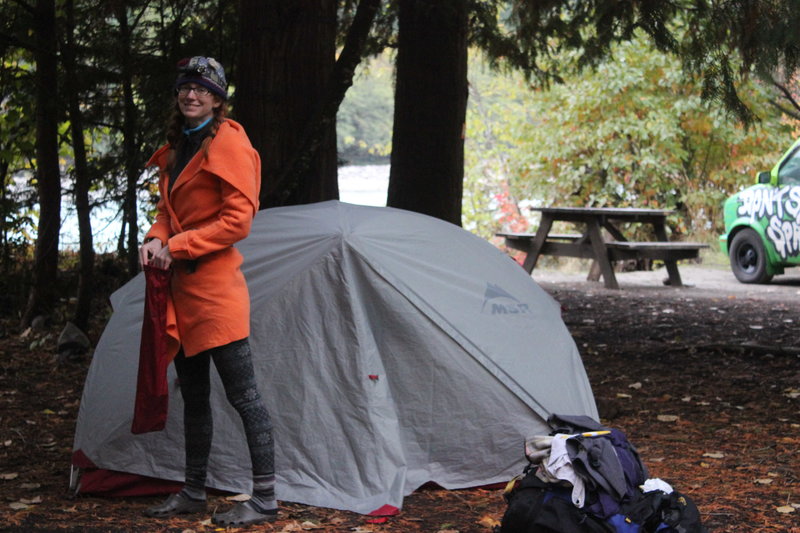 Saturday: The weather was looking less lovely as we parked the Jeep and told our GPS’s to go to the Hut (Thanks to Bivouac, for providing the hut coordinates). We started up a logging road that appeared to go in the right direction and which had some fresh tire tracks in the snow. We assumed the driver who made the tracks knew the best way, but apparently not. The tire tracks eventually gave up and drove back down. Next we followed the road through some nasty slide alder until almost anywhere was easier to walk than on the road. We started following a creek but soon realized it might not be the creek we wanted. 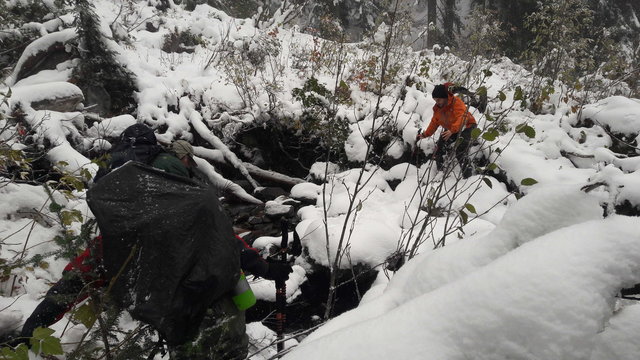 One of several interesting creek crossings.  Photo by Max 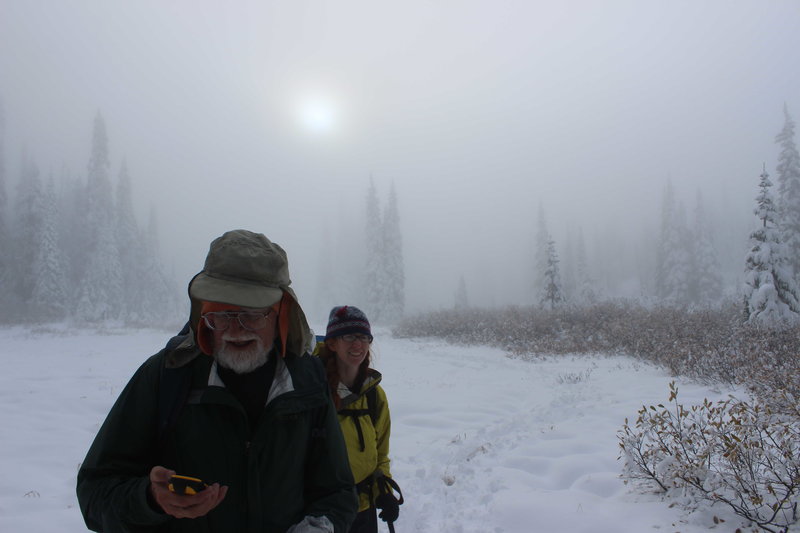 Roland talking to his GPS. Photo by Max

The trip was a useful GPS exercise; we generally asked the GPS for the direction to the hut, then told the compass people and they came up with a suggested direction to walk. Around half way, we discovered that the compass people were using magnetic north and the GPS people were using true north, which mistakenly put us up some sketchy terrain on the climber’s right of Twin One Creek. We did a lot of backsliding in the snow, Lucy put on her micro-spikes and they balled up with snow. Inevitably we got closer to the hut and soon walking became easier, in meadows, while avoiding small frozen lakes. At the hut my GPS said we still had 4.5 metres to go, but that’s close enough for me. The weather was not encouraging us to climb anything so we sat around talking, eating, etc. 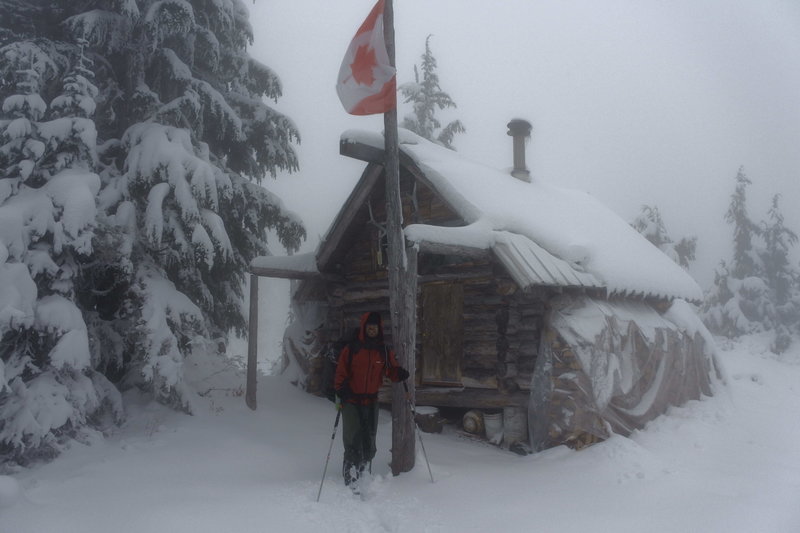 Arriving at the hut. Photo by Flo 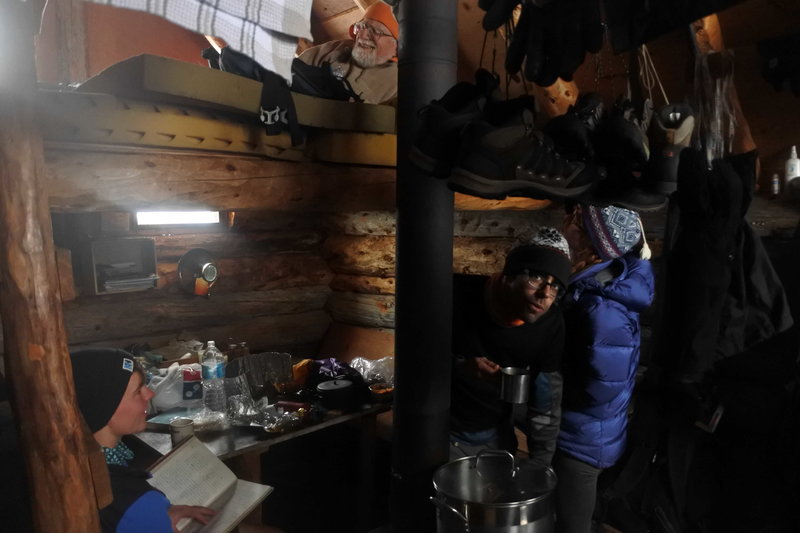 In the hut.  Photo by Flo

The Hut: Is described as “small”, sleeping space for four, but we found it to be quite fine. It was obviously made by people who knew how to use tools, not just a bunch of university students. There was a fine wood burning heater and a huge amount of firewood all split and stacked under plastic at the sides of the hut. There was a full propane tank to power the cook-top. There was a sink, half a litre of hand sanitizer, four woks, six excellent steak knives, toilet paper, fondue forks, three inch foamy mattresses, two pairs of reading glasses, and all sorts of other interesting stuff. There were two abandoned sleeping bags, not in good shape. The hut was warm and exceptionally dry; we dried our boots and anything that had gotten wet on the way up. Rather than making it mouse-proof, there was a hole under the door big enough to admit weasels, which would certainly keep the mice under control. There was no food up there, so maybe the mice had no reason to be there. I’d guess that most of the stuff arrived by snowmobile via Van Horlick Creek, and a lot of love went into the hut. It is probably an “unregistered” hut so officially it isn’t even there and the builders don’t admit who they are, but there is a cash box for donations.

Sunday: Max told us that it was necessary for him to break the ice on one of the small lakes and go swimming, but the rest of us didn’t find that to be necessary at all. Apparently it’s a Dutch thing. We discussed the route we had taken to get to the hut and decided that almost any other route might be better, so we followed down Twin One Creek on skiers right, through meadows, then several patches of slide alder, avoided a cliff that dropped vertically into the creek, followed some bear tracks in the snow, and hit what we think is the “correct” logging road, more bear tracks, and soon we were back at the jeep having lunch, eating cake, brewing coffee, etc. Past Pemberton, Alberto drove us home without incident.

Trip Leader Survey (Where VOC asks us how the trip went)

Name of the trip? According to the Trips Agenda, it was called “Snowspider (Hut)”.

Did others take Leadership Responsibility? We don’t use the Army model for leadership; we discuss options and share the consensus decisions.

Hard to generate enthusiasm? No, hard to find people prepared to take Friday off work.

Effectiveness of pre-trip meeting? We didn’t have one; answered questions by email/phone.

Prerequisite Skill sets? Politeness in hot spring. Ability to warn driver of potholes. GPS/compass navigation. Not complaining too much.  Driving while tired.  Walking in snow.

VOC Resources? Like, somewhere to advertise the trip? Our WIKI has a link to Bivouac.

Trip Rated Appropriately? We seemed to know what we were doing so, yes.

One Response to Snowspider Hut via Twin One FSR