Two out of Three-Triple Peak on Labor day.

Mountains on the island are something of an enigma to many mainlanders,myself included. Mostly because the ferries make logistics a pain and we have lots of pointy things to climb on this side of the pond, on both sides of the border.
But, I thought I would make an exception for Triple Peak because a couple photos I have seen made it look spectacular, and very much like a “proper” mountain, despite a very modest 1500m height.I also figured this would be a perfect solo objective to practice routefinding on 3rd-4th class terrain, which honestly has never been my strongest point.

When the original plan for Labor Day weekend fell through,this was chosen as the next best idea. I haven’t been on a ferry long enough that I forgot how insanely busy they can get on a long weekend,especially if you make a point to catch up on sleep and don’t get to the terminal until almost 8AM. Two and a half sailing waits later, I finally managed to get across and after a quick pit stop was driving towards my destination- a logging road that branches off the highway halfway between Port Alberni and Ucluelet. Luckily, it was very recently fixed up by the good folks of the Vancouver Island ACC to improve access to the new hut that they are building on the nearby 5040 peak, accessed by the same road. I was able to drive 7.5 of the 11 kms with my small car on a road previously known as 4wd only. A good thing too because by that point I was running a bit short on daylight time for the hike in. 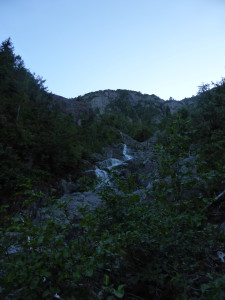 The approach is a very nice route that zigzags up the drainage with more waterfalls than you can shake a stick at, all on easy terrain and clean granite. I got to the lake with just enough time to chat with a couple groups of climbers,make dinner and enjoy a beautiful sunset 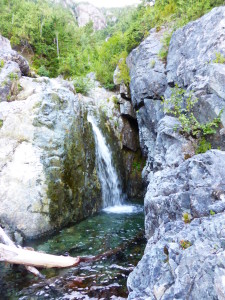 One of the many waterfalls on the approach to lake. Triple Peak in the afternoon sun. Western summits visible. Taken from just below the lake. 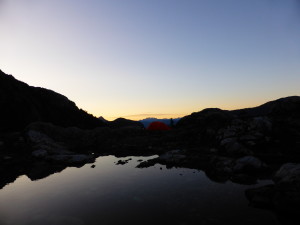 Sunset and one of the tarns near camp.

Triple Peak, as the name implies, has three summits. The twin peaks in the foreground are the Western summits, essentially one tower with a forked top, and the slightly taller true summit a separate tower a bit south-east. My original plan was to ascend the Scramblers Route up the Western summits, which goes up northwest “ridge”, descend down East ridge, and if feeling up for the challenge, go up the true summit via the “open book” route. I brought with me a 40m halfrope, alpine harness and some rap slings as I counted on a pretty high likelihood of having to rappell off something somewhere. Seeing as the approaches looked mostly dry from the lake, I left my ice axe in camp, same as the other parties I’ve chatted with. Western summits in the foreground, True summit hiding behind to the left in the photo. 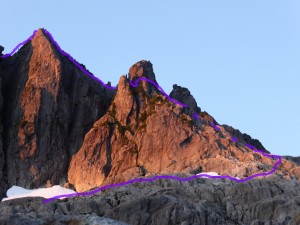 Route,note where gendarme is bypassed.

The approach starts as a hiking route marked with cairns, up to where the lower slabs begin. From there I went up easy class 2 terrain trending to the right towards the start of what the guidebook called the northwest ridge. I found the route description a bit short on detail and and terrain not entirely straightforward, so second guessing myself quickly became theme of the day. 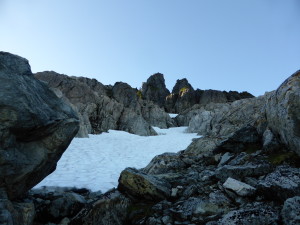 Approach to the first gully.

The one thing clearly mentioned was that the prominent gendarme was to be passed on a ledge to the left, but first I had to get to it. This proved interesting, as the picture of the route shows a straight line going up what looked like 5th class headwall and I wasn’t stoked about the line I saw. Then I spotted a red rap sling on a chokestone in the gully to my right. Aha! This must be the route, I thought 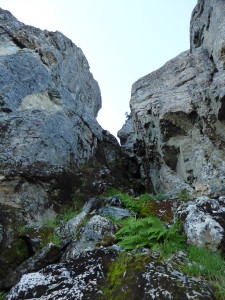 I downscrambled into the gully, scrambled out of it to the right to bypass the chokestone, got back in and got to the point where I had to turn left to get on the ramp at the base of the gendarme. Except there was a slabby section splitting the gully right and left . After exploring and exhausting other options, I found a reasonable spot to get up and across the slab and onto the left ramp below the gendarme. 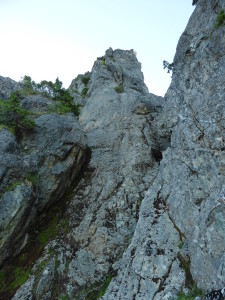 Up the center and over to the left.

Peeking over the edge, the next bit looked dubious as anything. 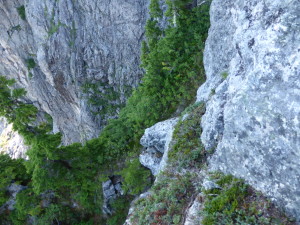 A downscramble onto a narrow ledge over another gully, or potentially bush-bashing to a lower spot to the left. After more second guessing and exploration, I found a rap sling on the little tree and dropped in. 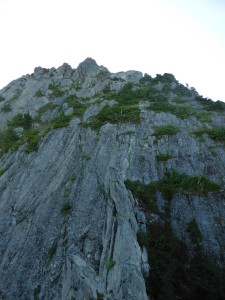 The guidebook calls this a ridge.To me it looks more like a low angle face.

Without further incident, I soon got to the Western summit, enjoyed a snack, dropped down and traversed to the base of the second, slightly taller one. More class 3-4 with one reassuringly wobbly handhold and I was feeling on top of the world. Views were amazing. I could see the nearby mountains, the Broken Group islands, and of course the true summit tower. I also saw and heard another party making slow and uncertain progress towards it over snow that sounded very crusty. 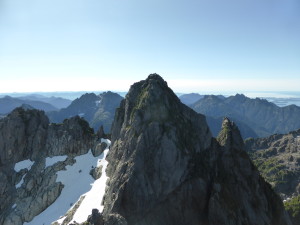 Next part of the journey was supposed to be the East ridge, aparently the “standard descent route”, also class 4. One thing I learned is that the route description tends to use the term “ridge” very loosely and doesn’t mention any gullies, so I spent a bit of time trying to figure out where to go. I tried a route around the tower which ended in a loose steep gully without a clear view how it ends, then I went back up the summit and tried downscrambling from there. As far as I got down the ridge.

At one point I climbed down a super cool 3 meter chimney and on exit stepped on a sharp precariously balanced rock that hit my leg and left a mark that is still visible 4 months later.Shortly I got to a commiting step where I could either rap down to the next ledge,hoping the route goes, or retrace my steps while I still could. I chose the latter. Descent down the featured slab back towards the gully at the base of the gendarme.

The return to flat ground was very straightforward with easy traverse into the bush below the gendarme and then a rap into the forked gully. Rap back down the mossy corner

Once back at the camp, after a refreshing swim in the beautiful lake I contemplated staying an extra day and trying the route up the main summit on it’s own. Then the other party came back down after trying it, and despite being 2 people with a full rack,turned out they could not get across the moat. Another party went around the moat via a stiffer rock route. That sealed the deal. The way back went smoothly and I even managed to get on the ferry within 30 minutes of getting to the terminal.
In all, it was a super fun little trip that barely scratched the surface of what island mountains offer and one of these days I will be back