Roland, Aaron, and I went up to Brew, and stayed one night. We called it a workhike, and figured that there would be things to do, such as carry journals, empty the cashbox, measure the doorframe, and deal with the outhouse.  After an email from Lucy offering to do some of those things, we gladly accepted the help of her group, who was going up a few days before us.

The majority of the ski in was fairly uneventful- the weather was nice, but the snow was not. Aaron and I got stuck in wolverine gully for a bit, but after some strategic side stepping we managed to emerge with our skis and pride still in tact.

Once arriving at the hut, Roland got the fire started using a can of old paint thinner, and a variety of other substances that caused the hut to smell funny, but were very efficient at producing heat.

I set down my pack and began some workhike tasks. The group before us had done all of the things on my list, so I sorted some cards, gathered trash, and investigated the outhouse situation. Thanks to Jeff, and the massive post-hole digger he carried up, things are looking less shitty than I was expecting.

I went back to sorting cards, until after dinner when Roland and I consumed one of his infamous chocolate bunnies. Aaron attempted to make a quesadilla on his snow shovel. 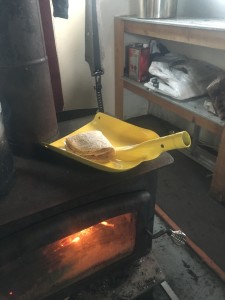 I started sorting through the bookshelf, and found some old log books. People write pretty interesting things in these, and from reading them, it became clear how much of an impact Brew Hut has had on the outdoors community. 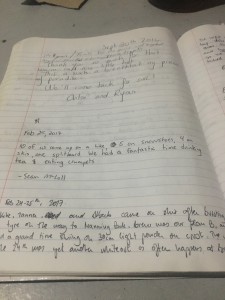 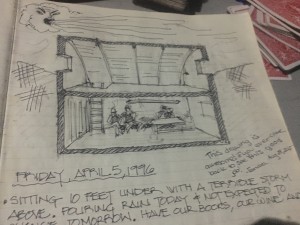 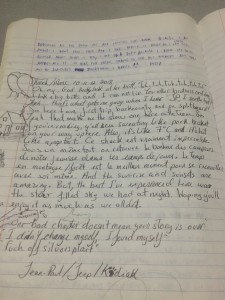 The next morning, Roland measured the doorframe, and I sorted all of the journals, and more cards. I also attempted to pack out some trash. I enjoyed playing around with the solar panel on my pack, which is not efficient enough to actually do anything and is pretty much just extra weight. Roland found this entertaining.

The ski out was much faster than the way in, still with horrible snow, and a bit of boot packing.

Overall, the trip was a nice “workhike.” We all enjoyed ourselves, and all of the cards are now sorted.

This entry was posted in Huts, Ski, Trip Reports, Workhike. Bookmark the permalink.