Participants: Anita, Devlin, the tirfor, poop and me

On Friday, April 27, Anita (not of the VOC), Devlin and I started off towards to Brew Hut with the heaviest post hole digger I could find and a couple buckets labelled “Turds” and “Bonus Turds.” The truck was parked past the 5 km mark, and I was pretty sure we were going to get stuck getting back out, since the deepest snow we encountered on the way in was on a downhill section, just before we stopped. I elected to leave the tent in the truck. Anita had a ticket for the late flight out of Abbotsford on Sunday night and was expected back at work in Edmonton on Monday morning. Anita’s a novice skier. Devlin is nine. We’d just bought a bunch of knock-off Imodium for much more urgent reasons than just-in-case. We started at dusk.

Taken all together, this might seem foolish and inexplicable. I can explain, but it won’t be any less foolish.

Anita decided to get backcountry skis this fall. She did her AST1 in the Rockies, and that went more or less fine. After that she came out to Waddington Hut and had a fiasco royale on the way down, partially because she was really tired from the way up, partially because it’s nontrivial skiing in the forest and partially because the snow conditions were ghastly. She said she would give away her skis and never go again. For comic effect I convinced her to slog across the Neve with us shortly afterwards, which was aborted coming out of Little Garibaldi Lake when I broke a pole. Potentially carrying three packs with one pole sounded like a bad idea, so we turned around. We went up to Red Heather the next day and snow-caved. Above the hut the lighting was bad, the snow was deep and Anita had a fiasco royale and said she would give away her skis and never go again. Shortly afterwards she signed up for Brew.

There isn’t a huge amount of time to get from Edmonton after work on a Friday, get to the trailhead at Brew, up to the hut, ski somewhere and come back in time to work Monday morning, especially when you’re not fast on the uphill or downhill. To make it plausible that we’d do something other than just make it to the hut, I thought that a Friday-evening ascent to the hut would be the ticket. It’d really help that plan to get up to the R200 junction by vehicle, so I decided to give it a shot even if it was a bad idea. The only part of the plan that was half-ass defensible was that I threw the tirfor into the truck. (More on the glorious tirfor later.)

Devlin and I picked up Anita at the airport. After a bit of a kerfuffle that is intentionally vague, we bought some Imodium in Squamish and went to Mag’s 99.

I drove through some snow like an idiot (which comes naturally to me) in an attempt to make it up to the R200. We fell way short. There’s a high point at the 5 km mark, and then the road goes down to the bridge and back up again. The snow was deep coming down from the high point, and I was pretty sure we were going to get stuck trying to get back up, but I didn’t mention that because we had enough to worry about.

For whatever reason (dumbness? stubbornness?) I didn’t re-examine the decision to make it to the hut that night. I had a tent in the car, but I left it because we were going to make it to the hut. I offer no justification or rationalization—just the events that happened.

When I registered for the hut back in the day, there was a thing that said that everyone going to the hut should be bringing poop bags because the outhouse is full right up to the seat. Veenstra and I talked about this for a while. It was too early to dig the poo out (mostly frozen) and bury it somewhere (ground buried in snow and frozen), but if I brought one of those 18 L pails and filled it with poo, that’d buy some time and stop people from pooing willy-nilly around the hut. Veenstra liked this.

“That’s a brilliant idea, but maybe you should bring two buckets.”

I ran this by Haley, our Huts Coordinator, and there was an explosion of emails, hazmat suits and calls to raise an army. Roland, who is the greatest guy in history, settled this down, and the plan was talked back down again to filling two buckets and waiting till it was warmer to do anything else.

Fearing that I’d have a hard go of it if things were icy, I grabbed the heaviest post hole digger I could find such that I could eventually defeat even the frozenest of turds. 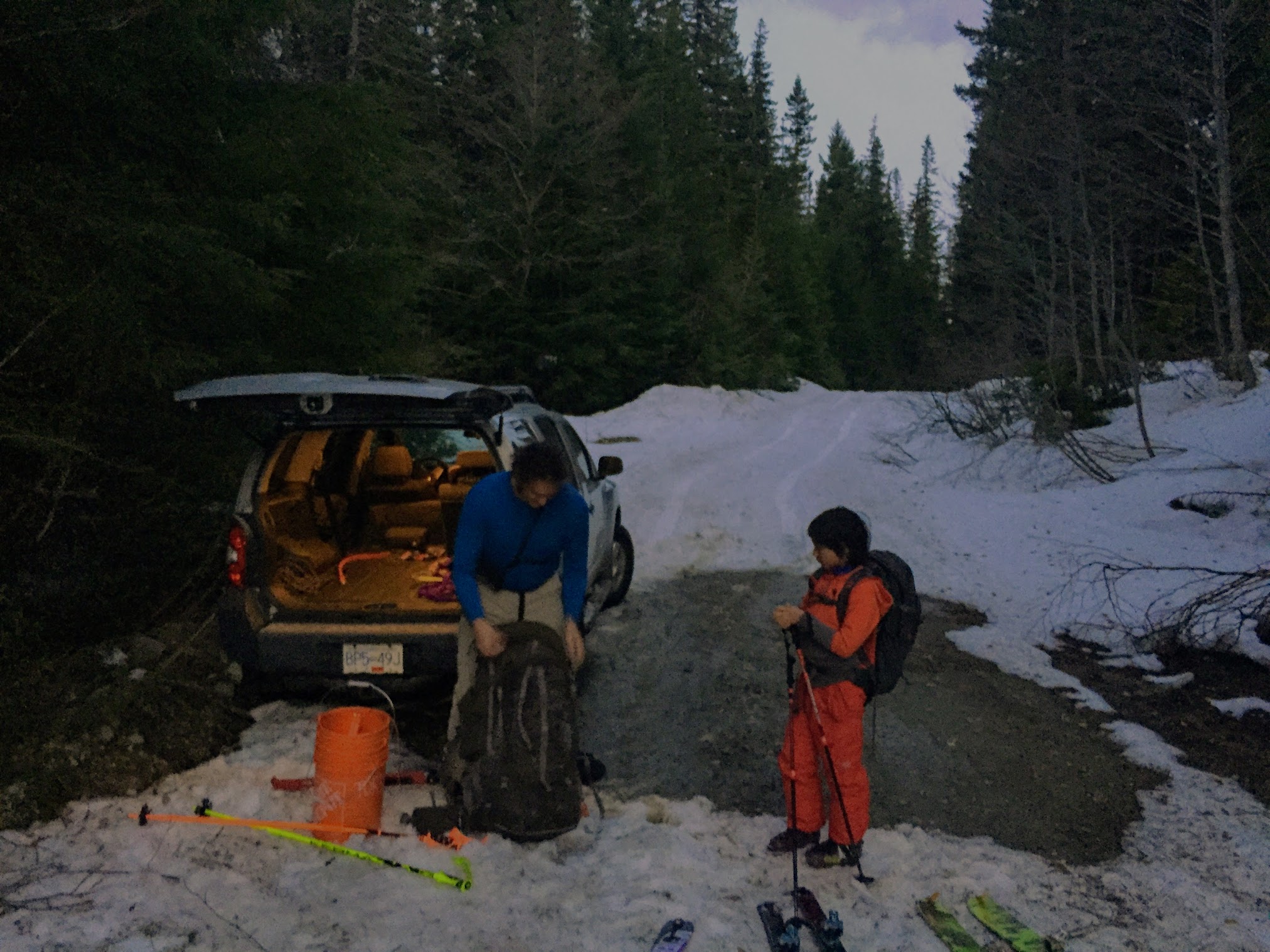 This trip report is way too long and we haven’t even left the vehicle yet.

Moving right along, we got ourselves up to the R200 junction, and it was clear that I should have brought the tent. We could have made it a ways further, but it would have been a bad scene. Devlin and Anita bivied for a bit while I zipped back to the truck and came back with the tent. 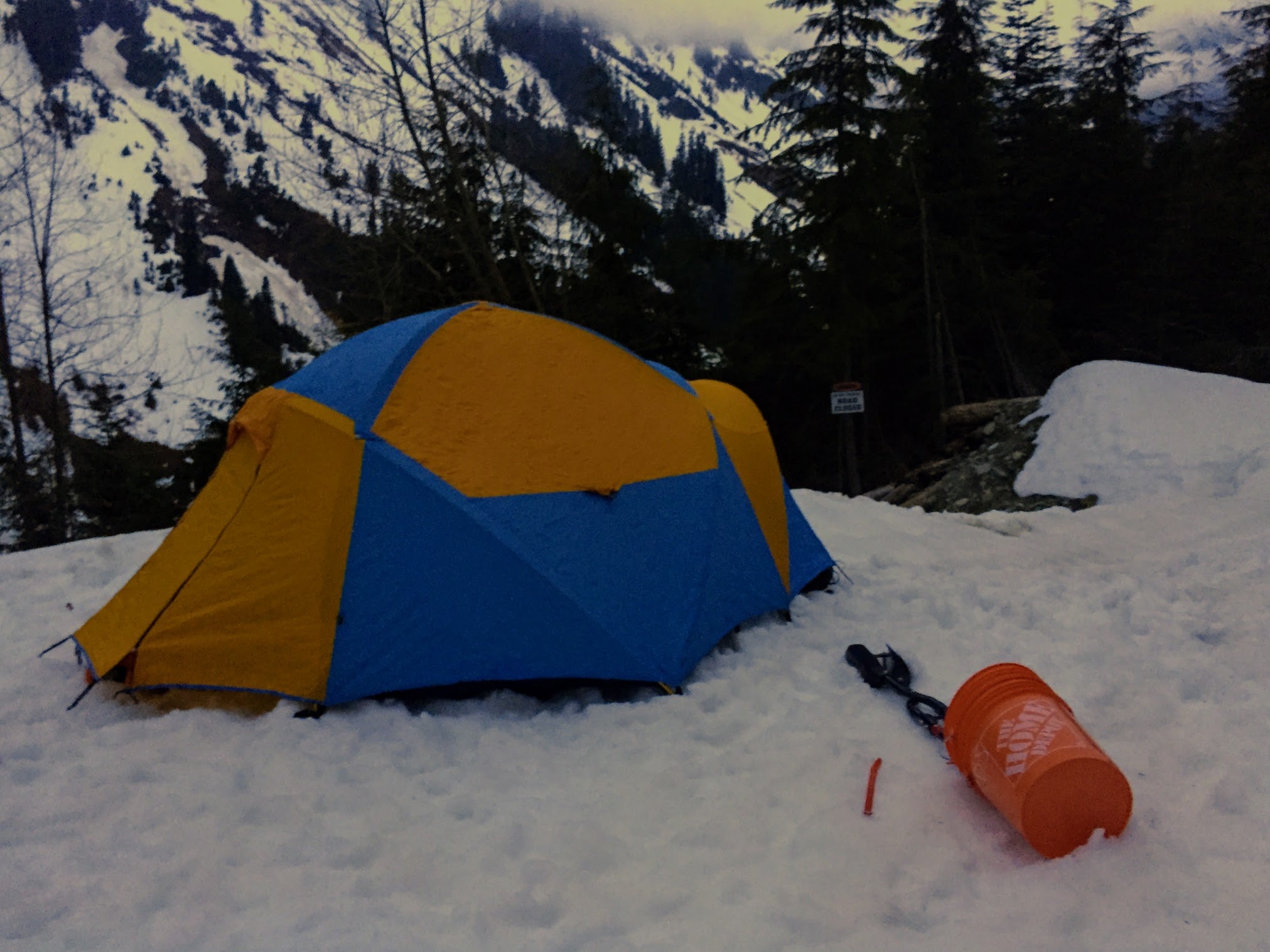 Devlin didn’t remember getting into the tent. He fell asleep outside and the next thing he knew he was in a tent.

On Saturday we got up and started slogging up towards the hut. Personally I would have preferred to have done it the night before, as the night before was clear and dry and now it was socked in and damp, but group morale was way better. 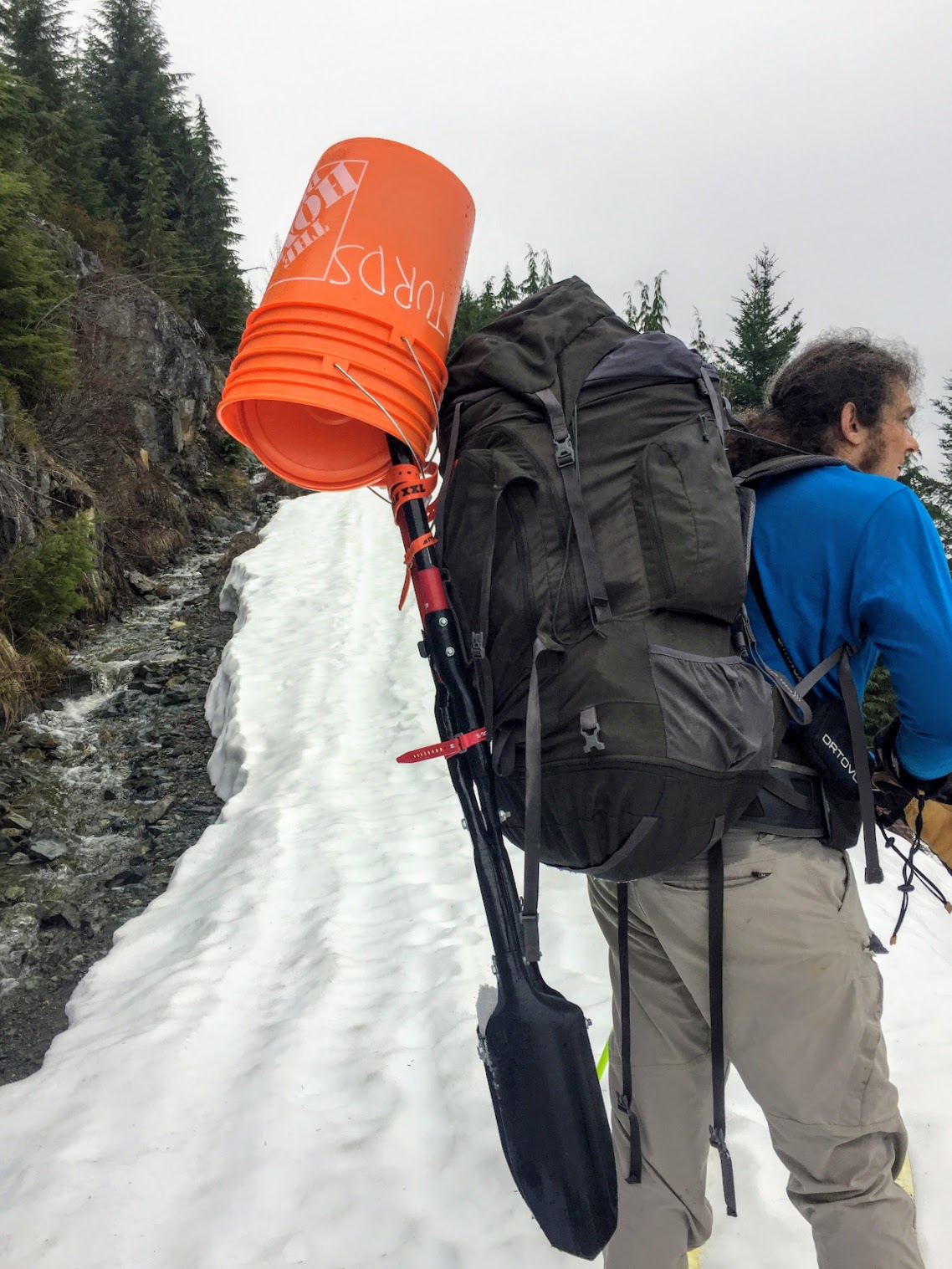 The post hole digger was pretty good at picking up a core sample of snow every time i put the pack down. 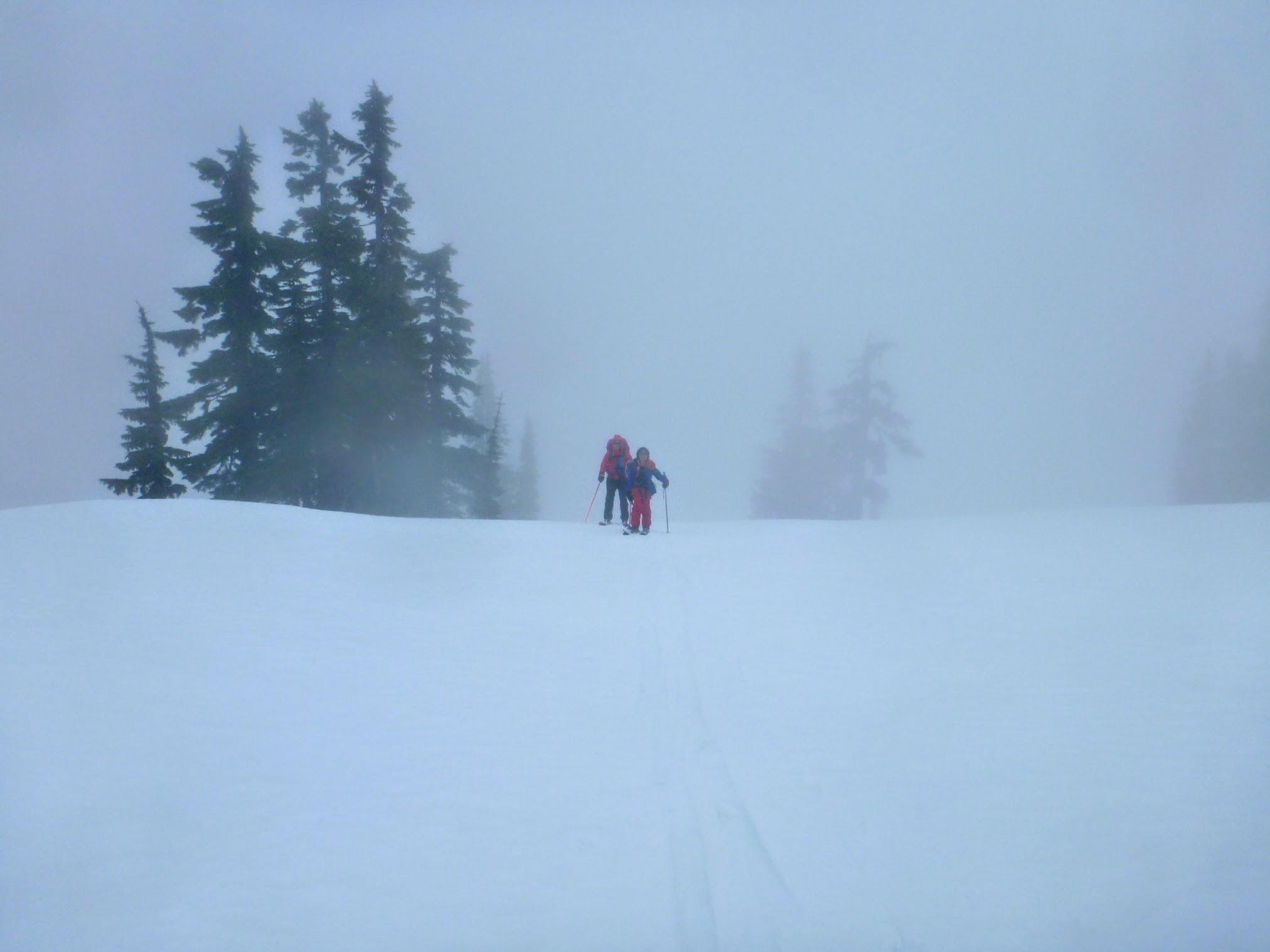 Anita and Devlin getting to the end of the marked trail.

As we were probably getting past Brew Lake, most likely, we were passed by Lucy Buchanan-Parker, Clemens and Kasia Adolphs, Birgit Rogalla and Anne Vialettes. We did the introductions and then they took off ahead of us. 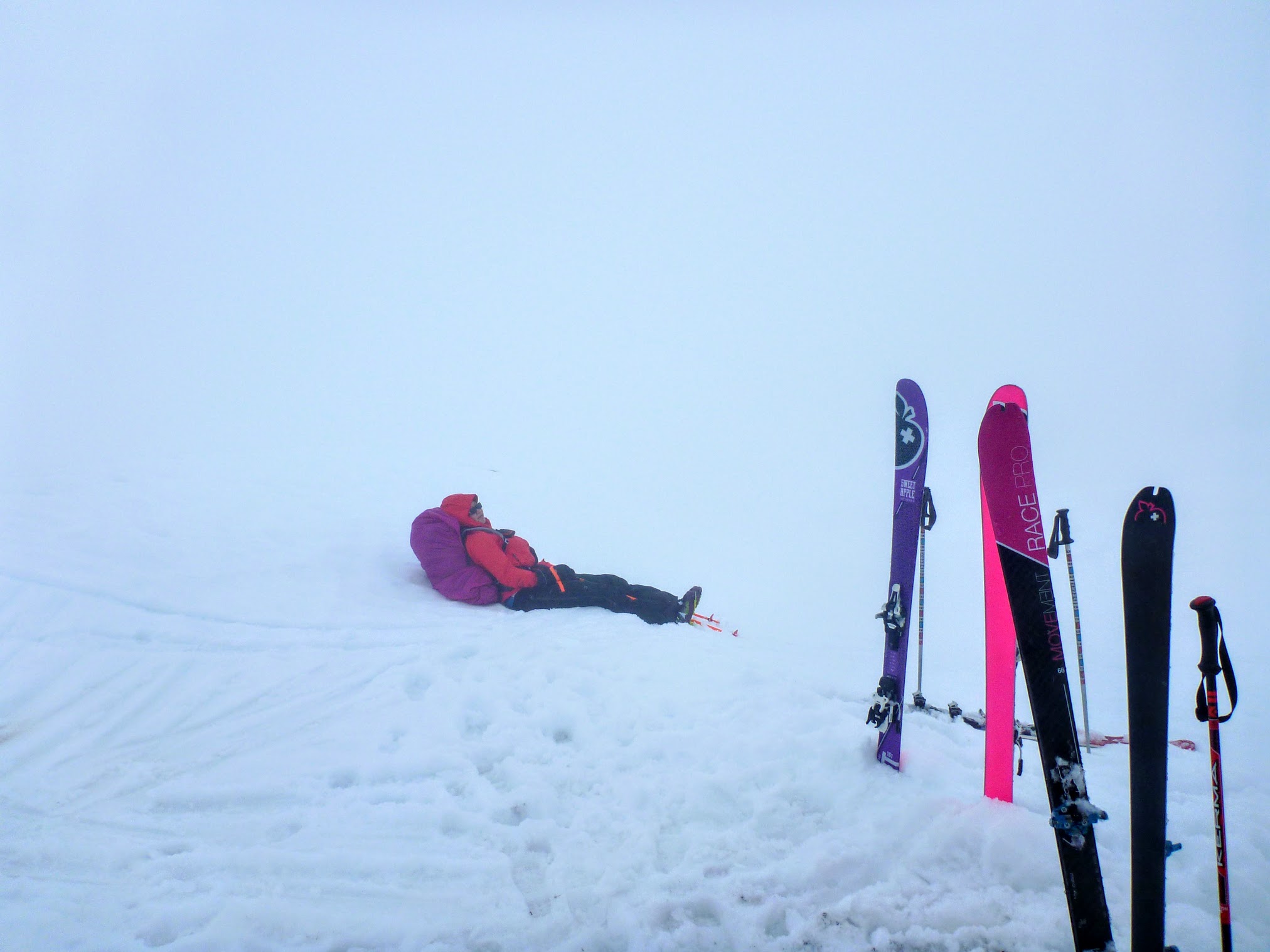 When we got to the hut, an exhausted Anita beached and asked that I take a picture of her lying there so that she could remind herself why she was never going to do this again.

I was keen to make use of the post hole digger, so I went to work while Devlin got Anita to play crib. All the good, seasoned VOCers in the hut offered to help with the outhouse.

“They say that three’s a crowd, but in an outhouse it’s really two.”

Everyone laughed except for Lucy because I’d already used that line when she offered to help by email. I was acutely aware of my own lameness.

In my joke-recycling shame, I took my post hole digger and the buckets to the outhouse and discovered that someone had left the door open, so before I could do anything about the poo, I’d have to do something about the snow. I went back to the hut, got a shovel and stared digging. As I threw a shovelful over my shoulder, it became apparent that someone had pinched a loaf on the door sill.

After dealing with that, I got the door fully open and got into the outhouse. Excavating that was interesting. There’s currently a paint can there for burning toilet paper—which I think is a practice of questionable merit—but if we are going to go that route, I’m all for getting a stainless steel bucket. It was filled with snow, so I dumped it out to discover that it was filled with half-burnt paper and poo, so I did my best to shovel it in again. It was now super rusty, and the rust turned everything it touched brown. The probe (used by people to poke the poo and see if it’s still frozen before starting to really dig) hadn’t been wiped off, and was also turning the snow brown. It was disturbing how difficult it was to distinguish between the probe snow and the snow that touched the can.

After ejecting all the brown snow, it became clear that the frost that forms around the toilet seat had bridged across to cover the hole and some out-of-the-box thinker had just dealt a deuce on top of the frost. I attacked it until it broke free and fell into the cavernous void below. I think the work I did was good work, but it was disappointing that I’d brought the post hole digger and buckets up there for no good reason. 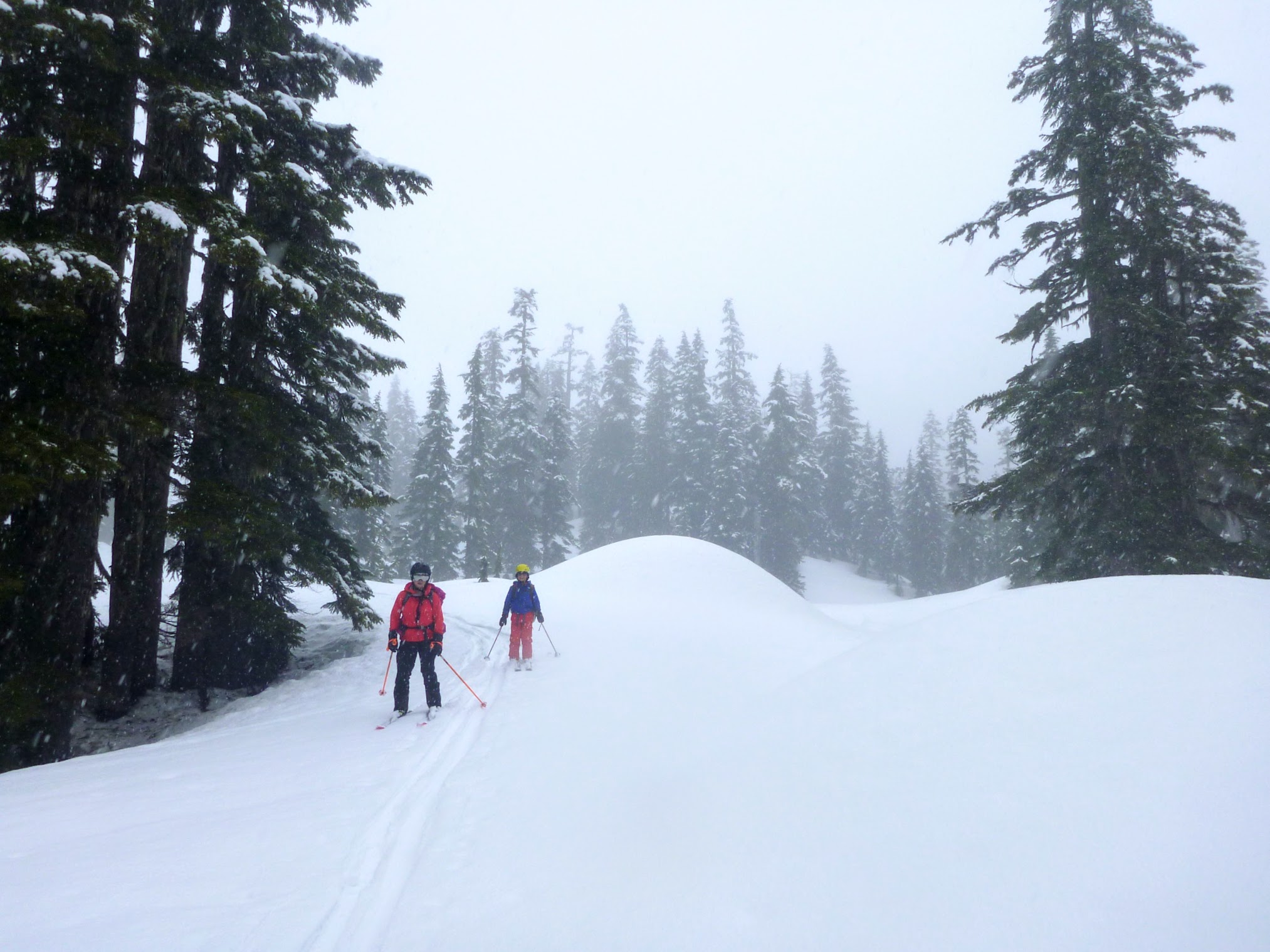 The way down on Sunday wasn’t exciting–Anita skied most of it and walked a bit, but for the most part the pace was not ridiculous.

When we got to the truck I asked everyone to keep their snow stuff on in case the truck got stuck, which of course it did. I put on the chains, which got us further, but also dug a big hole such that we were resting on the frame.

Tirfors are great. Here is a video of some dude with a medium-sized tirfor dragging a tractor around even though its wheels are locked.

I have a small one, which is plenty for getting a civilian vehicle out of trouble. While I was setting up, this random dude in a truck showed up at the top of the hill and offered to get stuck in our way in an attempt to help us. I told him I really didn’t want him to do that and he didn’t want to either, but he seemed socially obliged to do it anyways. Eventually I just told him that I really wanted him to go away and not try to come down the hill, and he thankfully obliged. We spent a while pulling the truck out of holes in the snow, trying to drive, thereby making new holes, and pulling it out again. We did this until we didn’t have to do it anymore. The tirfor is stronger than I am stupid.

Then we went to Mag’s again before heading down to the airport.

That’s not a very exciting climax, but real life doesn’t usually have a climax at the end of the story unless you fudge things.