Easter limping out of Phelix Hut

Easter limping out of Phelix Hut

The day I heard that there were mountains named after Lord of the rings characters, I knew that I wanted to go there sometime. Luckily Robert Lachance organised a Skiing trip to Phelix Hut in the beautiful Tolkien mountain range and let me come along even though I just learned skiing this year.

So on Good Friday I got picked up (very) early in the morning, slept through most of the ride (apologies to Nick Hetherington) and met the rest of the group in Pemberton to caravan up the icy road to the Phelix creek FSR. Luckily no one hit the deer that jumped in front of the cars. At the FSR Adam Stich and Jake Blanco with their trucks and Nick with chains on his car were confident that they could make it up the unploughed road to the landslide, so everyone loaded all the packs on the trucks and crossed their fingers. Unfortunately the journey ended after about 3 meters when Adams wheels lost grip despite all of us cheering for him. So everyone unloaded the packs again and started skinning up the trail in the morning sunshine. Close to the landslide Lina and Nick, two former VOC members, passed by. 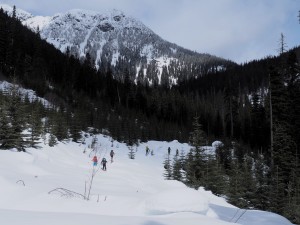 The conditions were very good for the ascend, the weather was good but not too warm and sunny and the snow was just sticky enough to skin easily but not stick to the skins at all. Keeping a moderate pace with some lunch and snack breaks after about 5.5 h I saw the Lake and the beautiful face of mount Gandalf for the first time. I slowly crossed the lake to enjoy the view before meeting up with the others inside the hut. 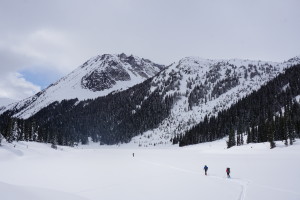 Crossing the lake to the hut. Photo: Nick Hetherington 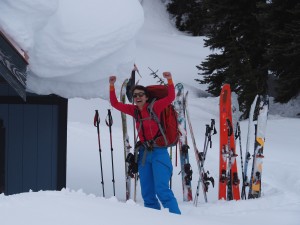 Golnoosh made it to the hut. Photo: Verena Engel

After relaxing in the hut and one well deserved afternoon beer for my fellow german Martin Lohmann most of us decided to head out to ski. A group of four went over to cabin hill, while seven others and me wanted to check out the Northwest Knob. Shortly after we arrived at the scarp of Mt. Gandalf to the west of the hut. Some of the others suddenly turned around and pointed south towards the col between Mt. Frodo and Peregrine.I could only see the crown line of the avalanche that went down on Lina and Nick. 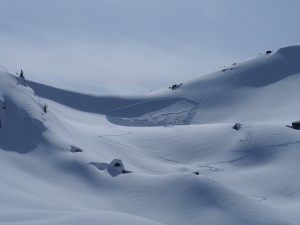 So far away from them there wasn’t much we could do, so we observed them and were happy to see them both moving around in the debris before we lost sight due to a cloud. As soon as the cloud had passed by, they had already skied down the mountain and started skinning up again. So we started skiing down the Knob through heavy wet snow the same way we came up and almost everyone fell several times trying to turn. It got a little better in the trees, so we had a good time and laughed with each other when we fell over and cheered for each other to get up again.

Back in the hut everyone prepared dinner and had a good time. After a while Lina and Nick returned alive and well and claimed that their 40 m ride downhill on the avalanche wasn’t a big deal. Later that evening another group of three VOC members arrived and we grabbed the songbooks and sang until late (10 pm) in the evening while Nick played the guitar. Then we went to sleep after brushing our teeth under the bright full moon. 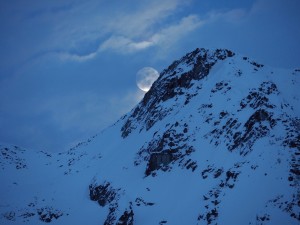 The next day we split into groups again. While some people went to the Return of the King and Cabin Hill, Robert Lachance had organised a group to ski Aragorn Glacier. While that would have been amazing I changed my mind and I wanted to try to get to the top of Aragorn mountain together with Adam and Jake and maybe ski the glacier afterwards. So the three of us began the ascend in the morning shortly after the glacier group left. 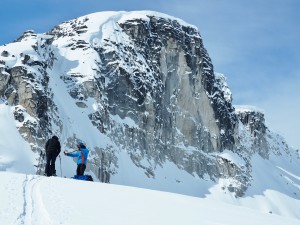 Lina and Nick passed us again on the way up and kindly broke a very good skin track for us, so we caught up with Roberts group on one of the lakes below Aragorn mountain. At that point we split up again and Roberts group headed towards the glacier while we headed north trying to find a way to cross the ridge behind the glacier and get to the mountaintop. The closed we got to the saddle in the ridge we deemed safe the more scary it looked and after long faff with maps and GPS we gave up on that plan and enjoyed the view instead. At the same time Roberts group caught up with us because the glacier unfortunately was also inaccessible. 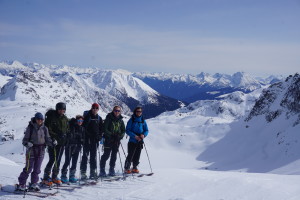 Instead we all had lunch on some rocks with a breath-taking view of the mountain range and an unsuccessful attempt to boil water for tea. 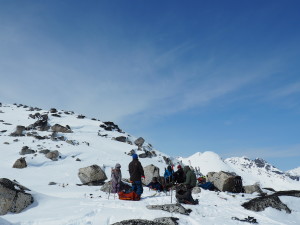 Lunch and no tea near Aragorn peak. Photo: Jake Blanco 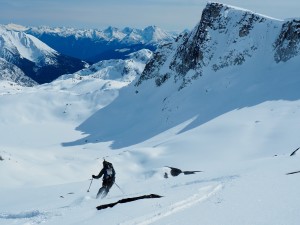 Afterwards we began the ascend and had some nice skiing along the ridge to Mt. Shadowfax for a while until we hit the first trees. There the sow became icy at first and then heavy and wet for a while. When I tried to make the first turn through the wet snow my right ski got stuck and both skis drifted apart underneath me so I eventually landed face first between them with my left leg twisted outwards. At first I thought I was fine but soon I realised that I couldn’t stand up on my own anymore. Luckily Robert was still behind me so he helped me get out of the skis and stand up. I noticed that even though I didn’t feel a lot of pain at first I had only very little stability left in my knee, so skiing was no option. Robert and I put on the skins for my Skis and I started going down the hill very slowly. Adam and Christine Beaulieu were waiting for us a few meters away and helped me get down the hill by scouting ahead which way the easiest for me to take was. I basically went back and forth along the steep slope with a lot of sidesteps. The only way for me to turn around safely was to lie down and swing the legs around one after the other very careful not to bend my knee inwards, as that was very painful. I lost track of time but it took a long time to get down to the hut. Near the end I was so exhausted and frustrated that I just wanted to burst into tears, but Christine, Adam and Robert encouraged me constantly to keep going and pulled me off the ground after my turns. I can’t thank them enough for that.

Back in the hut everyone was very helpful and tried to make me to be as comfortable as possible, got snow to reduce the swelling and made plans for me to get home on Sunday. We postponed the decision to call a helicopter to the next morning because with a good night of sleep I was convinced it should be possible for me to get back to the cars on skis and skins. After dinner and a good amount of chatting we all went to bed.

The next morning it snowed, and visibility was low, but some of the others went to ski the Return of the King and Cabin Hill in the morning before heading out to the cars anyway. Well rested I decided I could make it down to the cars on my own feet. Tom Minshull’s suggestion to build an emergency sled with my skis was tempting, but as no one really had experience with that I didn’t want to try that on the steep ski-out. But I did take the offer of distributing most of my stuff in the group and additionally Una Trivanovic professionally mummified my leg in tape to support the joint.

Then Golnoosh Samei, Martin Lohmann, Quentin Chalmers, Verena Engel, Justin Mayne and I began our very slow descend. The section through the trees went considerably well and the fresh snow made it a lot easier. With a ridiculous amount of sidesteps and a lot more painful lying turns we made it to the trailhead in about three hours and had a short lunch break there. Again, a huge thanks to them for sticking with me and to everyone who carried my stuff.

After a short while on the FSR my car group Nick, Hannah Bates and Chris Barry caught up with us and accompanied me for the rest of the trail, so the others could go ahead and drive home. 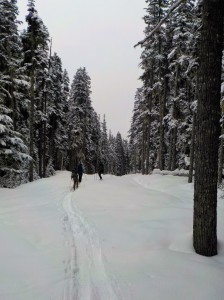 For a long while I was fine getting down the FSR on my own but shortly after the second bridge the path got just to steep to go straight on skis and skins without accelerating. Of course, I realised that too late and almost ate it again because I couldn’t hit the breaks with just one leg to really put weight on. At that point Nick had the amazing idea to just snowplough in front of me with me holding on to his backpack and skiing straight. As this is quite tiring Nick, Hannah and Chris did this alternatingly until we got back to the cars in one piece after about 6 hours from the hut in total. A huge thanks to Nick, Hannah and Chris for helping me.

Overall I had a very exhausting and painful but also amazing weekend and a few weeks and little bit of limping with crutches later I am nearly fully recovered again and am positive there is no permanent damage.

Big thanks to Robert for organizing the trip and to everyone on the trip for helping me.