VOC Europe is a loose collection of VOCers who left Canada and wish to bring the VOC spirit to Europe (example trip). Join our facebook group or write me (Tobias Klenze) a message: [email protected]

Skiing with a view

Good overnight trips need only a few ingredients: a great location, great people, and a great camp. Already the first was a challenge for our New Year’s trip: while there are plenty of Swiss huts, almost all are fully staffed, include luxuries like cooked meals and cost around $100 per night. It was clear that we would not go for this option. After unsuccessfully trying to find an unserviced hut with nice ski touring options, we decided to snow camp on a mountain in the Safien valley in Switzerland. It turned out to be a great location for our adventure. 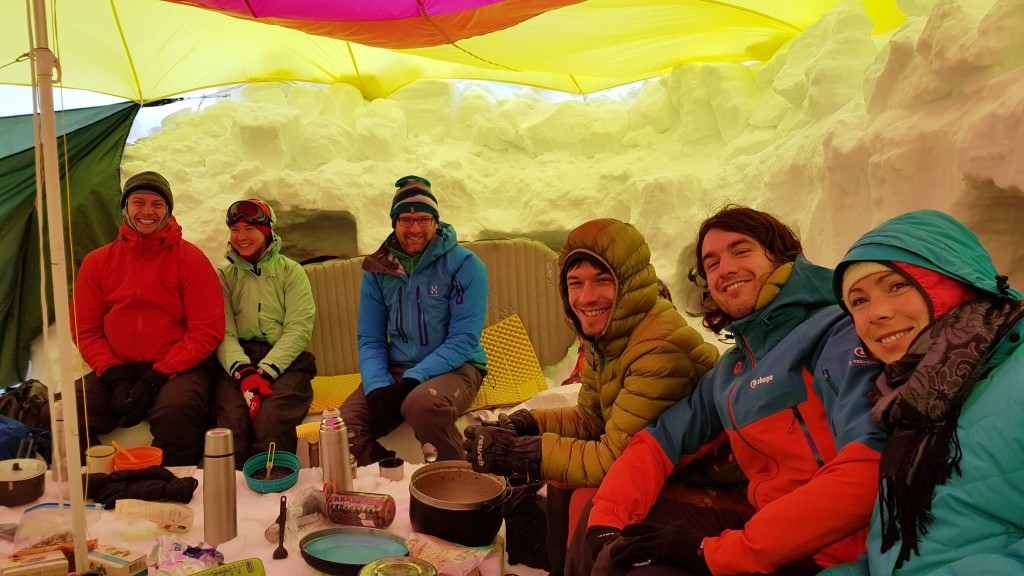 Happy Faces in the Snow Camp

We somehow convinced 14 people to join our trip (many more than last year), among who were VOCers Flo, Steffen and myself, and ‘unofficial VOCers’ Silvano, Jeremias, Robert, Angelique, Philipp, Sarah, Sam, Andy, Oscar, Alina and Chris. Anyone who volunteers to snow camp at 2,500m in late December probably has a good attitude, so finding great people was taken care of. But how about the last point, a great snow camp? Some of us planned to stay for up to 5 nights, and it was clear that we would need a shelter for cooking and spending the long evenings together. How do you find a tarp that’s big enough for 14 people? Flo’s suggestion: use a retired rescue parachute used by paragliders. 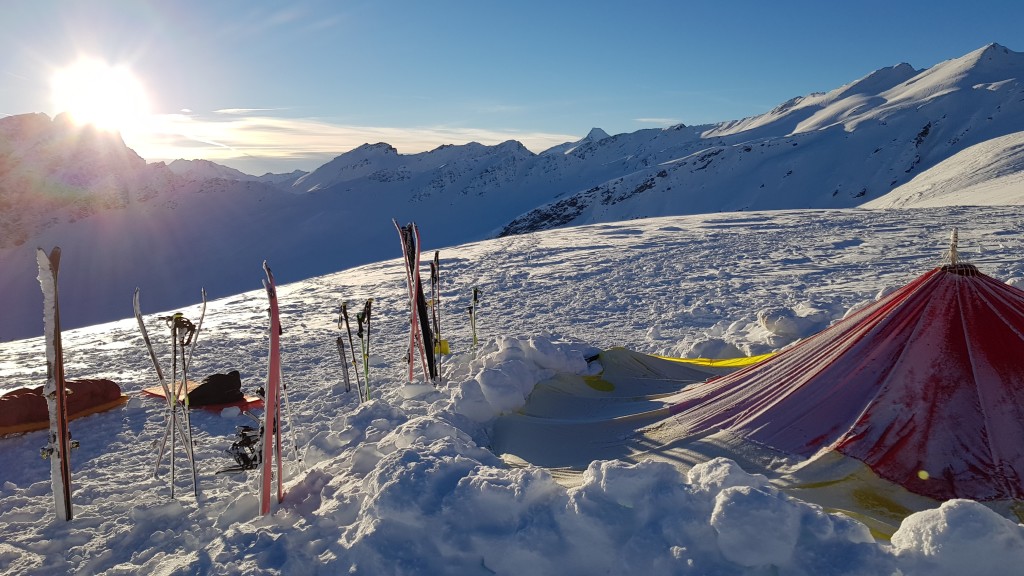 Our group camp. This was on Day 5, lines were not as taut anymore.

The parachute allowed us to build an amazing camp: big enough to comfortably fit everyone, and ventilated, yet warm. Most importantly, it provided protection from the strong winds that were forecast. Four of us went up on the 28th, and by the time that seven more joined on the day after, our camp was finished. Some slept in the big camp, others dug snow caves. 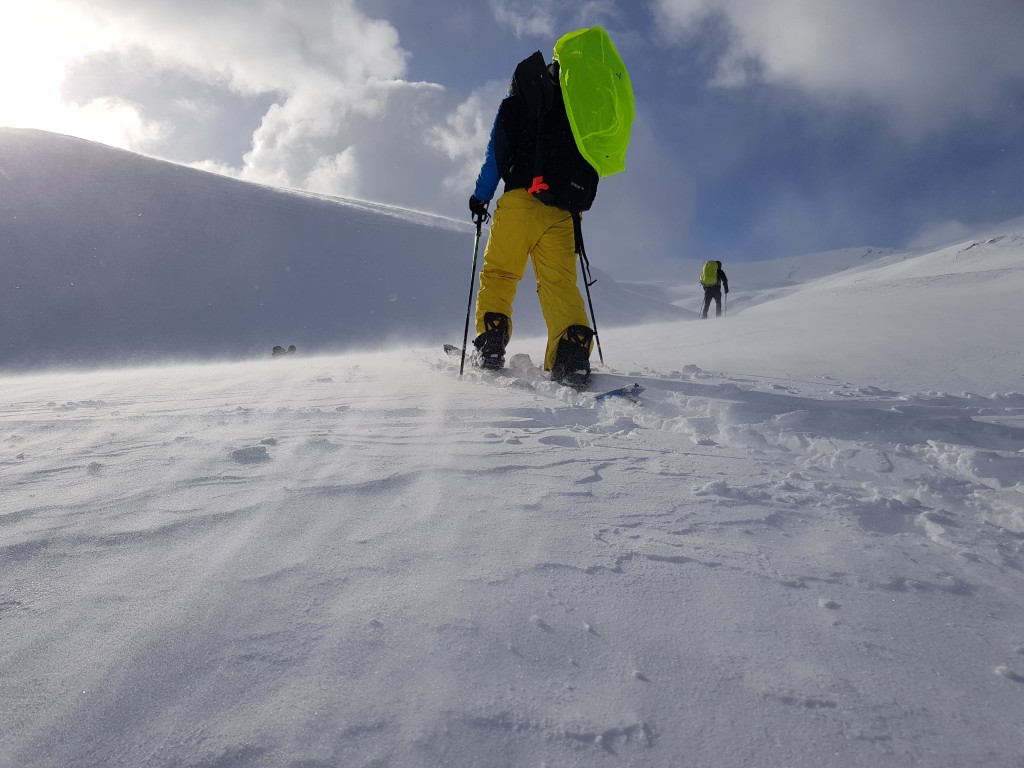 Snow drift was a constant issue. At least it provided for great pictures on the sunny days.

Everything went well until the morning of the 30th. A raging storm tore out one of the lines. The damage was quickly fixed and the roof reinforced, but morale was at a low point. The forecast was for the wind to persist for several days. Some people decided to seek shelter at lower altitude, where winds would not be an issue. Meanwhile, a couple of us skied down, where Chris joined and we headed up with more supplies in our backpacks to re-stock the camp and bring up wine for New Year’s Feuerzangenbowle. Half-way up Flo came down to warn us that conditions on top were bad. Given that daylight was running out, we decided to abandon the idea of sleeping at camp, and instead headed for the mountain hut in the valley. 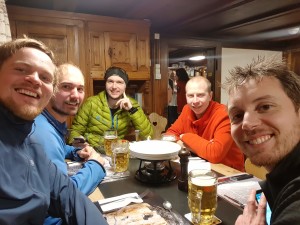 The next morning things looked a lot better: despite it being windy, the sun peaked through the overcast sky occasionally, and when we got to camp we were relieved to see it in once piece. With a boasted confidence of our tarp’s toughness, we decided to spend New Year’s at camp despite the persistent presence of wind warnings in the forecast. Rather than getting stronger, however, the wind got calmer. Sharing delicious meals, and drinking Feuerzangenbowle together we were finally cheerful again. The new year came, and spirits were high enough for every single one of us to take a naked lap around camp under the crisp, clear star lit night sky. What a place, and what a way to celebrate. 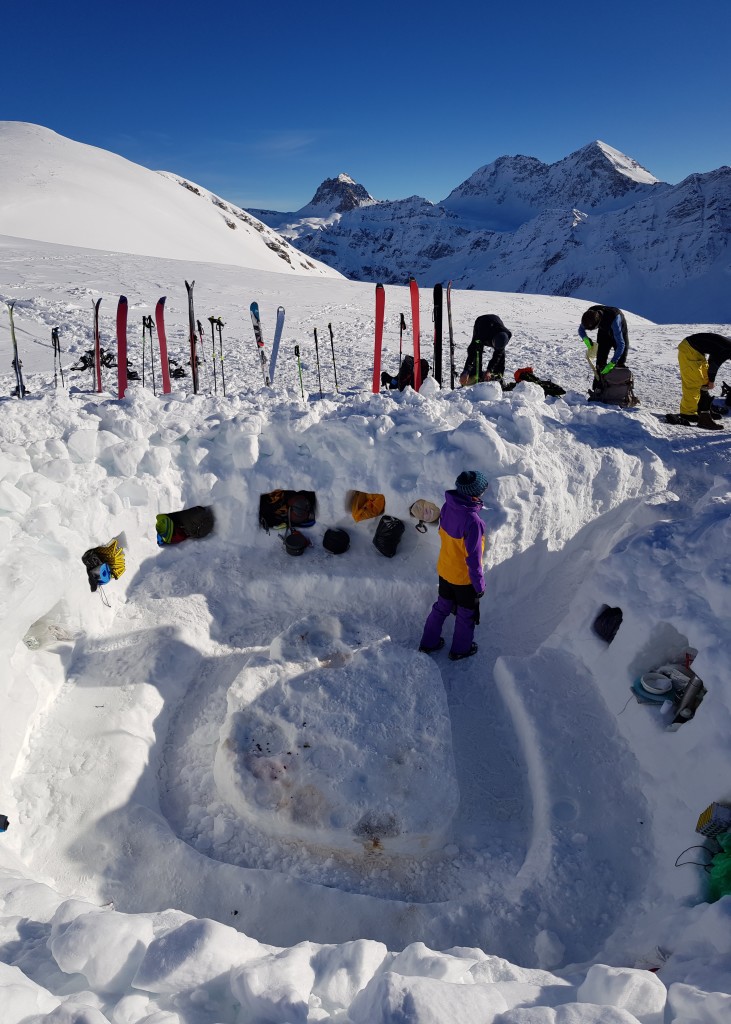 Camp after we took off the parachute. It provided enough clearance for people to stand on the bench without touching the roof, and was outfitted with a kitchen table, a fair-weather outside kitchen, benches and lots of storage compartments.

Epilogue: The next morning was nice weather, despite being windy. We took down the tarp, did a small tour with our day packs and then descended down to the valley, as the prospect of 110km/h wind gusts for the following day scared away even the most avid winter campers. Despite leaving a day early, we all felt very lucky to have made amazing experiences, at such a beautiful campsite with such great company. 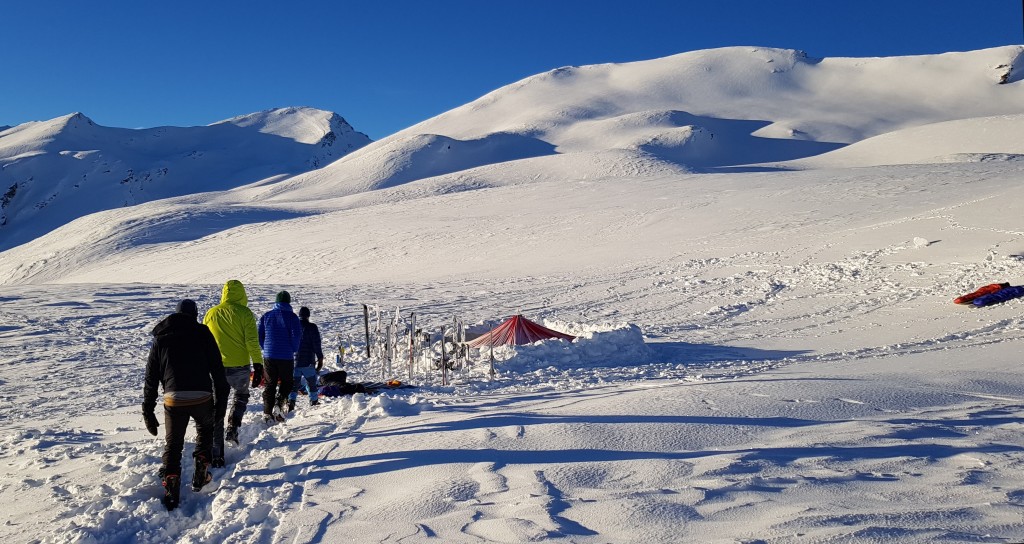 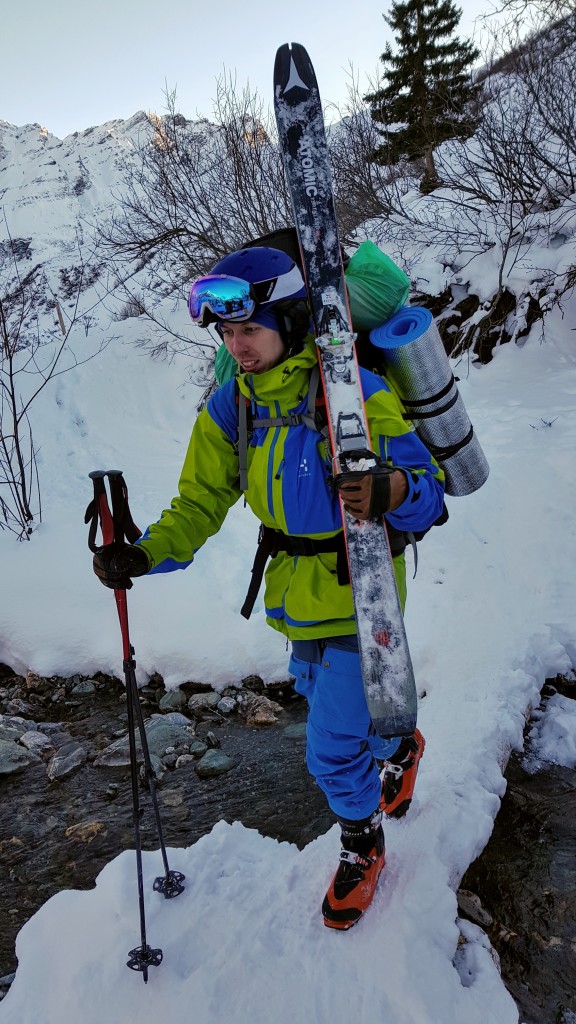 Creek Crossings, Europe Style. Yes, there is a bridge for even this tiny creek.