A Beginner’s Birthday in the Backcountry

Never having been on a backcountry ski trip before, I have no points of reference on how these things go – so excuse any presumptuous writing on my part. D

The rain was cold as I trudged down main mall in the dark. Three hours after climbing into bed and even fewer before hitting the trail, I was questioning whether staying up until 3am the night before to celebrate my 19th birthday was worth it. (I think it was).

Skis on packs, packs on backs: we walked up and out of the Diamond Head parking lot around 8:30. We were lucky to start skinning within the hour, making for a relatively easy climb up to red heather – at least in the moments that we weren’t awkwardly sidestepping little streams that seemed to have some serious resentment for uninterrupted snow. The beginners were sorting out gear; tripping over split board edges and falling over their gloriously free heels (myself included). 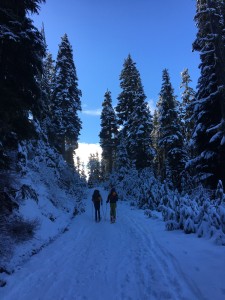 My shovel-handle detached itself from my backpack at some point on that initial track – and with my dedication to not noticing things, conversation amongst those who found the handle continued to the point that Ross still thought he was halfway to a new shovel by the time he left us that night.

At red heather, the fast group moved out ahead of the relaxed group (not slow group, thanks very much). Admittedly, strapping on the avalanche beacons, for a beginner, brought on a mood that was much less then relaxed – our deliberations on moral philosophy (and the implications of taking the non-winter route without everybody having beacons and training) continued back and forth until we were informed by other skiers that there was no snow on the winter route (an easy decision there forward). 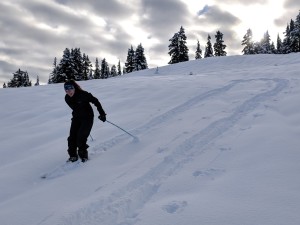 “Look ma, I’m doing it!” (Sophie trying to get some speed on the way up) 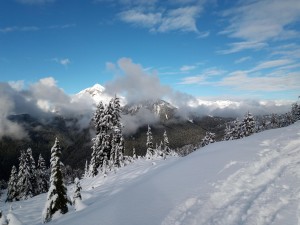 Columnar and Atwell poking out through the clouds (Photo: Birgit Rogalla) 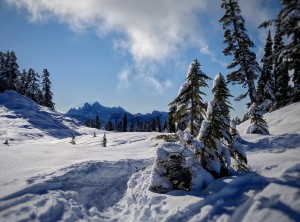 It was just after our problem of route selection was solved that we encountered another: my skis. The two screws at the top of the left binding came clean out of the ski; as their holes stripped. I blame Alastair; the only person I saw touching those bindings before me*. Screwing the screws back in held for another few hundred metres before the problem repeated itself. Luckily Vincent was on hand with his Leatherman and a roll of wire to make my skis feel good as new! We took our time getting to the Elfin Lakes campground; squeezing in a mock beacon search, and one tiny lap (off the ridge below the tent platforms) before we lost all daylight completely. 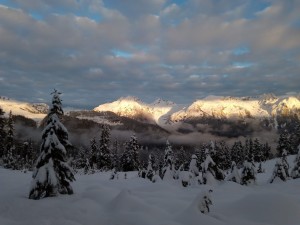 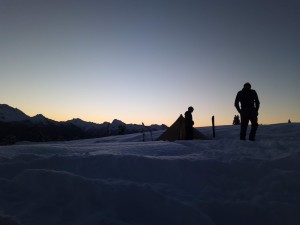 The humps of tents silhouetted themselves against darkening sky. Stars flickered into view over the lake. Inside the kitchen, the roar of whisperlites and din of conversation formed a backdrop to warm food and sweet mulled wine (a perfect birthday dinner if you ask me). Ross left for Vancouver after dinner while the rest of us headed for our tents. Early nights seem to be in order after a day of skiing.

Side-note: As I climbed into my sleeping bag, my tent/stove-mate Ethan remarked on how small tents were (and admittedly my 2 person backpacking tent is tiny). It was in that moment that it hit me that for some, this was a real beginner’s trip. HUGE shout outs to Ethan, the true beginner amongst us, who braved a snowy December night for his first: (a) time in temperatures below 7ºC, (b) time skiing, (c) time sleeping in a tent. That deserves an award! And Special thanks to Pat Duffy (VOC President 1953-1955) for providing Ethan with winter camping gear.

11 hours later we were awake again and warming our faces a yellow sun rising over white mountains, painting over the pink wisps of morning light with a crisp blue. Oatmeal eaten (and in one unlucky case spilled), cook house cleaned, and tents taken down, we were back on our skis. With, miraculously, Ross again part of the group (he’d driven all the way back to Vancouver, slept the night, found out he didn’t have to go in for work, and driven/skied all the way back to us before we were even done our breakfast). 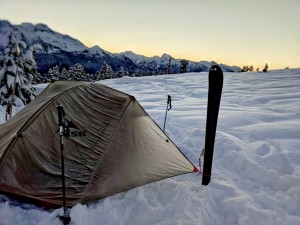 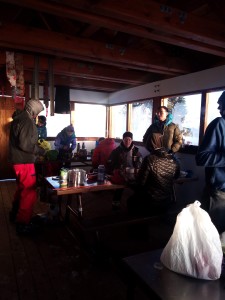 In true relaxed form, the relaxed group started heading for the car park, hoping to stop for a lap or two on the way. We got in one gentle lap that was marked by more gear troubles: Sophie’s splitboard would un-split (re-board?); my binding came off again; Alex’s skins wouldn’t stay on his skis. 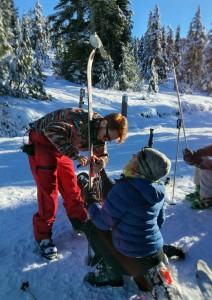 Birgit and a whiskeyjack helping me with my afternoon ski repairs (Photo: Sophie B)

Meanwhile, the fast group headed up towards the gargoyles for a few laps in the soft snow. Up near the gargoyles (Photo: Felix Brechtmann) The full group reunited hours later at red heather, and finished the ski and then hike down, just as the sun disappeared from the sky. 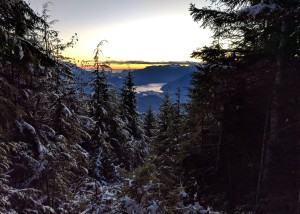 Views of Squamish when walking back to the cars

Special Thanks to Birgit and Vincent for putting this trip together and introducing a bunch of novices to this wonderful winter world!

The photos were a collective effort on this trip – thanks to all who contributed! All photos not credited are mine.

One Response to A Beginner’s Birthday in the Backcountry