After a bunch of people dropped in and out, venues changed and emails flew around, Devlin and I ended up by ourselves in a snow cave on a Friday at Red Heather, with the rest of our party arriving the next day. 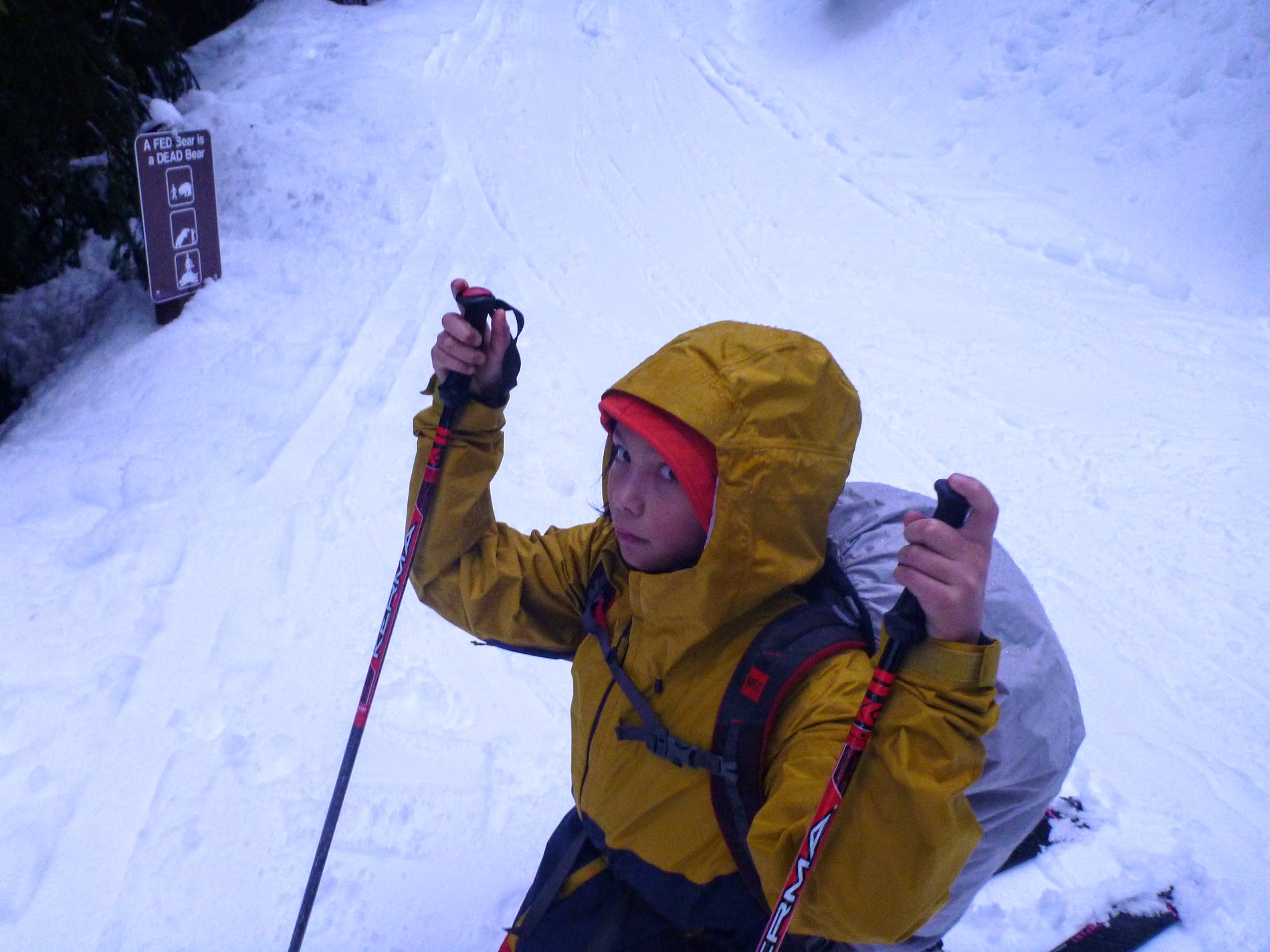 Dusk falls on the lonely. 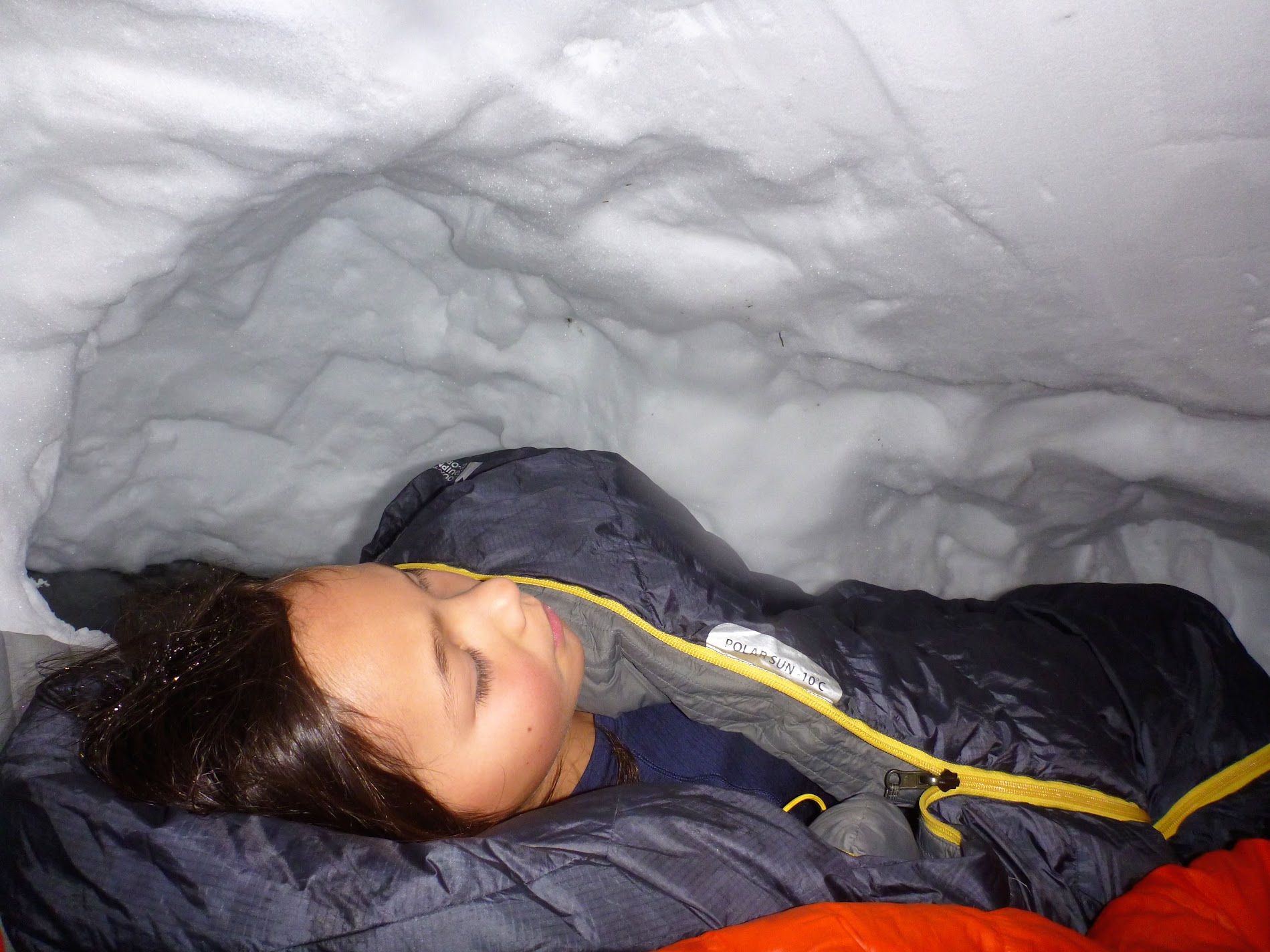 On Saturday morning Devlin got up and went to the outhouse. As I was getting out of bed, I heard an anguished wail and ran out of the snow cave to see what the deal was.

Devlin had dropped his mitt down to the briny depths of the outhouse.

The thing about kids’ mitts is that they’re just awful. Some of them have the little pouches to put hand warmers to make up for their lack of decent insulation, but none of them just have good insulation or are built to really last. This year Devlin finally grew enough to take extra-small women’s mitts, which are a totally different ball of wax. There’s tons of good women’s mitts out there. I’d paid for the warmest I could find a few weeks ago, so that I wouldn’t have to worry about cold hands on trips anymore, and things were happy. They still seemed brand new. I did have a spare pair for Devlin with me, but it pained me to lose the good pair, so I decided that I was going to rescue the mitt.

I took Devlin’s avalanche probe and mine to the outhouse with the plan to grab the mitt between the probe tips, chopstick style. There’s just barely enough room in the outhouse to get the probes past the seat and the outhouse floor without interfering with the top of the door frame. What luck, I thought.
Once I had negotiated the door frame, I ran into my next bit of trouble. Even with my most daring reach down, the probes weren’t close to long enough. Maybe everyone who goes to Red Heather should ditch their 2.4 m probes and insist on 3 m, on account of the outhouse. This would never be an issue at feeble VOC outhouses where someone digs until they give up, which doesn’t take long, but the yawning hole under the Red Heather outhouse was clearly dug with an excavator.

Pontificating about digging holes aside, I faced the reality that I was going to have to kneel to the throne to get the mitt back. I washed the rim with snow and toilet paper, pulled up my sleeves, renegotiated the probes past the door frame and down the hole and then forced my arms in until I couldn’t go further. It was gross. My shoulders were scrunched up, and I was jammed in hard, but the probes were not quite to the mitt.

I retracted myself from the hole and the probes from the door. I felt the shame. I had done what I had done, and it was all for naught.

Probably it was stupid not to have given up a long time ago, but I’m not the kind of person who gets outstupided by an outhouse. The BC Parks outhouses use these fibreglass toilet pedestals instead of a plywood shelf with a seat. This is wise (hint, hint, VOC exec) because it makes outhouse construction easier and makes all surfaces that might come in contact with bare legs and buns smooth and easy to clean. Maybe I could just lift it off. I tried wrestling with it for a while, but it wouldn’t move.

The outhouse was filled with snow because someone had left the door open, so it wasn’t obvious whether it was fastened in place or just frozen. I started kicking the snow aside and bumped into a buried shovel. This was a good, solid shovel with a steel blade and a wooden handle, not some lightweight snow shovel. I shovelled out the outhouse and found a half-inch of ice at the bottom, then I chipped out around the front of the toilet pedestal and started prying. It made some popping noises and started coming up. I was so happy. Then it stopped moving about halfway around, and I wasn’t happy anymore. There was one little, rusty Robertson screw on each side of the pedestal, and there are no Robertson screws on my skis and hence no bits in my tool kit. I felt kind of bad, but over the years I’ve fixed a lot of busted stuff and cleaned up a lot of messes in BC Parks, so I justified breaking off the screws to myself. The toilet is still going to work just fine, but with the screws gone some yahoo could take out the pedestal and end up falling into the hole. Since that yahoo would be me, I wouldn’t feel guilty and the worst that could happen is that I might learn something.

With the pedestal outside of the outhouse, it was easy to get the probes through and down the hole. I still had to reach down a ways, but I could touch the mitt with the probes without contacting the rim of the hole in the floor, which was rad. My chopstick idea was a dismal failure, though. The probes were smooth and bendy, plus they were long enough that I wasn’t able to generate any significant sideways force at the ends. I spent a while probing the mitt, proving again and again that it was not the path to glory.

The other ends of the probes have handles, to make it easier to hold the end of the probe when pulling on the cord to lock them. One of the probes even has this little plastic clip so that you can keep the tag end clipped to the probe. I’d previously thought that was an unnecessary and useless feature, but now it was clear that Ortovox knows something about making genuinely versatile probes. With the cord clipped safely above the poo, I put the handle end down and finagled it into the mitt. I got the other probe in as well, pulled apart as hard as I could, and triumphantly raised the mitt from the murky depths.

I even had a spare silnylon sack, so I wrapped the mitt up in that, put the toilet pedestal back and life was peachy.

I made breakfast, Devlin and I went up to Round Mountain to do a run, and then we met our friends coming up to the hut. On the way we bumped into the Veenstras, and once we were all reassembled at the hut, it was a kid party—Devlin, his friend Ben, and Christian and Line Veenstra’s eldest, were all up on hut roof rehearsing cornice falls and avalanches until all the snow was off the roof. Even after the snow was gone, they had a good time fumigating themselves with the smoke coming out of the chimney. 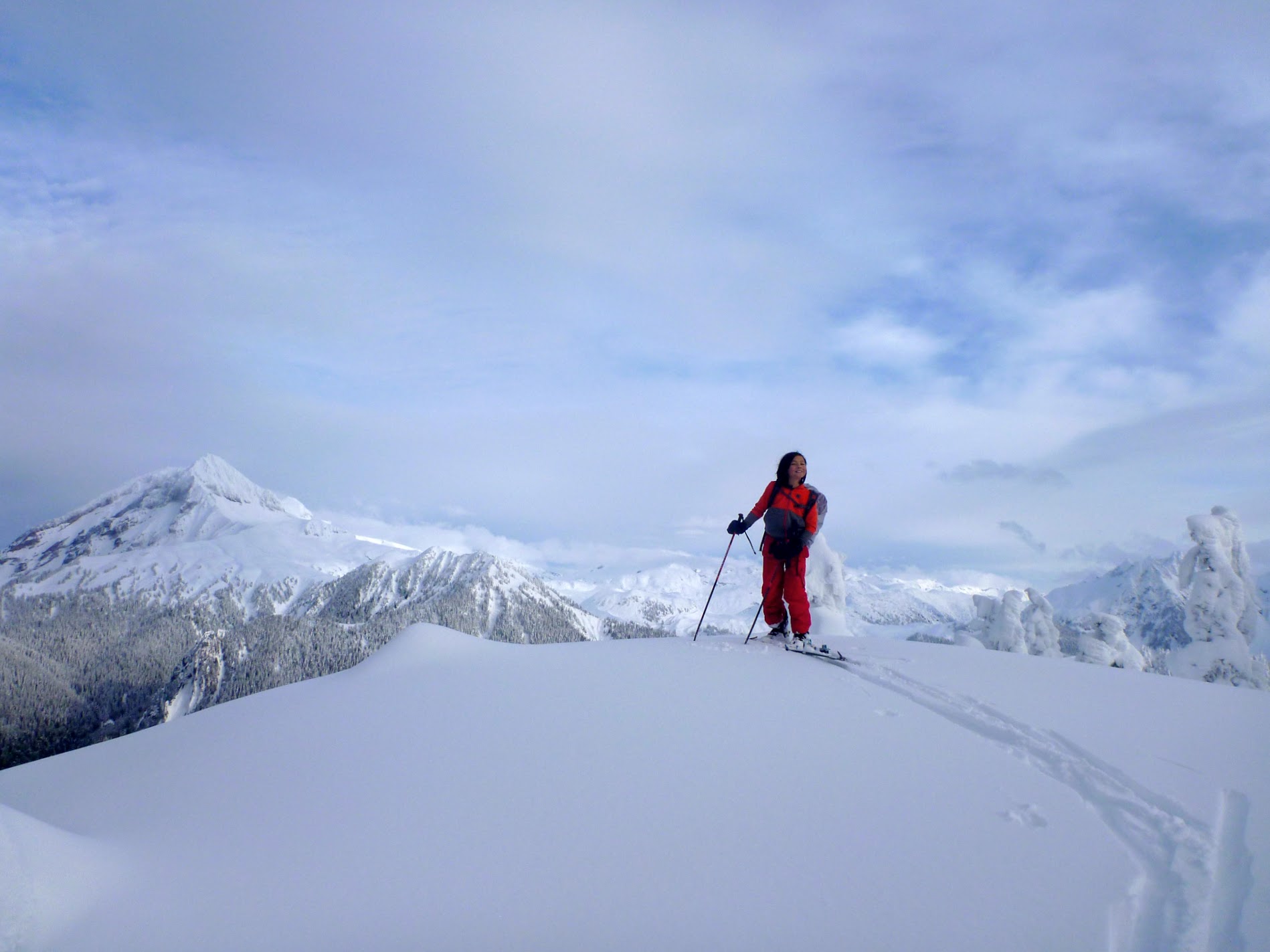 Top of Round Mountain. 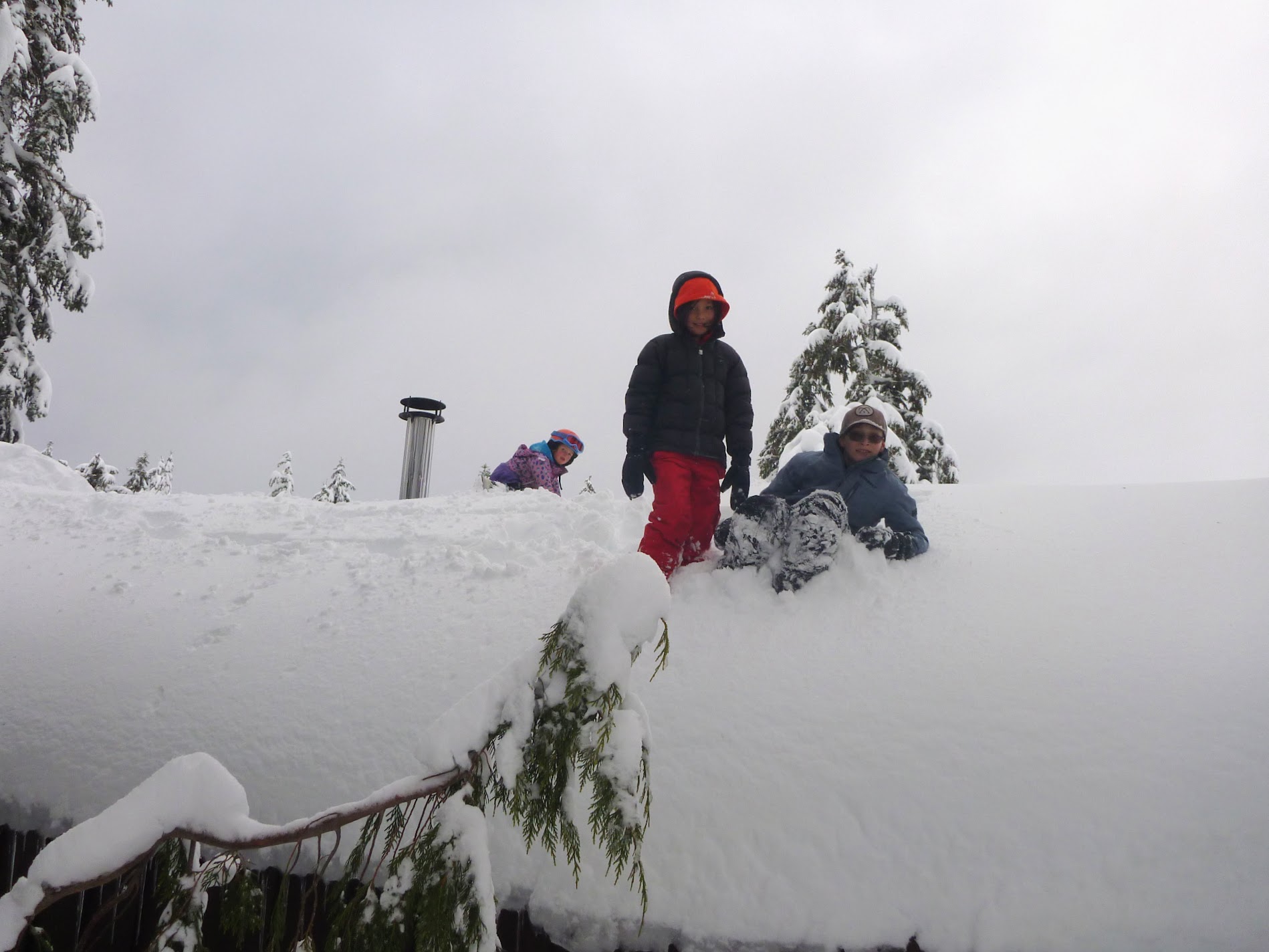 The moment before the cornice fall. 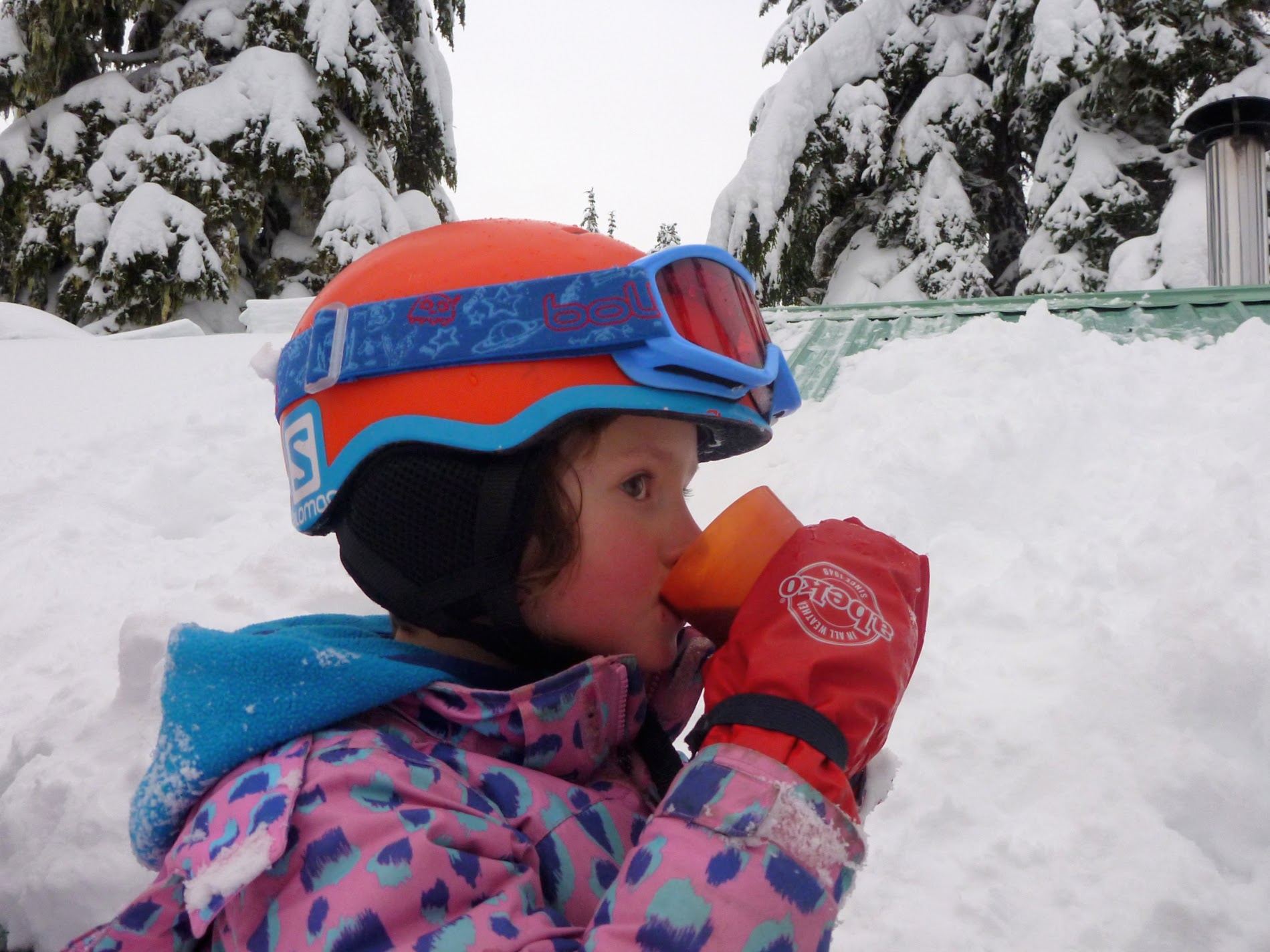 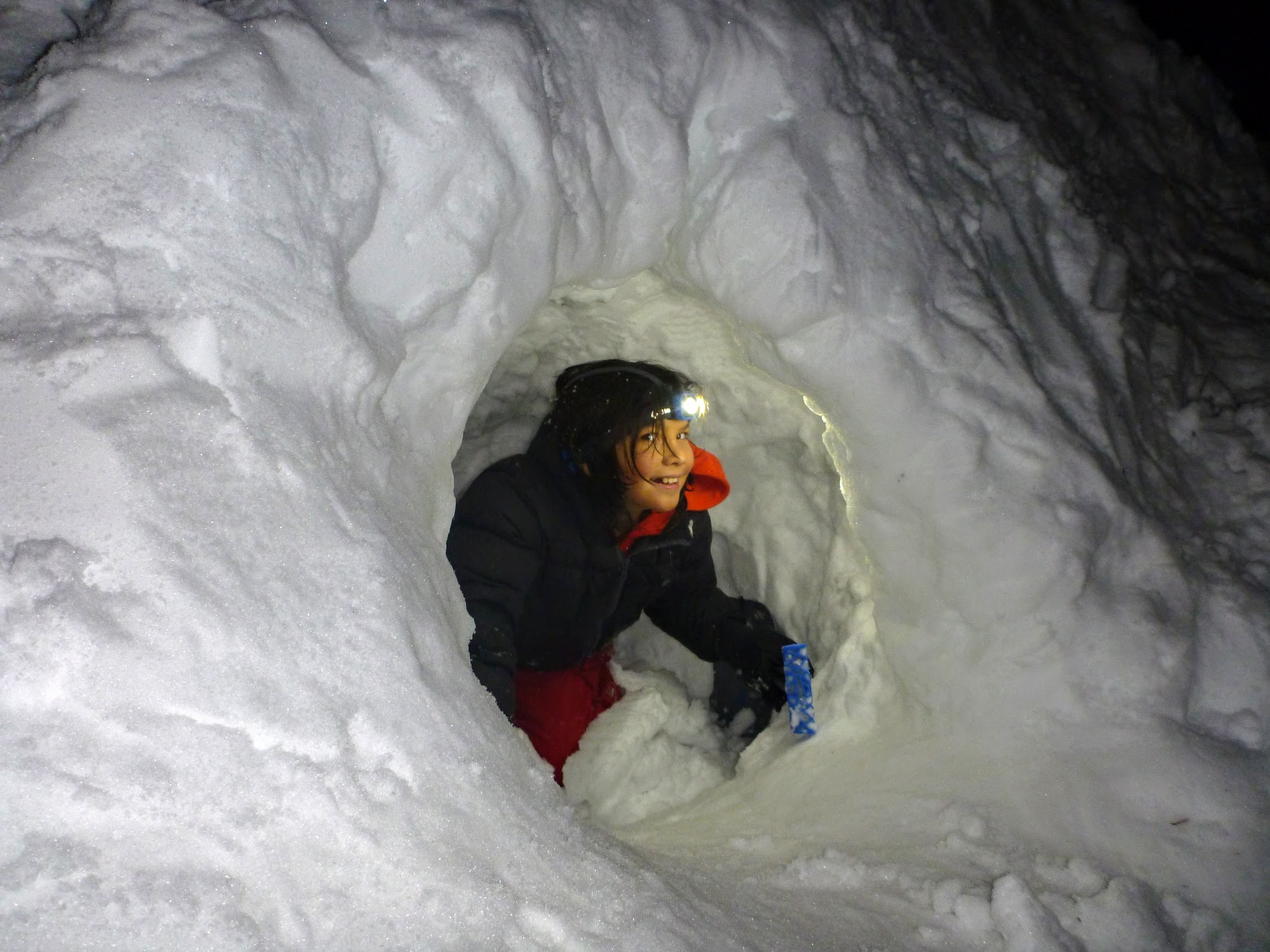 Devlin and Ben dug their own snow cave.

Because it was pretty warm, I decided that the snow cave should have a largish vent to stop it from getting too drippy inside. Fortunately some people doing transceiver practice on top of the snow cave put exactly one boot hole through the top, so I didn’t need to do any additional work. I was not around while the boot hole was made—otherwise, I might have said something like “Please practice more or less anywhere except on top of my snow cave.” Christian was at the hut and thought to himself “I wonder where Jeff’s snow cave is. I would have thought he’d have put it where those people are doing transceiver practice.”

The next morning we met Anne Vialettes at the hut. She’d forgotten her skins and had skied up to the hut with foliage Voile strapped to her skis, so she gets a gold star for that. Because we were on our way out, she stole the skins I’d borrowed for Ben from Christian, so that’s where those went. 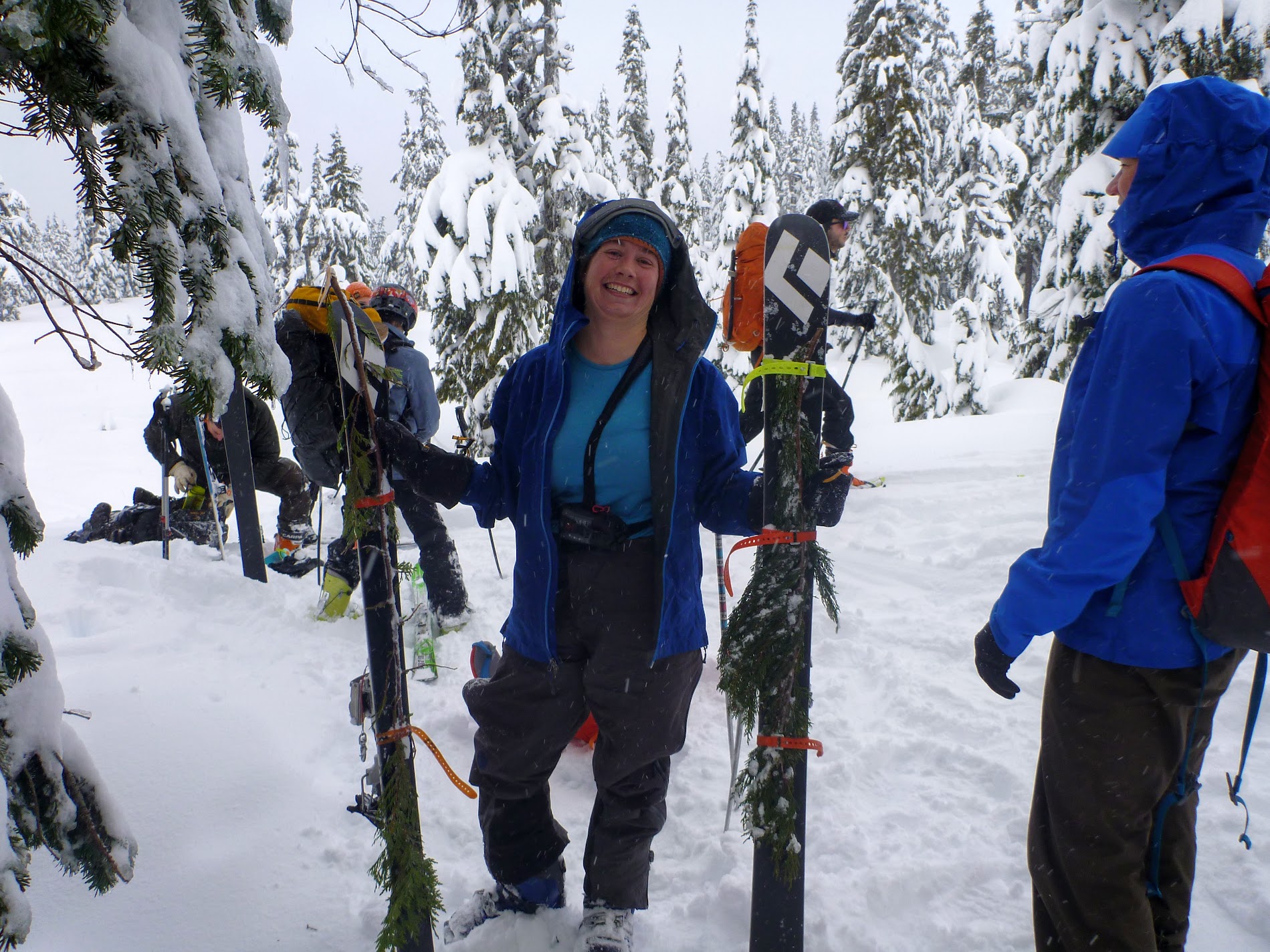 Back at home I put Devlin’s mitts, the silnylon sack that held them and the hoodie I was wearing during the rescue into the washing machine and they went round and round.

This entry was posted in Ski, Trip Reports and tagged outhouse, Red Heather. Bookmark the permalink.

6 Responses to Spearfishing in the Red Heather Lagoon, Jan 4-6 2019