I’d been looking for something beginner friendly for my son Devlin’s friend and associated parents that wasn’t Red Heather, since they’d done that already, and noticed Ross Campbell’s beginner-friendly trip to Zoa. I hadn’t been to Zoa before, but it seemed like the thing to do.

I pitched it, but they were busy. I kind of felt like going to Zoa anyways, but since there was no longer any requirement to be beginner friendly, it seemed like skiing off the south face of Zoa would spice things up a bit. I pitched this to Scott Webster, who told me that my route selection was dumb because the average slope was 40° and that we were going to get cliffed out and stuck in the dark for sure, but he decided to come anyways, I think because it’s been too long since he’s done a silly trip.

Saturday morning we got up and went to the 7/11 to stock up on garbage. I was going to get some king-size Reese’s Peanut Butter Cups but noticed that they’d brought back the NHL Half Pound Cup! Last time I had an NHL Half Pound Cup!, I decided that I probably shouldn’t have another one of them, but it’d been a couple of years since I’d seen one, so I somehow concluded that I shouldn’t pass on the chance to get another one, since it might be a few years since I get another crack at it. Scott was disturbed the the NHL Half Pound Cup! It was only 190 calories per serving, but upon closer inspection a serving was only 1/6th of the cup. I guess they expect you to cut it up like a pizza and share it among friends. 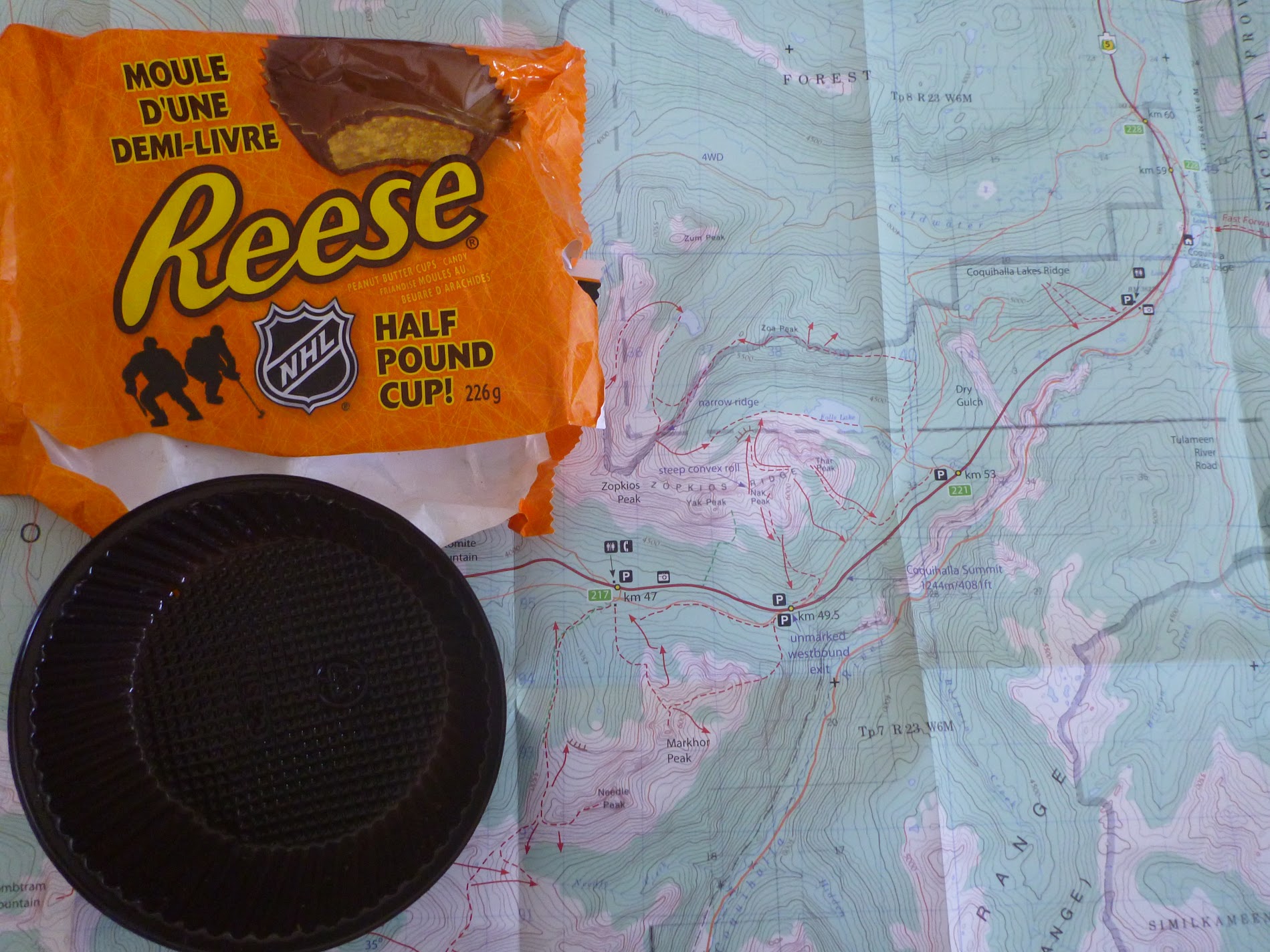 Close contour lines south of Zoa with NHL Half Pound Cup! for scale. Looking at the picture of the cup with the bite out of it and the plastic cup that held the it, it’s pretty clear that whoever took that bite could swallow a toaster.

One real advantage of the NHL Half Pound Cup! is that unlike other sizes of Peanut Butter Cups, it’s cast into a plastic cup instead of paper cups. There’s nothing inherently wrong with a paper cup, but there is definitely something wrong with more than one paper cup. Whenever I get Peanut Butter Cups, I’m driving somewhere and don’t have much time; otherwise I would have eaten something more responsible in a relaxed setting. As I’m leaving the gas station, I have my eyes on the road, my left hand on the wheel and my right trying to deal with shifting and opening up the Peanut Butter Cups. I feel around for the package, rip it open with my teeth, put it down, get a cup out, and, while holding the edge of the paper cup with my thumb and middle finger, push the bottom of the paper cup to eject the edible portion into my mouth and bite down. Normally this works just fine, but periodically there’s more than one paper cup nested together, and all of a sudden I’ve started chewing one or more extra paper cups into the good stuff. At this point there’s no going back, since spitting it out and trying to sort it out is more objectionable than eating paper cups. I then feel stupid, because I’ve just done something stupid, and remind myself to check for extra paper cups before biting down, knowing that I’m probably not going to next time.

One time I remembered to check for extra paper cups, detected that there was more than one paper cup, peeled off a second paper cup and only ate two of the four paper cups on that Peanut Butter Cup.

We started running into VOCers at the Chilliwack Tim Hortons, at the trailhead, on the trail and near the summit. It was good to catch up with people. 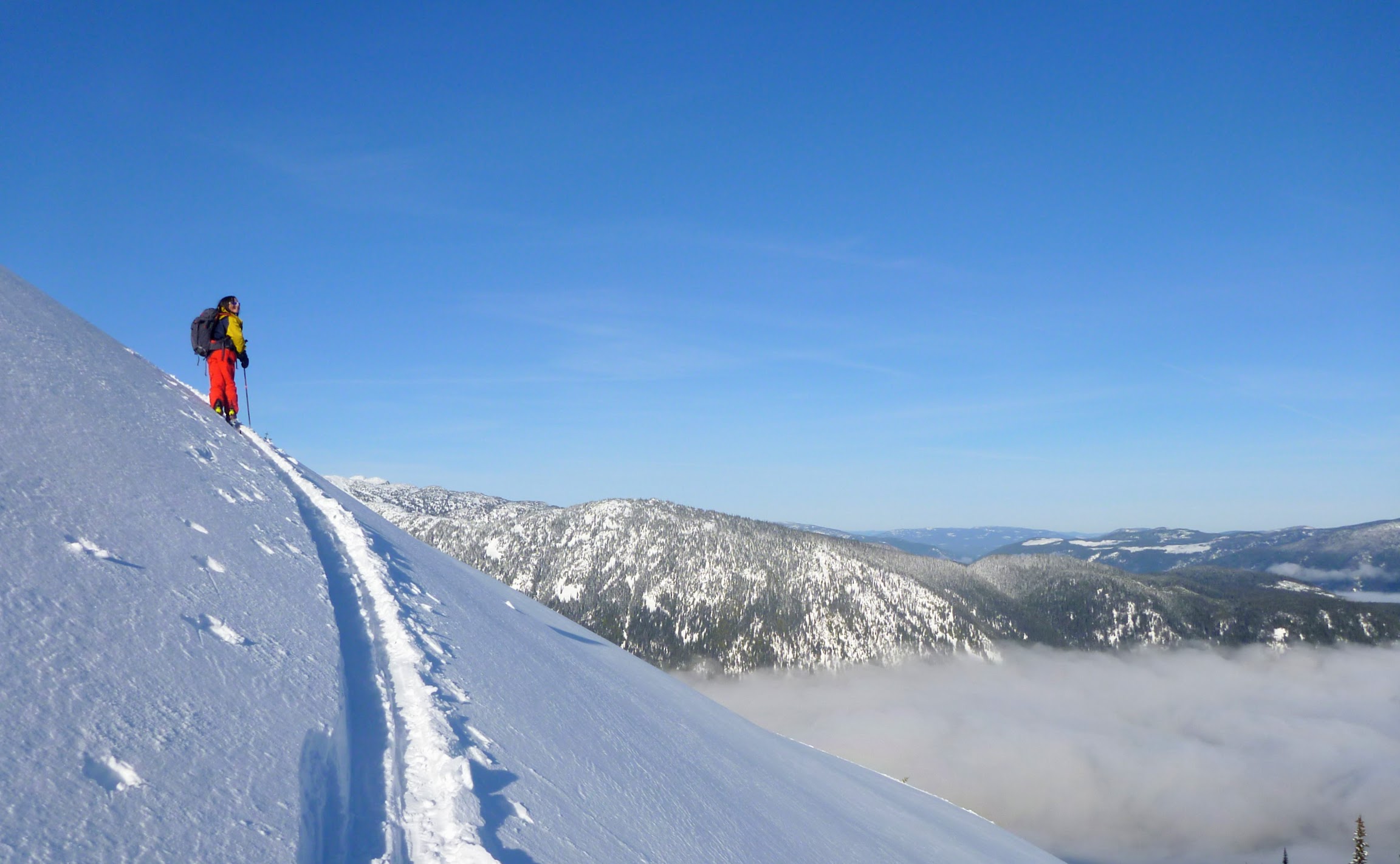 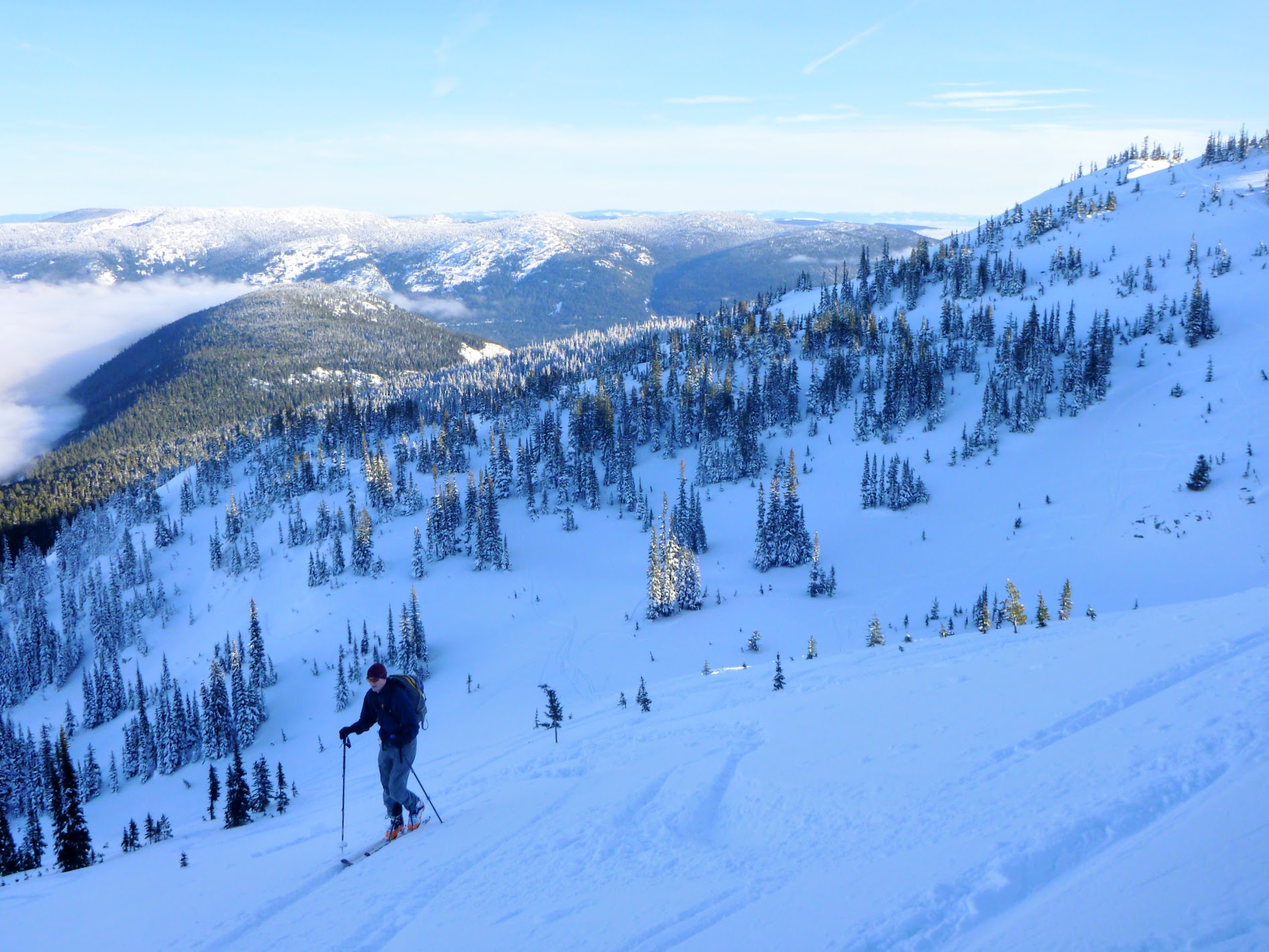 Scott near the summit. 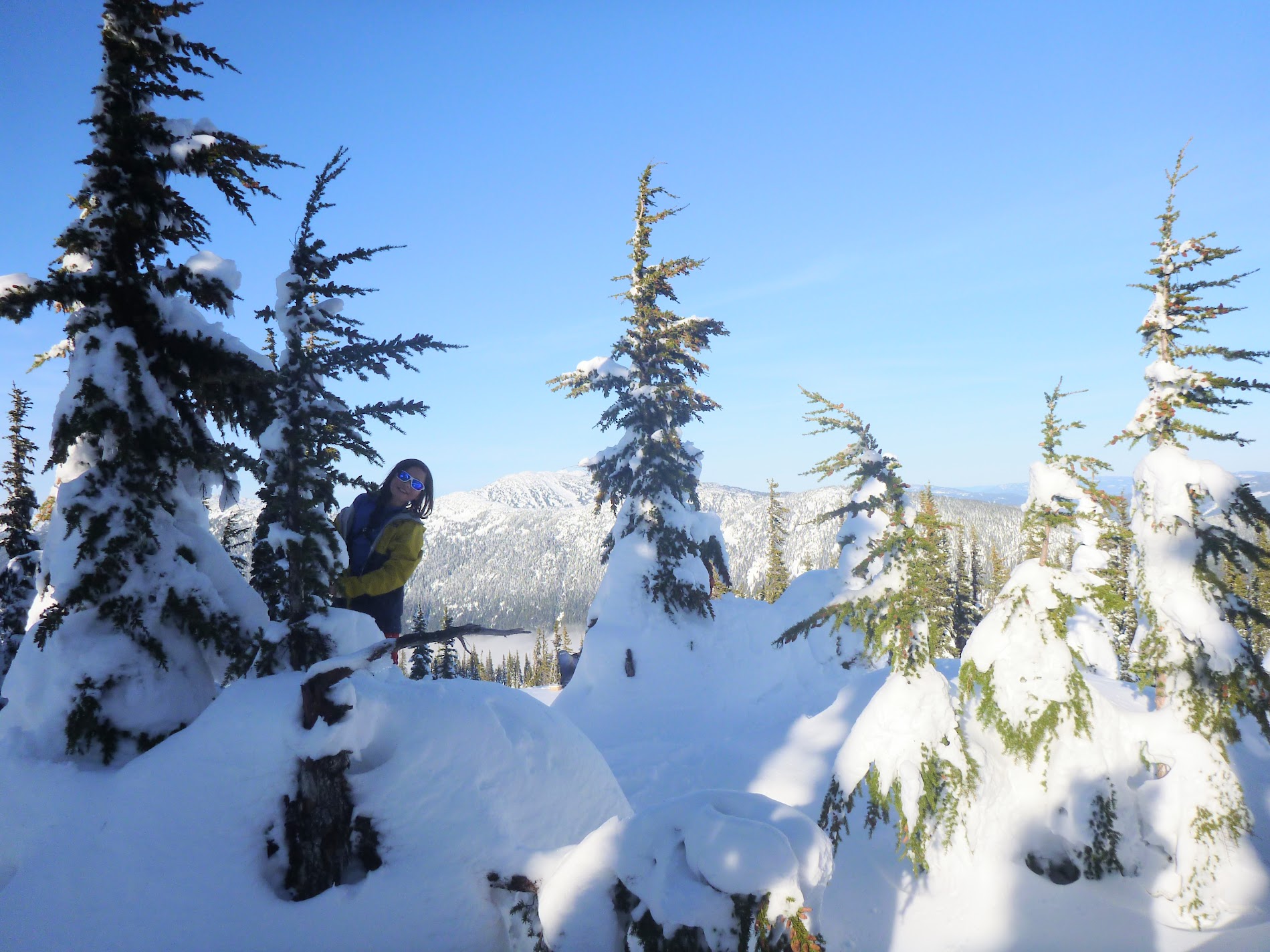 We started discussing the best line down from the summit of Zoa. Scott hadn’t skied ridiculous things for a few years, so we decided to go a bit further west and avoid the steepest section. It wasn’t long before we couldn’t see anything but nearby trees. Where there were breaks in the trees, it was fairly sun baked, so I was knocking down all kinds of nonsense. Most open areas that were big enough to potentially bury someone had already had been rolled over by soggy point releases, so between that and regular intervals of dense forest, it wasn’t hard to find a safe way down, at least from the perspective of avalanches. 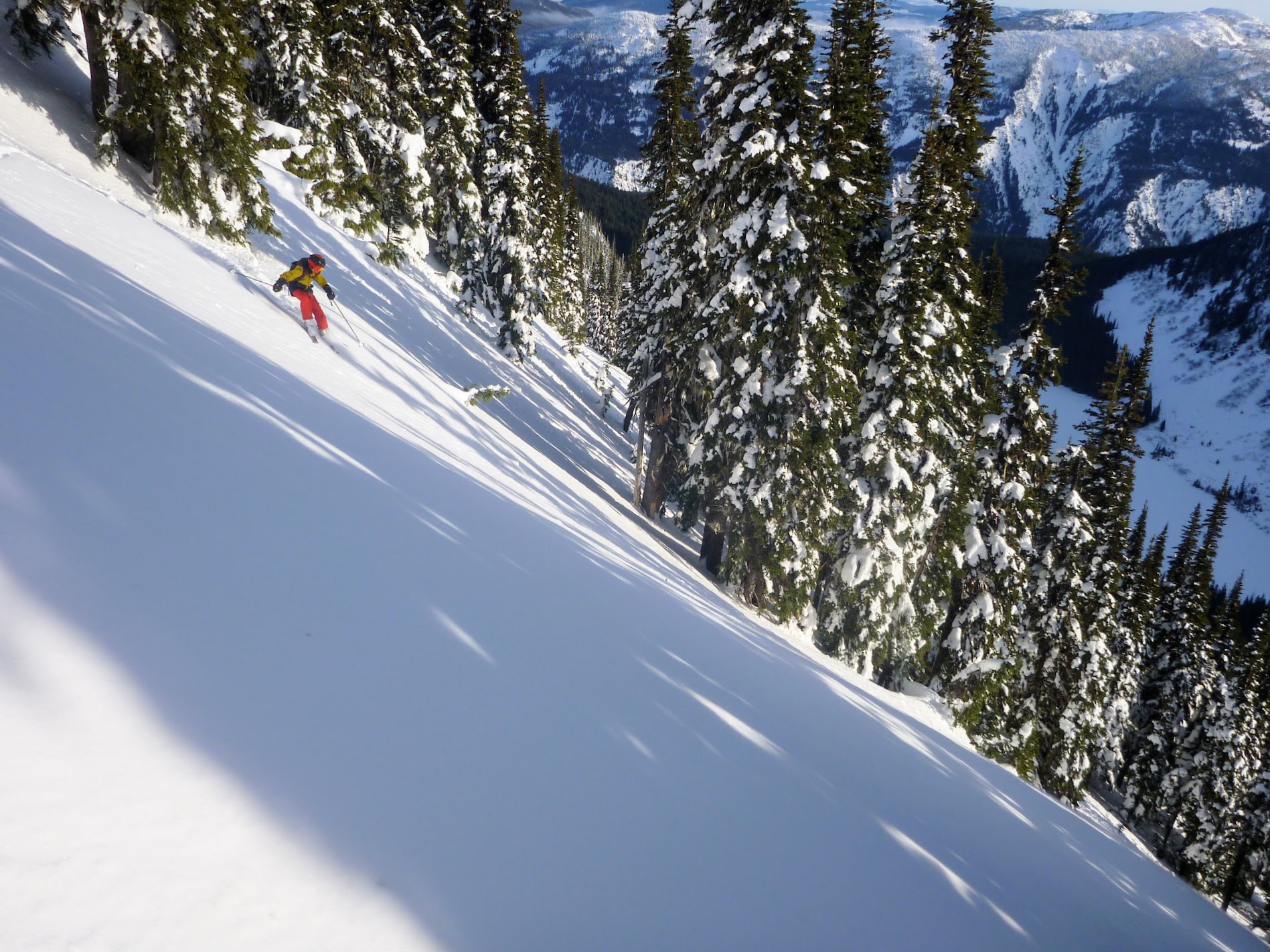 This makes it look better than it really was. 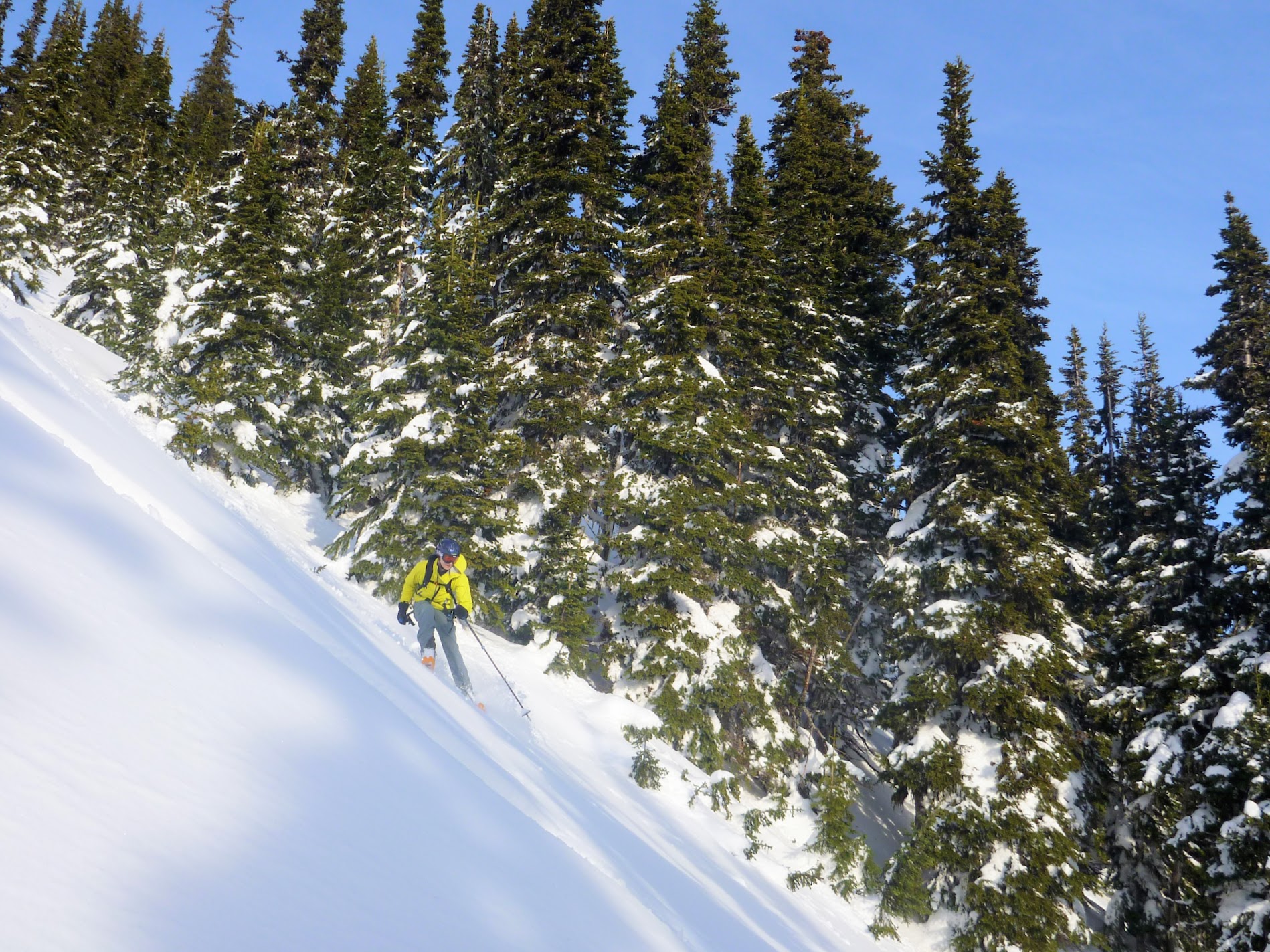 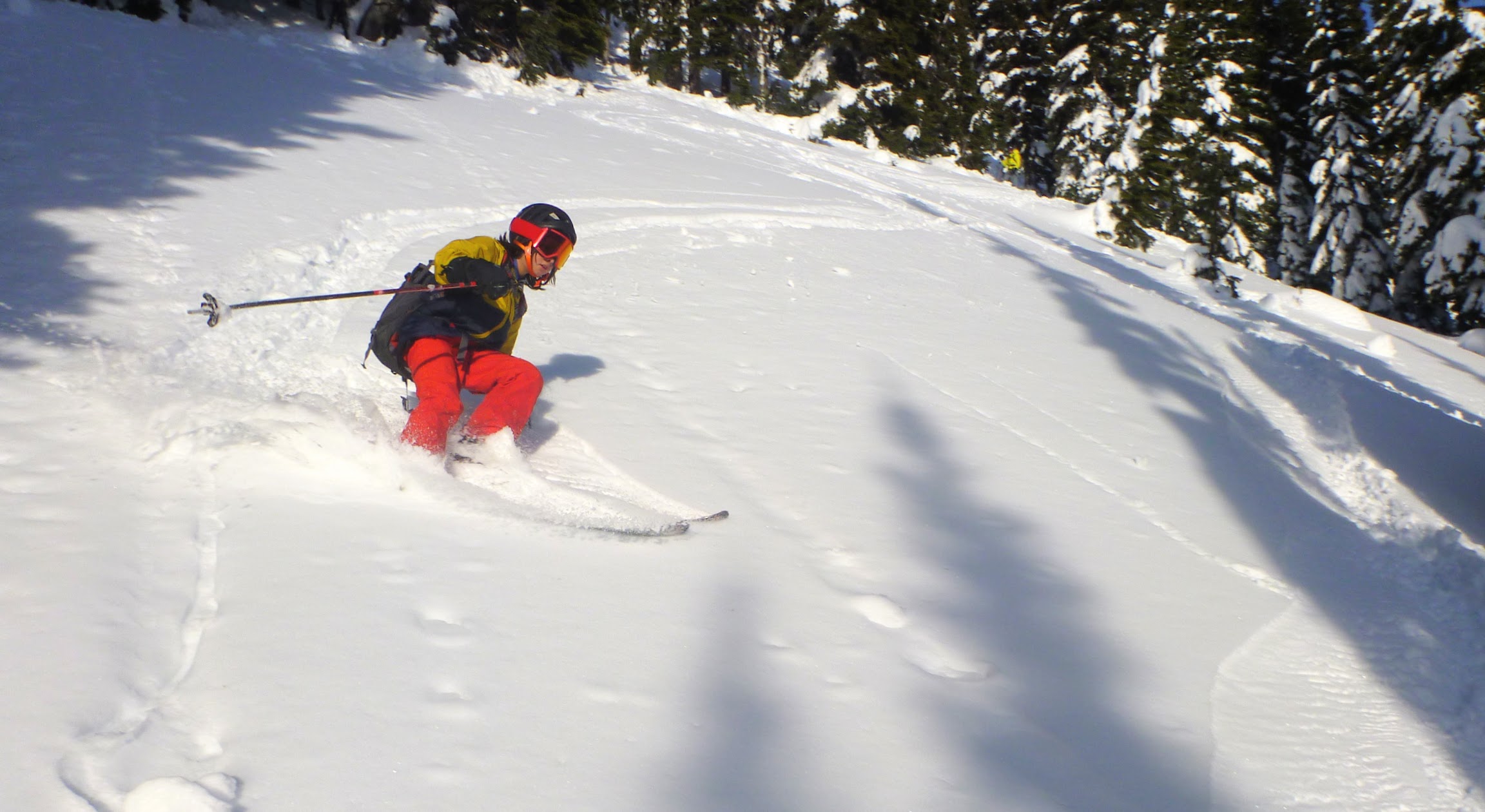 “This is kind of like what I thought it would be,” bemoaned Scott.

Not out of spite, but just because all the open areas seemed to be on skier’s left, we ended up angling to the direct fall line from the summit and did ski where the contour lines were all crunched together. As we went further down, we got to the area that had been in the shadow of the next ridge and were soon rattling down refrozen loose wet avalanche debris. 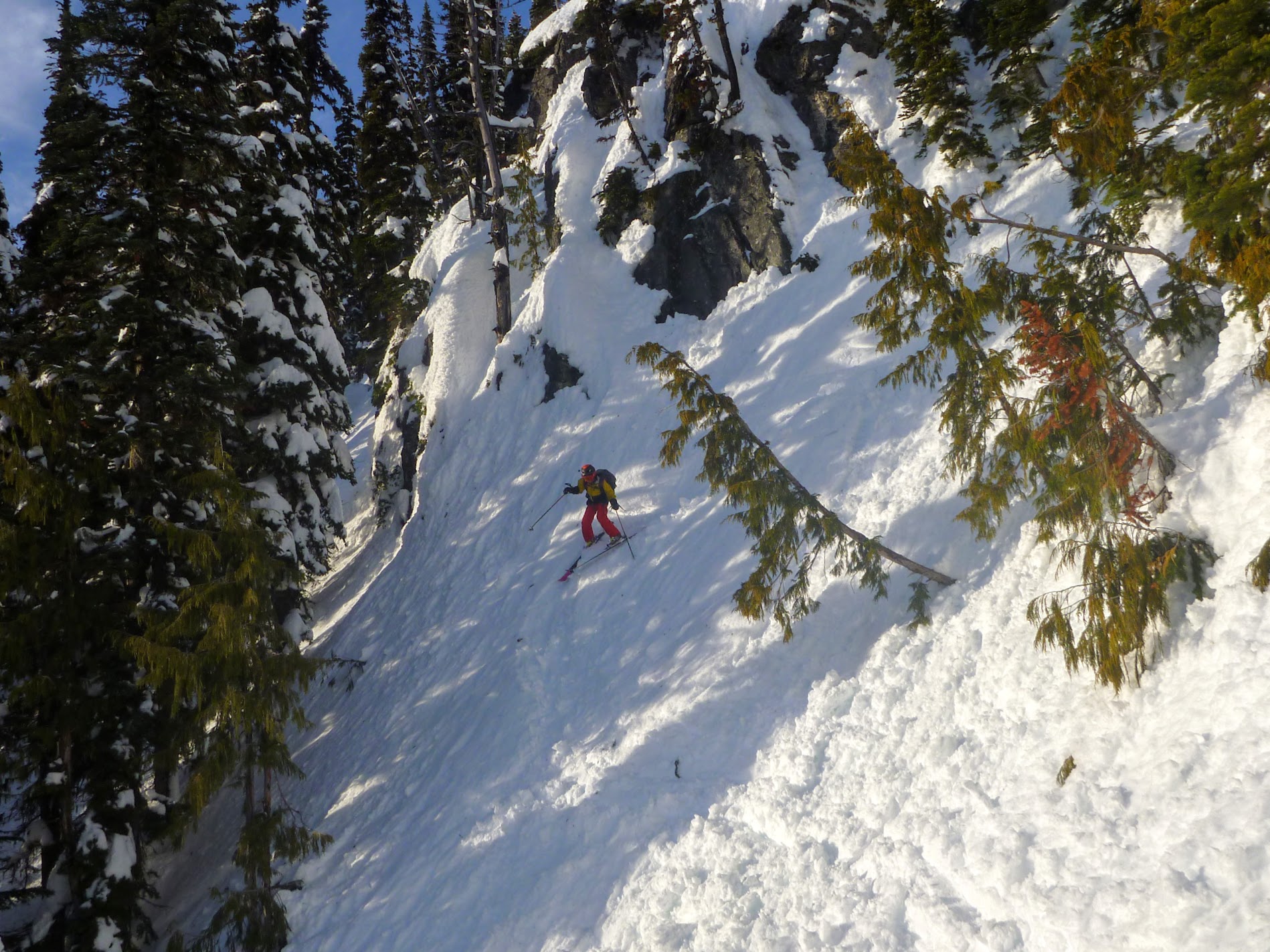 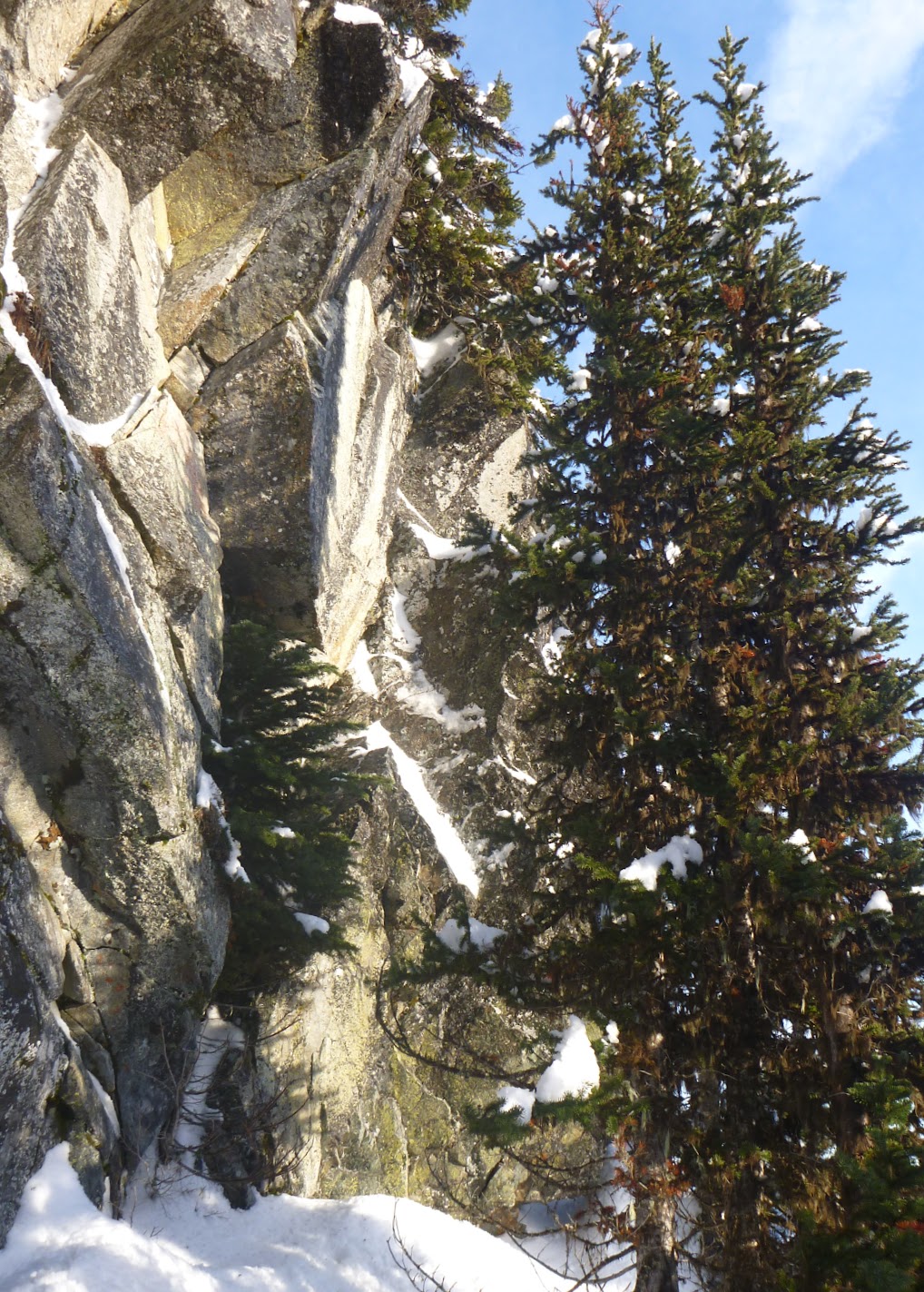 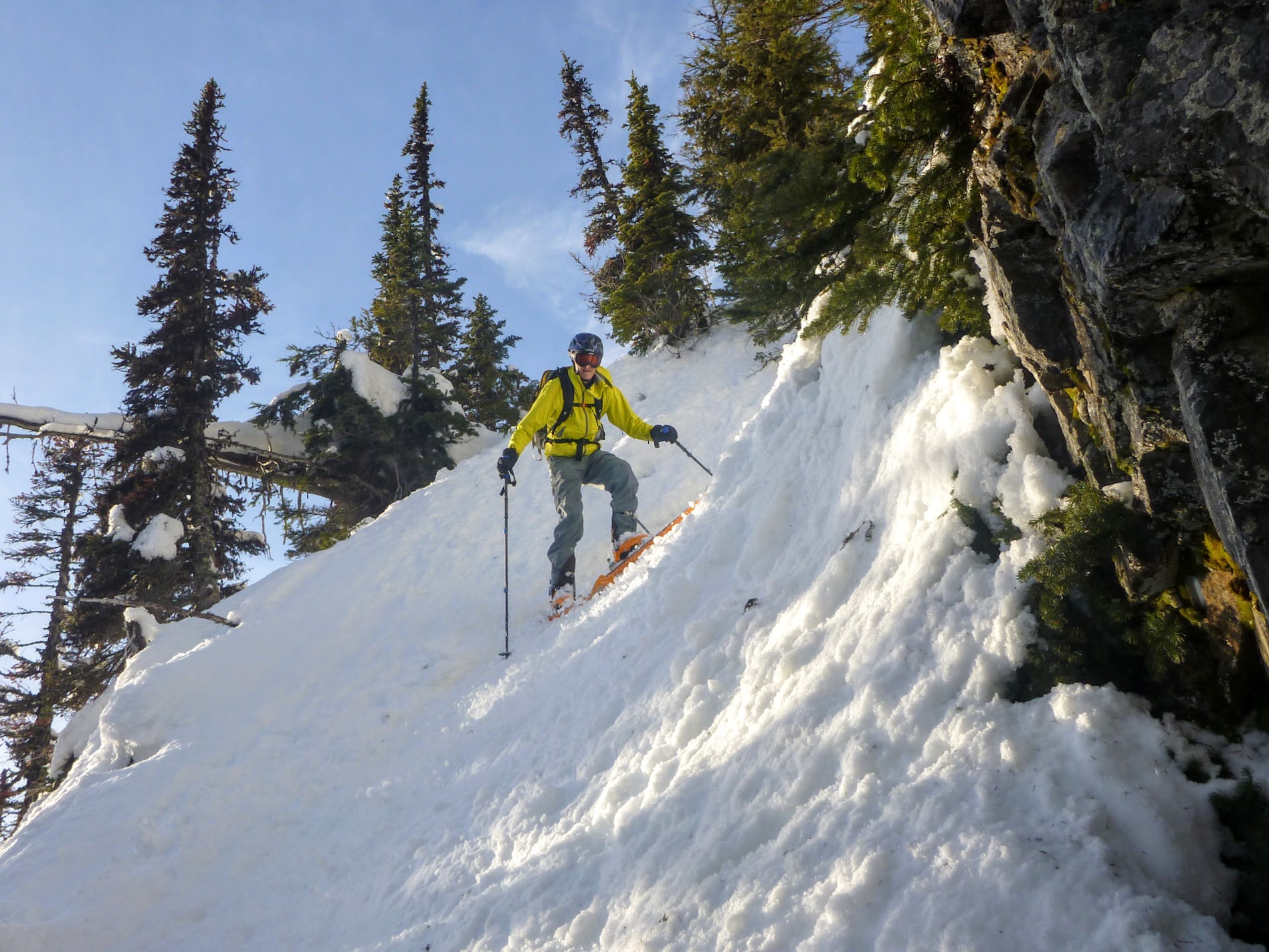 Scott negotiates his way around the cliff. 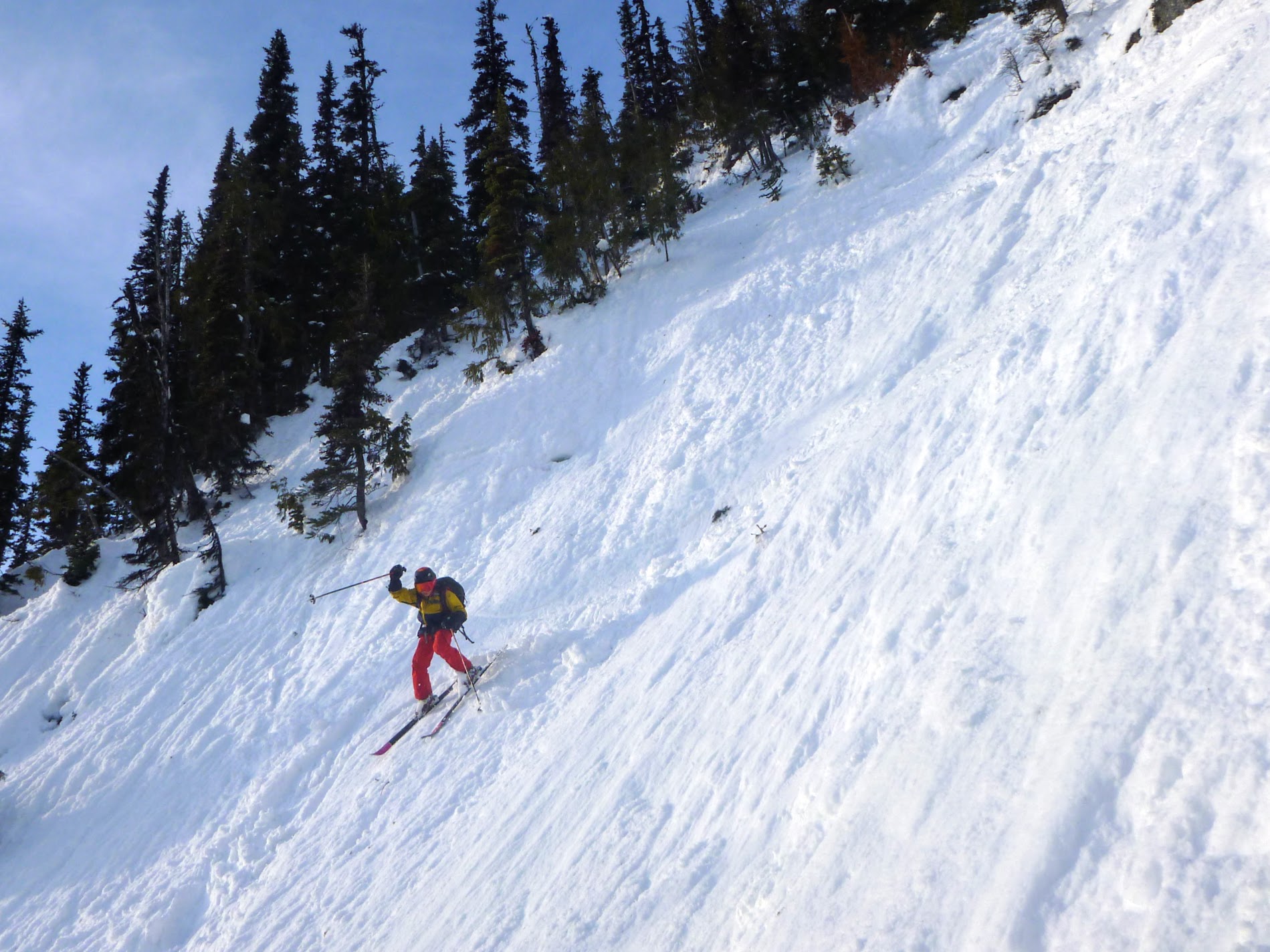 Rattling down the refrozen crud.

Scott found some devil’s club at the bottom and concluded that it was now a real VOC trip. We put on the skins and crossed Falls Lake without misadventure. Back at the cars, most of Ross’s beginner-friendly trip had made it back to the car.

As we came back through Chilliwack, Devlin remembered why he saw an ugly frog in the Chilliwack logo and explained it. It still seems like a bit of stretch, but it goes like this: 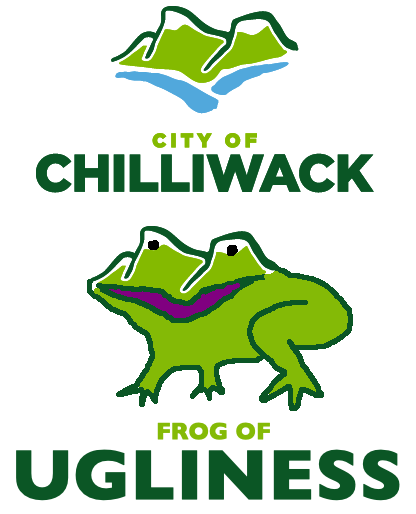 All in all, I’d call the trip a glorious success. Scott got out into the backcountry after a long hiatus. One could argue that the skiing we did wasn’t good skiing, but I wouldn’t listen to them. It’s good skiing if you challenge yourself and get some exercise.