This is the story of how Caitlin Schneider, Julien Renard, Birgit Rogalla (kind of), and Vincent Hanlon traversed the big no fall zone they call the McBride Range. “Hey,” says the random reader browsing the VOC website, “isn’t that kinda where there’s a mountain named after the VOC?” You’re correct, random reader, there is a Veeocee Mountain, and it’s right in the very middle of the traverse: but if you want to find out whether we made it to the top, you’ll have to read on…

There is going to be a much longer and more detailed version in the VOC Journal, but we do not want to give away all the good parts!

April was the cruellest month, breeding bacteria in Birgit’s throat, mixing mountaineering and disease, stranding her on the snowless couch. The evening before we left, the sore throat that had troubled Birgit in the afternoon worsened, later that night a cough joined it, and by morning a fever had appeared. A 5:30 AM phone call begged for a delayed pickup time, and after half an hour repacking eight days’ worth of food and gear, Birgit stayed home.

Up the long slog that is the SInging Pass trail, we went. We came over the hill above Russet Lake to be faced with the almost constructed ACC hut. It is a small palace on the hill. After contemplating the changes coming to the backcountry, we slogged another few minutes past the lake and decided we did not have the energy to make it up the next hill. We watched a group of five head up ahead of us and it looked too steep at the moment.

We dumped our packs, pulled out our shovels, and began construction on the first of many amazing, wonderful, beautiful walls around the tent. These were the best walls. These were the most big walls.

The next morning, we set off again around Overlord to the Diavolo Glacier.

Our next routefinding question was how to descend into the valley. Our chosen route landed us right at the start of Detour Ridge… wait, does that mean we have to go around it? Turns out that for our traverse, we needed to side-hill over a cliff a short way to get around the first gendarme, and then side-step up to the top of the ridge, which then mellowed out down towards the Cheakamus River. 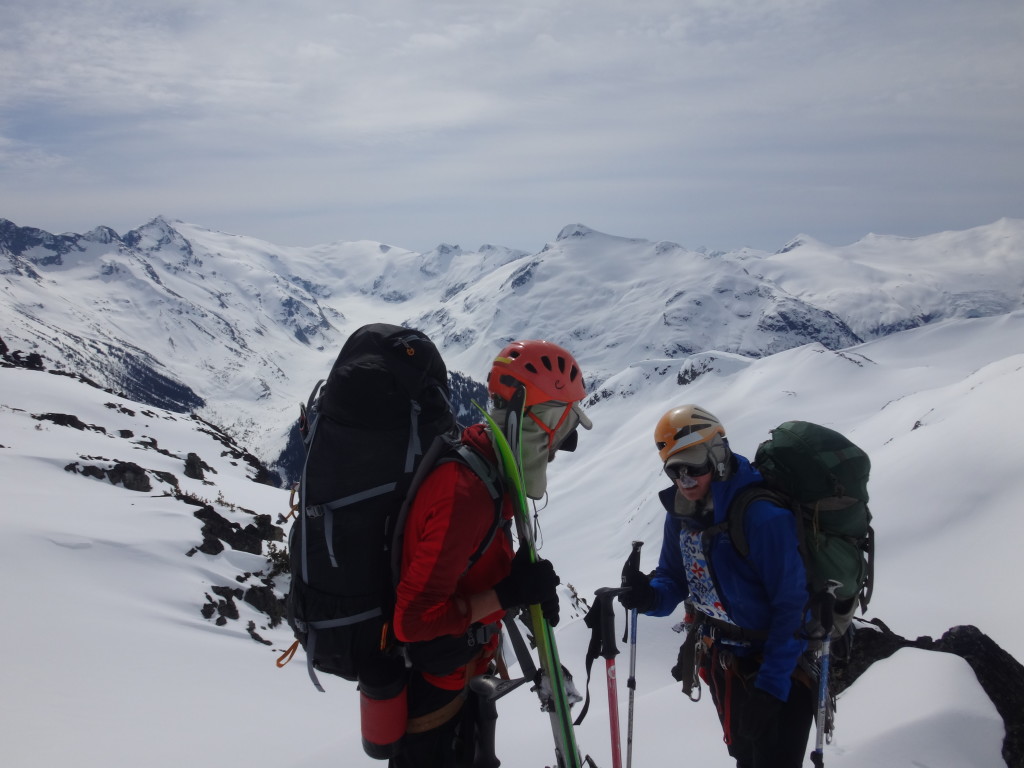 While coming around a corner and hoping to keep a bit of elevation, Caitlin skied straight off of a 3 meter wind lip and went flying.  If the snow had been soft at all, this might not have been an issue, but she hit the ice instead, losing both skis and twisting her knee. Well Shit. We decided to keep going to the River and see how things went.  Not 30 minutes later, we saw three skiers coming towards us. After chatting briefly, they told us one of their group had tweaked their knee and they were heading back to Whistler! But to make a long story short, Caitlin’s knee turned out to be mostly ok, at least after a couple days of recovery.

We fumbled the final descent to the Cheakamus River over a low forested shoulder and down through thick forest to the valley floor, falling all over the place on awful snow.Following the upper Cheakamus River to its isolated headwaters at the McBride Glacier was much more pleasant.

Julien had planned to camp on the top of the McBride Glacier, some 700 meters above the river. The glacier was really mellow, so after a snack break we headed up. Wall #2 construction began! And we enjoyed the sunset while eating dinner on the rocks above a glacier, looking at the summit of Mt. Sir Richard.

The next day included two summits! We packed up and headed to Nivalis. This summit was a bit out of the way, but totally worth the side trip. Ski crampons and a clever skin track brought us up icy slopes to the base of the summit block. Leaving our skis behind, we kicked steps up a short snow slope and then walked the rest of the way to the summit.

Descending and loading up our packs again, we crossed the top of the McBride Glacier under the summit of Mt. Sir Richard. Once reaching the col on the other side, we dumped our entire pack and skis and hiked up to the top of the peak. The summit at 2665 m is the highest of the McBride, but it’s only 350 m or so (150 m of elevation) off the traverse route. When we arrived, the clouds had rolled in and the wind was getting fierce. It made the summit a vaguely unpleasant place, so we took a look around and got the hell out of there.

Past the summit, we pulled off the skins and side-slipped through a white out all the way to the Gatekeeper. The slope was pretty icy, and dropped off sharply to the Ubyssey Glacier.

The original plan was to camp in front of the Gatekeeper and try to climb Veeocee Mountain, but looking at the terrain and the current weather, the route did not look feasible and the location was suboptimal for camping due to the high winds.  So, we gave up on the idea of Veeocee and headed down the avalanche-prone south-facing slopes below the Gatekeeper to Wolverine Pass.

We found a nice flat spot just above the low point in the pass and dug the daily tent fortress and outhouse. From here we turned our gaze once again to Veeocee. Interesting… from this side, the route to the ridge might be doable! It would be a long, maybe steep bootpack, but then the ridge looked skiable to the summit! 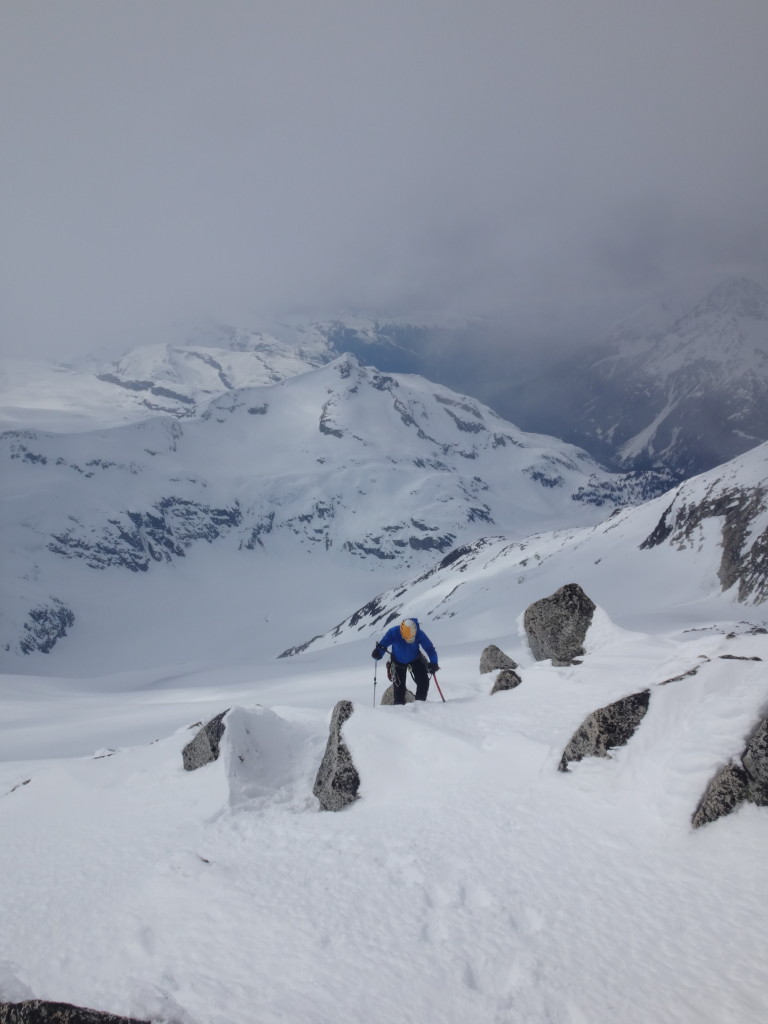 Walking onto the summit of Mt Sir Richard. Veeocee Mountain is the ridge directly behind Caitlin. Photo V Hanlon

Overnight, the snows and wind came, burying part of our camp and tent in spindrift. The clouds didn’t disappear by morning, and we spent a couple hours in the tent. At least it was warm in the tent. And there was food. Actually, by the time the clouds cleared at 10 AM it took some serious strength of will to get started.

The route we’d seen was the short ridge NE or ENE of Wolverine Pass, leading up 1 km (350 m elevation) to the flat bump at the end of Veeocee’s Mountain’s 2-km-long SE ridge. We don’t think this is the usual way to gain the SE ridge. Most people do it from the Ubyssey Glacier. But if you’re on the McBride, climbing Veeocee from Wolverine Pass may be preferable to dropping 500 m of cliffy glacier (from the traverse route) before climbing back up to look for a weak point on the wrong side of a heavily corniced ridge.

Anyway, we skied up out of Wolverine Pass and then bootpacked up steep snow (up to 45° or 50°) with exposure to cliffy rock bands (not very confidence-inspiring) for EVER. It took a while. With wisps of cloud swirling around and below us, we skied down and up along the ridge and—finally—to the summit. Now, Veeocee Mountain isn’t exactly the tallest peak in the area. Bivouac optimistically gives it 2380 m (well below Sir Richard next door), though since the website was founded by an ex-VOCer that may just be friendly nostalgia. But it’s the perfect spot for perfect views of the McBride Range and the spectacular glaciated peaks that surround it: to the north the Spearhead Traverse and beyond; to the south Mt. Pitt at the heart of Garibaldi Park. 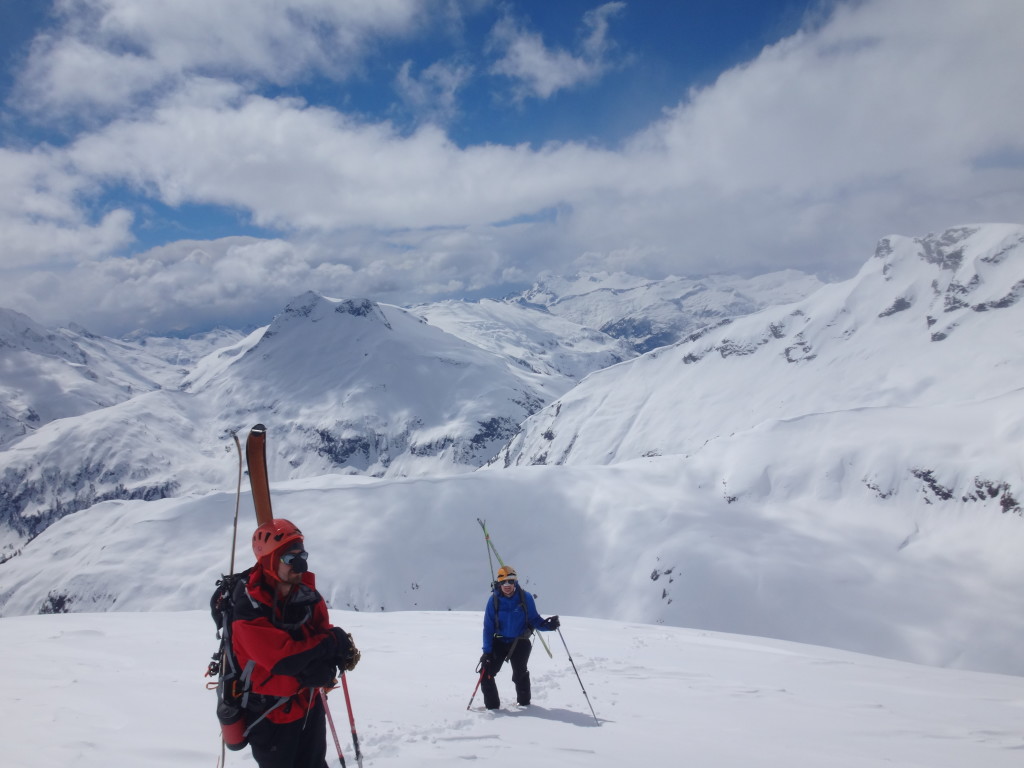 After the bootpack. Photo: V Hanlon. 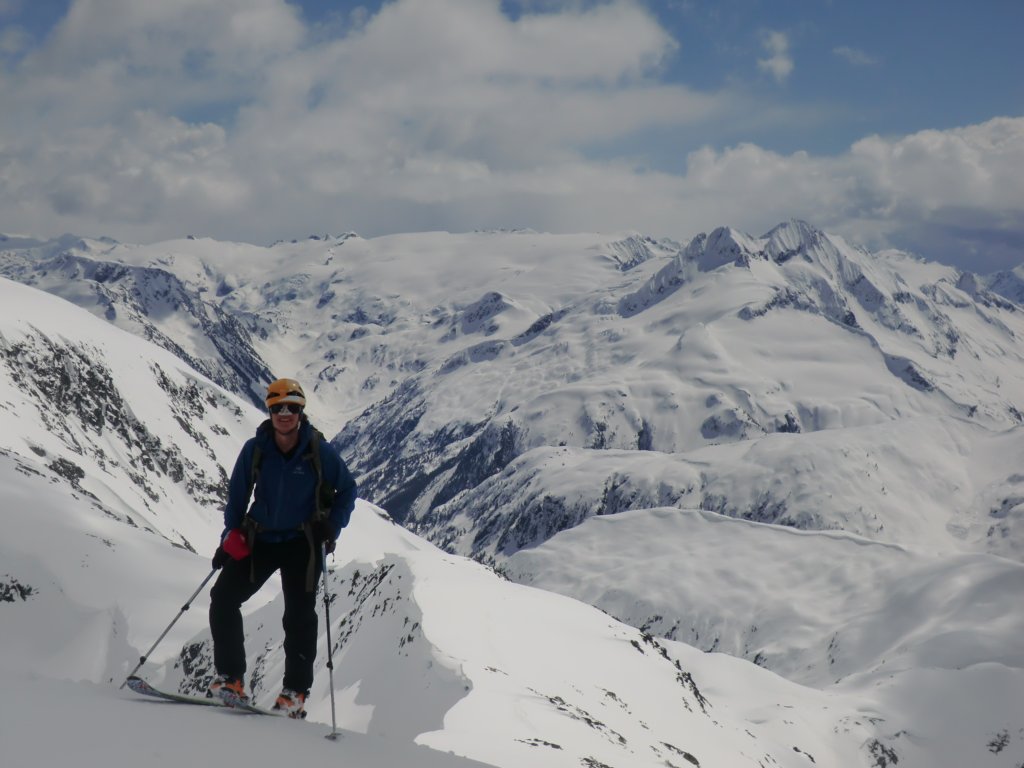 Rather than skiing the steep bit into the Pass, we contoured NE out of camp, dropped W into the valley underneath the cliffs at the head of the pass, and followed a mellow bench below the standard route out towards the Snowbowl Glacier. Past Forger Peak, which guards one ridge of the glacier, we dropped down the mellow slope on the other side. After a few relaxed turns, we were faced with a long side-hilling traverse, above a cliff. From where we stood, it loooooked like it was downward sloping and we could zip around under the scary cornice to the other side.  We also already had our skins off.

Well, looks can be deceiving. It was not downhill… which left us waddling as fast as we could in the growing afternoon heat under a very large cornice. We put our skins back on as soon as possible and proceeded to Drop Pass.

It was not late, but we took the sunny opportunity to nap, dry out our feet and socks and boots and sleeping bags. There were nice rock outcroppings to make dinner on, so all in all a lovely place to hang out for the afternoon and evening.

The next morning dawned clear and bright. We were up and had our ski crampons ready to ascend the steep slopes above Drop Pass. From the top of those slopes, we needed to contour around Sinister Peak. And once again, this involved side-hilling on steep icy slopes above uncomfortable drops, under cornices.

Last time we had kept our skins off, so this time, we thought maybe… since it was so icy… we would keep skins and crampons on. Wrong choice again. Julien and Caitlin side-stepped down the debris strewn ice, but called back to Vincent that he should strip of the skins and crampons and just ski.

Whew, past Sinister Peak. It turns out that going over this is also an option if the snow conditions are really bad. Now we had to find ‘The Notch’, which is mentioned in a few trip reports. This sounded ominous, but was pretty neat. It is a shortcut through the rocks which allows passage to the slopes leading over to Hour Peak.

This day was also supposed to include some peak bagging. And indeed it did! We found a good flat spot just on the other side of Hour Peak, and dropped our heavy stuff from the packs. Isosceles Peak, here we come!

About 45 minutes of lovely skinning, and some wind lip navigation, later, we arrived at the summit of Isosceles Peak.We could see much of the area we had just traveled, and tried to find Mt. Veeocee among the other bumps in the area. Mt. Sir Richard and Nivalis were pretty obvious.

At Camp, as usual, Julien convinced us to dig a massive snow wall around our tent, and as usual we made snide Trump jokes and asked how Mexico would pay for it.

We slid out of camp towards the gap in Crosscut Ridge (which looks wildly cool), and made a long and blessedly cornice-free traverse down into Gray Pass and back up towards the Bookworms. With time to spare and—after a generous snack break—we looked around us for a convenient peak: Mt. Carr!

Descending from the summit, flat light tarnished our trip down the Sphinx Glacier. We searched for a route that was visibly crevasse-free, attempting a detour around the Bookworms before a wind slab and a wind lip turned us around. When the world suddenly became 3D again, we realized what amazing snow we had and made fancy turns all the way down to the flats and then to the hut, where we read old VOC Journals all evening.

Garibaldi Lake froze as solid as an ice rink the next morning, and so we skated quickly across before it slushified. The switchbacks were in horrendous condition. We soon gave up on skiing and walked out, admiring the shades of green that we hadn’t seen since the Cheakamus River. Down at the parking lot, we jumped into the creek and washed, lay in the sun, munched contentedly, and waited for Birgit to appear with her car and a bottle of apple juice.