The long way to the top: Mount Baldy circumbike-n-hike

I can’t quite decide the best title for this trip report, so I’ve listed a couple of options above. This trip actually originally was intended as a 6-day ski traverse of the Pemberton Icefield, which we sadly had to abandon after considerable planning efforts when the weather forecast turned.

So where to go when the weather on the Coast is poor? The Okanagan! We settled on cycling the Kettle Valley Railroad (KVR) trail, a well-known cycle touring route that follows a decommissioned railroad track in south-central BC. This railroad track was built in the early 1900s and for many decades served as the key connection for passengers and cargo (mainly mining ore and Okanagan fruit ) from the southern Interior to the Coast and destinations beyond. It bisects three major mountain ranges and was therefore a key connection in this region although it was eventually decommissioned in the late 1980s as highways superseded Canadian rail.

Lucy adeptly researched on short notice an ~350 km loop that mostly avoided on-road travel by taking the KVR north out of Penticton, and following its course all the way to Rock Creek before re-gaining the Okanagan valley via backroads near Oliver.  The route essentially was a circumnavigation of the Okaganan Highlands, in a clockwise direction. Mount Baldy is the highest point inside this circular route, which we will return to later. . .

With this loop in mind, we left the rainy coast on Wednesday (May 15) and B-lined along the scenic Crowsnest Highway to Penticton, where we would ditch the car.

Of course, upon arrival we unloaded our bicycles and began to discover all of the problems they had—in this case, mostly Emily’s bike which had an ill-fitting rack and a flat tire. These problems we remedied with a quick stop at the Penticton bike shop. An important fix given that we wouldn’t see another major town or over the next 6 days.

With this additional delay, we didn’t end up hitting the KVR until 4 PM.  The first day of riding involved cycling past the vineyards and orchards above Okanagan Lake before taking the long switchbacks into the forest northeast of Penticton. We got to Chute Lake, over 1,000m above Okanagan Lake, just before dark, which was important because it allowed us sufficient time to take a quick dip in the lake before setting up camp. 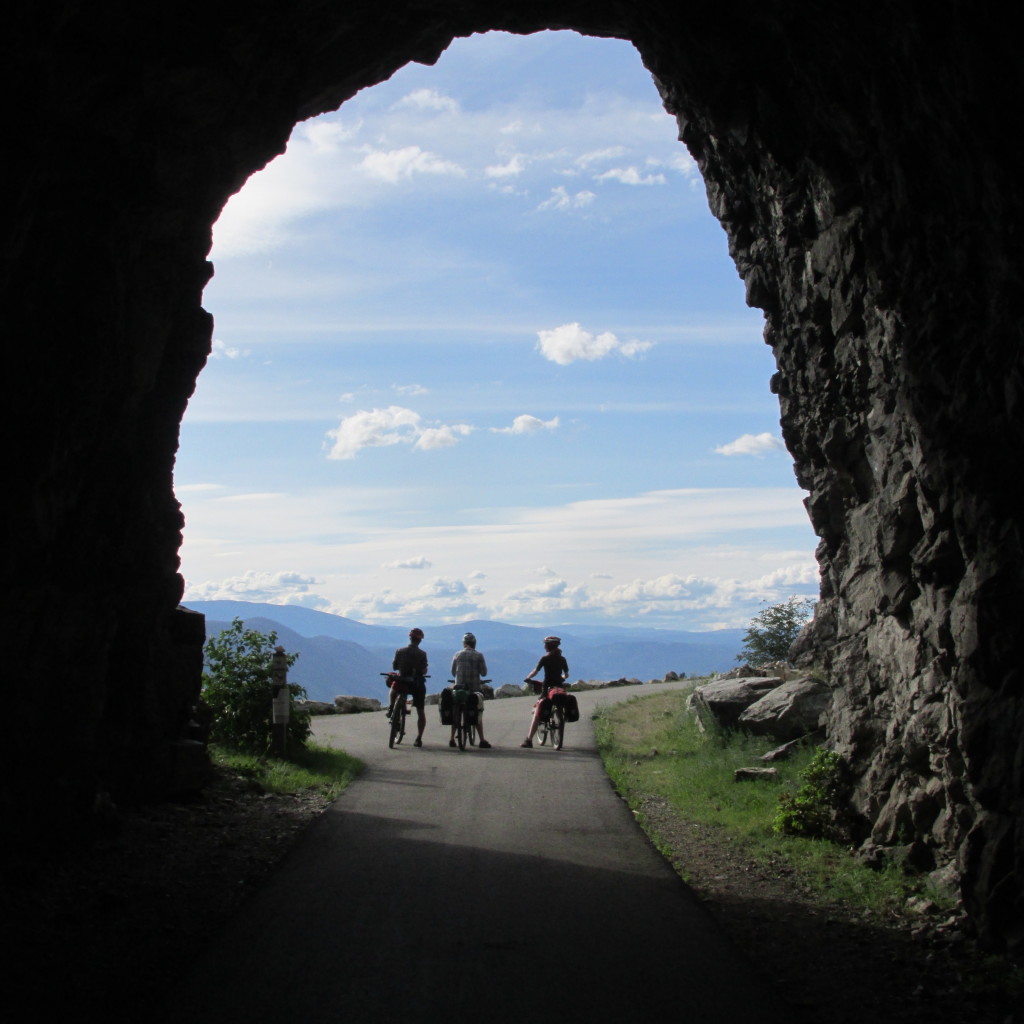 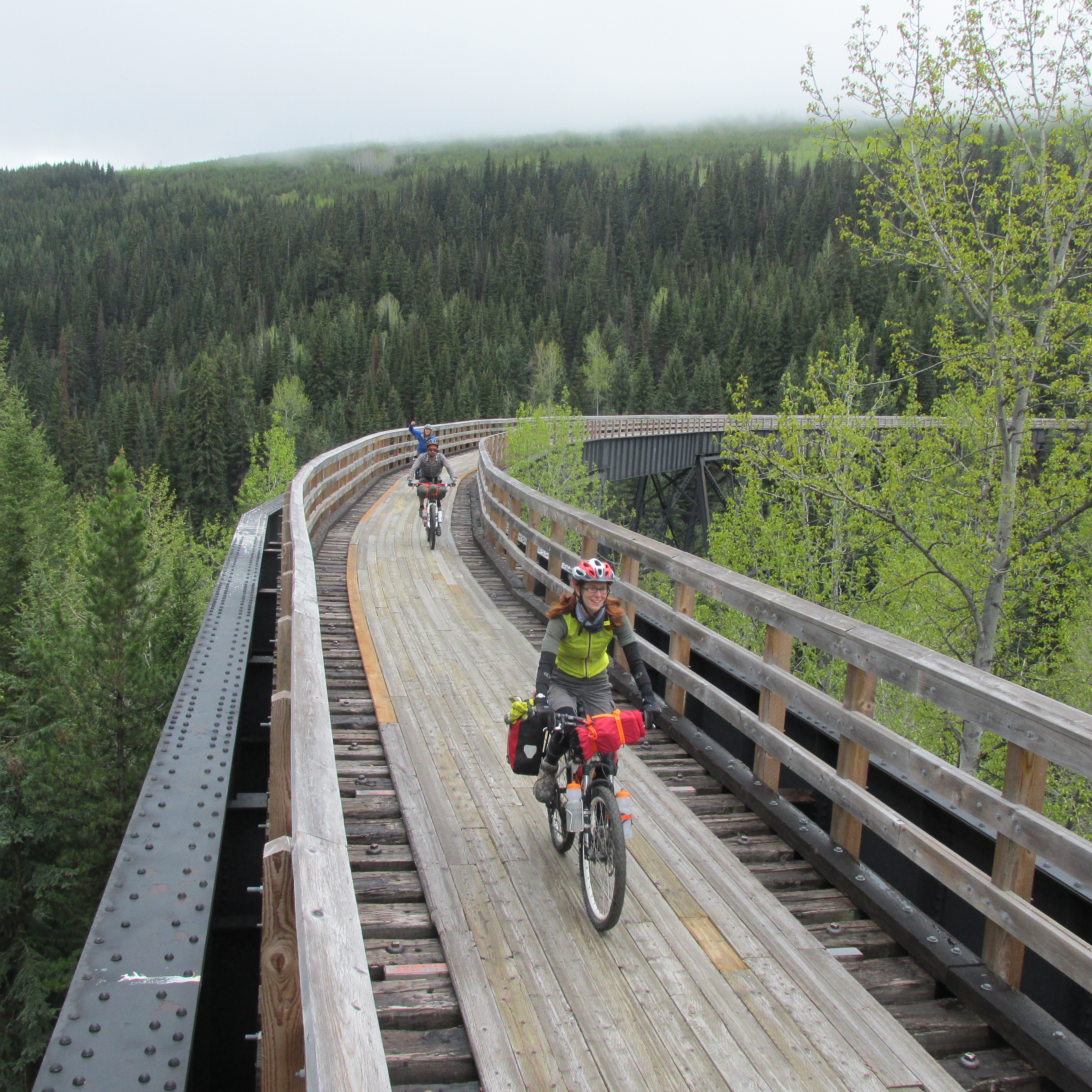 On Day 2 we cycled through some of the more scenic and touristy sections of the KVR, including the multiple railway trestles around Myra Canyon. Here we admired open views in a dry Interior Ponderosa pine forest that had recently been ravaged by wildfires. Emily especially was excited about the trestles and railway tunnels. 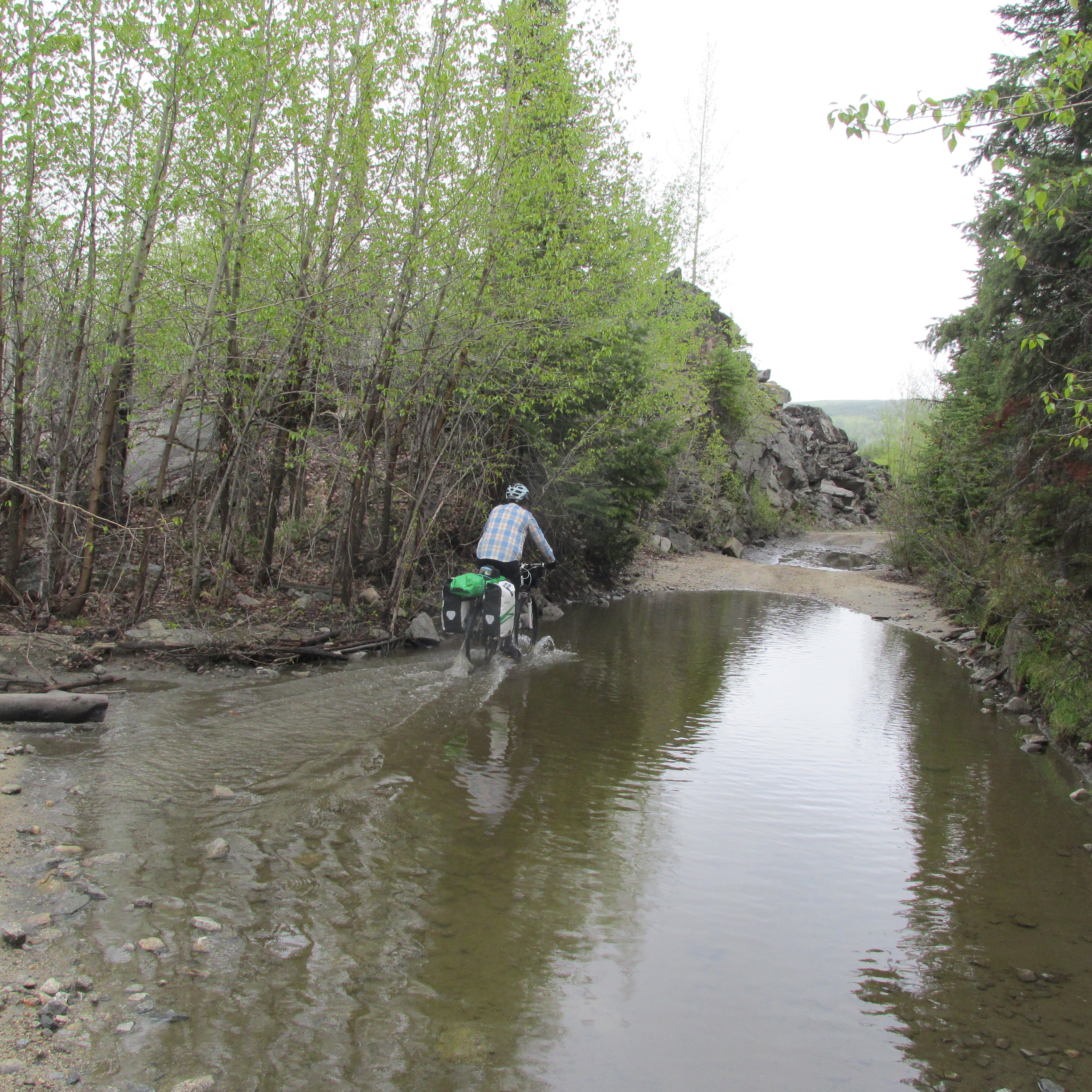 Emily splashing through some of puddles on the KVR. Photo by Elliott Skierszkan. 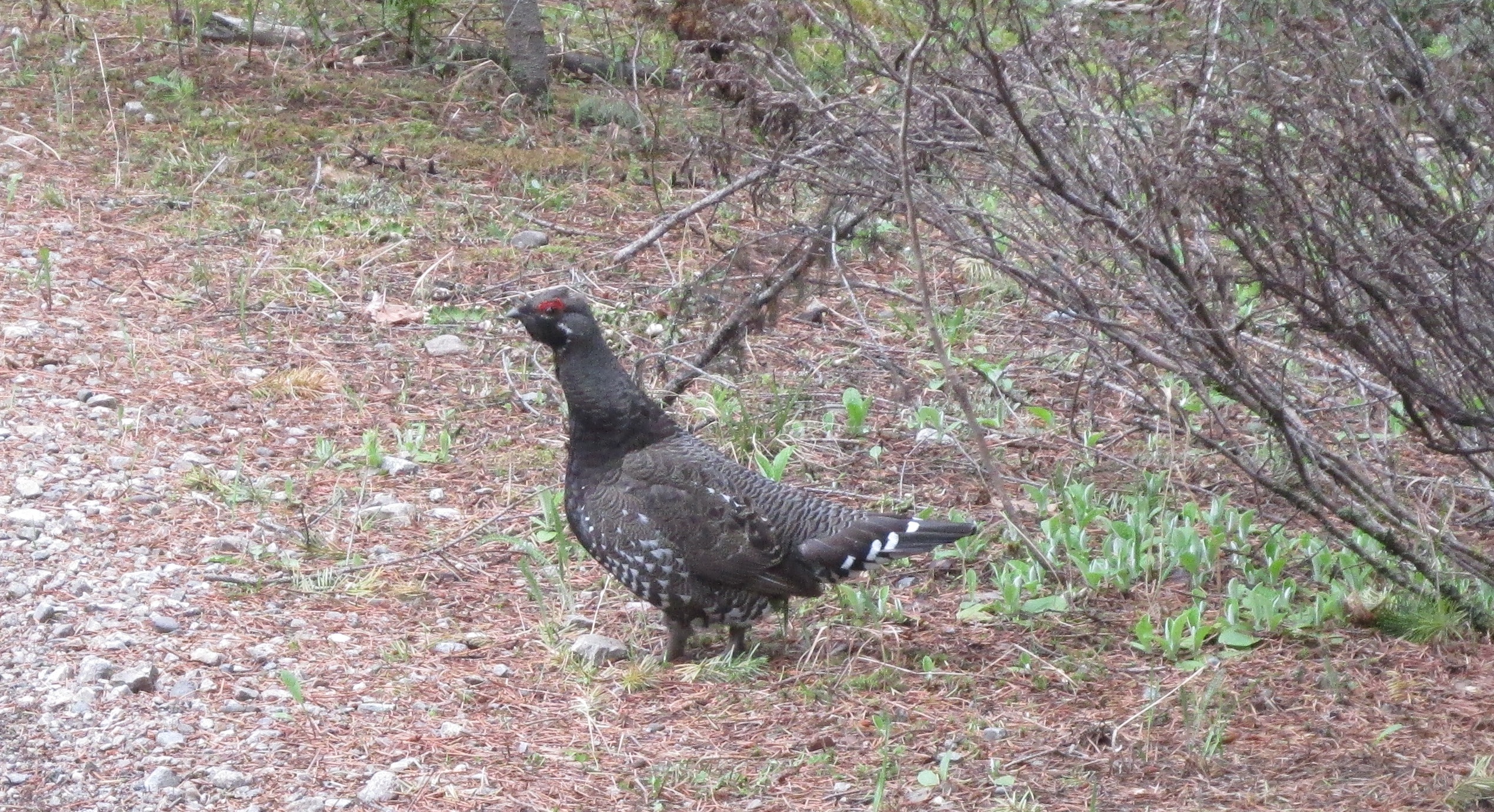 Grouse on the KVR. Photo by Elliott Skierszkan.

The other fun thing about Day 2 is that it was all downhill. In fact, so was Day 3, all thanks to crafty railroad engineers that did everything in their might to keep grades consistent and below 2 % despite the mountainous terrain.

As we gradually descended from the mountains to the Kettle Valley, the landscape slowly transitioned from pine and spruce forest to ranching country. The railroad follows the Kettle River and we enjoyed some lovely scenery overlooking the river’s vivid current and canyons, and passing through farmer fields. To do this trip again, I would have also brought a fishing rod for the numerous lakes and rivers along the way. 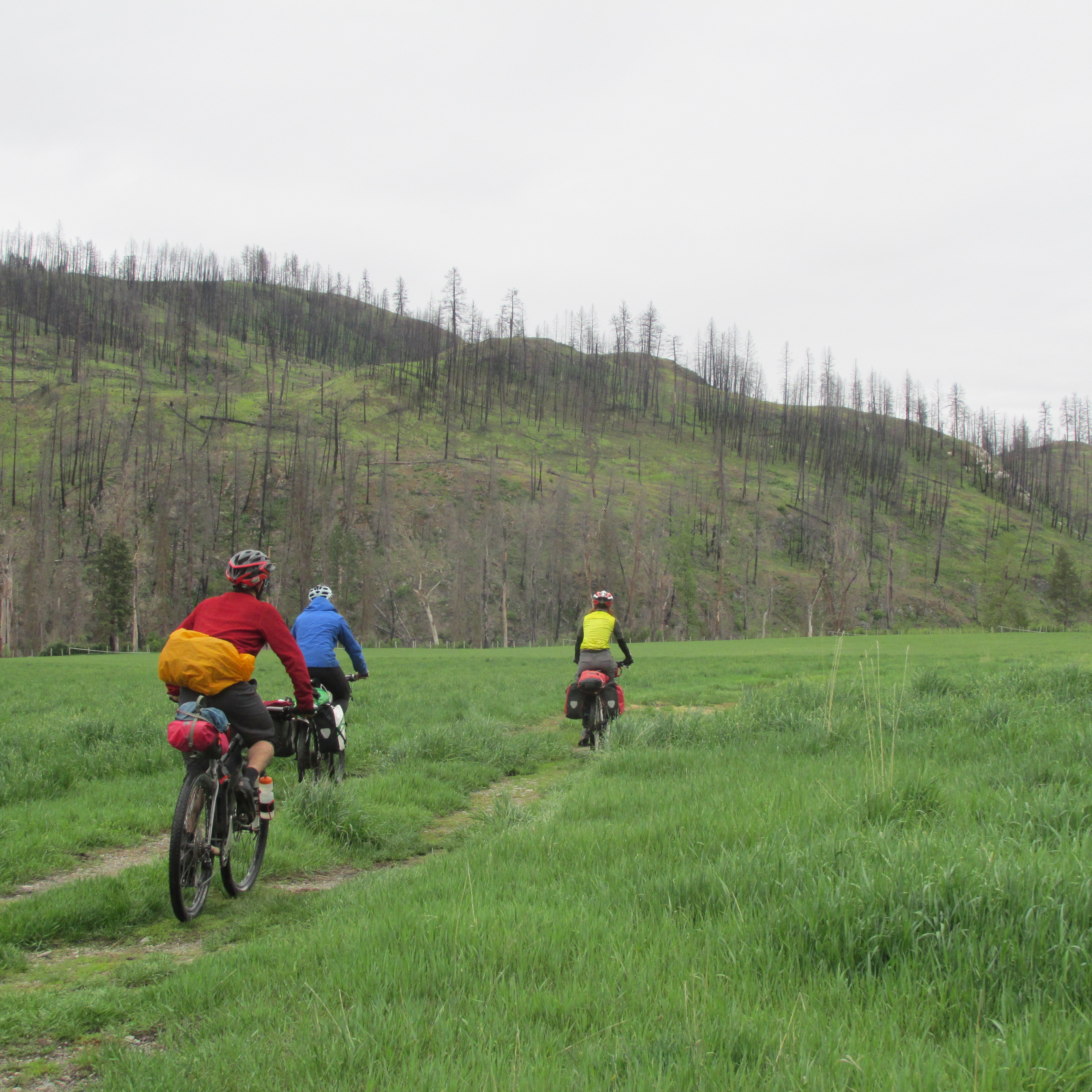 Fun riding along farmfields through the KVR right-of-way. Photo by Elliott Skierszkan.

After a brief re-supply at the General Store in the town of Beaverdell (this store literally sells a bit of everything you might need, from camping gear, to produce, to junk food), we continued south on to Rock Creek, which lies near the BC-Washington Border.

Here, we left the KVR and geared down for a 10-km ride westbound on Highway 3, climbing steeply out out of the Kettle Valley and into the southern extent of the Okanagan Highlands. The highway riding was efficient, but of course noisy, so we were glad to ditch it in favor of a gravel road that climbed up towards the small ski resort of Mount Baldy.

Now a word on Mount Baldy. Its unexciting name is a faithful representation of its statute, as a round, flat-topped bump that you can apparently drive to the top of in the summer. Climbing it might be compared to an ant scaling George Costanza’s bald head (George from the TV show Seinfeld). After a short walk up some steep scrubby side-growth, you end up on the bald and round summit. The major difference between George Costanza and Mount Baldy’s high points is that the latter is also adorned in decorative telecommunications equipment, and on the May long weekend, millions of copulating ladybugs (more on that later).

Nevertheless, Mount Baldy deserves more credit than you might think. At 2,309m, it is actually the highest peak between the Okanagan and Kettle valleys. It has a prominence of 1,099m, so it is much higher than anything around it. It also sounds similar to Mount Garibaldi, which provided another motivator for exploring its bald head. Finally, it was only a 2 km detour from our cycling route to the base of the Baldy ski resort, so it seemed there was ample rationale for an attempt at its summit.

With some enthusiasm, we therefore cycled up steep gravel roads that rose 1,100,m above Rock Creek. Enthusiasm waned somewhat as we cycled past the resort’s lodge onto the cat track, which became a muddy and un-cyclable mess until we were stopped by snow a short way beyond the base of the ski hill. Here, enthusiasm further waned as it began to rain heavily. Alberto and I expended considerable effort at digging trenches around our shelters as the already water-saturated soil overflowed and threatened to drown our sleeping bags in sodden misery. 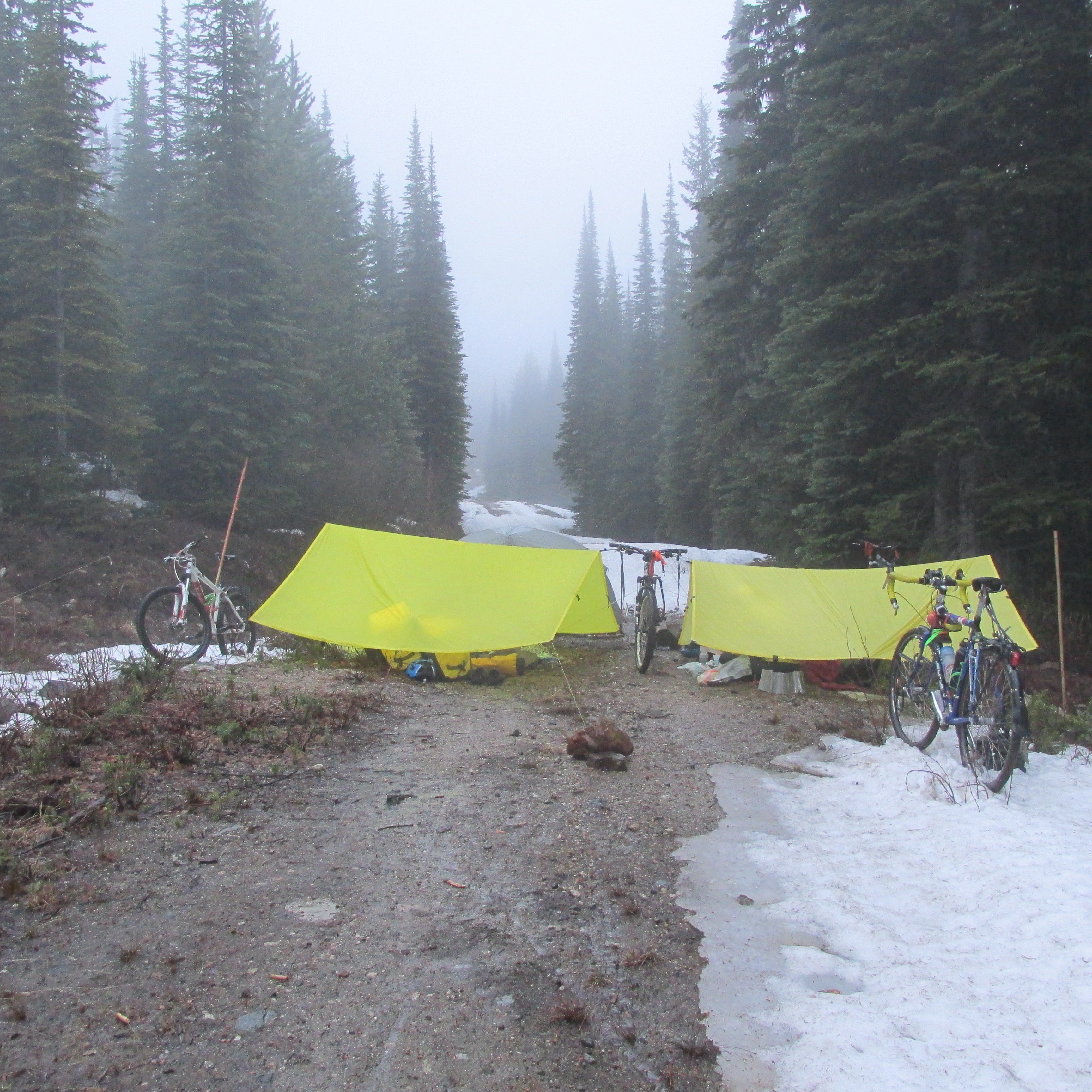 Fortunately, morning dawned clear and our idea of cycling to 1,750 m or so seemed a little less satirical. We enthusiastically began Day 5 making our way towards glory on top of Baldy. Alberto, having brought clipless-pedal bike shoes as his only footwear, decided it would be too difficult to hike up to the summit and so he decided (and convinced Lucy) that it would be more sensible to cycle to the top. Cycling up a black diamond ski run covered in tree stumps and snowpatches inevitaly proved too difficult, so they ended up hiking uphill anyways. However, they had pushed their bikes up such steep slopes that they felt it would be too hard to cycle down, so they also carried their bikes 400m to the top of the chairlift in the hopes of finding a mellower descent line. This tomfoolery left Emily and I quite some time to enjoy views from the top of the lift.

Once we regrouped, we still had a short 200 m climb the true summit, which is not serviced by lifts. This, we accomplished by post-holing through horrible mush. The panorama from the very prominent summit was somewhat compromised by all of the radio towers that grew like pimples on top of Baldy’s head, but I really did appreciate getting expansive views to the deep valleys and peaks all around, a landscape quite unfamiliar to Coastal hikers. 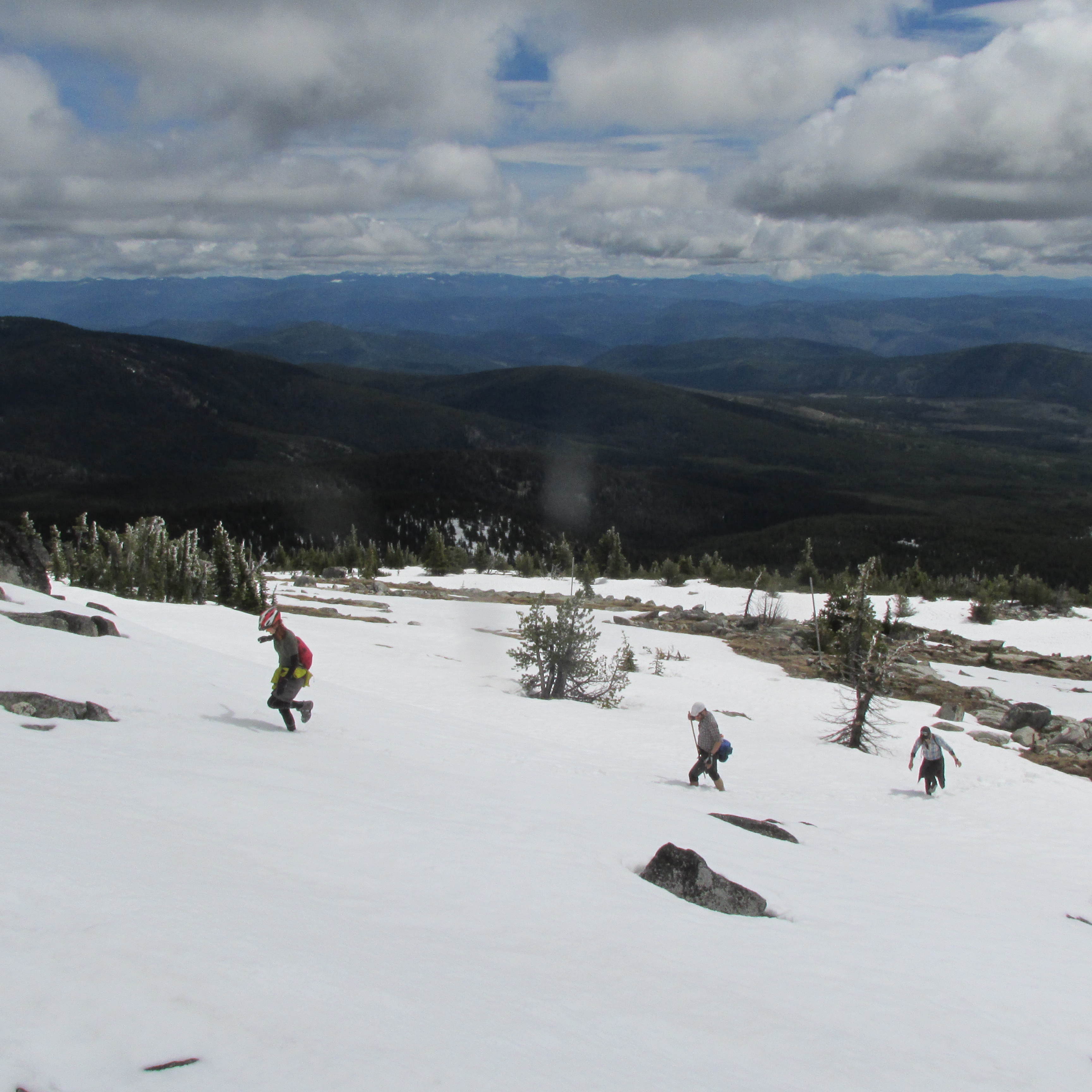 The other neat feature on the summit is that it was absolutely covered in thousands of ladybugs. In a weird phenomenon of nature, these insects migrate to mountain tops, presumably to mate, and were filling every fractured rock on this lumpy summit. 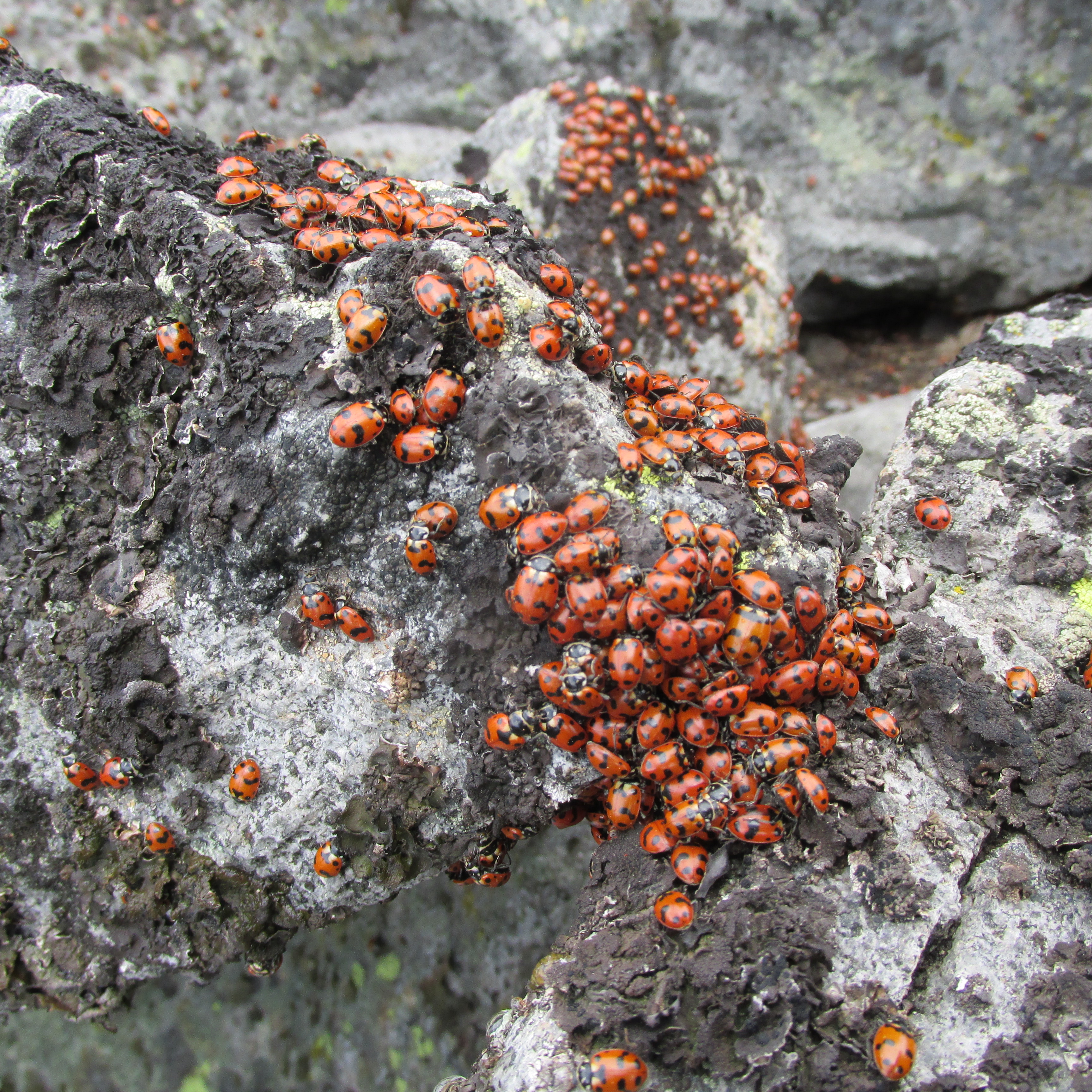 Thousands of ladybugs crawling out of Baldy’s cracks. Photo by Elliott Skierszkan.

After our successful climb, we reaped the rewards with a 2,000 m descent from snow-covered pinnacle of Baldihead to the hot dry desert of the South Okanagan. It was an exhilarating ride, and felt great be in the warm land of sagebrush after our miserably cold camp the previous night. I was also awed by the quantity of songbirds in the Okanagan. We spent night 5 camped under some cottonwoods just north of the town of Oliver. It felt so cozy and also novel to sleep through such a warm night, hearing the desert breeze rustling the cottonwood leaves above and crickets’ creaks in the bushes. I felt I could have been in the middle of Saskatchewan in July, quite the contrast from my usual alpine (cold) camps. 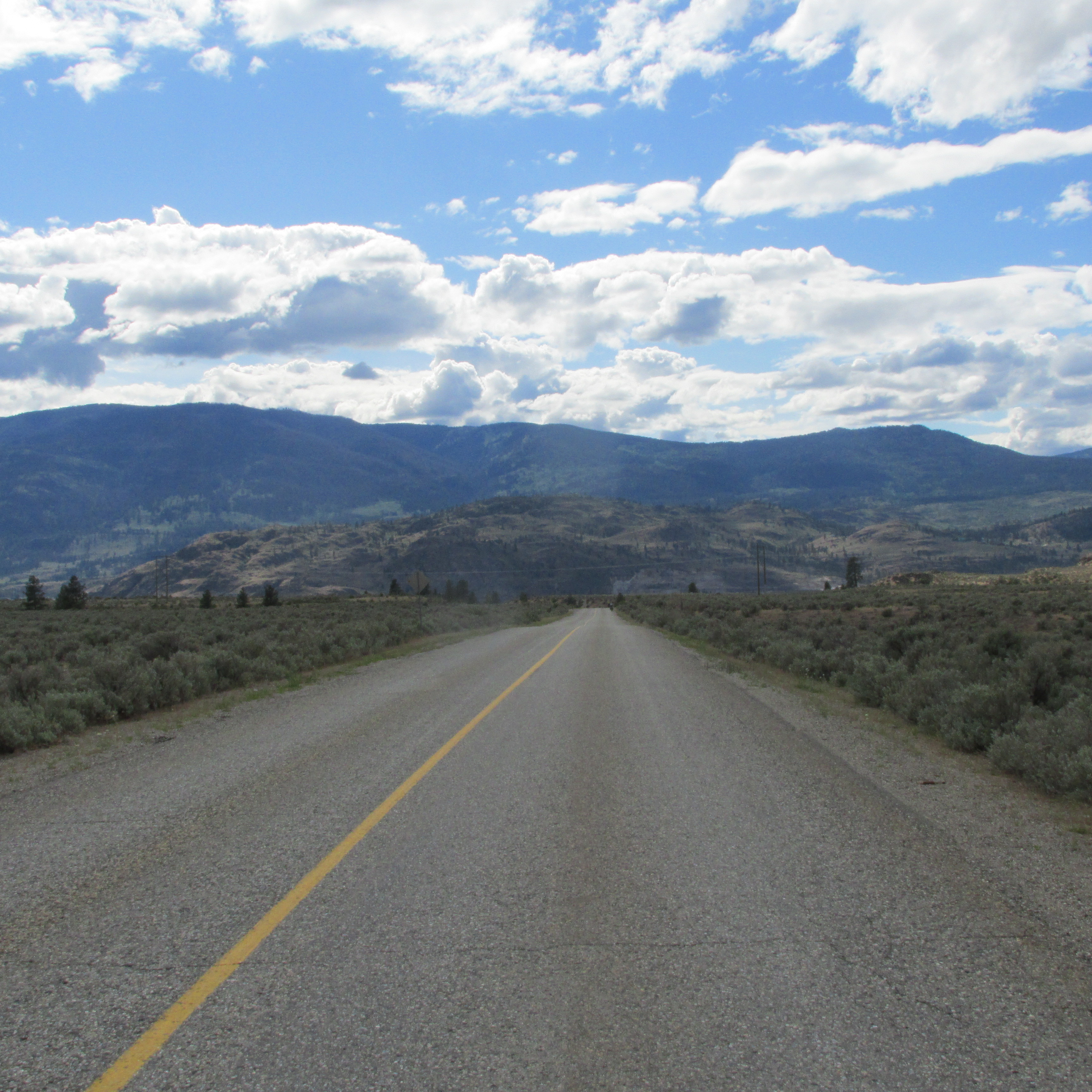 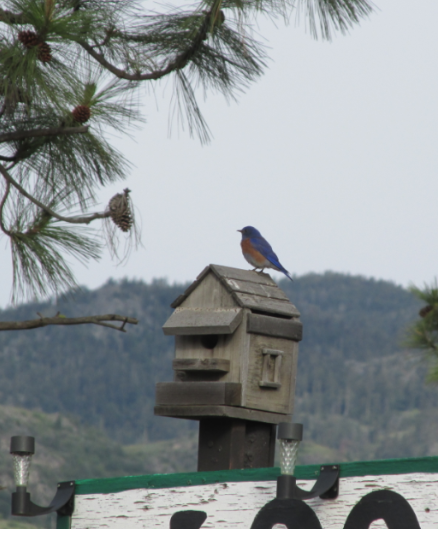 Lots of pretty birds in the Okanagan, including this male bluebird. Photo by Elliott Skierszkan. 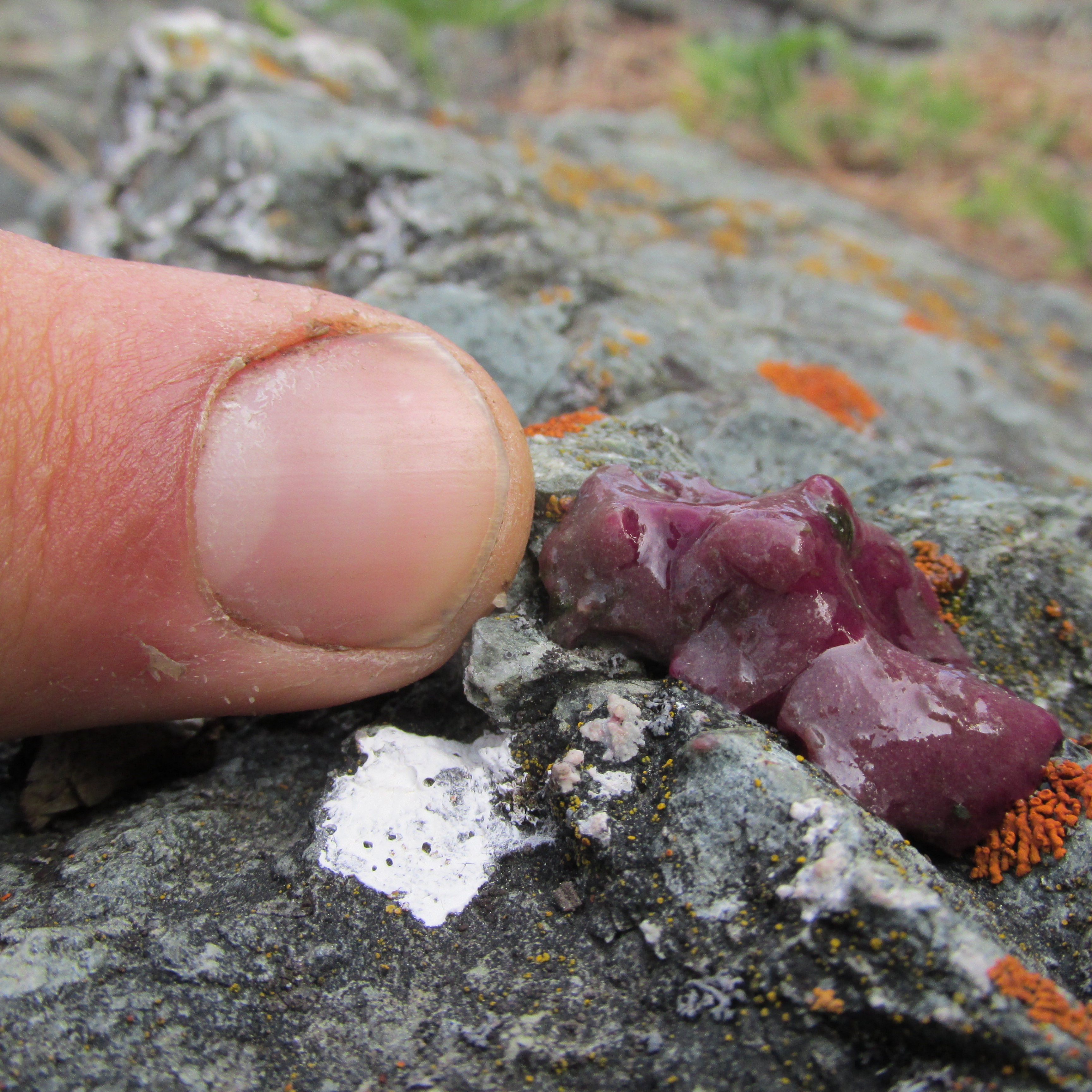 The final day of the trip held some of the best cycling I’ve ever experienced, along quite windy side roads in the Okanagan hills north of Oliver. This was road riding at its best: steep hills, open Ponderosa forests and vineyards, songbirds, no traffic. One highlight was Mahoney Lake, a meromictic (does not turn over) saline lake that contains a deep brine layer and harbors a unique colony of purple bacteria that oxidize sulfide as an electron donor in their metabolism (instead of water, as in most plants and algae).

With all that, we returned to Penticton, fittingly ending the 6-day ride along the old KVR railbed on the shores Skaha Lake. This loop involved some fun off-road cycling but still offered reasonable amenities. While I found cycling on old railroads a bit too flat and a bit too straight for the most exciting bike touring, I loved the absence of cars and we got to know an incredibly diverse region just east of Vancouver. A great plan B when the weather on the Coast is no good! We can also claim to have possibly made a most-circuitous-ever ascent of Baldy, the high knob of the Okanagan Highlands.

-We found we would travel usually roughly 70 km per day fairly casually on the gravel roads.

-We stocked up on food in Beaverdell and Oliver, but carried food for 2-3 days at a time most of the trip.

-I wasn’t sure which kind of bike would be suitable for this trip. Lucy, Alberto, and Emily all rode mountain bikes and did just fine. I only have a Surly touring bike, but I purchased some 700x40c tires (road-bike size tires, but considerably wider and with a slightly knobby tread) and these worked great too. A rough overview of our cycling route.

One Response to The long way to the top: Mount Baldy circumbike-n-hike [Cycling the Kettle Valley Rail Trail]