This trip was inspired by a traverse Nick Elson did on skis during the winter, linking up Sky Pilot and the Mountain Lake area via a north-south ridge system. After a bit of faff setting up a car at Furry Creek and hitching a ride to the Gondola, we set off from the top station at 9:45am. The first bit on the trail was standard stuff. Once we started up the Stadium Glacier, we were in the clouds and couldn’t see much. We had two options for moving south once we reached the top of the glacier. The first one was gaining the Sky Pilot – Copilot col that’s part of the regular Sky Pilot ascent route. The second followed Nick’s track down a gully west of the main col. 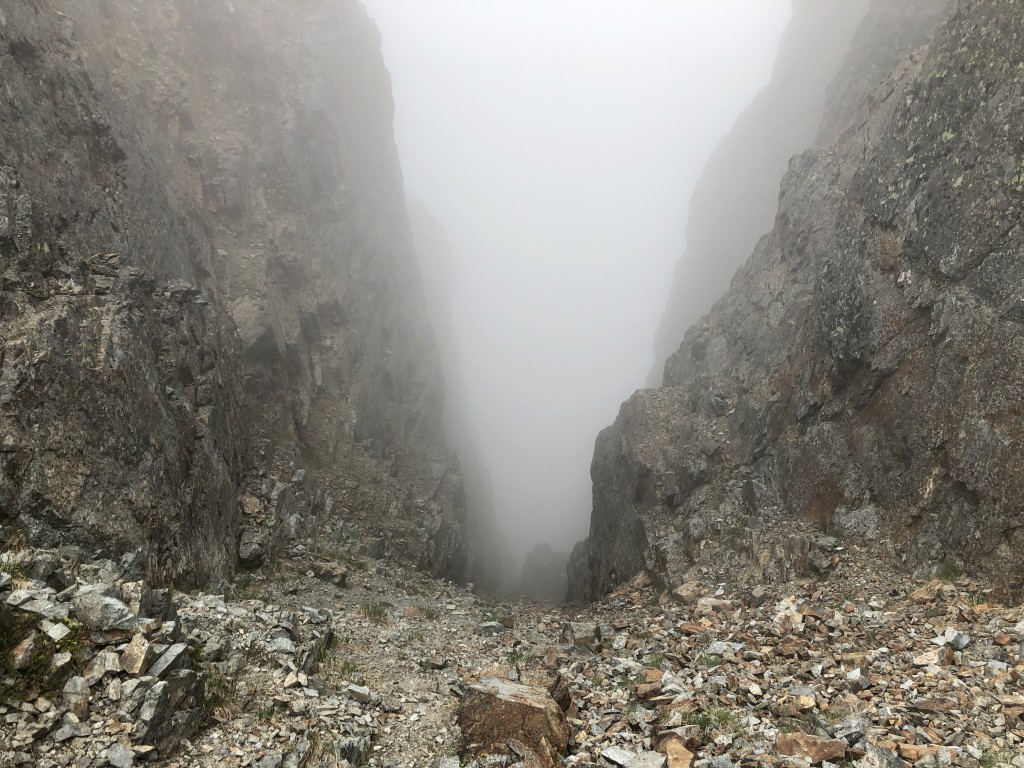 It was long and steep, but looked doable from the top (although we couldn’t see the bottom due to the clouds). We reached the entrance of this second gully at 12:15pm We followed Nick’s track, but soon realized that while this would be an awesome couloir in the winter, it was a chossy mess without snow. In involved some scrambling down a few rock steps, with scree or snow in between. 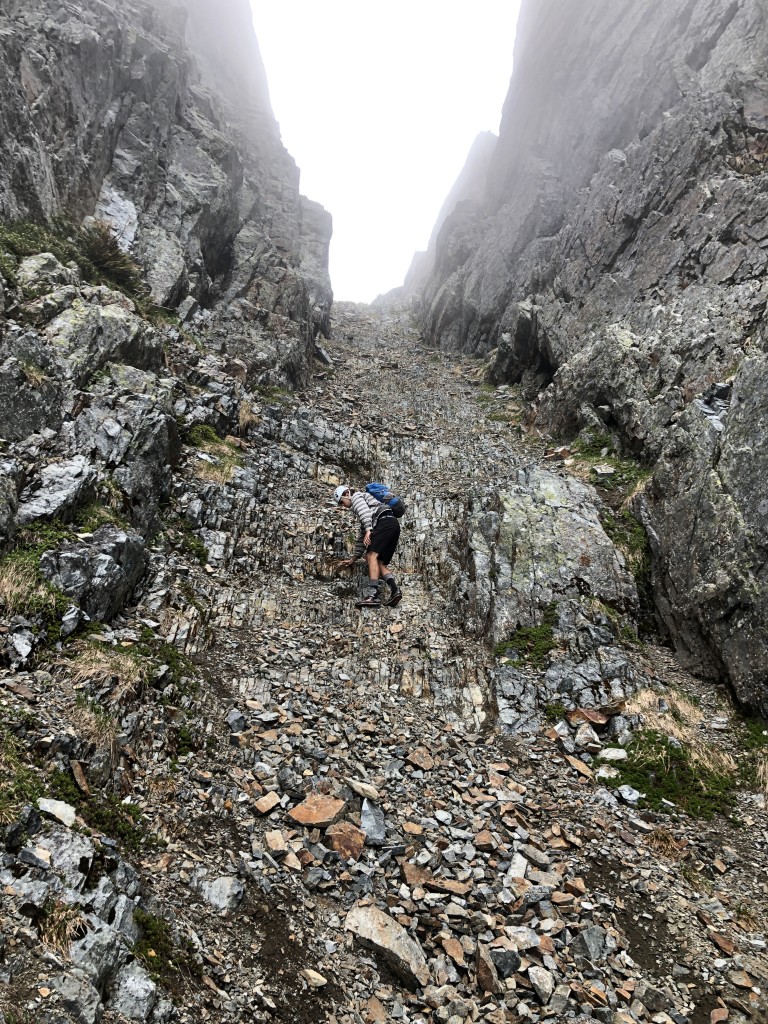 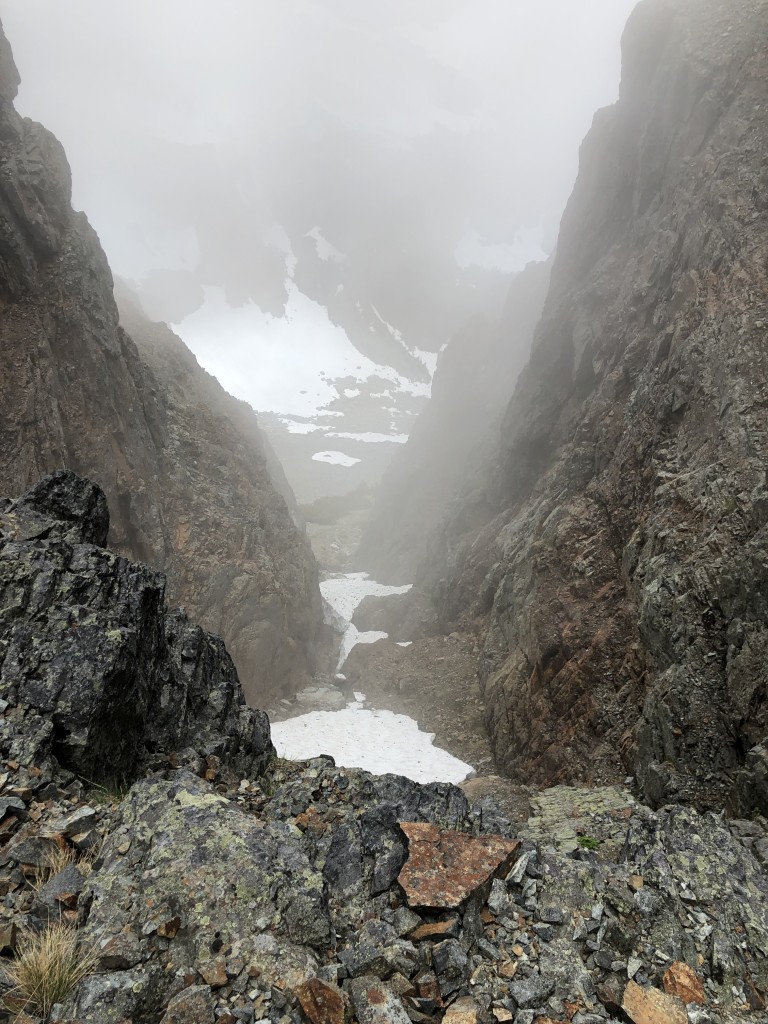 It took us about an hour to get to the bottom. While it was interesting, I would go for the broader slope going south from the main col next time (if I was still on foot).

The clouds didn’t budge and we moved by GPS to gain the ridge system that would connect to Mountain Lake. Visibility was about 100m. Moving along the ridge was quite the march, since we didn’t have enough visibility to get a feel for the microterrain. There are many bumps and small bowls along the route. With better visibility, it would be easier to decide whether to avoid or climb over features. Instead, we wandered and frequently checked the GPS, often having to smash through blueberries and scramble to get back on track. There were many snow fields still remaining around Mount Sheer, from which meltwater made the bare rocks slippery. I had a decently-scary slip and short slide on some rocks.

We reached Mountain Lake hut at 6:00pm. I figure it would take much less time if taking the easier way down from the Sky Pilot-Copilot col, and with better visibility to properly navigate the microterrain. We were cold and tired, so we agreed to turn on the propane heater. I was impressed with the whole valve lock and timer setup. In less than an hour, the hut was comfortable.

The next morning was gloriously blue. 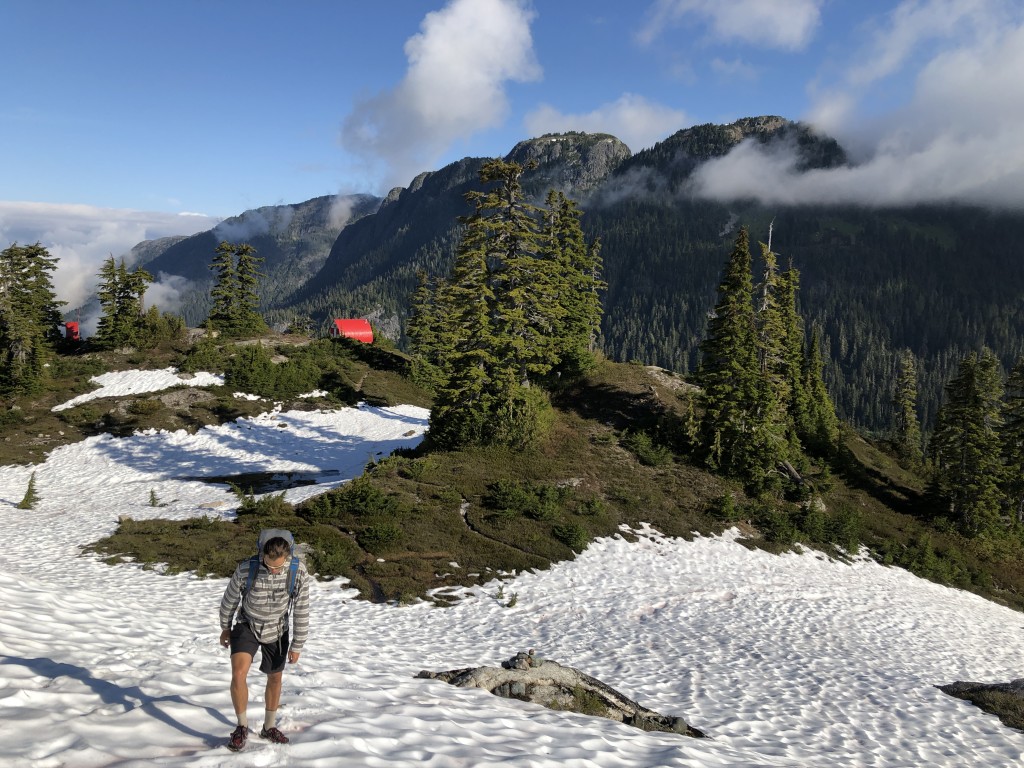 We could clearly see Sky Pilot and the ridge system we’d traveled. I definitely want to redo this trip with better weather to truly appreciate the route and bag some minor summits in the Mountain Lake area. The way down was marked with cairns and flagging. There are many swimming opportunities once the snow melts. A nice trail leads down to the valley and the Furry Creek Main.

The road is in awesome shape and it’s really too bad that access is now limited to official BCMC trips, due to the gate at the very beginning of the road. For regular plebs, it’s a slog. Near the bottom third or so, we noticed that branches to the south had big piles of rocks and debris blocking them, but the road beyond looked like it was drivable. We later learned that there are two mains in the Furry Creek drainage, which have had all connecting branches barricaded. They are separately gated. It looks like they might connect somewhere along the top half of the valley. We didn’t learn this fact by researching unfortunately. The previous day, I had driven to a gated road which started on Sea View Drive, the local road that goes under highway 99 and connects the northbound and southbound highway exits. I’ll refer to this as the South Furry Main. We had been walking along the North Furry Main and reached a different gate. This is the road seen from the very top of the big Furry Creek hill on hwy 99. So, we had to do the walk of shame along the highway shoulder to reach my car parked at the south main gate. We gained a sense of appreciation for how long the hill is when you have to walk down while bewildered motorists rip by you. We finished at 4:30pm.

One Response to Sky Pilot to Mountain Lake traverse